Elon Musk and his teams just can’t seem to stop winning. The momentum is incredible, and it’s a lot of fun to watch.

Clearly, the Boring Company’s success with the 1.7-mile loop under the Las Vegas Convention Center was the key to getting the approvals in place. The two tunnels and three stations were constructed for just $47 million, reducing a 45-minute walk down to just two minutes.

It’s not hard to imagine the company doing that for the entire city of Las Vegas:

Map of the Vegas Loop 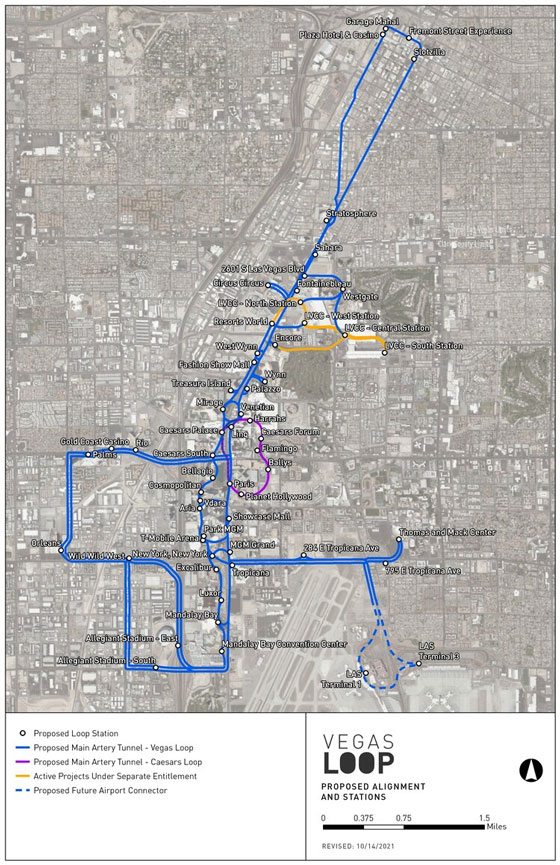 The Vegas Loop will link the convention center to the casinos along the strip, the McCarran airport, the stadium, and downtown Las Vegas. And the longer-term plan is to link the entire system to Los Angeles.

In Vegas, there will be 29 miles of tunnels, 51 stations, and the capacity to support an impressive 57,000 passengers per hour.

But here’s the best part… No taxpayer dollars will be used for the project.

Incredible, right? It’s almost unheard of for something of this scale that looks like a public works project. Yet Musk and the Boring Company have the ability to raise the capital to take on a project like this based on the demonstrated success to date.

And to avoid any concerns that the Boring Company might gouge consumers on prices, the company has already provided guidance on both transit times and fares for the rides. Very smart.

Fantastic. It’s faster, better, and cheaper than a taxi. And it will dramatically reduce traffic on the surface roads.

And after what we are already seeing with Tesla’s full self-driving version 10 software, it is easy to imagine massive fleets of Tesla’s autonomous electric vehicles whisking through the tunnels emissions-free, completely safe, and for a fraction of the cost of a taxi fleet.

What a move! Musk is creating more demand for Teslas through The Boring Company, redefining the future of transportation, and solving major public works problems all at the same time.

Faster than the ink could dry in yesterday’s Bleeding Edge, Tesla’s enterprise valuation smashed through the $1 trillion ceiling on the back of the announcement made by Hertz. Now the valuation multiple is even more out of reach at 22.4 times sales. This is not a good level to be investing in Tesla.

And the Boring Company and SpaceX are still private companies.

So while we wait for Musk to take his private companies public, I have a company in the electric vehicle (EV) space that presents the same kind of growth opportunity that Tesla did years ago.

And large gains may come even more quickly as I believe the company will be a logical buyout target. If you’d like to learn more, please go right here.

This is a fun and somewhat unusual project. It’s an impressive non-fungible token (NFT) launch. This is such an interesting project.

The new project is called The Greats. And it is a series of NFTs that are digital recreations of the historical piece titled Salvator Mundi.

We talked about this piece last month. Salvator Mundi was created by famed artist Leonardo da Vinci between the years 1499 and 1510. And it sold for a record $450 million in November of 2017. The prior record for a physical piece of art came in 2016 from a Rembrandt painting that sold for $195 million.

What makes the project somewhat unusual and quirky is that The Greats is being spearheaded by notorious art forger Wolfgang Beltracchi. His claim to fame is that he earned about $45 million over the years by forging famous artwork that he passed off as real. This required him to fool hundreds of the world’s top art experts.

Ironically, NFTs solve the forgery problem because they allow each piece of art to be cryptographically and immutably secured on a blockchain. Everyone can see that it’s the original work.

Beltracchi’s new NFT series will consist of exactly 4,608 NFTs. They will each be verifiable on the blockchain so that nobody can create a new NFT and claim it is part of the series.

Here’s a snapshot of a few of Beltracchi’s Mundi recreations: 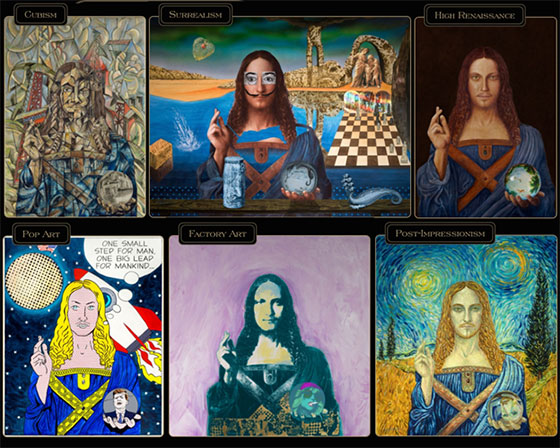 It’s easy to see how these NFTs will be highly sought after. Beltracchi is a great artist.

And what makes this launch so interesting is that it will pioneer some advanced blockchain technology.

Each of these NFTs will be part of a random auction. Buyers will sign up to purchase an NFT, but they can’t choose which one. Instead, they will receive a random piece from the collection of 4,608 NFTs.

To pull this off, the launch is utilizing Chainlink’s verifiable random function (VRF) technology. This tech ensures that buyers can’t know which NFT they will get in advance.

This randomized approach may seem strange at first, but there’s a critical reason for it.

Inevitably, some of the NFTs in this collection will be far more valuable than others. If buyers were able to bid on each specific piece of art, the wealthiest buyers would be able to outbid everybody for those considered “the best.”

Chainlink’s tech solves this problem by giving everyone a fair shot at the most valuable NFTs. It’s a great feature.

And each user can only bid on one of the 4,608 pieces as well, which prevents any single person from gaining an advantage by purchasing large numbers of the NFTs.

The Greats’ launch will also use live data and analytics technology from a blockchain project called The Graph. This will allow buyers to experience the auction in real time. They can watch as each piece of artwork is sold one by one.

These two features – the randomization and the live data feed – create a gamification aspect to this NFT launch. They will make it fun to participate.

So I think this approach will catch on in the NFT industry. The Greats is pioneering a model here that will be adopted for future launches.

And that brings us to the pricing…

However, it’s a Dutch auction. That means the price will drop at regular intervals. It will continue dropping until the final bid is received. That will be the final price of all the NFTs, down to a minimum price of 3 ETH per NFT. That’s just over $12,000.

In other words, some buyers may place bids at the opening price. After a set period of time elapses, the price will drop – perhaps all the way to 100 ETH, eventually. Additional buyers might place a bid at that price.

Then the auction continues until the final NFT is sold – say, at 10 ETH. Everyone, even if they bid at a higher price, would pay only 10 ETH for their NFT purchase. Any amounts above the final price will be refunded.

I’m very curious to see what the final number is at the end. Given how hot the NFT trend is, I suspect it will be well above the floor price.

And if any readers want to learn more about investing in the NFT space, I encourage you to go right here for more details.

Another breakthrough in functional robotics…

A team at MIT just revealed what they call the RFusion robot. This represents a major advancement in functional robotics.

We have talked before about robotic arms capable of moving and picking up objects and packages. This technology is being deployed in warehouses, logistics facilities, and even scientific laboratories.

However, up to this point, robotic arms have needed to “see” their targeted objects with computer vision in order to pick them up. That’s a limitation. What happens if the object is covered up or lost?

Well, the RFusion robot solves that problem. It incorporates computer vision, wireless technology, and artificial intelligence (AI). This allows it to find the desired item even if it’s not immediately visible.

Here’s a shot of the robot in action:

Here, we can see the robot locate the general area of its target object. Then it begins moving other objects out of the way until it finds what it’s looking for – a pair of keys in this case.

The keys were outfitted with a cheap RFID (radio-frequency identification) sensor. To find their general location, the robot sent out a signal that the RFID chip responded to. This allows the robot to focus on a specific location, in this case a bin of goods. It then removes other objects from the pile one by one until it finds the keys.

What’s powerful about this is that these RFID sensors cost just a penny or less. That means these sensors can be placed on pretty much anything and everything. That would make this RFusion robot functional in any setting.

Naturally, this would be valuable in logistics and distribution facilities. Robots would be able to locate packages in the warehouse even when they aren’t in plain sight.

And I think this could be even more useful in a consumer setting.

I’m sure most of us have misplaced our keys or our cell phones before. It can be a stressful experience, especially if we are in a hurry to get out the door.

Well, instead of having to retrace our steps, what if we had a home robot that could use this technology to find the missing item almost immediately? I think that’s a product that would do very well.

So we’ll keep an eye on this RFusion Robot. I’m interested to see which organizations step up to commercialize this technology.

The convergence of AI and precision medicine continues…

Researchers at the Howard Hughes Medical Institute just made an incredible breakthrough.

The team combined a form of AI called machine learning with high-powered microscopes to map an entire cell in just hours. For perspective, it’s estimated that it would take a human 60 years of manual work to produce this same cellular map.

What we are looking at here are structures within a cell. In fact, there are 30 identifiable organelles in this model. Just mapping them out in such high-resolution 3D is an incredible feat.

What’s more, this technology enables us to see how these organelles interact with each other. That’s never been possible before.

And here’s the best part – the research team open-sourced this technology. That means all the data, the software code, and the AI models are available for anyone to work with. Other research teams are free to take this technology and apply it to their own work.

So this will be a game changer when it comes to therapeutic development. These cellular maps will provide insights that inform the development of therapies for all kinds of diseases that have been untreatable up to this point.

This is one more example of the incredible work happening at the convergence of biotechnology and AI… We’re going to see more and more amazing developments as these technologies help us refine therapies with greater speed and accuracy.

And that means there are also huge investment opportunities here. If any readers want to know my top recommendation in this space, you can find the full story by going here.