What a disaster. Yesterday was ugly.

We’d have to have been hiding under a rock to have not heard that the consumer price index (CPI) came in much higher than expected – 8.3%. Needless to say, this is not good… but sadly, it’s not surprising.

In the absence of major changes in both economic and monetary policies, we should expect persistent inflation.

While the headline number of 8.3% was all the talk yesterday as the stock markets collapsed, very few were actually looking into the real drivers behind the number – and that’s where things get a lot more interesting.

That’s because almost every category that contributes to the CPI number increased in August. But two line items stood out: gasoline and fuel oil, which both materially declined. The price declines in both categories were so significant, that without those declines, we would have had even higher inflation than we had in June… well above 9%.

Why is that? What is driving down the price of gasoline and fuel oil?

It’s simple, the U.S. government is emptying its strategic petroleum reserves at a record pace never before seen in history: 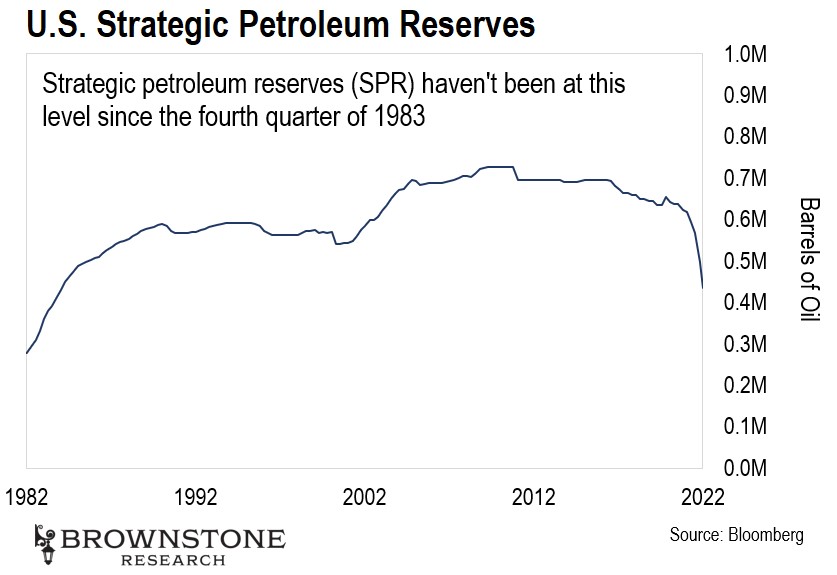 The strategic petroleum reserves (SPR) haven’t been at this level since the fourth quarter of 1983. And that was a time when the U.S. was still building its reserves.

At the end of September last year, when the “oil letting” of the SPR began, the reserves stood at 618 million barrels. And the ransacking really kicked into high gear this January.

By the end of last month, the reserves had been depleted down to 442 million barrels. That’s almost a 30% decline in a matter of months.

And that’s precisely why the CPI numbers weren’t much worse. Between January and August alone, 146 million barrels have entered the market. Of course, that is going to have an impact on the price of gasoline and heating oil. Not as much as we’d like, but the prices will, and have, declined a bit as a result.

This is the story behind the story – it’s how the CPI numbers are being “goosed.” The decline from 8.5% to 8.3% isn’t a victory… It’s artificial. And it’s not sustainable.

After all, if this pace were to be maintained, and another 146 million barrels are taken from the reserves, the U.S. will be at dangerously low levels. And once the U.S. runs out of reserves, or simply stops ransacking the SPR, prices are going higher again in the absence of dramatic changes in economic and monetary policy.

What’s even more concerning is that we all know that the real inflation numbers are far higher than what the CPI presents. In the last year or so, gasoline has more than doubled, food costs have skyrocketed, and what we’re all paying for electricity has gone through the roof.

How can we trust the official CPI numbers? They just don’t make sense. And they’re not consistent with what we are seeing and feeling in the real world. And I’m afraid the trustworthiness of the CPI number is going to get worse.

The U.S. Bureau of Labor Statistics (BLS) announced that starting January 2023, it will be changing the way that it calculates the CPI. The below image is taken directly from the BLS website:

In plain language, this is just another way to make the CPI look less bad than what it really is. It also tells us that they know the inflation that we’re seeing now will be persistent in 2023, so they are preparing for adjusting the weightings now.

We should plan accordingly. There will still be market rallies which we will be able to take advantage of. But it will be smart to use defensive investing strategies that are either protected from the volatility in public markets, or those investments that have little to no downside risk, while still maintaining large upside profit potential.

If you’d like to learn more about one of the best investment strategies that will do exactly that, please go right here…

An unexpected, and unwelcome competitor…

Artificial intelligence (AI) is creating controversy in the art world.

Earlier this month, the Colorado State Fair held an art competition. And the piece that won the “digital art” category opened up a new debate… That’s because the “artist” who won first place was actually an artificial intelligence (AI). More specifically, the human that submitted the work of art used AI software called Midjourney to generate the piece.

Here is the winning submission: 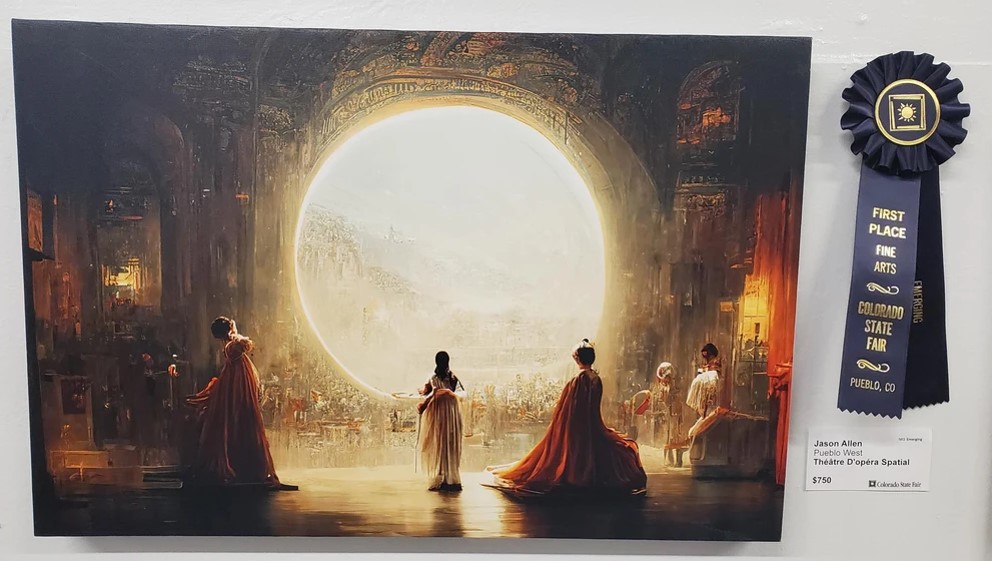 This is a stunning image. We could easily imagine this blend of futuristic and baroque art on the cover of a sci-fi bestseller or movie poster.

It’s remarkable that an AI created this – it has incredible depth, colors, intricacy, and framing.

However, not everyone shares the same enthusiasm for this piece. Many in the art community were upset and complained it was unfair for AI-generated art to win first prize.

This is understandable. Many artists fear that AI-generated art will destroy their own value and careers. And they view its use in a competition like this as cheating.

Yet the critics are missing a critical piece of the puzzle…

To create his entry, artist Jason Allen had to craft a prompt that told the AI what he wanted it to do. And this prompt wasn’t a matter of stringing a couple of words together and calling it a day.

He is defending his process, saying it took weeks – and hundreds of iterations – to fine-tune a paragraph-long string of words and instructions to achieve the final result.

So this isn’t an easy feat. And this winning artwork was the creation of someone with innate artistic ability.

That said, this is a clear demonstration of how advanced AI is becoming… and the technology’s broad-ranging applications.

Even those who lack the artistic ability to design and produce art will be able to use these tools. This will be extremely useful for branding and marketing for companies. Employees can use AI to create rich visuals for business, gaming, entertainment, or fun – even without formal training.

So this is a valuable tool. And I suspect over time, more artists will realize it isn’t taking the value away from their work… but instead is giving them another medium for enhancing it.

A marketplace for AI prompt creators…

Our second story today continues on a similar theme… because AI prompts can help us create more than just fine art.

In the last few months, a new marketplace has popped up for AI prompts, appropriately called PromptBase. Creators are selling text prompts for generative AI software, like Midjourney, on PromptBase’s website:

As we can see in the image above, people can request or sell a prompt with ease. This can include visuals like logos, icons, concept art, T-shirt designs, and more. And it also includes items like generating text for emails, headlines, and articles.

Again, the prompts aren’t as easy as stringing a couple of words together. They can be incredibly detailed in order to get a compelling and desired result.

AI prompts require a mix of creativity and wordsmithing that may look and feel a bit like coding. Engineers know how to use a particular string of words in the right order… And they know how to “weight” a certain characteristic to produce the intended aesthetic.

For example, they can give a half or 1.5 weighting to a given characteristic to produce a different output.

Do we want a close-up image? Maybe slightly panned out? Should the lighting be bright, dark, or cinematic? Is this image landscape or portrait? There are actually a lot of decisions to refine the output.

All aspects of the image are taken into consideration. And prompt engineers specialize in creating the right instructions for the desired output.

And here’s the thing – purchasing these prompts is not expensive. Each costs between $2 and $5.

And once someone buys these inexpensive prompts, they can modify them. By changing weights, adding characteristics, or altering lighting, we can adjust the purchased prompt until the result is our own creation.

So we’re about to see this adoption of this technology explode. We now have several generative AIs in the market like GPT-3, Dall-E, and Midjourney to choose from.

And with the low price point, I expect businesses and even individuals will soon start putting this incredible technology to use. That’s going to put PromptBase in a category-defining position.

For our final story today, we’re focusing on something much more human. And it’s wonderful news in the fight against Parkinson’s disease.

It all started when retired Scottish nurse Joy Milne noticed that her husband’s scent had changed. She noted a “musty, rather unpleasant smell, especially around his shoulders and the back of his neck, and his skin definitely changed.” That may elicit a chuckle from some of us, but what she smelled wasn’t just body odor…

She didn’t know it at the time, but it was 12 years later that her husband’s symptom’s progressed and he received a Parkinson’s diagnosis. She connected the dots when she went to a Parkinson’s support group and noticed the smell among others.

Parkinson’s is a tremendously awful neurological disease that causes tremors, rigid muscles, and loss of automatic movements. And its symptoms worsen over time. It’s a crippling condition that has no cure.

Unfortunately, her husband passed away in 2015. But in the time since then, she’s been working with researchers in Manchester. Using her observations, researchers started analyzing compounds on the skin of the back and shoulders.

Until this research, there has been no chemical test for Parkinson’s. That leaves thousands of people on neurological consultation waiting lists for early detection. So there is an immense need for this test.

Rather than waiting months or years for a diagnosis, people will be able to be diagnosed years before symptoms present, and possibly make adjustments to improve their condition.

While the research is still undergoing validity checks in the lab, they’re aiming to start rolling out the test to the market within the next two years. Assuming the test receives approvals from regulators around the world, it will have a dramatic and positive impact on the Parkinson’s community.

And keep in mind… This discovery came from the human sense of smell – not an AI or supercomputer.

But with recent advancements like DeepMind’s AlphaFold AI, we could see that begin to change quickly. Identifying a larger population of those with Parkinson’s, years before symptoms present, will allow for genetic sequencing of those patients in hopes of providing more insight into the disease, and ultimately a potential cure.