Yesterday, the $737 billion Inflation Reduction Act was signed into law.

There’s one problem though… it has nothing to do with reducing inflation.

Last month, the University of Pennsylvania performed a detailed analysis of the Act and summed it up perfectly:

“The impact on inflation is statistically indistinguishable from zero.”

Also of interest is that the Act proposes to reduce non-interest cumulative deficits by $300 billion, yet U. Penn’s estimate is $52 billion lower, at $248 billion. One might think “not too far off, what’s $52 billion give or take?”

We’ve become so desensitized to the concept of billions – or even trillions – of dollars of spending. But $52 billion is roughly on par with the gross domestic product of a beautiful country like Croatia.

But there’s a rub. Part of the act provides for $64 billion in new spending to extend the Affordable Care Act. If those subsidies are made permanent, the 10-year deficit reduction dramatically falls to just $89 billion. That’s only 30% of what we’re being told.

Modern monetary theorists (MMT) will tell us that debt doesn’t really matter. Apparently, to them, we can print and spend as much as we like without repercussions. Yet, just the smallest bit of common sense tells us that simply isn’t true.

What household, corporation, or even non-profit organization can borrow and spend recklessly without repercussions? The only difference is that a government can get away with it before it becomes a terminal problem.

That time is now – we can all see it, and feel it, in the cost of goods and services. Inflation has caused prices to skyrocket, impacting everyone, and causing major changes in our household budgets.

Curious how the U.S. government has been spending year to date? Here’s what its budget looks like: 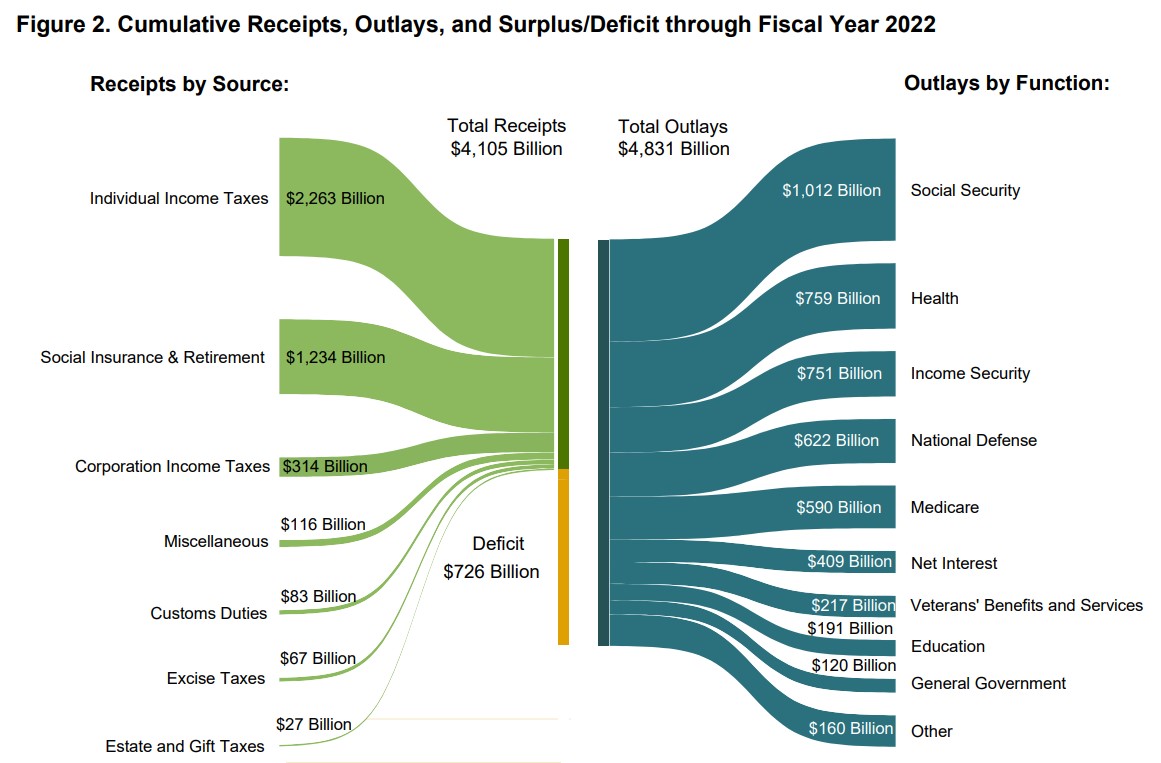 Source: U.S. Department of the Treasury

The U.S. is already running a $726 billion deficit through July. And there is one thing that almost no one is talking about right now… Individual income tax receipts are on a rapid decline.

This is the largest single contributor to government funding. The reduction in full-time employment and shift towards part-time employment, combined with a rapidly declining labor force participation rate, means less revenue receipts to the U.S. – and ultimately an even larger federal deficit.

It’s clear 2022 will result in a trillion dollar-plus deficit, and that means only one thing… the Federal Reserve is going to have to print more money to cover the record high deficits.

And printing trillions more dollars will result in two things… the further devaluation of the dollar (and thus our savings), and continued inflation.

Maybe we should call it the Inflation Continuation Act of 2022.

Google’s AI division, DeepMind, just announced what may be the most important breakthrough in the history of biotechnology.

DeepMind has published the protein structures of more than 200 million proteins. This is basically a catalog of nearly every known protein on Earth.

I cannot overstate how remarkable this is.

I remember just a few years ago talking about how protein folding was one of the most difficult challenges to tackle in science.

That’s why it was so exciting when we shared that DeepMind’s AlphaFold AI could predict how proteins fold with over 92% accuracy, back in December of 2020.

As a reminder, a protein’s structure tells us how it will impact living organisms, including humans. The structure also determines what other compounds (such as pharmaceuticals) the protein can bind to.

So that alone was an incredible breakthrough. It shocked the scientific community.

And now DeepMind has solved the problem entirely.

Make no mistake about it – This changes everything with regard to drug design and development. It is the equivalent of giving the textile industry looms so that fabrics could be mass-produced. It’s a tool kit with profound implications that will touch every aspect of therapeutic development.

In less than two years, AlphaFold has successfully cataloged nearly every protein known on Earth. For context, determining the structure of just one protein was something that used to take years.

Yet DeepMind’s AlphaFold just made this as easy as doing a simple web search. No kidding. Have a look at me searching for an individual protein structure:

There it is. That’s how easy it is to find the structure of all known proteins on Earth.

The implications for the biotechnology industry are almost hard to fathom. This isn’t just an inflection point… It’s a step function. DeepMind just solved one of biology’s grand challenges and unleashed this discovery on the industry. It is open source and available to everyone.

Equally important is that this information is immediately actionable. Every biotech company can make use of this information regardless of whether they have a therapy in development or are still in the drug discovery stage.

This is a gold mine that will lead to industry breakthroughs at a pace we’ve never seen before. And institutional capital that invests in the biotech industry will understand this.

I continue to think biotech will be the top-performing sector of the year.

The father of the metaverse is building his own world…

Neal Stephenson, who first predicted the metaverse decades ago, just announced he is building a blockchain that will power a new metaverse. It’s called Lamina 1, which means “layer one” in Latin.

For readers who may not know, Neal Stephenson is one of my favorite science fiction authors. He wrote a number of fantastic books that predicted future technologies with astonishing precision.

And his book Snow Crash, published in 1992, first envisioned metaverses. This book is absolutely required reading for anyone interested in the burgeoning metaverse trend.

What’s so exciting here is that most metaverse development has come from the tech side up to this point. In fact, Facebook rebranded its entire business around the trend.

But we haven’t seen much influence from visionaries like Stephenson yet. That’s why I’m excited about Lamina 1.

Stephenson is bringing a creative force that will shape the design of an open metaverse. He describes it as a metaverse that privileges creators, not big tech companies. It’s a metaverse much closer to his original vision.

We don’t have much information about what the metaverse itself will look like yet… Stephenson’s team is focused on building out the base layer blockchain for Lamina 1 first. But I do know that I want to keep track of this project. This could become one of the most exciting metaverse projects to emerge from this torrid pace of investment.

It’s been a lot of fun to watch Apple quietly drive Project Titan forward. And Apple just made yet another telling move.

For the sake of new readers, Project Titan is Apple’s secretive electric vehicle (EV)/self-driving initiative. We first picked up on some buzz around the project in December of 2020… But Apple hasn’t made any direct announcement related to it.

Instead, the company has made a series of hires that give us insight into how the project is progressing…

It started two years ago when Apple hired the head of Tesla’s Autopilot program. That clearly signaled that Apple was working on self-driving technology and other software installations.

Then earlier this year, Apple hired a senior executive away from Ford, for safety. This indicated that Apple was working on both the interior and exterior design of the car. It was all about refining the consumer experience and user interface (UI).

And Apple just followed this up by hiring a senior executive from Lamborghini. This was the individual in charge of Lamborghini’s chassis design, vehicle dynamics, and manufacturing.

In other words, this hire is all about the hardware. Apple’s gone from software to UI to hardware. That means all bases are covered.

The big takeaway here is that Project Titan is getting very close to locking in its design for production.

If I had to guess, I would think that the “iCar” is nearly complete in interior and exterior design, and almost all electronic components have already been selected. The software can continue to evolve over the next couple of years in time for Apple’s timeline to meet a 2025 launch.

I’m sure there will be a lot of skeptics out there, but Apple has the financial resources, the partners, and the expertise to develop a fantastic consumer electronics product – and that’s precisely what an electric vehicle is….