On Monday morning, it felt like the world went haywire.

Suddenly, out of nowhere, seemingly random things just stopped working. The lights wouldn’t turn on. We couldn’t control the temperature on the thermostat. The security cameras weren’t functioning.

And it wasn’t just things in our homes.

What do all these things have in common?

Arguably the world’s most successful information technology (IT) company, Google had a worldwide outage of its services.

It affected everything. Nest thermostats and security cameras. Google’s Chat and Meet video applications. Its suite of productivity software. Google’s Gmail services. Basically, any Google product or service that requires a user to log in and “authenticate” was down completely.

The reason? The company did not allocate enough storage space to manage its user authentication software. Google Cloud, the second largest cloud computing company in the world, didn’t allocate enough space for its IT software, something it has an abundance of. Hilarious!

While not being able to chat online, access our documents, or run on the treadmill of endless emails may be a major inconvenience, it won’t cause any injury. But if our security system goes out during a robbery, or if a grandparent can’t turn on the heat on a bitterly cold day, the consequences can be far more severe.

Google’s technical “glitch” highlighted how pervasive Google has become in our lives. If the system goes down, it has a widespread impact… not just on email.

We should remind ourselves that every single one of those Google devices – even that useful Google smart speaker – and every software application that we use from Gmail to Waze tracks everything we say, do, type, search for, receive, and every website we visit.

Google masterfully amasses a dossier on every aspect of our lives and the lives of our loved ones, which it then monetizes. It uses our information to sell advertising on our phones, tablets, laptops, and desktop computers. And soon it will do the same to our cars as well.

Monday morning was not fun for many. The sheer scale of Google’s presence is truly disconcerting. The outage did much to highlight that fact.

But there was one cohort that enjoyed the outage immensely.

Many school children needlessly forced to “learn” remotely with Google’s Classroom software through a small laptop screen got the day off. Good for them.

The buzz surrounding Apple’s self-driving car is picking up…

We are going to start today by talking about Project Titan. That’s the name of Apple’s secretive self-driving car initiative.

Apple has kept this project quiet over the years, but it’s no secret on the streets of Silicon Valley. Occasionally, you will see an autonomous car with lots of sensors but no logo on it. That’s Apple working on its self-driving technology. 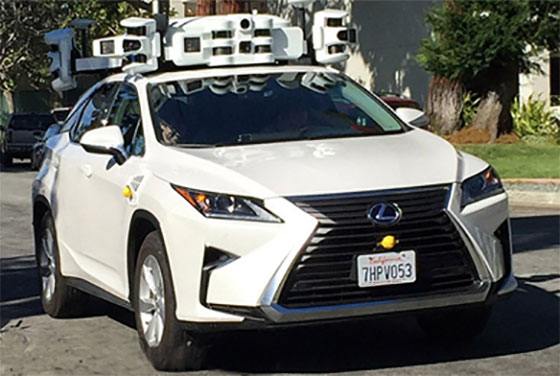 Apple has been secretive about Project Titan up to this point. But that’s changed. The buzz is starting to pick up with two major developments.

This is a good move. Obviously, AI is the key to self-driving technology. So it makes a lot more sense to develop the tech within the AI/ML group.

In addition, strong rumors are going around that Apple is working with semiconductor fabrication giant Taiwan Semiconductor Manufacturing Company (TSMC) to develop the chips for Apple’s self-driving cars.

As a reminder, TSMC is the contract manufacturer that makes Apple’s new M1 chips, which we talked about last month. TSMC also makes semiconductors for companies like AMD and NVIDIA. And perhaps most relevant in this case, TSMC makes the key self-driving semiconductors that go into Tesla’s cars.

We should remember, Waymo’s goal is not to build its own self-driving cars. The goal is simply to get its self-driving technology into other cars. It’s a Trojan horse of sorts. We talked about this strategy when Waymo inked a deal with Volvo over the summer.

I expect Apple will follow the same strategy. We will likely see it announce its first deal with a major car manufacturer next year.

After all, Apple can’t be very happy about the fact that Google’s Android operating system captured over 85% of the smartphone market. Apple must be determined not to let the same thing happen in the auto industry.

So I believe the race is on between Apple and Google in the self-driving space. This will be a very exciting story to watch as 2021 unfolds.

On Monday, we talked about how Uber not only dumped its self-driving unit, but also had to pay Aurora $400 million to take the division off its hands. Well, the story keeps getting better…

Uber just did the same thing with its air taxi unit Uber Elevate. This is the aerial ride-hailing division that has been bleeding cash for years while going nowhere.

And just as with the Aurora deal, Uber will get some equity in Joby Aviation in return. So this is an investment of sorts. And it comes on the back of a $50 million investment Uber made in Joby back in January.

This move shines the spotlight on Joby Aviation, of course. Joby is a fascinating company that I have been watching closely for several years now.

In fact, Joby very well may represent the next generation of transportation. Check this out:

This is the vertical take-off and landing (VTOL) aircraft Joby has been developing.

This four-person craft can lift straight up from the ground like a helicopter. Then, once in the air, the rotors spin forward, allowing the aircraft to fly straight at speeds up to 200 miles per hour.

And what makes this aircraft even more unique is that it is all electric. That, combined with the rotor design, makes it exceptionally quiet. That’s not what we think of as a typical helicopter.

Joby’s aircraft isn’t approved by the Federal Aviation Administration (FAA) yet. But that is bound to happen, perhaps as early as next year.

Imagine being able to take off in one of these right from our backyard to get to wherever we need to be – all with no traffic. There’s no question this form of transportation would be a huge hit.

And imagine being able to use the Uber software application to call a Joby to pick us up in our backyard and take us directly to our local airport. Just think about the time that would save.

The bigger challenge will be a regulatory one concerning how to manage air traffic in a world where air taxis like Joby’s are everywhere.

So this is definitely a company to watch. Joby’s last known valuation was $2.6 billion, but we don’t yet know where the company will be valued following this deal with Uber.

The robots are coming – here’s what we need to do…

Every once in a while, it is good to step back and look at things from a global perspective. I’ve written a lot this year about the manufacturing renaissance taking place in the U.S. with the help of technologies like robotics and automation.

The World Economic Forum (WEF) just published a report on the global impact of robotics and automation. It’s worth having a look at.

The report looks at the impact of robotics on wages, productivity, and wealth creation.

This is a debate that’s been raging for years now. Are the robots going to take all our jobs?

Let’s have a look at the chart below. It shows the impact that the adoption of robotics has on wages: 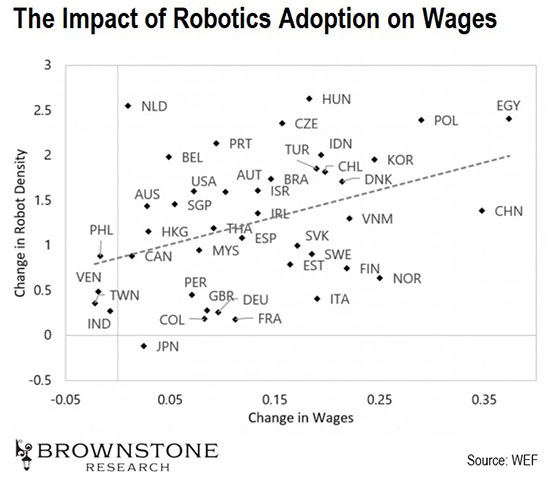 The data clearly shows that an increase in the use of robotics and automation correlates to higher wages. After all, implementing this kind of technology creates high-value jobs and boosts overall productivity. That positive economic activity ultimately results in rising wages.

And this, of course, leads to greater economic growth in the countries that adopt robotics relative to countries who do not. This is important from a policy perspective.

The WEF report concludes that the countries that don’t adopt supportive policies on robotics and automation – including training programs to develop the necessary workforce – will fall behind much more quickly than they have in the past.

It highlights critical issues at a global level. The adoption of advanced technology isn’t something that can be done by dipping our toes into the water. It requires jumping right in and fully committing. Otherwise, the productivity gains simply don’t come.

The reality is that the impact of automation on productivity and wealth creation is greater than it has ever been. We hit a major inflection point the last two years due to the breakthroughs in artificial intelligence, machine learning-specific semiconductors, and developments in AI software techniques. And this will be even more true as we move into the new year.

When I think about the younger workforce today, as well as school-aged children, it is critical to think about developing the skills that are necessary in an advanced, highly automated economy.

We have talked before about how knowledge of AI, machine learning, data science, and quantum computing will be incredibly valuable to employers going forward.

And at the societal level, we need a concerted effort to upgrade infrastructure and skills for advanced technology. We need to create training programs for skills that are so critical to an advanced economy.

The rate of technological change will never be slower than it is today. In fact, it will increase with every day that passes.