By the time we receive this issue of The Bleeding Edge, the Food and Drug Administration’s (FDA) Vaccines and Related Biological Products Advisory Committee will likely have met and voted to recommend the Moderna vaccine for emergency use authorization (EUA).

That will be two vaccines in less than two weeks. Pretty incredible.

However, the vote won’t be unanimous. While Moderna’s vaccine was shown to be 94% effective in clinical trials, its side effects are more severe than the Pfizer/BioNTech vaccine. That vaccine received approval with a vote of 17 to four and one abstention.

That said, Moderna’s vaccine application would likely be used for those 18 years and older, which will simplify the discussion.

With the committee’s recommendation, the FDA will almost certainly approve the Moderna vaccine for EUA tomorrow, just as it did last week for Pfizer/BioNTech. And again, we could see the first Moderna vaccine injections as early as this weekend.

We now have an abundance of proven therapeutic approaches to COVID-19. And within a couple of days, we’ll have not one but two vaccines to choose from. I’m beginning to wonder if there will be enough people willing to take all of the vaccine doses that will be available.

After all, for much of the population, there isn’t a risk of severe illness or death from COVID-19. Yet that population is far more likely to experience side effects from the vaccines. Most side effects will be harmless like fatigue, headaches, and chills. But while rare, there will still be severe adverse reactions to both vaccines.

Either way, with two vaccines approved and widely available, there will be even less arguments for lockdowns and masks. The sooner we get rid of both, the better.

The most successful tech platform of 2020…

When we think of Walt Disney, we think of cartoons and theme parks. We wouldn’t think of Disney as a technology company… but something remarkable has happened.

More than a decade ago, Disney watched the meteoric rise of Netflix from the sidelines. What started as a DVD-by-mail subscription business turned into a content and programming powerhouse.

Disney had the content, but no control over its distribution channels. The success of Netflix’s subscription and streaming platform prompted Disney to invest in streaming company Hulu back in 2009 and then again in 2013. But Hulu never really took off.

And that led to the launch of the Disney+ platform this year.

Unlike Netflix, Disney+ doesn’t have a wide range of content to pull from. Instead, it has a smaller portfolio of content consisting only of the brands and franchises that Walt Disney owns. 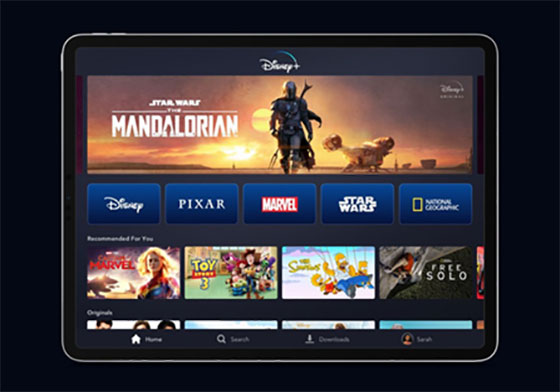 Despite this limitation, Disney+ blew through five-year subscriber projections in a matter of months. It quickly became one of the most successful streaming services on the planet, with 86.8 million subscribers.

For comparison, Netflix has about 200 million subscribers today. But it is not growing nearly as fast as Disney+. I expect Disney will catch up within the next few years.

Going forward, Disney will do what Netflix does. It will spend much more heavily on producing new content. Disney has already announced that it will add over 100 new titles to the service each year. This includes creating new additions to the Marvel franchise and “tripling” down on the success of its Star Wars franchise, as evidenced by The Mandalorian. More Star Wars is always a good thing.

And I am especially interested to see how far Disney takes it. Will it do the same as Warner Brothers and release new movies on Disney+ simultaneous to their theater releases?

The filmmakers and the movie theaters wouldn’t like that. But it would make a lot of sense for Disney.

After all, Disney has never had a true direct-to-consumer platform before. Now it does. Why not leverage it?

Amazon’s worker retraining program is much bigger than we thought…

We talked way back in July of last year about how Amazon had committed $700 million to retraining 100,000 employees in various technical skills. Amazon knew it needed new skill sets across its labor force as technology continues to advance, and this retraining effort was the solution.

At the time, I was thrilled to see Amazon take a leadership position on this issue.

Simply put, the days of going to school… learning a trade… working at your trade for 40 years… and then retiring are over. The world is changing too fast for that model to be effective anymore.

Amazon’s commitment to helping its employees learn new skills was great to see. There is a clear benefit to both Amazon and its employees.

And it turns out that Amazon’s efforts to provide training are about to get much bigger than originally planned. The company just announced that it will help train 29 million people over the next five years. And these aren’t just Amazon employees. The training programs will be open to everyone.

Most of these programs will be delivered digitally. They include everything from short one- or two-day courses to more advanced technical training.

Of course, artificial intelligence (AI) and machine learning (ML) will be a big focus, as will teaching people how to program and work with cloud computing technology. And Amazon will also offer more hands-on training, such as how to splice and fuse fiber-optic cables in data centers.

This is such an incredibly smart move by Amazon.

For starters, the world needs people with the skills Amazon is going to teach. That’s a great headline, and it will look good the next time Amazon needs to engage with regulators. Amazon can position itself as being a solid corporate citizen and acting in a somewhat magnanimous way.

In reality, Amazon will benefit tremendously from this effort.

Amazon has already hired 300,000 employees since the start of the year. Imagine how many resumes had to be assessed and interviews had to be conducted to bring 300,000 people onboard. That’s a massive undertaking. There is no doubt a mind-blowing amount of time and infrastructure were required to make all these hires possible.

By having its own training programs, Amazon will be able to identify strong candidates far more easily. It won’t need to sift through millions of resumes. Amazon can simply assess how potential candidates performed in training.

So this is a brilliant move from Amazon any way we slice it. I’m excited to see this massive retraining initiative go live. Those who are committed to learn will benefit from the training. And they’ll have the potential to find work both at Amazon and elsewhere.

My Near Future Report subscribers have already benefited from Amazon’s success with gains over 78%. If any readers would like to join us, go right here.

Yet another incredible application of CRISPR technology…

We are going to wrap up today with a unique company in Hendersonville, TN. It’s called the Pig Improvement Company (PIC). How’s that for a name?

The Pig Improvement Company sells elite breeding swine to the pork industry. And it is doing fascinating work.

One of the biggest challenges pig farmers face is something called porcine reproductive and respiratory syndrome (PRRS). This is a nasty airborne virus that can wreck pig herds. It results in pigs getting sick, their ears turning blue, and sows miscarrying or giving birth to dead piglets.

Pig farmers must often cull their herds when PRRS breaks loose. And that’s incredibly costly. It is estimated that farmers lose $600 million a year due to PRRS in the U.S. alone.

And that’s where the Pig Improvement Company comes in. This company is using CRISPR technology to make pigs immune to PRRS. It is actually a rather simple edit of a pig’s genome.

It turns out that the PRRS virus binds to a specific receptor in the pig’s white blood cells. The gene responsible for this receptor is called CD163.

The Pig Improvement Company uses CRISPR to remove CD163, causing the pigs not to produce the associated receptors. And without these receptors, the pigs can’t get PRRS. The virus simply doesn’t have anything to bind to.

With $600 million in losses a year due to PRRS, it is easy to see why pig farmers would be interested in buying these “elite” pigs. And the Pig Improvement Company is exploring new versions of pigs that are immune to other respiratory viruses such as the “swine flu” that broke out back in 2009.

And this raises interesting questions, especially amid the COVID-19 pandemic…

If we can safely use CRISPR to make pigs immune to viruses, can we do the same for cows and chickens? And ultimately, what about us humans?