Neil Ferguson, the “expert” epidemiologist from the Imperial College in the U.K., is back in the news… and not in a good way.

As a reminder, Ferguson almost single-handedly served as the catalyst for causing fear and panic about COVID-19. And his research led to lockdowns around the world.

Those estimates have turned out to be remarkably wrong.

In the U.S., mortalities from COVID-19 are now at 51,495, a mere 2.3% of what Ferguson predicted. Ferguson’s prediction was nearly 43 times higher than current numbers.

(Note: This mortality number [51,495] is lower than what we see in the mainstream media. The National Vital Statistics System, which tracks all U.S. deaths, started stripping out flu and pneumonia deaths. Interested readers can review the numbers daily here. The total is still inflated, but it is closer to reality than what we are reading in the news.)

Of course, any loss of life is heartbreaking to see. But the actions taken because of Ferguson’s research have already caused more than $10 trillion of economic damage and growing. Yet the model Ferguson used was not shared or peer-reviewed.

But due to intense pressure from the academic and political communities, the code and assumptions used to determine these grossly inaccurate predictions were released a few days ago.

A team at Edinburgh University has been analyzing the software.

There is no differentiation between different demographics. An asymptomatic child’s ability to spread the virus is assumed to be the same as an infected nurse or doctor at a hospital.

Even Ferguson’s assumptions on mortality rate are grossly overstated. He assumed in the U.S. that the number of mortalities would be 0.9% of those who contracted COVID-19.

Swedish epidemiologist Johan Giesecke, who is highly critical of Ferguson, has a current estimate of the mortality rate at 0.1%. And as I wrote yesterday, we are seeing data in the U.S. that suggests the mortality rate may be as low as 0.03%.

And the model itself is roughly 15 years old. That got me thinking… What was Ferguson’s track record of predictions for previous viral outbreaks?

With a track record like that, why would anyone listen to Ferguson at all?

One of our biggest societal challenges is figuring out what information sources we can trust. We are flooded with conflicting information.

My team and I spend countless hours every day sifting through information, checking and double-checking sources to figure out what’s true and what’s biased.

Needless to say, knowing what is happening is critical to understanding investment implications.

Be sure to keep reading The Bleeding Edge for our findings. Now to our insights…

One of the best ways to determine a tech company’s next move is to look at the code in its software updates. That’s how we learned of Apple’s augmented reality (AR) ambitions before they were announced.

This kind of information can provide investors an edge. It is a lens on future business strategy and product launches.

And right now, Tesla’s latest software update tells us what the company is up to.

Hidden in Tesla’s software is something called a “pay as you go” subscription plan for its Autopilot package. This gem reveals Tesla’s master plan…

Tesla plans to launch a monthly subscription service for the full self-driving mode of Autopilot later this year. This is huge news.

Right now, most Autopilot miles are on the highway from on-ramp to off-ramp. Tesla hasn’t yet released full autonomy in its software.

The upcoming premium version of Autopilot will be fully autonomous. We will be able to have our Tesla drive us from Point A to Point B without us ever needing to touch the steering wheel.

And the fact that this option is coming later this year shows us how far along Tesla is. Tesla’s release of the software enabling a subscription payment model tells us full autonomy is in the very near future.

Tesla was very clever with its business model.

It sells or leases the car, and then it offers software upgrades like Autopilot for additional fees. Autopilot can be purchased for $7,000 outright, but that steep price tag is out of range for most consumers. That is why a subscription model is so attractive.

Early estimations for the premium Autopilot package are just over $100 per month. Tesla is imitating Silicon Valley software companies by choosing a software as a service (SAAS) strategy. These models have been remarkably successful over the last decade.

This makes a ton of sense, and I think it will do very well for Tesla. How many Tesla owners wouldn’t pay $100 per month to have the car drive itself? It’s a great value proposition.

Remember, Tesla’s taxi network will allow anyone who owns a Tesla with the 100% self-driving package to put their car to work when they aren’t using it. The car will go out and provide taxi rides to consumers until it’s summoned back to the owner.

We can think of it like Tesla’s version of an Uber or Lyft. I can even envision an option for the car to go to a service location to be cleaned and disinfected before returning to its owner.

The owner will receive a large portion of the revenue generated from these rides… which means the Tesla will ultimately pay for itself. At that point, the car is free for all practical purposes.

Who wouldn’t want to own a Tesla then? Think about it… Sign a lease for a Tesla Model 3, and drive it home. Then, monthly revenue from the robo-taxi service pays for the lease and then some.

Can any other traditional automaker say that?

Bottom line: I’m still a Tesla bull. And while the stock is richly valued where it is now, this company has a very bright future ahead of it. Legacy automakers should be very nervous.

Disney’s subscription services are on fire…

We’ve likely heard of Disney+, the streaming service from Disney. Consumers can watch their favorite Disney movies, plus some original content, any time they want. I recommend The Mandalorian if you haven’t seen it yet… 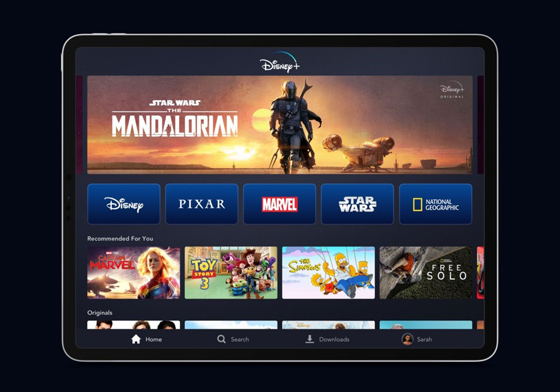 Originally, Disney forecast that Disney+ would get 60–90 million subscribers by the end of 2024. But get this…

Its streaming services have outperformed even the company’s own most aggressive forecasts.

First, it demonstrates the power of a historic brand. And it reveals a clear shift in consumer preferences…

The trend toward streaming services and away from linear broadcasting like cable TV (and, for that matter, movie studios) has been in place for a few years now. And COVID-19 just kicked that trend into hyperdrive.

Think about it. With so many people “sheltering in place,” more people are turning to streaming services for entertainment. And with the kids home from school, what better streaming service than family-friendly Disney?

Consumers want ad-free, video-on-demand content, and they are willing to pay for it. We will see more and more consumers cut the cable cord and shift toward the best streaming platforms in the months and years to come.

And the streaming platforms that are best able to accommodate the growing consumer demand will be in the best position to capitalize on this shift.

Regular readers know that Square is one of my favorite companies. It has done a remarkable job of simplifying point-of-sale payment systems. It provides artificial intelligence-enabled services for small and medium-sized businesses.

And now it has one of the best consumer applications for payments and investing.

First, Square’s Cash App is growing like crazy. Cash App is Square’s money transferring application. The app allows peer-to-peer money transfers with the push of a button. It is similar to Venmo but is even better from my perspective.

And it now appears that Square Cash has surpassed competitor Venmo in monthly active users.

Official numbers haven’t yet been released, but estimates suggest that Square Cash now has more than 30 million monthly active users, while Venmo is lingering just below the 30 million mark.

This is the first time bitcoin transactions exceeded dollar-based transactions. That’s remarkable. And I believe it’s because the Cash App is by far the simplest way to buy bitcoin today. It’s such a beautiful, elegant application.

I should point out that Square only takes a very small cut of the bitcoin transaction volume. It earned $7 million on this quarter’s $306 million in transactions.

But keep in mind that Square earned $8 million on bitcoin transactions for the entire year in 2019. Clearly, mainstream consumers are interested in digital assets. It may not be as profitable as cash payments, but Square is making itself invaluable to its customers.

And the company saw a spike in direct deposits into the Cash App. That means more consumers are choosing to have their paychecks deposited into the Cash App rather than a traditional bank account.

To me, this is a sign that we are quickly moving toward peer-to-peer “contactless” payment systems. If consumers can save, invest, and buy goods and services through the Cash App, what’s the point of having a bank account? Consumers can even buy stocks on the Cash App.

Plus, Square has done a fantastic job of facilitating the Paycheck Protection Plan (PPP) loans for small businesses, while the traditional banks have provided consumers with a miserable experience. We talked about that last month.

So Square is doing a fabulous job with its Cash App. Square Cash cuts out the middleman and makes it so consumers never have to physically touch anything. All transactions are digital.

This is providing a seamless transition to the world of digital wallets and peer-to-peer payments. The payment revolution is underway.

And for curious investors, yes, I still like Square’s long-term investment potential. Thanks to the recent market volatility, this great company is still trading below its recent high.