Van’s Note: Van Bryan here, Jeff’s managing editor. Regular readers of The Bleeding Edge know that we focus on technology. But once in a while, we also bring our readers valuable ideas that fall outside that box.

Tom Dyson is a longtime friend and colleague who isn’t afraid of making bold moves. In 2003, Tom went “all in” on gold. That was right before gold’s last historic bull run. And in 2011, he was one of the first analysts to cover bitcoin, when it was still trading for under $10.

Now Tom has gone “all in” on a new idea. He’s put his family’s entire net worth into it. It’s a radical move… but as Tom sees it, this one strategy could create lasting, generational wealth for him and his family.

And the best thing? Any investor can take part.

To find out more, be sure to read on…

By Tom Dyson, Editor, Postcards From the Fringe

The financial world is either risk-on or risk-off… It’s a world that is either expanding with win-win deals or contracting… civilizing… or decivilizing.

It is either making progress… or it has gotten too far ahead of itself and is backtracking.

The most important trend in finance is the decline in the Dow-to-Gold ratio.

The Dow-to-Gold ratio tracks the Dow Jones stocks as priced in gold. It tells us the best times to buy gold and the best time to buy stocks.

Let’s call this the “primary trend.”

But along this primary trend, it got waylaid. And it spent eight years backtracking. Eight long years… of fake money and rising stocks.

Now, finally, this most important trend in finance is “back on.”

To my mind – and for my money – it’s presenting the biggest opportunity to profit since, well… I found bitcoin in 2011.

My Gold Story: Why I Went “All In”

I left my job nearly two years ago. We sold all our things. Kate and I (we’re divorced) hit the road with our three kids. We don’t have anywhere to live. And we homeschool the kids.

We left “the matrix” in another important way, too.

When we left America, we drained our bank accounts and retirement accounts of cash, and we converted all our savings into gold and silver.

Why did we do this? We don’t want to be in the system anymore. It’s unbalanced and unstable.

So we’re going to sit on the sidelines, in precious metals, until it’s safe to return to the financial system. When it’s finally safe, we’ll sell all our gold and invest in the top dividend-raising stocks.

Our money will stay there – I hope – generating bigger and bigger dividends for the rest of our lives. (More on this in a moment.)

How will we know when it’s safe?

That’s where the Dow-to-Gold ratio comes in. It’s the ultimate barometer of systemic “health”…

Our Dow-to-Gold trade is based on a simple premise…

You buy stocks when they are cheap relative to gold. That is, when the Dow-to-Gold ratio is below 5.

Then you sell stocks when they become expensive – when the Dow-to-Gold ratio rises above 15. At that point, you return to gold.

The chart below shows it all. The towering peak in 1999. The countertrend rally from 2011 to 2018. And if you look carefully, a recent reversal… 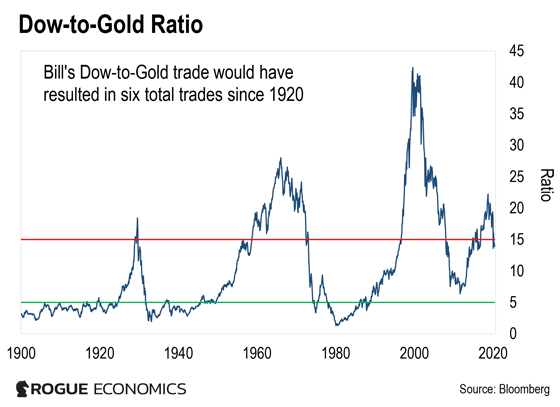 I interpret this recent reversal as the Dow-to-Gold’s primary trend reasserting itself, getting back on track, and once again marching back down toward single digits. 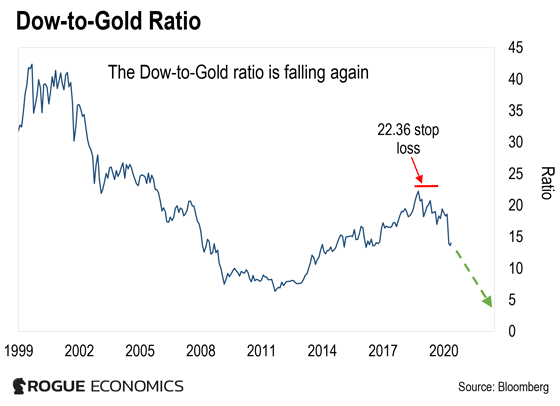 The ratio topped out at 22.36 in October 2018. It’s been falling since… and I speculate it’s about to head much lower.

Of course, if I’m wrong and the Dow-to-Gold ratio isn’t ready to resume its primary trend lower, the market will let us know.

The ratio likes to move in big, clear trends. And once it’s in motion, it tends to stay in motion.

Its drop in 2018 implied to me that gold would start outperforming the stock market… possibly for as much as the next five or 10 years.

I immediately drained my bank and retirement accounts and put everything into gold and silver. Then, I started nagging my friends and family to do the same.

My hypothesis is that the Dow-to-Gold ratio is now back on its way down… to a level somewhere below 5. Bill calls this its “rendezvous with destiny.”

I will hold my gold until then, at which point I’ll sell it all and invest the proceeds into the stock market.

Specifically, I will buy what I call “dividend aristocrats.”

These are companies like Coca-Cola, Johnson & Johnson, AT&T, etc. They have decades-long track records of relentlessly raising their dividends.

There are no better passive investments than stocks like these. You get rich twice this way. One from the rising dividends and two, from the compounding effect of reinvesting dividends.

There is no better way to grow wealth.

But until it’s time to buy these dividend aristocrats, I’m sitting on the sidelines in gold, where I will remain until stocks are ready to beat gold again. Then, I will resume my long-term “dividend aristocrat” compounding strategy.

If I’m right about this – and if I time my zigzag correctly – my family will never have to worry about money again.

P.S. On May 20, at 8 p.m. ET, I’m releasing an urgent presentation based on this idea. And for anyone who tunes in, I’m giving away one of my highest-conviction trades… which you can act on right away. Go here to save your place.