Across the country, the battle between “open the economy” and “shelter in place” rages on…

This dichotomy makes the crisis so unnecessarily frustrating…

For instance, Los Angeles County’s public health director indicated that the COVID-19 lockdown would continue for another three months… despite thousands of California health care workers being laid off or furloughed. They have nothing to do in the hospitals.

California Governor Gavin Newsom said that California is “days away” from continuing to reopen. But then the Los Angeles mayor, Eric Garcetti, said that LA will “never be completely open until we have a cure.”

I wouldn’t blame anyone in California for being confused. I feel for my friends and readers in the state.

At least you have some nice weather to enjoy? Unless you have to stay home…

In Wisconsin, the governor tried to extend a stay-at-home order. The Wisconsin Supreme Court struck it down.

In Washington, D.C., the mayor managed to extend the stay-at-home by three weeks. It’s now set to end on June 8.

Not surprisingly, the world wants to get back to work.

Jobless claims brought in another 2.9 million this morning. That brings the grand total to 36.5 million over the last eight weeks.

The U.S. will exceed 40 million jobless claims within the next two weeks. These numbers are once-in-a-generation level. The stock market is up, backstopped by the Federal Reserve.

About half of the states in the U.S. have already started lifting restrictions. They recognize the absurdity of lockdown now that we have testing data available.

But the other half continues to cower in fear. People are panicked by the rhetoric from the press.

And the narrative is starting to shift…

It’s not about flattening the curve anymore. That has already happened. Now the message is to stay at home until there is a cure.

I have bad news for Mayor Garcetti and others who believe that we’ll have an FDA-approved vaccine this year. It is not going to happen.

It typically takes a decade to develop, test, and approve a vaccine for safe usage. The shortest possible timeframe is 18 months. This timeframe has also been highly criticized. That would put us in the second half of 2021. By then, COVID-19 will likely be nothing but a very bad memory.

And I just read some research last night out of Indonesia, a place where I used to travel to for both work and holiday when I lived in Japan.

The study was about COVID-19 mortality and vitamin D levels. The scientists evaluated 780 individual cases of COVID-19. The results were simple. Patients who contracted COVID-19 were over 19 times more likely to die if they had deficient Vitamin D levels.

It’s not a cure. But the best thing we can do is get outside, enjoy some sunshine, let our bodies naturally produce Vitamin D, exercise, boost our immune systems, and say hello to a neighbor or two.

Best wishes to all.

The U.S. Space Force is set to launch its second mission…

The U.S. Space Force was formed back in December. Its first official mission launched a military communications satellite in March. Its next mission will launch an X-37B space plane into orbit. The launch will happen on May 16 at Cape Canaveral in Florida.

The X-37B has been a secretive Air Force project for years. It’s produced only two of these spacecraft thus far. Here’s what they look like: 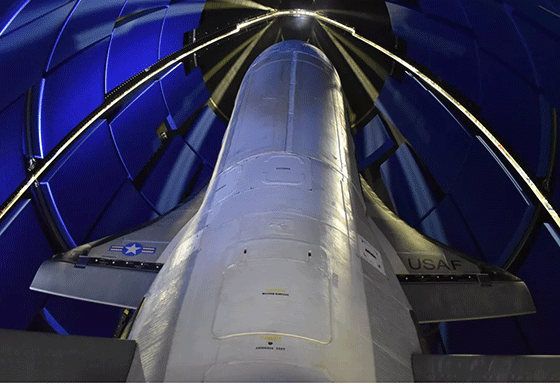 As we can see, the X-37B looks like a small space shuttle. It has cargo space similar to the bed of a pickup truck inside.

And the plane was designed to stay in orbit for long periods. The Air Force kept one of these in orbit for 780 days on a recent mission. That’s more than two years.

Of course, we don’t know what the X-37B was doing for two years in orbit. And the Space Force hasn’t shared what its plans are for the plane on its next mission.

But here’s my suspicion…

I suspect it is testing advanced forms of propulsion and conducting surveillance. The X-37B can go into orbit at low altitudes. Given the size of the cargo hold, there is room for advanced optics and imaging technology that could deliver amazing surveillance.

And the X-37B could carry enough fuel to change orbits and reposition many times during its stay in space. The military and intelligence communities would certainly find this useful.

With its first mission in March and its second mission set to launch this week, the U.S. Space Force is moving fast. And get this – the agency now has recruiting ads on Twitter. That seems fitting for Space Force.

I’m seriously wishing I were 21 again and had just graduated with my aeronautical and astronautical engineering degree. I’d be all over this… 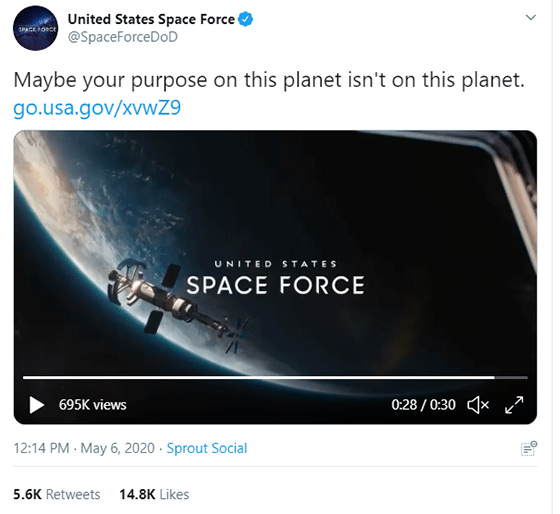 What we are witnessing here is a rebirth of the aerospace industry. We are going to see massive investment in this space in the coming years.

That’s especially true because commercial airlines are struggling to recover from the COVID-19 pandemic. Simply put, consumer air travel will not go back to where it was before COVID-19 anytime soon.

We are already seeing a rapid shift toward digital meetings and conferences. That will persist and transform with technologies like augmented and virtual reality.

During my busiest years as a technology executive, I used to spend 250 nights a year on the road. Those days are over.

As this situation becomes more and more clear, we’ll see increased investment flow out of the commercial air travel industry and into aerospace projects… And, of course, new communications platforms will enable virtual presence in far more powerful ways.

Last year, Google announced that it was going to create the world’s first interconnected, digital-first smart city in Toronto. Everything was going to be integrated and automated over a 190-acre site, and Google committed $1.3 billion to making the smart city happen.

Google just announced it is pulling the plug and reneging on its investment commitment. The company cited “unprecedented economic uncertainty” due to COVID-19 as its reason for backing out.

What a convenient excuse.

As we know, COVID-19 is accelerating digital-first trends… not hindering them. Here’s what really happened…

The people living in the targeted area found out what Google was up to and started to lobby against the project.

They learned that all their movements were going to be monitored, basically making them a laboratory experiment.

And here’s the worst part – the original agreement said that all data collected on people living in the smart city would belong to Google. Google would be able to package and monetize that data as it saw fit.

Naturally, the locals weren’t going to put up with that. So they managed to get the project reduced to just a 12-acre site.

And Toronto determined that all data collected within those 12 acres would become a public asset. That would make it hard for Google to use and monetize the data. And that’s the real reason why Google backed out.

This just proves once again that Google will not do anything unless it can collect behavioral data on people in the process. It’s all about packaging and selling our data – the more sensitive, the better.

And here’s the thing – Google is sitting on nearly $120 billion in cash. It could afford to pilot a $1.3 billion smart city for the sake of technological advancement without needing to harvest behavioral data in the process.

It could derive tremendous value for future projects from an experiment like that. But without a clear and near-term monetary return, Google packed its bags and shut down the project.

Las Vegas is going to be powered by solar energy…

Clean energy has been a buzz phrase for years. Numerous politicians have tried to push pet projects in the past. One of my “favorites” was Solyndra.

It just doesn’t make sense to use taxpayer funds to invest in a manufacturing business. Tax incentives and allowing the use of federal lands (i.e., policy approaches) make so much more sense for clean energy projects… something I am very supportive of.

In fact, I am currently designing a house with Tesla’s solar roof system and geothermal wells – I’m going to be able to produce all my electricity, as well as heating and cooling, just from the Sun and the Earth. And my excess clean energy will be sent back to the grid.

The White House just approved a $1 billion solar project in Nevada. And NV Energy, which is a subsidiary of Warren Buffett’s Berkshire Hathaway, will back the project. It’s been dubbed the “Gemini Solar Project.”

The Gemini Solar Project will build a massive solar farm on 7,000 acres of federal land about 30 miles northeast of Las Vegas. It will be a 690-megawatt project with 380 megawatts of industrial battery storage.

The batteries will store unused energy during the day and feed the grid overnight. When complete, this solar farm will power about 260,000 households in Nevada. That’s enough to fuel the entire residential population of Las Vegas. How’s that for impressive?

This will be the largest solar-power project in United States history, and I think it is a very smart play. A big chunk of unused federal land out in the desert will soon generate electricity.

And since it’s in the desert, it is sunny nearly every day. Plus, there is plenty of space for solar panels. And the project is privately funded, so no taxpayer dollars are being used.

And as for investment implications, the winners will be the companies that provide the necessary equipment for solar energy capture and storage. Both Enphase Energy and SolarEdge were up big during the last four weeks.

I’m very excited about Gemini Solar, and I hope we see more projects like this wherever solar energy makes sense around the country. The tech has advanced to the point that we can finally put the world on a path to clean energy.