Combined, both physicians have more than 40 years of experience dealing with viruses and respiratory infections. They knew what was coming.

And because they purchased the tests in advance, they could collect direct testing data from the population of Kern County, California. They ran thousands of tests on patients to try to understand COVID-19.

Drs. Erickson and Massihi reported their results at the end of April. A local news channel broadcast the interview.

The doctors also shared serological testing data from Stanford University, and they determined that COVID-19 had likely reached 4.7 million people throughout California.

With 1,227 confirmed deaths in the state at the time of the interview, that results in a case fatality rate of 0.026%.

They communicated with a network of physicians across the country as well, who shared that hospital administrators were pressuring some doctors to claim COVID-19 as the cause of death on death certificates.

As we have written about before, the Centers for Disease Control and Prevention (CDC) sent explicit directions to hospitals around the country to do exactly that – a positive COVID-19 test confirmation is not required. Hospital administrators have just been following the CDC’s directions. Dr. Erickson spoke with doctors who were not comfortable with this.

The interview with the two physicians was posted on YouTube.

YouTube banned the video and took it down. YouTube claimed that the interview was “a violation of community guidelines.” Wow.

I have seen some terrible things that were not banned on YouTube, but this was.

A video of two practiced and professional physicians, sharing the data that they had collected from actual testing, was banned. This information is precisely what the world needs more of right now.

This sets a dangerous precedent, and it’s not the first time. Google (owner of YouTube) and Facebook choose what we can and cannot view. If something doesn’t fit their narrative, it is shut down.

The tech community needs to do better. Media and advertising platforms need to permit independent thought and maintain impartial policies regarding what is posted on their platforms.

The information that Drs. Erickson and Massihi shared was not dangerous. It is precisely what we need more of while dealing with a virus that we don’t yet completely understand.

COVID-19 is propelling the biotech sector into the spotlight. As a result, we’re at the start of a multiyear bull market in biotechnology. The pandemic has opened the doors for radically new approaches to vaccines and therapies, many of which were not taken that seriously before.

Take synthetic biology, for example. This is a therapeutic approach that seeks to mimic systems already found in nature. A company called Moderna is one of the leaders in this space.

Moderna made the news back in March when it brought a potential COVID-19 vaccine to Phase 1 clinical trials. What makes Moderna’s approach unique is that its vaccine uses messenger RNA (mRNA) to produce an immune response.

How does that work precisely?

The genetic code determines an organism’s traits and bodily functions. It’s a “genetic blueprint.” But the genes themselves don’t do the work. They require proteins to carry out specific functions.

mRNA is the link between genes and proteins. The information contained within genes is transcribed into mRNA. That mRNA then tells the body what proteins to produce to carry out the genes’ functions.

Moderna’s vaccine mimics this process. It uses synthetic mRNA to tell the body to produce proteins that look like COVID-19. That helps the body produce antibodies to fight the virus and build immunity.

This is bleeding-edge work. The Food and Drug Administration (FDA) has never approved an mRNA vaccine… so there’s no precedent for this synthetic biology approach.

In other words, the technology is brand new. That means it needs to be on our radars as technology investors.

If successful, synthetic biology would open the door to a wide range of therapies for many different diseases. And that’s important because the development time for these therapies is extremely fast.

Moderna designed its vaccine in just 42 days. That’s incredible. It normally takes years to get to a working vaccine.

So this approach would rapidly accelerate therapeutic development in the biotechnology space. And so far, the results are promising…

Moderna’s Phase 1 clinical trial went well. Its vaccine got FDA approval to move into a Phase 2 trial. It plans on testing 600 volunteers in Phase 2. The company plans to have full trial results by early summer.

This is something I’ll be watching very closely these next few months. Moderna’s Phase 2 trial is not only important for COVID-19, but it could also be the catalyst that brings synthetic biology to the forefront of the industry.

Tracking pharmaceutical drugs on the blockchain…

Here’s something that may surprise us…

The FDA studied 163 drugs that had shortages between 2013 and 2017. It found that quality problems caused the shortages about 62% of the time. In other words, the drugs were produced with ingredients that did not meet quality standards. So production had to be halted.

Can we imagine how disastrous it would be if a life-saving drug or therapy suddenly fell into short supply, especially during a pandemic?

The world desperately needs to track the supply chain of vital drugs. And blockchain technology might be the answer.

IBM, Merck, Walmart, and KPMG teamed up to pilot a blockchain project that tracks pharmaceutical drugs as they move through the supply chain. This is a great application of blockchain technology. And it’s got regulatory backing from the FDA. Legislators are also pushing for it…

Back in 2013, Congress enacted the Drug Supply Chain Security Act (DSCSA), which requires the pharmaceutical industry to adopt very strict policies for tracking drugs through the supply chain. The deadline for doing so is November 2023.

We didn’t see much progress on this in the early days due to such a wide deadline. But now that we are just over three years out, we’re seeing work on the drug supply chain picking up.

And I’ll point out that this is incredibly important, especially in light of COVID-19.

The drug supply chain is one of the most complex supply chains of any industry in the world. Most active pharmaceutical ingredients are produced in mainland China and distributed from there for eventual drug production. The problem is that quality standards have been notoriously bad.

A lot of shipments go to India, which produces most generic drugs sold in the U.S. Drugs are formulated in Europe, too. And, of course, biopharma companies in the U.S. depend on drug shipments from China as well.

That’s why this partnership caught my eye.

These four companies are applying Hyperledger, which is a blockchain technology that IBM has supported. It will track all drugs and ingredients at every point in the supply chain. And early results of this pilot are promising.

The FDA announced that Hyperledger allowed these companies to identify quality problems in seconds and immediately alert their partners downstream in the supply chain. The problem can be fixed right away… before there is any risk of patients consuming problematic drugs from a pharmacy.

This is a game changer. And it has nothing to do with cryptocurrencies or digital assets.

Blockchain technology’s advantage here is a permissioned, secure, immutable, decentralized ledger that can be used to track critical information in real time. We can determine provenance and trace products in seconds.

As consumers, we’ll be able to rest easy knowing that our prescriptions are made with safe, trusted ingredients. It can’t come soon enough.

A new approach to hydrogen-powered cars…

I receive a lot of questions from readers. But one of the most popular is this… “Jeff, why don’t we have hydrogen-powered cars?”

Well, it may be a surprise, but we do already have working hydrogen cars. And they are attractive for two reasons…

First, hydrogen is clean energy that doesn’t put out any emissions. Second, hydrogen has more “energy density” than a typical lithium-ion in an electric vehicle. That means we can get more energy per unit of hydrogen than we can from an equivalent unit of energy from lithium-ion batteries.

Today’s hydrogen vehicles use hydrogen fuel cells. These cells need to be filled with pure hydrogen at a filling station. But it is extremely expensive to produce pure hydrogen.

Compare that to an average of $2.60 per gallon of gas in 2019. And if we use fossil fuels to produce the hydrogen, we end up using more carbon than if we had just stuck to normal gasoline.

Clearly, hydrogen just isn’t competitive. But I spotted an interesting early stage company that has developed a novel approach to producing hydrogen.

AlGalCo, based in Indiana, has developed a system called “Hydrogen on Tap.” This system actually produces hydrogen in real time.

I am happy to say that this tech was originally developed at my undergraduate engineering alma mater, Purdue University. AlGalCo licensed the tech from Purdue and has built a company around it.

The Hydrogen on Tap System 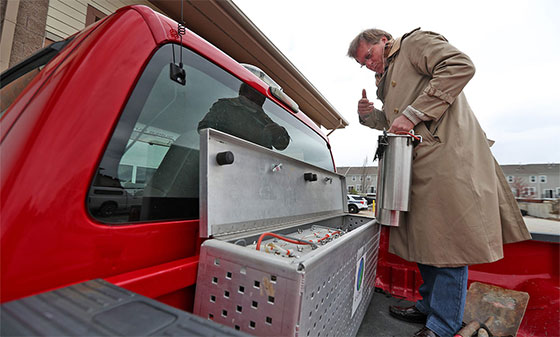 AlGalCo doesn’t use fuel cells. Instead, it installs cylinders that hold pieces of an alloy made from aluminum and gallium. When water drips onto this alloy, it causes a chemical reaction that splits the oxygen from the hydrogen in the water.

Then the hydrogen is pumped directly into the manifold of the car.

That means this system produces hydrogen on the spot. As the name suggests, hydrogen is “on tap.”

And it’s completely clean. There are no emissions. The only byproduct is aluminum oxide, which can be recycled.

This approach has a lot of potential.

The one downside is that this system takes up a lot of space “beneath the hood,” which results in a bulkier vehicle.

For that reason, I don’t think we’ll see this applied to passenger vehicles unless the units significantly reduce their size. However, this is ideal for trucks and municipal vehicles where space and aesthetics are not a concern.

The key to cracking the passenger vehicle market will be in developing a way to produce hydrogen fuel cheaply and preferably using only clean energy. But AlGalCo’s approach offers an immediate solution for public fleet vehicles or even industrial applications where clean fuel is desirable.