We’re in for another interesting week.

The Federal Reserve will begin to purchase hundreds of billions of dollars of corporate debt in an effort to keep U.S. businesses – and thus the U.S. economy – functioning. The Fed will purchase both newly issued debt as well as already-issued corporate bonds.

The idea is simple…

For already-issued bonds that have been declining in price, the Fed steps up to buy. This puts a floor in the price of the bond. This is good for bondholders, as it stops the bleeding (on paper) and might even create a window for bondholders to sell their positions at a better price if they need liquidity.

And when the Fed purchases newly issued corporate debt, it helps the issuer (a company) raise the funds necessary to avoid corporate bankruptcy or defaulting on existing corporate debt.

Corporate defaults are no small matter in times of crisis. During the 2008–2009 financial crisis, speculative-grade corporate debt default rates rose to around 12%. And rates were at 11% after the internet bubble burst.

Financial giant BlackRock will deploy as much as $750 billion into the market on behalf of the Fed. That’s a mind-numbing amount of stimulus to keep companies from defaulting or going bankrupt.

This is the definition of being the lender of last resort.

In theory, the Fed will backstop corporate debt, the economy will recover, and then the Fed can sell the debt back at, or above, the prices that it paid. Ultimately, the Fed’s balance sheet is reduced again.

While I am no fan of big government, I do believe that the plan will work. This is based on my belief that we will see a strong recovery in the second half of this year and an even better year in 2021 than in 2019. We will absolutely be back to growth.

And high-technology and biotechnology sectors are going to lead the way.

MoneyGram’s partnership with Ripple is growing…

Here’s something that shouldn’t be a surprise to any of us… Person-to-person (P2P) payment transfers have increased in the age of COVID-19. That makes sense.

With a good portion of the world out of work and consumers quickly moving toward contactless preferences, sending money between two parties electronically has been the most desirable means of transferring money.

That has implications for our first insight…

We talked about the MoneyGram-Ripple deal back in June of last year. That’s when Ripple, a blockchain company specializing in money transfers, invested $30 million into legacy money transfer giant MoneyGram (MGI).

For Ripple, this move broadened exposure. And this is a competitive advantage for MoneyGram that will enable the company to lower the transaction fees it charges.

Without Ripple, MoneyGram takes 10–12% off every money transfer a customer makes just to be profitable. That means customers sending $100 to family members will have around $10–12 deducted from the total. Only $88–90 will be sent.

With Ripple, MoneyGram’s fees will drop to pennies on the dollar. When customers send $100, $99 and change will get where it’s going. Better, cheaper, faster, more security… Everyone wins. The only losers are MoneyGram’s competitors, like Western Union.

The two companies haven’t provided much detail around how the partnership has been advancing. But we can glean some insights based on some interesting incentive payments.

Ripple just paid MoneyGram incentives of $16.6 million in the first quarter of this year. That’s up from $11.3 million in the third and fourth quarters of 2019 combined.

This type of incentive structure is normal in the payments industry. Companies like PayPal, Visa, and MasterCard provide incentives for companies to adopt their tech. Ripple is doing the same thing.

And the fact that the monetary incentives were so high this quarter tells us that MoneyGram is clearly meeting the milestones for the adoption of Ripple’s technology and its digital currency XRP, which was outlined in their original agreement.

This also tells us that many of MoneyGram’s customers are already benefiting from the adoption of Ripple’s technology to complete their cross-border transfers. That’s an exciting development.

To me, the deal between MoneyGram and Ripple is a great example of how digital currency can modernize legacy systems.

Surprisingly enough, MoneyGram is a company to watch. The adoption of Ripple’s technology throughout its business will reshape the payments landscape. And from my perspective, Ripple’s success to date is the beginning of the end for legacy cross-border payment systems like SWIFT.

SWIFT is expensive, less secure, and very slow… Transactions take days to settle. There’s just no reason for such inefficiency in the year 2020. 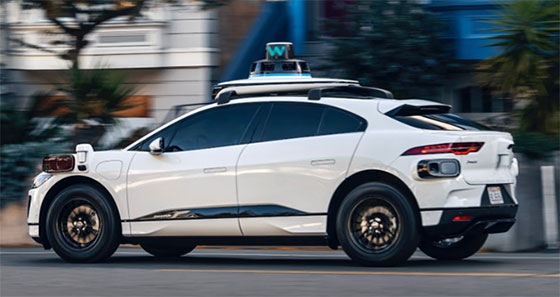 We can see it still has the huge lidar system on top. Lidar is the technology that can produce a 3D image of the space around a car. Self-driving cars use it to “see” the objects around them.

And now Waymo has added lidar systems all around the perimeter of the vehicle as well. That bulging item just above the front tire is lidar. So is the item sticking out just beneath the back taillight. Those units are on each side of the car too – for a total of four additional lidar units.

I find this odd.

Usually, technology gets smaller and becomes seamlessly integrated as it is developed. That’s not happening here. Waymo’s approach is getting bulkier and more expensive.

To me, this car is overengineered. Those lidar systems are expensive. It’s hard to imagine this model being put into mass production… Each car would cost at least $5,000 more to produce.

Compare this to Tesla. Tesla doesn’t use lidar for two reasons. One is the cost. The other is the overall aerodynamics and aesthetics of the design.

Whether or not to use lidar has been one of the biggest debates in the autonomous tech industry, but we already know the technology works without it. Tesla has already proven the point…

The company has sold roughly 826,000 modern Tesla vehicles, which include its second- and third-generation autonomous hardware configurations. Those cars have now driven 3.3 billion miles using Autopilot on real roads. And by December of this year, that number will be more than five billion miles. 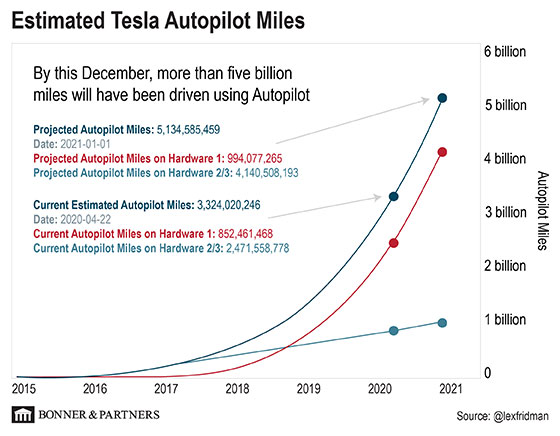 And Tesla has done this without any lidar technology. The cars are sleek and affordable.

We can compare this to Waymo, which boasts just 20 million self-driven miles on public roads. Waymo also claims 10 billion simulation miles. Simulations are important, but they just aren’t the real thing.

So what is Waymo up to? Here’s the rub…

Waymo is not targeting the consumer auto market. I don’t think any of us would want a car with all that bulky equipment sitting in our driveway.

Instead, Waymo is going to partner with a manufacturer to create an autonomous ride-hailing fleet. And it is making the lidar technology very visible for the sake of regulators.

What’s the best way to demonstrate to regulators that your self-driving taxis are safe? Make the “safety” equipment as visible as possible.

And the reality is that most riders won’t mind what the taxis look like. As long as we can get from point A to point B safely, we’ll happily ride in a self-driving taxi.

And it’s even better if there is no driver in the front seat. After all, who wants to breathe the same air as someone you don’t know in a small, confined space?

That’s Waymo’s plan here. And it’s going to happen soon. Waymo is ready to put the technology into production. We can expect to see a big deal before the year is out.

I got a kick out of this last one – SpaceX is going to take Tom Cruise up to space. Cruise plans to shoot a movie at the International Space Station (ISS).

And just in case we think this might be a publicity ploy, look at this: 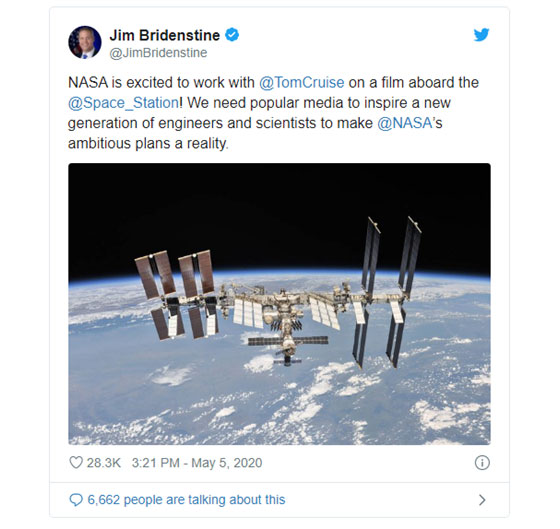 NASA administrator Jim Bridenstine tweeted that NASA is excited to work with Tom Cruise on this project. So get ready… Real filmed-in-space movies are coming.

Some companies will fly anyone up to the ISS for a week for about $25 million. That’s not cheap, but it’s not uncommon for high-end movie budgets to spend hundreds of millions of dollars.

The cost for Cruise and a couple of recording team members would be well within a normal production budget for a major star.

It’s great to see that Cruise is adventurous enough to make it happen. And the timing isn’t random…

This month, SpaceX will use its Crew Dragon module to take U.S. astronauts to the ISS for the first time since the conclusion of the Space Shuttle Program in 2011.

The launch is currently scheduled for May 27 from the Kennedy Space Center in Cape Canaveral, Florida. And SpaceX is doing this at a fraction of what it used to cost NASA to get astronauts to space.

Clearly, Tom Cruise is looking to leverage this development and team up with a high-profile company like SpaceX.

Presuming that the Crew Dragon launch goes off without a hitch, I suspect we’ll see news of a movie deal later this year with production scheduled as early as 2021. I can’t wait.