It’s that time of the year. Schools across the U.S. and around the world are preparing to open their doors to students as early as mid-August.

Will school administrators have the courage to stand their ground and take a logical, fact-based approach to reopening?

Our children, grandchildren, nephews and nieces… they are more likely to be hospitalized by catching the flu. Should we, therefore, close down all the schools every flu season? What would you do if it was your decision?

Well, we know what Florida is going to try to do.

The state’s commissioner of the Department of Education, Richard Corcoran, issued an order to require all schools to open at least five days a week. Teachers unions across the state are already saying that they won’t comply with the order and plan on having virtual classes in the fall.

If the CDC’s research wasn’t definitive enough, the New England Journal of Medicine just published in-depth research for a roughly two-month period between March 15 and May 20 in pediatric health care facilities across the U.S.

The research was excellent. It was fact-based, and its goal was to understand the risk associated with COVID-19 for those 21 years old or less, including those with rare conditions like Kawasaki’s disease, an inflammatory disease that can cause limitations in blood flow.

During that roughly two-month period, four children died from conditions related to COVID-19. Every death is heartbreaking. But it made me wonder… what’s the context?

During that same period, hundreds of children died from abuse and neglect. And during the 2019–2020 influenza season, there were a total of 185 pediatric deaths caused by influenza.

I’m a parent. Watching my children struggle with remote e-learning was terrible. They regressed, and it was physically, emotionally, and developmentally bad for them.

They are more at risk of getting sick and being hospitalized from the flu than COVID-19. It has forced me to consider other schooling options where I can be certain the doors will be open five days a week.

The damage to children is far greater if the schools are closed in the fall. If it were up to me, the school bell would be ringing.

We last talked about Waymo, Google’s autonomous driving division, back in May. Waymo had just released the fifth generation of its self-driving technology and followed that up by taking in $750 million in outside investment. At the time, I predicted that Waymo would announce at least one major commercial partnership this year.

Waymo just announced an exclusive agreement with Volvo. The two will partner to launch a self-driving ride-hailing service. Volvo will produce the cars. Waymo’s tech will make those cars drive themselves.

The two are targeting Level 4 autonomy with this service. That means the cars can drive themselves from Point A to Point B in a well-defined geographic area under reasonably good road conditions – which largely means no severe weather.

Level 4 is one step down from full autonomy (Level 5). At Level 5, self-driving cars can go anywhere, anytime, irrespective of conditions or weather.

With Level 4 autonomy, a self-driving car could handle our long-distance commutes on major highways as well as shuttle us around town in larger cities that are properly mapped. Going to the grocery store would no longer be a task.

What’s interesting here is that Volvo is touting safety. Volvo has built its brand on safety over the decades. And now Volvo is saying that self-driving cars will further improve safety on the roads.

I find it a little ironic that the company claiming its cars are the safest choice for drivers is now saying that cars are safer without human drivers.

But Volvo is correct.

What also jumped out at me is that the deal did not mention when the service would launch. That’s amazing considering NVIDIA and Mercedes just said their self-driving cars will be ready for the 2024 models. We talked about that last week. Plus, Tesla is on track to release a fully autonomous software update to its cars by the end of this year.

Could it be that Waymo’s technology is behind?

Possibly. But the fifth-generation release of its self-driving tech looks solid. It is more likely that Volvo is just not able to move as quickly.

Either way, this is the most meaningful agreement that Waymo has put in place to date. That’s one more sign that self-driving cars are much closer than most people realize.

And I like the ride-hailing angle. I’m curious to see how far the two companies take this and what markets they enter.

Will they focus on mainland China? After all, contrary to what most think, Volvo is owned by Geely, which is based in China. Will the service appear in Sweden, where Volvo is headquartered? Or will they jump right to the U.S. and compete directly with Uber and Lyft?

Microsoft just put out a press release announcing that it is taking a “new approach” to retail. In fact, the company is making a “strategic change.”

Here’s Microsoft’s big move: The company is closing all its physical Microsoft Store locations in the world. Every single one of them.

Well, to be accurate, Microsoft is keeping exactly four stores open. But they won’t sell any products. They will be there just for the “Microsoft experience.”

What “experience”? Is it referring to the notorious blue screen of death on Windows?

Microsoft first launched its retail store initiative in 2009. It was a grossly obvious replica of Apple’s model, which has been a smashing success. Apple stores consistently rank among the top retail locations in terms of sales per square foot.

Though Microsoft tried to copy the model, it could not replicate Apple’s success. It just couldn’t get the format to work – that’s something Apple has always done well. It has created an incredible brand and an amazing user experience.

Microsoft stores were an abject failure. But the company is trying to spin this as a “strategic change.” Right…

We had an idea this was coming when U.S. states started lifting their lockdown orders. Apple started opening its stores back up. Microsoft did not – its stores remained shuttered. Now we know why.

As a result of this decision, Microsoft is taking a pretax charge of $450 million. That’s the total cost of closing all the stores.

Of course, that’s not a big deal for the company, which is sitting on nearly $134 billion in cash and short-term investments right now. Still, it’s quite embarrassing.

And to make matters worse, Microsoft also announced that it is shutting down Mixer, which was its livestreaming service for gaming designed to compete with Amazon’s Twitch. That’s another business Microsoft just couldn’t get right.

With a market capitalization of $1.6 trillion, Microsoft is one of the largest technology stocks today by valuation. And the mainstream press gushes over Microsoft. Look no further than this Bloomberg Businessweek cover from May of last year. 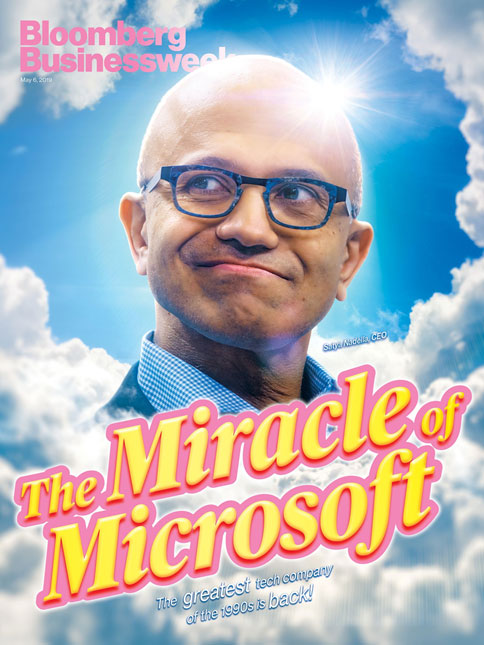 I see something different.

This company simply isn’t doing anything truly exciting. And as we just saw, it’s failed at some key projects it took on.

The one thing that it still has going for it is that it is truly a monopoly for its Office software. It can continually extract rent from its customers worldwide.

But the day will come when the world stops using Windows and the Microsoft Office suite of software. One day, we will no longer have to use Word, PowerPoint, and Excel every day.

And when that day comes, we’ll see what the big softie is really made of…

The second generation of CRISPR genetic editing is heating up…

I was one of the first analysts to speak publicly about the investment potential of CRISPR genetic editing technology. I profiled CRISPR technology publicly in February 2016 in Exponential Tech Investor. Since then, best-in-class CRISPR companies have returned as much as 400%+.

And last month, we talked about how the “second generation” of CRISPR companies are now popping up. Among the best of these is Verve Therapeutics, which I have been tracking for a couple of years now.

When we spoke last month, Verve had just raised $63 million in its second venture capital (VC) round. Now Verve Therapeutics just released some incredible research from preclinical testing of its base editing technology.

Remember, base editing is like CRISPR except it doesn’t cut the DNA. Instead, it can go in and change the “letters” in the DNA, which in turn can generate the desired effects.

In research just released, Verve demonstrated that it was able to “knock out” two genes in monkeys associated with “bad” (LDL) cholesterol. As a result, the monkeys’ LDL cholesterol levels fell as much as 60%. And their triglycerides level plunged as much as 65%.

As we know, high LDL cholesterol and high triglycerides each increase the risk of heart disease and stroke. This initial research shows that Verve’s base editing therapy may dramatically reduce these health risks. And there were no serious adverse effects at all. The therapy was safe and well-tolerated by the monkeys.

And here’s the exciting part – the two genes targeted in monkeys are also present in humans. That means there’s a good chance Verve’s therapy will work well in us also.

So this is an incredible development. The market for cholesterol-lowering drugs today is nearly $20 billion per year. That’s massive.

Verve Therapeutics could grow its revenues to $1 billion or more annually just by capturing 5–6% of this market with an approved therapy. That’s how promising this company is.

We will continue to follow Verve’s story in these pages. Like our first-generation CRISPR companies, Verve Therapeutics will make for a great investment target when the time is right.

P.S. While second-generation CRISPR companies like Verve promise to be terrific investments for us in the next 12–18 months, there is a class of biotechnology stocks that are primed to explode higher in a much shorter period of time.

I call these biotech stocks “timed stocks” because they come with a “timer” attached to their share prices. When the timer hits zero, these stocks can climb hundreds of percent in days and sometimes hours.

That may sound too incredible to believe. But some of my readers made 432% last December from one of these timed stocks after holding for just 41 days.

And just last week we saw another timer hit zero. We are up triple-digits as I write this.

It all comes down to a trading system that I spent about five years developing. My mission with this system is to bring venture capital-like gains to everyday retail investors.

And on July 15 at 8 p.m. E.T., I am going to go over the nuts and bolts of my system for trading this class of biotech stocks. We are calling it Timed Stocks Accelerated.

There, I will be sharing with readers exactly how these “timed stocks” work and how we can reap massive gains on them in a very short period. I will also reveal when my next timed stock is set to explode higher.

If you are interested, the event will take place on July 15 at 8 p.m. ET. Simply go right here to get all the details.