Reading the above work duties, it would be logical to conclude that the above would be part of a job application for the FBI, a SWAT team, the police, or even the CIA.

But it’s not. These are the duties that were posted days ago for new positions being recruited for by the Internal Revenue Service (IRS). That’s right, apparently the IRS thinks that it needs agents “willing to use deadly force” related to taxpayers who they believe aren’t correctly filing their taxes.

I wish I was making this up, but the newly minted Inflation Continuation Act of 2022 Inflation Reduction Act of 2022 provides for $80 billion in spending to add 87,000 new IRS agents, including the position listed above. That’s more than double the current size of today’s IRS, and it is more than 6.3 times more money than the current annual IRS budget of $12.6 billion.

The thinking is that if they spend $80 billion of taxpayer dollars to add 87,000 new IRS agents, it will generate more than $200 billion in new revenue for the government.

The common refrain that we’ve been hearing in the media recently is that “we need to make sure that the billionaires pay their fair share.” But that’s just the narrative. The reality is quite different.

This is scary. For anyone who has been through an audit, it’s not pleasant. We’re presumed guilty and are required to prove that we filed our taxes properly at our own expense. Reams of questions are asked of us, most of which are unnecessary and irrelevant.

The questions demonstrate that little to no effort was made by the agent to thoroughly research a case.

The current $80 billion plan to add 87,000 new IRS agents reminds me a bit of flawed shopping logic that makes me chuckle now and then. If someone goes out and buys something that they really don’t need that costs $1,000 at a discount price of $700, did they really “save” $300? Nope. They spent $700 that they didn’t need to spend.

The U.S. tax code is 6,871 pages long and incredibly complex. If we add in federal tax regulations and other tax guidance, it balloons even further to about 75,000 pages. Incomprehensible and absurd.

Here’s a novel idea. Radically simplify the U.S. tax code and reduce the budget of the IRS by 80%, which would save U.S. taxpayers more than $100 billion over the next 10 years.

Aside from saving taxpayers an immense amount of money, there would also be a massive productivity boost.

Americans spend more than 8.9 billion hours a year doing their best to comply with the IRS tax code. This comes at an expense of more than $400 billion. I’m pretty sure we can find a more productive use for our time and our money to invest in productive activities.

I fully acknowledge that’s probably wishful thinking. I gave up on trying to do my taxes by myself three decades ago. It quickly became too complex for me to have the confidence that I was doing it correctly.

In the meantime, my best advice is to hire a great tax accountant who can help you get it done correctly. With the regulations as complex as they are, and they are changing annually, I’ve always felt that I needed to work with a tax professional to ensure I’m filing correctly.

While taxpayers like us and small business owners will feel the brunt of this pain, not everyone is a loser.

This is only the seventh nuclear design that’s ever been approved in U.S. history. It’s a step in the right direction towards building a decentralized, carbon-free utility scale power grid with advanced and safe nuclear fission reactors.

Regular readers may remember NuScale Power. We first talked about the company back in September 2020. That was when NuScale revealed its small modular reactor (SMR) design.

These are small reactors that can be mass-produced at a central factory and then shipped to sites for installation and deployment.

The advantage here is that it would make the construction of nuclear reactors much easier and far cheaper than it has ever been.

For comparison, every nuclear reactor up to this point has been a massive, custom-designed plant that was manufactured on-site and pieced together. That’s why nuclear reactors have been so incredibly expensive to build (billions).

NuScale’s approach is a paradigm shift in nuclear power. And the NRC’s certification paves the way for NuScale to deploy its first SMR.

That said, there’s no guarantee it will happen.

There has been a ton of political pushback against new nuclear fission reactors in the U.S. for decades. NuScale will have to overcome this before it can get final approval to deploy.

That said, perhaps the political winds are finally shifting given what’s happening today.

Both the U.S. and Germany have been forced to turn coal plants back on in the last year. Without nuclear power and natural gas, Germany has no choice but to return to coal in an effort to recover at least a portion of the energy deficit.

And the U.S. has increased its use of coal for the production of electricity production to 25% in the last 18 months. This was done to offset the dramatic reduction of natural gas production.

This is a direct failure of green energy policies that require power companies to produce a large percentage of their electricity from renewable energy sources – mainly solar and wind – which cannot reliably provide utility-scale electricity production.

I’m a big proponent of clean energy myself. Whatever approach that is taken, however, must be able to provide baseload electricity production 365 days a year 24/7. There’s nothing “green” about policies that force us to fire coal plants back up.

So we are seeing a clear divide between energy policies that work… and those that don’t.

If we look at France, it generates 70% of its electricity from nuclear, another 11% from hydro, and only 7% from natural gas. Better yet, 17% of electricity is generated from recycled nuclear fuel. This is because the country has always had a strong policy on energy security, and the rest of Europe is about to find out how smart the French have been.

France is a remarkable example of a country with clean, carbon-free electricity production, enough to fuel an entire country. This approach is a far better alternative to more coal.

So I’m hopeful that NuScale can in fact begin deploying its SMR technology. Ironically, I suspect that it will find more receptive markets outside of the U.S.

That said, this isn’t an investment recommendation for NuScale.

The company is currently valued at $3 billion. Yet it will only make about $16 million in revenue this year. That means it’s trading for over 185 times sales right now. That’s insane.

And even if NuScale can navigate the political headwinds, it would be at least two years before the company would generate material revenues. Its valuation will almost certainly fall between now and then.

Still, we’ll track this story closely. Necessity and dire conditions can quickly lead to major shifts in political narratives, which means an investment thesis can also change just as quickly.

Technically speaking, GAUDI is a neural network that creates 3D representations of text. But rather than just a text-to-image generator, GAUDI is capable of incorporating verbs/actions in a way that creates 3D environments.

We have explored text-to-image technology quite a bit in The Bleeding Edge. We recently had a look at Google’s text-to-image AI in June. And we talked about OpenAI’s DALL-E back in April and again last month.

If we remember, both can create incredibly lifelike images just based on text input.

For example, here’s the image that Google’s AI created from the following prompt: “A photo of a raccoon wearing an astronaut helmet, looking out of the window at night.” 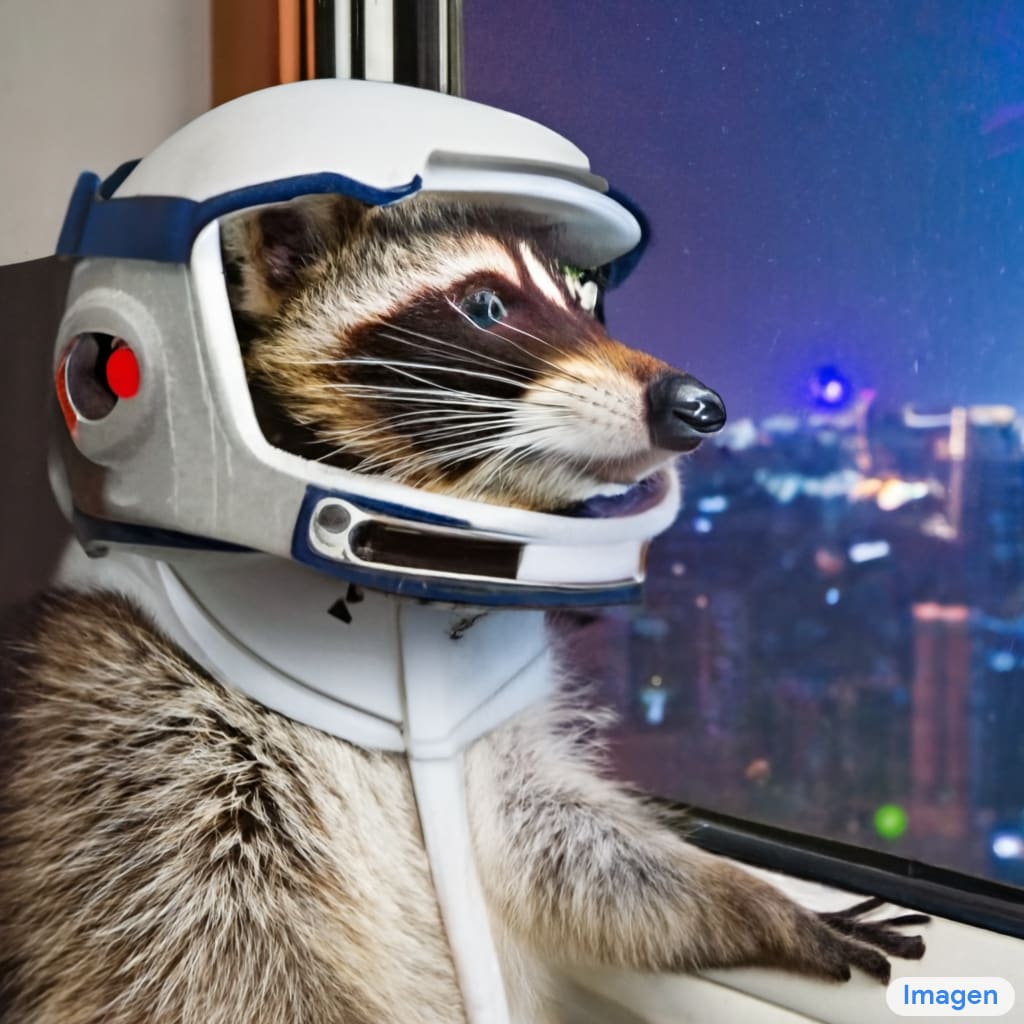 It’s incredible to see the AI produce such a creative, lifelike image just from text.

But Apple’s GAUDI takes it to a whole new level. Instead of 2D images, GAUDI generates 3D videos based on text.

Here we can see Apple’s AI generating video based on the prompts “Go through the hallway” and “Go up the stairs.” This is happening in real time. What a powerful generative engine.

And it doesn’t take too much imagination to realize what Apple’s up to with this.

As we know, Apple is gearing up for a big augmented reality (AR)/virtual reality (VR) launch. We can expect more information about Apple’s AR/VR headset next month. There’s a chance that we’ll hear some news at Apple’s major annual iPhone product release event currently scheduled for September 7.

If we think about the process of building 3D virtual worlds for immersive AR/VR content, historically it’s taken years and millions of dollars just to produce one game or application.

Well, a text-to-video generator like GAUDI can largely automate the process. This is an incredible tool that could crank out content for virtual worlds extremely quickly – and cheaply.

So this research shows us that Apple intends to be a major player when it comes to producing programming and content for next-generation games and applications in virtual worlds.

This is right up Apple’s alley.

We’ll wrap up today with a topic that’s been very popular amongst Bleeding Edge subscribers. Helium and FreedomFi just got their crowdsourced 5G network off the ground.

As a reminder, this network runs over the unlicensed spectrum (3.5 GHz) that wasn’t auctioned off to the wireless carriers. It is called Citizens Broadband Radio Spectrum (CBRS).

Helium and FreedomFi are using blockchain technology and crypto economics to incentivize consumers and businesses to install the hardware needed to build the network. That’s the crowdsourced part.

This requires consumers to buy a prepackaged 5G gateway and radio that acts as a mini cell tower. Right now, the cost is about $2,500.

And anyone who installs the gateway will earn Helium’s HNT token as a reward. As I write, HNT is trading at $7.72 per token.

I love the idea. This network can offer 5G service to consumers for far cheaper than what the big wireless carriers charge.

The only question is whether the project will attract enough participants over a wide enough geographical area. The coverage won’t be directly competitive to the wireless carriers unless enough consumers install the hardware.

Yet it’s off to a good start. Here’s a look at the early coverage map: 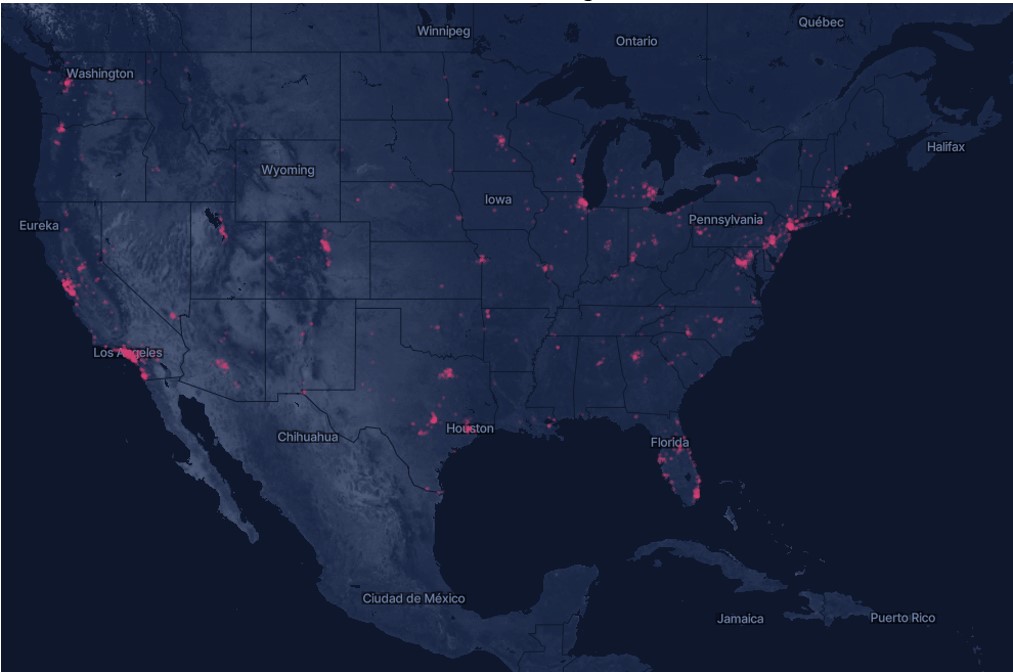 Here we can see that the network is starting to build out in the U.S. Right now, there’s relatively strong coverage in populated parts of California, Texas, Florida, and the northeast.

This is fantastic, considering the network just launched. And the more the network grows, the more of a competitor to the wireless carriers it will be.

And the reality is that it may not need to provide nationwide coverage comparable to the commercial carriers to be a useful network. Most of us spend the vast majority of our time in and around where we live rather than traveling week in and week out.

And what’s really exciting is that a crowdsourced network like this is not controlled by a government, or by a corporation. The network, by definition, can’t be censored, banned, or shut down by tech companies or by a government agency.

It has the exciting potential of becoming a massive communications network built by the people, for the people – hence “FreedomFi.”

For those who are interested in contributing to this exciting project, you can go to the Helium website and find the links to vendors who are selling the 5G-enabled equipment required to set up your own cell “tower.”