I was thrilled yesterday, as I’m sure many of us were, when I saw the news that U.S. District Judge Kathryn Kimball Mizelle struck down the current mandate for masks on public transportation in the U.S.

The grounds of the ruling were based on the fact that the implementation was a violation of administrative laws. The judge was rational and thoughtful in outlining how the mandate would “constrain their choices and actions via threats and civil and criminal penalties.” “Their” was a reference to us, those of us living in the U.S.

This ruling was important not just for the U.S., but for the world.

Without the removal of the mandate, it would make it difficult to remove mandates for international travel to and from other countries. The U.S. was the “kingpin” that needed to fall so that everything could open up and return to pre-pandemic norms for travel.

Needless to say, this was long overdue.

The repeated extensions of the mandates were ignorant, and not in any way based on scientific research. They harmed the economy, and individuals, and made work absolutely miserable for those working in public transportation. And most importantly, they didn’t make us any “safer.”

What happened immediately after the ruling was announced, though, was incredible. The airline companies rushed to put out press releases and announcements on social media declaring that masks are no longer required on domestic flights. Here’s an example below from United Airlines: 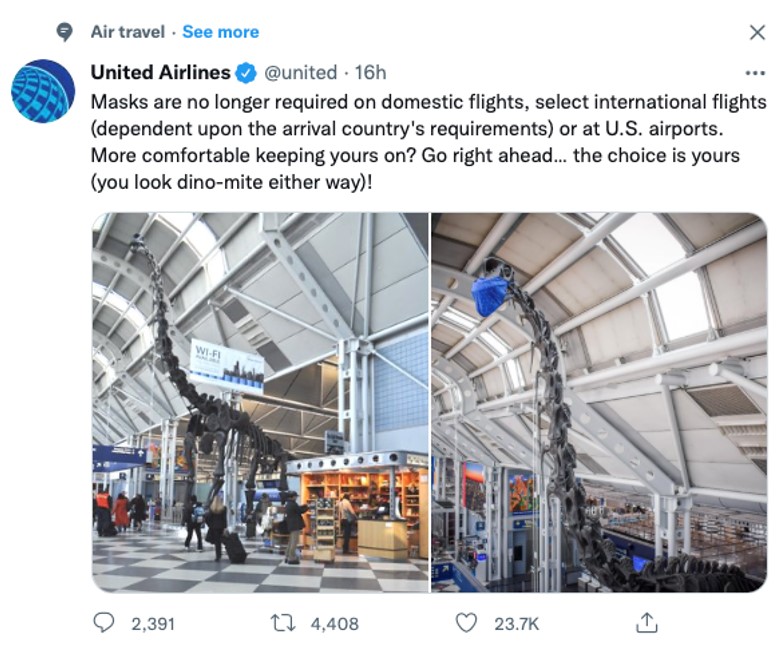 All of the major airlines moved quickly. They didn’t want to take a chance on the White House or the Centers for Disease Control and Prevention (CDC) trying to reverse the decision. They knew that the quicker they acted, the less likely they would be to reverse course.

And it wasn’t just the airlines. Amtrak quickly announced last night that masks would be optional on their trains. Even better, just this morning, both Uber and Lyft jumped on the bandwagon and declared that they too were ending the mask mandate for their ride-hailing services.

Why so suddenly? How is it that these bastions of “safety” have all taken a firm stance to end the mandates?

There are two clear reasons.

The first is that there are no longer any federal handouts for the public transportation industry. No need to “toe the line” anymore to receive billions in aid.

And the second is far more obvious, something that most of the population now understands very well… It can be summed up in one simple chart based on CDC data: 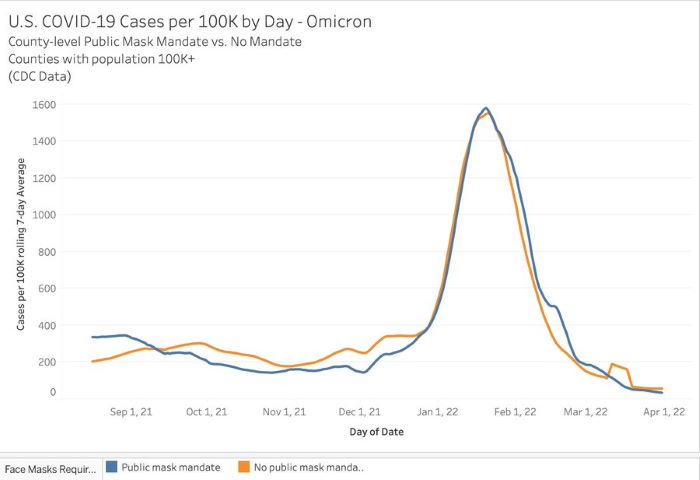 Put simply, the masks did not in any way stop the spread of an aerosolized virus like COVID-19. Period. There was no difference in spread between counties that had public mask mandates and those that didn’t.

The reality is that scientific research had already determined this in two high-quality randomized controlled trials back in 2020. One was in Denmark, and the other was conducted on Paris Island in South Carolina.

We had the data, we understood the science, but it was sadly ignored, censored, and even banned.

But Omicron was a remarkably powerful agent of truth. Even with very high rates of COVID-19 “vaccinations” (i.e. experimental drugs) and mask-wearing, the above chart tells us everything that we need to know.

We all sacrificed, we played team, tried it all, it didn’t stop or even slow the spread, and now we’re done – masks are optional as they should have been all along. And hopefully next time, we will actually follow the scientific research, and never do this again.

We talked about DALL-E back in January of last year. As a reminder, this is an artificial intelligence (AI) system developed by OpenAI that can generate images from text. Users simply tell the AI what they want to see, and the AI creates the image from scratch.

Last year, DALL-E was remarkably good at producing basic images of single objects like a chair or a cat. However, those images look almost archaic compared to what the upgraded version of DALL-E can do. Check this out:

The AI created this image in response to a request for “Teddy bears mixing sparkling chemicals as mad scientists, steampunk.”

Talk about a specific, yet complex, request – but DALL-E nailed it. The first version couldn’t come close to anything as complex as this.

This is what the AI produced in response to “Shiba Inu dog wearing a beret and black turtleneck.”

This looks incredibly lifelike. It could be a photograph of someone’s dog. But the AI created this entirely from “memory.” That’s what is so impressive.

This new-and-improved version of DALL-E also comes with an “edit” feature. After the AI generates an image, users can add items or make changes at will.

For example, the person who asked DALL-E to create the Shiba Inu image could tell the AI to make the beret a different color or maybe add sunglasses.

Then the AI would make those changes within milliseconds. And if users don’t like the edits made, they can change or undo them just as quickly.

This new generative AI is extraordinary, to say the least. It is capable of producing original art/design in a matter of seconds.

It’s not hard to imagine how technology like this can compress the creation and editing of design-quality images to mere seconds. This is a process that would take hours, days, or even weeks when done manually by a designer.

And with generative AI like this, anyone can create unique images and art.

It’s not yet available to the public, but we’ll start to see this tech put to use soon. OpenAI will be licensing out the technology to other tech companies that will leverage the AI. Companies that produce software for designers and artists will likely adopt technology like this as a way to enhance creativity.

And I’m sure that there will also be some fun consumer applications that leverage this technology. I can even imagine integration with common social media applications. GIFs are so popular these days, I can imagine that consumers would love to be able to create a custom GIF or image to add some pizzazz to their text.

What happens when self-driving cars get pulled over…

The autonomous driving industry hit a major milestone in February when Cruise launched an autonomous ride-hailing program in San Francisco.

If we remember, the service runs between the hours of 10 p.m. and 6 a.m. Pacific Time. And it allows locals to catch a ride, just like an Uber, from one of Cruise’s fully self-driving cars.

In February, I pointed out that Cruise’s self-driving technology was clearly ready for prime time. San Francisco is a notoriously difficult city to navigate. Cruise would not be launching self-driving cars in the city if they couldn’t handle the complex street patterns.

But something pretty hilarious just happened that wasn’t expected…

The first self-driving car just got pulled over by a police officer in San Francisco. The car simply neglected to turn its headlights on. Here’s how the encounter went down:

I got a kick out of this. The officer gets out and approaches the car just like normal. But then he does a double-take when he sees that nobody is in the front seat. He tries to open the door, but it’s locked.

So he goes back to his police cruiser to figure it out… and the self-driving car drives off. Then it puts on its emergency lights and pulls over again.

It turns out that the car was just looking for a safer place to pull over. The AI wasn’t comfortable with where it was, so it drove forward until it found a better place to stop. That’s pretty smart.

As we can see, the police officer followed the car and proceeded to inspect it again with his partner. They determined that there was nobody inside the vehicle… but they didn’t know what to do next. Both officers got on their cell phones and presumably called back to headquarters for guidance.

This raises an interesting question. What happens if a self-driving car commits a traffic violation or gets involved in an accident?

And if there is a citation or fine involved, who receives it? Is the car’s owner at fault? Is it the car manufacturer? Or is it the company that produced the self-driving software?

These are issues that we still need to address from a policy standpoint. We aren’t quite there yet.

That said, this isn’t that difficult of a problem to solve.

Self-driving cars operating in a ride-hailing network are connected to a central hub using wireless networks. There’s a human in a command center somewhere who can take control of the car and communicate to passengers – or a police officer – when needed.

I tested this out myself when I experimented with Waymo’s autonomous ride-hailing service in Phoenix, AZ.

There was a button in the car that passengers can press if something goes wrong. So I pressed it. The car immediately pulled over and someone called in to ask if everything was OK.

I responded that it was, and we completed the ride. But I walked away confident that Waymo had a solid plan to address any emergencies that could happen.

It’s a sign of the times when these types of issues are being addressed. Self-driving tech has made incredible strides in the last two years and is getting ready for primetime. Now we’re thinking about outlier situations and which entity will be paying for insurance, which are relatively easy problems to solve.

And that means profits are just around the corner as well. Go right here for one of the best ways to invest in this trend…

We have been talking a lot recently about what I call the “Great Recalibration.”

Simply put, we are in the early stages of reversing the decades-long trend of centralizing manufacturing in mainland China and Southeast Asia.

Due to recent supply chain shocks, corporations are being forced to recalibrate their manufacturing strategies and bring manufacturing back onshore, closer to end markets. Doing so means more resilient supply chains that have added benefits like reduced carbon emissions and job creation.

That’s the Great Recalibration… And Apple is now a part of it.

Apple just announced that it will produce the iPhone 13 in India. This is huge.

Up to this point, over 95% of Apple’s manufacturing has happened in mainland China – which has worked just fine for the last 15 years. But government responses to the COVID-19 pandemic exposed the fragility of this centralized model.

Weeks ago, Apple’s contracted manufacturing plant in Shenzhen, China, had to temporarily shut down again due to the Chinese government imposing more heavy-handed lockdowns.

Apple has had a material impact to its business as a result. Recently, it reduced sales estimates by $6 billion due to decreased production levels.

For several years now, the tech giant has had just over 3% of its global manufacturing in India for some of its lower-end phones. And that number is expected to jump to about 7% by the end of this year. This would be a great start.

And I expect this to be just the first of many similar announcements to follow. We will see Apple establish highly automated manufacturing locations in the U.S., most likely through partnerships with companies like Foxconn, over the next few years as well.

The Great Recalibration has entered a period of acceleration thanks to the pandemic, and it has been further catalyzed by the latest geopolitical tensions. Corporations around the world are quickly scrambling to adjust to this new reality.

This could be the most important trend of the 2020s.