Last night, I opened up my Private Deal Room to share my perspective about the power of private investing… even when stock markets are down.

I know many of us are looking for ways to put our portfolios back into the green… and fight the troubling inflation still impacting our wallets. Private investments are one of the best ways I personally know that can do just that.

Private deals aren’t without risk, but when even just one of our investments succeeds, it can create 10X gains or more. That’s simply not possible in most other asset classes.

And over the long run, these kinds of deals are how we can ensure the financial security of ourselves and our families.

And I even shared the name of the next company I’m planning to recommend to my paid subscribers with everyone who attended. It is hands down one of the most exciting projects that I’ve ever done.

It’s a company that combines two traits that are rarely found together – the upside of a small, high-growth company and the low risk profile of a very well-established business with high gross margins. I can’t think of a better combination for a market environment like the one we’re in today.

I’d like to encourage anyone who wasn’t able to tune in to catch up on all the details before the replay goes away. Please go right here to catch up and watch.

I’m confident that your time will be well spent, and you’ll come away with valuable information.

And I’d like to send a sincere thank you to the readers who’ve decided to be part of this incredible journey that we’re taking in a world that has been off-limits to most for so long – private investing.

It is the most difficult work that I do, and it is also the most rewarding.

We had a look yesterday at how the gaming industry has been on fire in the venture capital (VC) space despite the current economic environment. Huge amounts of private capital have been pouring into gaming.

That’s right. Venture capital funding has been flooding into the biotech sector.

I know that may sound crazy given how poorly publicly traded biotech stocks have performed over the last 16 months or so. Pandemic policies nearly brought clinical trials to a halt, resulting in what I’ve referred to as a “biotech winter.” But this chart tells the story: 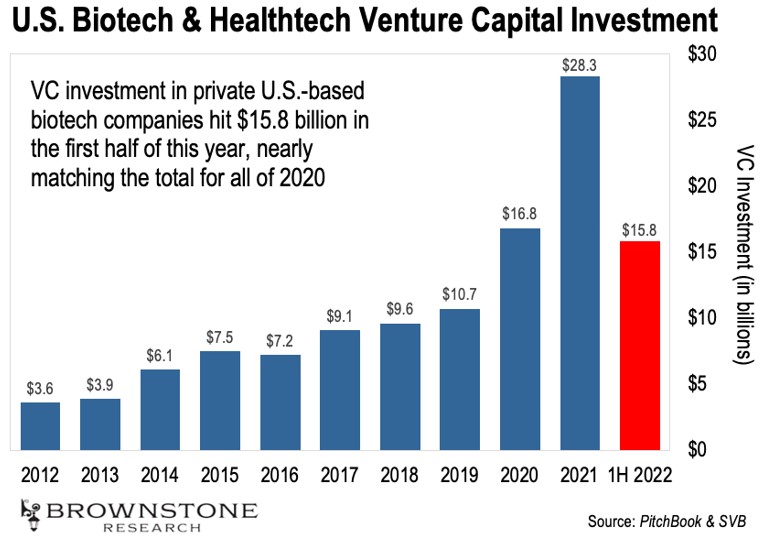 And already this year we have seen $15.8 billion of venture capital investment pour into the biotech space. That nearly matches the total for all of 2020.

The first half of this year would amount to the third highest year in history, and we’re only halfway done. And if the current pace continues, 2022 will be another record year.

So what’s going on? There are actually two reasons. The first is that the smart money knows that the impact of the pandemic policies on the industry were only temporary. And while they may have slowed down clinical trials, they didn’t slow down therapeutic development and advancements in biotech.

The second reason is that they also see what we’ve been writing about extensively in The Bleeding Edge – the impact of convergence on biotech.

The confluence of bleeding-edge technologies like artificial intelligence (AI), machine learning (ML), and synthetic biology is rapidly accelerating the process of therapeutic development.

And they’re able to now do it in a fraction of the time than what was normal for biotech. That means that drugs can be discovered, tested, and commercialized in a time frame that shaves years off the normal timeline, and also saves hundreds of millions in development costs.

The VCs have a clear view of this trend taking shape simply because they can see what’s happening behind closed doors with the next-generation biotech startups they are funding. That’s why they have been so bullish on biotech even when the sector has been left for dead in the public markets.

And as more evidence of this – biotech is the only sector I’ve noticed that continues to see the median size of its VC rounds increase. That means private biotech companies are commanding consistently higher valuations in their seed and Series A rounds.

That’s just not the case for any other sector that I’ve noticed. Everybody else is experiencing a compression in valuations.

This is a very valuable signpost for us. It gives us insight into what’s happening behind the scenes in the industry.

What’s more, this gives us reason to be excited about what’s going to happen over the next 12–24 months.

The biotech industry has turned a corner. Since June, it has snapped out of its downtrend and finally started to trade higher. And such large private capital inflows into an individual sector will always precede the next bull market.

Previously inaccessible to all but a few… OpenAI just opened up access to its artificial intelligence, DALL-E 2, for all to use.

For the sake of new readers, DALL-E 2 is OpenAI’s next generation image generator. Users simply tell the AI what they want to see in whatever descriptive language they want to use, and the AI creates images from scratch in a matter of seconds. And the images are both creative and incredibly lifelike.

We used an example back in April where somebody instructed the AI to produce a “Shiba Inu dog wearing a beret and black turtleneck.”

Here’s what the AI came up with:

Incredible, right? This looks like a photograph of somebody’s dog. But DALL-E 2 created this in a split second from scratch based on that simple description.

Even better, DALL-E 2 comes with an “edit” feature. After the AI generates an image, users can add items or make changes at will.

OpenAI kept access to DALL-E 2 very restricted at first. But that just changed. OpenAI has launched the beta version of a commercial product around DALL-E 2.

One million people who were on the waitlist can now access the AI-based image generator. And OpenAI is launching the product with an interesting credit-based structure.

Users will get 50 free credits in their first month and 15 new credits every month after that. Each credit is good for one text prompt, which will return four images.

This is clearly priced at levels that pretty much anyone can afford. It is meant for the mass markets. I can even see how its functionality can easily be built into software applications that might want to incorporate image generation.

It’s apparent to me that OpenAI is pricing credits based on a multiple of its computational costs, which are not much. And I’m absolutely certain that the business will generate very high margins, even at these low rates. It’s a win-win for everybody.

And there are much bigger implications here…

DALL-E has the power to turn the graphics design industry on its head very quickly. Images that used to take hours or days to produce will now take seconds. And the images very well could be of even higher quality. This will reduce the cost of high-quality graphics production by more than 99%.

What’s more, anybody can do this. No one needs to go to art school or go through formal training. No one needs to spend countless hours honing their skills. Instead, the AI will do all the work.

I’m betting that this product absolutely takes off.

If we think about what made social media so popular, it was the fact that people could quickly send videos, images, and messages to a large number of people in a matter of minutes. In other words, social media made everyone a creator without much effort at all. It’s a form of instant gratification.

Well, this technology enables the same kind of experience.

DALL-E will make everyone a graphics designer and an artist. I think the commercial product will be wildly successful. If this were an investment opportunity, I’d be all over it.

And OpenAI will be able to build upon it to create even better offerings in the near future.

One of the worst business ideas I’ve ever seen…

We’ll wrap up today with something that really struck me as a terrible business idea.

The auto industry seems to be trying to set a precedent for a petty subscription model. My advice to readers is that we should put our foot down and just say no.

Just a few days ago, BMW announced that it started selling subscriptions to use the heated seat feature in its cars. The cost? $18 per month.

I’m sure many readers are familiar with the heated seat feature in newer cars. Typically, there are three settings – low, medium, and high. We just press the setting we want, and our seat heats up accordingly. It’s a great feature for those of us who live in colder climates.

This is the exact same feature that BMW now wants to sell subscriptions for in its cars. To be clear, BMW will build the heating feature into the car, but it won’t allow the owner of the car to use that feature unless they pay the subscription fee. How absurd is that?

Clearly, this is something of a desperate move. Carmakers are seeing their manufacturing costs increase substantially due to inflation and supply chain issues. This is squeezing their margins, which reduces their bottom line.

It appears BMW’s solution is to try to extract revenue from customers in other ways. This is simply an attempt to nickel and dime us for basic features.

For me, this kind of thing is a line in the sand. I will not purchase any cars that require subscriptions to access the features that are already built in.

And that’s the key here. If the features come preinstalled as a part of the price we pay and require no future updates, there’s no justification to charge consumers a subscription for them.

On the other hand, if the carmakers produce advanced technology that requires constant software updates, that’s a different story. Look at Tesla’s Autopilot as an example.

As regular readers know, Autopilot is Tesla’s self-driving software. It was incredibly expensive to develop, and it requires constant updates to ensure peak performance and safety.

Essentially, Autopilot is a software as a service (SaaS) offering. It makes perfect sense for Tesla to sell it using a subscription model. It has a single payment, perpetual software fee, or for those who want to space out payments, a monthly software fee.

So if BMW wants to explore its own self-driving offering on a subscription basis, I have no problem with that whatsoever.

But $18 a month for heated seats? You have to be kidding me.

I really hope this is a trend that doesn’t catch on in the industry. As consumers, let’s make sure we just say no thank you. It’s a deal breaker.

P.S. For those who missed it, the replay of our Private Deal Room event will be available for a brief time. I highly encourage all readers interested in early stage investing to check it out right here.