Today, we’ll take a break from vaccines and viruses, fear and panic, and bid farewell to an iconic “member” of the scientific community – the Arecibo Observatory in Puerto Rico.

Built in 1963, before I was born, I grew up knowing it was a place of legendary discoveries. Arecibo literally discovered the first exoplanet – a planet outside of our own solar system. It has also been instrumental in mapping near-Earth asteroids to determine if they might pose a threat to our planet.

And perhaps Arecibo’s most ambitious use has been in the search for extraterrestrial intelligence. The idea of extraterrestrial life may have seemed a bit “out there” back in the first few decades of its operation.

But today, we have now mapped thousands of exoplanets capable of supporting life, and we have calculated that there are literally millions across the Milky Way galaxy.

Perhaps the idea to search for life beyond our planet was not so crazy after all, considering that it is a near certainty that such life exists.

This particular application was popularized in the movie Contact back in 1997. The Arecibo Observatory was even featured in the film. And that wasn’t the first time Arecibo made it to the big screen. A couple of years before Contact, it was a key part of the plot in the James Bond film GoldenEye.

What made Arecibo special was its sheer size. At a width of 300 meters, it was capable of detecting and “seeing” asteroids less than a kilometer wide. That’s no easy feat considering the scale of our own solar system.

And up until just a few years ago, Arecibo had been the largest full dish telescope in the world. The Five-hundred-meter Aperture Spherical Radio Telescope (FAST) situated in southwest China now holds that distinction.

But the last few months have been difficult.

In August, a cable supporting the instrument dome fell and damaged the dish. That was followed by a larger cable that broke and caused even more damage.

And yesterday, sadly, it all came down. The cables snapped and the telescope collapsed. There was simply no way to repair it safely.

Aerial View of Damage to the Arecibo Observatory 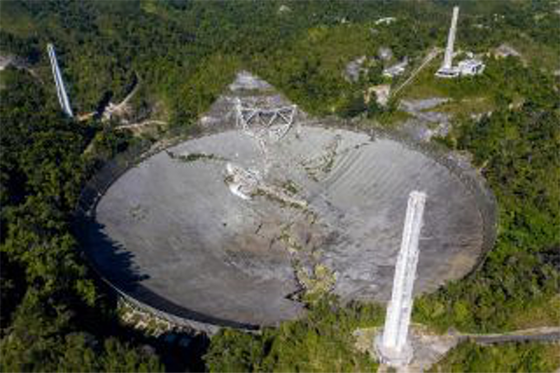 It is rare that a scientific instrument like Arecibo is able to play such a prominent role for so many decades.

Its contributions have been enormous, so we can bid farewell with a smile and good memories. And we’ll keep looking directly to the future of space exploration.

Possibly the biggest scientific development of the century…

One of the biggest scientific developments of the century was just announced. I can’t emphasize enough how important this is.

Google’s artificial intelligence (AI) subsidiary DeepMind just announced that its latest AlphaFold software can accurately predict the folding of a protein, based solely on its amino acid sequence, with 92.4% accuracy.

To illustrate why this development is so critical, let’s start with a little background…

Proteins are long chains of amino acids. They are responsible for every function a living organism’s body performs.

And a protein’s structure tells us how it will impact living organisms, including humans. The structure also determines what other compounds (such as pharmaceuticals) the protein can bind to. With this information, we can design the perfect biopharma therapies for any possible ailment.

However, proteins fold in very complex ways. This often makes a protein’s structure hard to analyze. Drug design has remained largely a manual, trial-and-error process for this reason.

Nobel Prize winner Christian Anfinsen theorized back in 1972 that a protein’s amino acid sequence would determine its structure when folded. So if we could analyze the amino acid sequence, we’d know how the protein would interact with other compounds.

But at the time, there wasn’t enough computing power on the planet to analyze all the possible folding sequences. It was an impossible problem to solve.

That’s why DeepMind’s development is such an Earth-shattering breakthrough.

At that point, the best biotech companies in the world will all be using this tool. This will be a key stepping-stone on the path to the end of human disease as we know it.

As regular readers know, I believe the 2020s will be a “golden age” for biotechnology. This development alone, combined with genetic editing technology, makes that prediction a certainty.

And if readers want to learn more about how to invest in this trend, there’s a very special event I want to put on your radar.

Next week on December 9, I’ll be presenting on the latest in biotechnology and the precision medicine trend… and how to best position ourselves to profit.

In fact, there’s one biotech company I’m watching that I believe every investor should have in their portfolio. I think we could even see it rise as much as 1,000% in a day when it releases some key results in the near future.

If you’re interested, please make sure to go right here to reserve your spot for free. I hope to see all my Bleeding Edge readers there.

If we want to understand the impact of the COVID-19 pandemic on the economy, all we have to do is look at Amazon.

Brick-and-mortar shops and restaurants were forced to close earlier this year due to the economic lockdowns across the United States. Some of those businesses never reopened their doors. They couldn’t survive without revenue. Others were forced to lay off employees and pare back expenses in an effort to make it through the year.

Meanwhile, Amazon has hired 430,000 people over the last 10 months. It is now the second largest private employer in the world with 1.2 million employees. That trails behind Walmart’s 2.2 million workers… but probably not for long.

Even more impressive, Amazon has become a utility of sorts. Rain, snow, or lockdown, Amazon will deliver consumer goods right to everyone’s doorstep in a matter of days, and, in some places, just hours. And in larger markets, Amazon will also deliver groceries from Whole Foods.

While many of us have used Amazon for years now, some U.S. consumers started to do most of their shopping online for the first time when the pandemic hit.

And they won’t be going back to brick-and-mortar stores.

When we can have virtually any item in the world delivered to our doorstep in one or two days with free shipping, it’s just too convenient to pass up. Amazon is only going to grow from here.

My prediction is that Amazon will become the first $2 trillion company in history. I believe that it will quickly surpass Walmart as the largest private employer in the world as well.

And I’ll point out that Amazon, in general, is a fair employer. It pays some of the highest minimum wages in the world. And it offers employees fantastic upward mobility.

What’s more, many of Amazon’s recent hires have been for high-end jobs. We’re not just talking about warehouse workers here. We are talking about engineers, software developers, data scientists, and supply chain managers.

Bigger picture – this is indicative of large-scale changes happening around the world. Digital-first companies are supplanting their brick-and-mortar predecessors.

This trend may be uncomfortable for us in some ways. But as tech investors, we must recognize that it presents us with a massive opportunity in the markets. And readers of The Bleeding Edge are in a position to capitalize tremendously on this opportunity.

Microsoft just patented and released its new “Productivity Score” technology. And it is creepy and invasive.

Surveillance technology has been built into Microsoft’s 365 productivity suite as a core functionality. It allows companies to “measure” how often employees send emails and chat, and it tracks how long employees stay engaged with applications like Outlook, Teams, and SharePoint.

It also uses cameras, sensors, and software tools to monitor how engaged employees are in meetings. For example, is a worker focused on the speaker, or is he or she doing something else?

Using these analytics, Microsoft then computes a “productivity score” for employees. The presumption is that employees who are less engaged are less productive.

Of course, this is a very faulty presumption. The kind of work we do throughout the day depends heavily on what our job function is.

People engaged in creative work, research, or writing, for example, shouldn’t be engaged as much in emails or chat. And they shouldn’t be bothered with too many meetings. That engagement would make them less productive, not more so.

Microsoft has even gone so far as to patent its surveillance system as applied to meetings. It calls this the “Meeting Insight Computing System,” which is equipped with cameras, sensors, and Microsoft software used to analyze how employees are behaving in meetings. 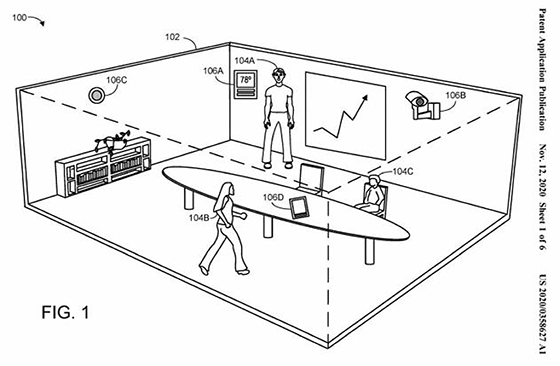 Microsoft is already marketing its arbitrary scoring system to employers. It claims these features will support collaboration and better technology experiences.

But it’s clear what Microsoft is really up to. It is taking advantage of companies’ fears that employees are not being productive now that we are in a remote work environment.

And Microsoft hopes that this will encourage the adoption of its own productivity applications over competitors like Zoom and Slack, which was just acquired by Salesforce (more on that tomorrow).

To me, this is Orwellian and evil. And when employees are aware that their employer is monitoring every behavior at home and in the office, it will result in a very artificial form of productivity as employees modify their behavior in ways that will be “scored” well by the Microsoft surveillance system.

This latest initiative reminds me of the surveillance techniques that companies like Google, Facebook, and Twitter use. This is just an enterprise version of crossing the line.

I simply can’t get behind the use of technology in this way.

I’ve managed thousands of employees over the last three decades. And I’ve found that empowering employees to do their jobs, helping to remove any obstacles, and trusting them to get the job done all inform the best approach to management.

If someone can’t get the job done, it probably isn’t a good fit, or more training is necessary. Surveillance won’t solve the problem.