China’s Chang’e 5 mission to the Moon, which we talked about on Tuesday, has been exciting to watch this week.

Yesterday, the descent vehicle successfully landed on the plains of Oceanus Procellarum with an incredible landing approach.

The landing sequence took about 10 minutes. It is incredible to see such high-resolution video of another world.

And here is an image of the surface of the moon and one of the legs of the lander. Pretty cool…

The Lunar Landscape as Seen from the Chang’e 5 Spacecraft 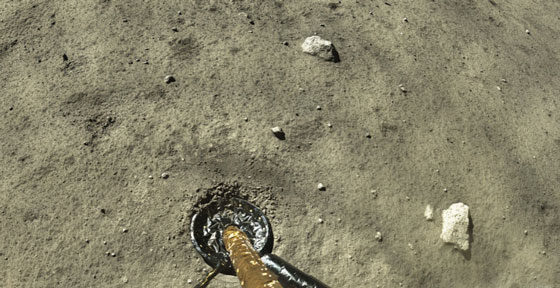 The mission is moving quickly. The drilling has already taken place, and the lunar samples have been collected and sealed. The lander actually drilled 2 meters into the moon’s surface and collected about 2 kilograms (kg) of material.

All that’s left to do is return the samples on the ascender back to the orbiter, transfer them to the return vehicle, and head back home to Earth for a mid-December landing in Inner Mongolia.

It sounds all too simple. Hopefully, the mission will be a successful one.

And if that isn’t exciting enough, SpaceX CEO Elon Musk has been in Berlin this week in support of the new Tesla Gigafactory under construction.

He was interviewed there and said that he is “highly confident” that SpaceX will land humans on Mars by 2026. He also mentioned that the company is planning on sending an uncrewed mission there within two years.

This is Starship SN8, which is a prototype of the spacecraft that will actually go to Mars. And the Federal Aviation Administration (FAA) just gave the approval to SpaceX this morning for a high-altitude launch this Friday.

The goal is to send the spacecraft to an altitude of 15 kilometers, where it will then freefall belly-down back to Earth.

It’s just a test mission. Musk only puts the chance of success at 33%. Starships SN9 and SN10 are already nearly complete and ready for the next test launches. The pace at which SpaceX is moving is remarkable.

This is history in the making.

Salesforce just turned up the heat on Microsoft’s monopoly…

Salesforce just came to an agreement to acquire workplace productivity company Slack for $27.7 billion. Make no mistake about it – this signals that Salesforce is coming after Microsoft.

This deal had been in the works for a while now. The original price tag was rumored to be $17 billion. The fact that Salesforce was willing to go up another $10 billion in negotiations shows us how badly it wanted to get into the messaging and workplace productivity space.

The acquisition price represents more than 30 times Slack’s 2021 fiscal year sales. On metrics alone, is it too much? Yes.

But Salesforce is in a unique position to leverage Slack in ways that Slack couldn’t do by itself. Price aside, this is a great acquisition. It is the final piece of the puzzle that puts Salesforce in direct competition with Microsoft.

I loved Mulesoft. I badly wanted it to remain investable. But it was a great move by Salesforce.

And then Salesforce acquired Tableau last year. Tableau is a great business intelligence company that specializes in marketing analytics.

With those acquisitions and the new addition of Slack, Salesforce can compete directly with Microsoft’s customer relationship management (CRM) solutions as well as its Teams and SharePoint applications.

And I should point out that these offerings from Microsoft are poorly designed products. The only reason people use them is because Microsoft is a monopoly. It intentionally bundles its software offerings, and it often gives the software away as a strategy to block other software vendors from gaining a foothold.

Plus, as we discussed yesterday, Microsoft’s productivity solutions have become tools to track employees. That’s another reason to go with alternatives.

What’s more, Slack has already reduced the reliance on emails. Communications and file sharing happen seamlessly over Slack instead of through email channels. Team communication systems like this are already an alternative to traditional email systems like Microsoft Outlook.

Armed with these smart acquisitions, Salesforce is now a genuine threat to Microsoft’s monopoly. This is a great company with a very strong future ahead of it.

And that’s something we should all be happy about.

Let’s talk about yet another milestone in the private aerospace arena.

Relativity Space just raised $500 million in a Series D venture capital (VC) round. And this raise comes on the back of a $140 million Series C round last October. The company certainly wasn’t hurting for money.

What’s interesting here is that we are starting to see some late-stage money come in. Tiger Global Management, Fidelity, and Baillie Gifford each invested in Relativity’s Series D round.

We typically only see these investment firms come in when a private company is gearing up for an initial public offering (IPO). That’s an exciting prospect.

We haven’t talked about Relativity Space since last October. To bring newer readers up to speed, this is a private aerospace company backed by billionaire investor Mark Cuban.

And what’s unique about Relativity Space is that the company entirely 3D prints its rockets.

In fact, Relativity Space is building out what it calls the first autonomous rocket factory. The factory can build a rocket from scratch in just 60 days.

To be clear, that’s going from raw materials to a spaceflight-ready rocket in about two months. How impressive is that?

But I think an IPO will still be a few years in the future for Relativity Space.

The purpose of this funding round is to get the company to its first successful mission of Terran 1. It’s the company’s first rocket capable of sending 1,250 kg into low earth orbit.  It would make the most sense for Relativity Space to prove out its technology and launch capability prior to considering a public offering.

We talked about Rocket Lab’s latest milestone on Monday. As a reminder, Rocket Lab also makes its rockets using 3D printing technology. But it only 3D prints certain parts of the rocket – not the entire thing. That’s where Relativity Space is different.

Relativity Space is also differentiated in that it is targeting the market for mid-sized payload launches. For comparison, Rocket Lab focuses on small payloads, and SpaceX focuses on large payloads.

And what I love about Relativity Space is that it has a long-term vision. The company sees 3D printing as something that can go extraterrestrial. The technology can be used to support sustainable manned settlements on the Moon and Mars.

After all, it’s not easy or cheap to get payloads from Earth into space. But if we can mine raw materials in space, 3D printing will allow us to manufacture virtually anything we need.

Amazon’s newest announcement will change the game for AI…

This week, Amazon announced a custom machine learning chip called Trainium. As the name implies, this chip has been optimized to train artificial intelligence (AI) in the cloud.

And Amazon claims that Trainium will offer the most teraflops of any machine-learning instance available in the cloud. For context, one teraflop refers to a chip being able to process one trillion calculations per second.

We don’t know exactly how many teraflops Trainium will offer yet, but it will be much better than anything else out there. This is bleeding-edge technology.

And Trainium will be offered through Amazon Web Services (AWS). Of course, this is great for Amazon’s cloud business. But there’s a bigger implication here.

AWS made powerful computing services and storage affordable and accessible to everyone. Even the smallest companies can lease computing power through AWS and have access to technology that they could never afford on their own.

In just the same way, AWS will democratize access to machine learning.

In other words, superior AI training is no longer reserved for governments, universities, and large corporations. It is now accessible to everyone.

That dynamic, in turn, will accelerate the development of AI technology around the world. We will see so many unique and interesting AI-based applications come from this.

And that’s what is so exciting about this announcement. Trainium will be a catalyst for even faster technological development.

So I remain very bullish on Amazon and the work it is doing through AWS. To me, this is even more exciting than what Amazon is doing in the e-commerce space.

The technological implications of what Amazon is doing with AWS are far more important and impactful then the e-commerce side of its business.

P.S. Don’t forget to sign up for my upcoming special event. We are calling it The Cure, and it’s happening next Wednesday, December 9, at 8 p.m. ET.

During the event, I’ll reveal to viewers what I believe is the biggest biotech story in America right now. This isn’t a story you will see on the news, but it has the potential to alter the medical landscape forever.

And there’s a small, little-known biotech company at the heart of this story. Thanks to the Food and Drug Administration, I believe this company could see its share price rocket up to 1,000% higher when an upcoming milestone is met.

Simply put, these could be the fastest and largest gains in stock market history.