Stocks, particularly growth stocks, have been feeling the burn ever since the middle of November.

I’ve been talking a lot lately about how this market pressure was due to margin calls and how margin debt balances correlate highly to equity prices.

As stocks go up, margin goes up – and both have gone up tremendously since 1997. 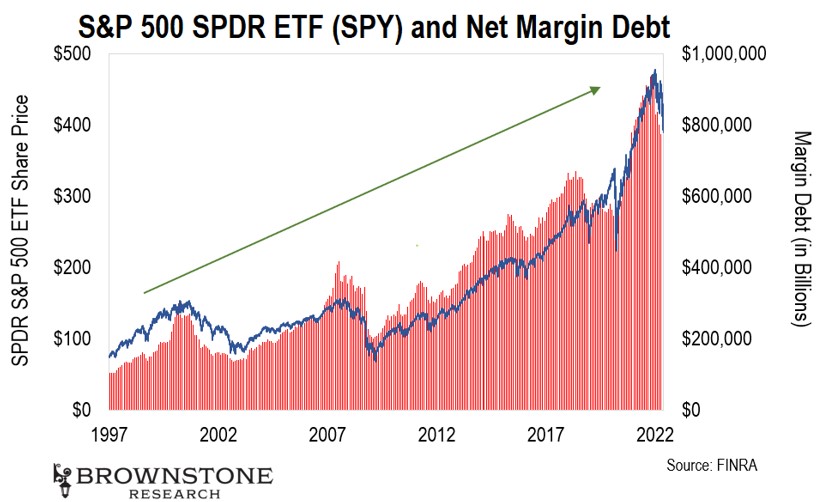 But as stocks come down, margin must come down quickly. I believe that’s why we saw such high selling in recent months.

Yet I’ve also been saying that come June, we would start seeing stories about hedge funds blowing up. I even saw a tweet from CNBC Investing Club Host Jim Cramer that’s right on target:

One fund he might be talking about is Tiger Global Management.

This storied hedge fund launched in 2001 and is managed by Chase Coleman III. He’s had a long history of offering superb returns.

According to Bloomberg, Tiger Global has offered an average annual return of 20% from inception through 2020. Needless to say, that performance is excellent.

And performance like that attracts assets. One recent report shows Tiger Global with $95 billion assets under management (AUM). That’s a lot of money.

And estimates put Tiger Global Management’s performance numbers at -52% year to date through May 2022.

You may wonder why I’m harping on one hedge fund’s suffering this year. And the answer is that it provides an example of how too much margin can go terribly wrong…

While I don’t have margin statistics for Tiger Global, we do know many stocks that the fund was invested in.

The table below shows Tiger Global’s top 50 holdings. Since November 19, when the Invesco QQQ Trust Series 1 (QQQ) peaked, the average return of those 50 stocks is an abysmal -48%, as of this writing.

No matter how you slice it, Tiger Global has dropped close to $20 billion dollars since this tech rout began.

These losses are monumental, to say the least.

Now it’s not a far stretch to imagine how, as these shares (and thus Tiger Global’s performance) came under pressure, the downward spiral was soon to follow.

If there was any leverage used at all on these positions, then margin calls would come sending stocks down even more due to the forced selling.

Given the powerful annual average performance of the Nasdaq, it seems almost certain that Tiger employed leverage. With rates at effectively zero, the use of margin debt would be hard to resist.

Again, you may think I’m picking on one hedge fund specifically. Yet in recent weeks, we also heard that Melvin Capital is shutting its doors. These two firms combined had a collective AUM of $100 billion or more.

And I believe we will read about more hedge fund blowups throughout the next few weeks.

Either way, hedge funds have been majorly suffering. And the suffering of any fund using any leverage has been amplified.

The silver lining in all of this is that I believe margin calls are likely behind us now. I agree with Jim Cramer’s assessment that margin calls had a big hand in May’s carnage.

The natural question is… Where does that leave us?

I think with margin calls behind us, forced selling has moved out of the system for now.

And there are indications creeping out that the economy is stabilizing.

There are indications that energy prices have peaked. Delta Air Lines (DAL) noted revenues are returning to pre-pandemic levels. Sony is ramping up production of its PS5 due to easing supply chain issues.

Employment numbers are strengthening overall, indicating there is much recovery that has taken place. According to data processor ADP, there are currently 1,000,000 more workers in the economy than there were in February 2020.

I believe that stocks will consolidate over the next few months, and volatility will gradually fall.

In Q4, we will see a nice lift in equities as investors realize they overestimated the Fed’s tightening.

So before you succumb to the negative news, just know we had one hell of a stock market storm recently.

And as novelist Paolo Coelho said, “The more violent the storm, the quicker it passes.”

P.S. As longtime followers know, I’m a Wall Street veteran. That’s where I gained much of my knowledge of the “inner workings” of the financial world.

Nomi Prins is another former insider who has been in the trenches, and I respect her experience a lot. I got to spend some time with her recently at the Legacy Summit in D.C. this past spring. We share many of the same views.

And lately, she has been talking about a major disconnect between the markets and the real economy that she calls “The Great Distortion.”

Now Nomi is predicting that the next chapter of The Great Distortion is set to begin in August. And she believes it could give investors the chance to make up to 10x in less than a month.

That’s why I’d like to encourage any of my readers who are interested to attend her June 15 summit and hear what she has to say. Readers can RSVP for free right here.