If all goes to plan, by the time we read The Bleeding Edge tomorrow (Wednesday), the U.S. and China will have signed the Phase 1 trade deal.

All the indications are positive that it will hamanuppen on schedule. Both teams are together in Washington, D.C., as I write this, and the U.S. Treasury Department dropped its designation of China as a currency manipulator yesterday.

U.S. Treasury Secretary Steven Mnuchin stated that “China has made enforceable commitments to refrain from competitive devaluation, while promoting transparency and accountability.”

The impact of the ongoing negotiations and tariffs between the two countries can be easily seen in the trade surplus numbers from Chinese customers. The U.S. trade deficit with China dropped by $27.5 billion in 2019 compared to a record deficit in 2018 of $323.3 billion.

With the consummation of the Phase 1 trade deal on Wednesday, we can hope for an improvement in trade relations and a healthy and productive beginning to the Phase 2 discussions between the two countries.

I’m excited to see the details of the final agreement. This will shed light on how much the terms will impact the high-tech sector in 2020 in a positive way.

More to follow on this topic on Thursday. Now for our insights…

Amazon just announced that its artificial intelligence (AI)-driven digital assistant, Alexa, will soon be able to pay for gas at ExxonMobil gas stations.

This is done either through the Alexa smartphone app or through a car with Alexa integrated into the entertainment and navigation console. The plan is to roll this feature out at more than 11,500 Exxon or Mobil stations this year. Here’s how it will work…

When we pull up to the gas pump, we can say, “Alexa, pay for gas.” Using our GPS location, Alexa will be able to identify the gas station and confirm the pump number we’d like to use. Then Alexa will activate the pump for us. From there, we can simply fill up and drive off. Alexa will route the payment through our Amazon account.

There will be no more swiping credit cards and punching keypads. And we’ll never have to worry about the dreaded “please see cashier” message when the card reader fails.

And this isn’t designed for a niche group of cars. There are 21 auto manufacturers who offer vehicles with Amazon’s Alexa built-in. That list includes the likes of Chevrolet, Ford, and Toyota. And pretty much everyone who has a car in the U.S. also has a smartphone capable of running the Alexa application.

And as Nick Rokke – one of my research analysts – uncovered at this year’s Consumer Electronics Show, even Lamborghini is integrating Alexa into its vehicles (keep an eye out for more on CES in future editions of The Bleeding Edge). 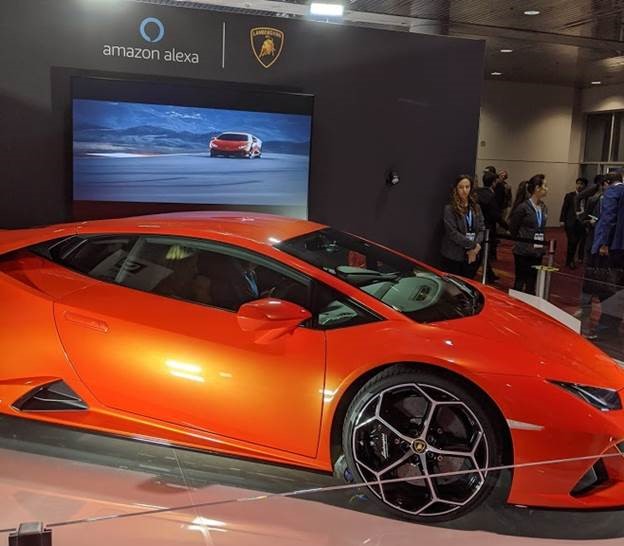 This is a great example of how digital assistants can provide practical services for us outside of our homes. We can expect to see more and more services provided as time goes on.

Amazon is providing Alexa for free in order to route more transaction volume through its platform – specifically, transactions that are not related to its own e-commerce platform. Through partnerships, like this one with ExxonMobil, Amazon is entitled to a small cut of each payment processed through Alexa. And Alexa (and thus Amazon) becomes an even more integral and convenient part of our lives. Amazon is truly a marketplace for just about every necessity we need day to day.

So this is another revenue stream for the company. We can expect to see more Alexa-based payments coming in the near future. I continue to be bullish on Amazon’s future.

AI is now an expert at diagnosing brain tumors…

New research out of New York University just revealed an AI that is better than the best neuropathologists at diagnosing brain tumors. Here’s the story…

Using a form of AI called deep neural networks, a neuroscientist trained an AI on 2.5 million images of brain tissue samples. This is how the AI learned to identify brain tumors in humans.

Neural surgeons take brain tissue samples from patients while they are under anesthesia in the operating room. This is called a brain biopsy.

These surgeons need to receive a diagnosis while the patient is still being operated on. The results of the brain tissue diagnosis determine the neurosurgeon’s next steps.

Obviously, if an AI can reduce that time to 2.5 minutes, it will reduce the cost of the surgery dramatically. There are about 1.1 million brain biopsies performed each year in the U.S. alone. That equates to an enormous amount of cost savings to be had.

And from a patient perspective, this will dramatically improve care. After all, if you were the patient on the operating table, would you want an answer in 2.5 minutes? Or 30 minutes?

So this is another great example of how AI can supplement humans and deliver even better results at a dramatically reduced cost.

Plus, there is a vast shortage of neuropathologists right now in the U.S. In fact, the numbers show a 42% vacancy in neuropathology fellowships. It’s very likely your local hospital doesn’t have this expert on staff. It’s a big pain point. And the numbers are even worse in developing countries.

But thanks to this AI, even understaffed hospitals can move forward with brain biopsies and still get world-class diagnoses.

No matter where we live, we will soon have a world-class “expert” at our hospital of choice. And we will have artificial intelligence to thank.

SpaceX continues to build out Starlink…

More big news from Elon Musk’s SpaceX… The company just launched another 60 satellites for its Starlink program. As we have discussed before, Starlink is the name of SpaceX’s global satellite network. The stated goal is to provide internet access to anywhere on the planet.

This is big news…

With this launch, SpaceX now has 182 satellites in orbit. That makes Starlink the world’s largest satellite constellation. It also makes SpaceX the largest operator of satellites on the planet. And it was built in a short period of time. That’s a testament to SpaceX’s ability to launch payloads into space using its Falcon 9 rockets.

Now, here’s what the mainstream press won’t report about the Starlink program…

I believe the stated goal to provide global internet access via Starlink is just a front. That’s because satellite internet is just too slow and capacity constrained. And latency can be half a second or more.

That may not sound like much, but it results in significant delays. Consumers will never get 100 megabits per second to the home through a satellite service. And as we have seen with all satellite internet operators in the past, there are always monthly caps on how much data can be downloaded each month… And those caps tend to be small… It is easy to max out in a day or two from normal usage. That means that consumers would be able to watch a day or two of Netflix, and then they would be throttled down to speeds incapable of video streaming for the rest of the month.

This will provide corporations, nonprofits, and governments with 24-7 access to any data collected on satellites, any day of the year. We can think of it as the equivalent of a space-based fiber-optic network, similar to the internet backbone that has been built to cover Earth.

So I am excited to see the progress SpaceX is making. And here’s where it gets interesting…

Pair this progress with the scale and momentum SpaceX has right now, and we’ve got the perfect conditions for an IPO. CEO Elon Musk is on fire right now with the incredible progress at Tesla (short sellers in Tesla have lost an absolute fortune). With the growing pains of Tesla taking a back seat, the timing feels great for SpaceX. It is one of my top picks for a major IPO in 2020.

P.S. SpaceX isn’t the only company I predict will go public in 2020. In fact, I predict this year will bring a record number of IPOs. I believe we’ll surpass the previous record set in 2001. The tech investing landscape is about to get even more exciting.

And there’s one group of recently public companies that investors need to pay attention to.

This small group of stocks has a “timer” attached to their share prices. And once that timer hits zero, the share price can rocket hundreds of percent in days or even hours.

Too incredible to believe? I’ll give you all the details during a special event on January 22 at 8 p.m. ET. Go right here.