Before we get to our insights, I’d like to share an interesting consequence of today’s abnormal market conditions. It doesn’t have anything to do with the technology sector, but anybody looking to buy a new home might find it useful.

We might think now is the perfect time to buy a home or refinance an existing mortgage. After all, 10-year Treasury yields have dropped below 1% for the first time ever. Last month, 30-year mortgages hit their lowest level in history.

But this isn’t a normal market…

Investors who normally provide the capital to mortgage lenders have nearly stopped investing. With more than 40 million jobless claims in the U.S. – unemployment levels not seen since the Great Depression – investing in mortgages is seen as far too risky right now.

And we can see the nervousness in the markets when we look at the difference between the 30-year fixed mortgage rates and the 10-year Treasury yield. 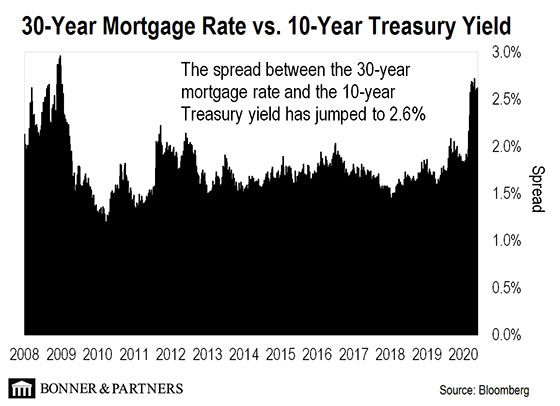 That’s still a great rate for a 30-year fixed mortgage, but the reality is that very few can take advantage of these rates. Lenders are only lending to borrowers who represent the lowest-risk, highest-quality applications.

Many lenders are now requiring 20% down payments. Some have stopped issuing home equity lines of credit. And we can forget about cash-out refinancing loans.

There will be an incredible opportunity to get a new mortgage or refinance an existing mortgage in the coming months. We should wait for the volatility in the market to return to normal levels.

We should also keep our eye on that spread between the 30-year mortgage and the 10-year Treasury. Once that drops down closer to 1.7 percentage points, consumers are going to have the opportunity of a lifetime to lock in 30-year mortgage rates below 3%.

That’s not an opportunity to miss.

Amazon’s DLT has nothing to do with digital assets or cryptocurrencies, however. Instead, it is designed to solve one of Amazon’s most pressing problems: identifying the provenance of products sold on its e-commerce platform.

In other words, it wants to be able to track where everything comes from and remove counterfeit and low-quality products from its platform.

In 2019, The Wall Street Journal published an exposé. It revealed that thousands of unsafe or counterfeit goods were for sale on Amazon.com. That included illegally imported prescriptions, unsafe electronics, and even children’s toys with an unsafe level of lead in them.

Amazon just doesn’t have a good way to police this right now. That’s where this new DLT patent comes in.

The patent outlines a system that would allow Amazon to track the entire supply chain for each product, from raw materials to production to distribution. This would be accomplished by requiring all parties in the supply chain to document and authenticate their activity.

This way, every step in the supply chain would be time-stamped. There would be a permanent and verifiable record of where every product comes from.

This DLT system would create a network of trust. It’s a highly secure network of information… essentially, a digital ledger that records all transactions that occur on its network.

All participants in Amazon’s economic network would contribute to it. It would be a single source of truth for where products are coming from. And that would be immensely valuable for both Amazon and its customers. Here’s a rough view of how it would look like for us consumers. 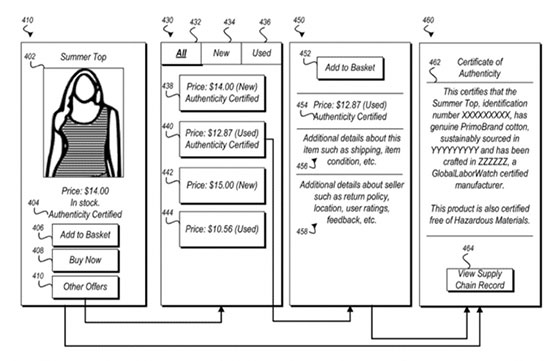 Consumers could see that the product is authentic (not a counterfeit), and we would have the opportunity to view the supply chain record to understand where it came from.

To me, a system to track supply chains and prove authenticity and provenance is one of the best applications of blockchain technology. One of my favorite early stage technology companies working in this space is Toronto-based Authenticiti.

So why haven’t we seen this kind of application widely used yet? The reason is that it requires the cooperation of so many different parties.

For example, a small retailer simply doesn’t have the leverage to force its suppliers to adopt a system like this. It takes some muscle to make it happen.

A company like Amazon could make it happen. It is such a dominant force in e-commerce that third parties would have too much to lose by not participating.

So I’m very excited to watch this story play out. If successful, other companies will be quick to launch their own DLT systems for supply chain tracking. And that benefits all of us.

Look at this incredible chart from the U.S. Energy Information Administration (EIA): 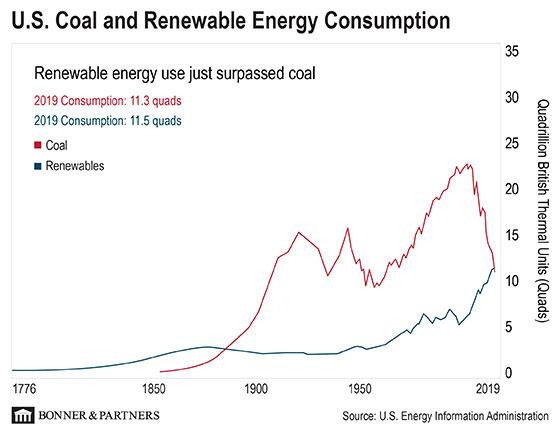 In fact, renewable energy use just surpassed coal. How exciting is that?

But ever since the dawn of the 20th century, American coal consumption has far outpaced renewables. And that has some important implications…

For starters, coal, natural gas, and power from nuclear fission fuel most electric vehicles (EVs) today. Thus EVs are only “clean” vehicles if the electricity comes from clean, radioactive-free sources of energy.

But the good news is that the world is moving away from coal. Renewable energy technology has progressed to the point where it’s economical for mass power consumption. A great example is the Gemini Solar Project in Nevada, which we talked about back in May.

Also, renewable energy is becoming an attractive option for homeowners as well. The days of eyesore solar panels nailed awkwardly to our roofs are almost over. Solar panels like Tesla’s solar glass are a brilliant concept. A normal-looking roof can have solar cells built right into it.

I’m actually designing a new home that will be powered entirely by solar energy and geothermal wells. And I’ll be using Tesla’s solar tiles for my roof.

Bottom line: Renewable energy adoption will only pick up from here. Coal is on its way out for good. And incredible advancements are being made right now in nuclear fusion technology – replicating the power of the Sun – which will deliver limitless clean energy at costs lower than anything the world has ever seen.

Snap has a shot at transforming its business…

For readers who may not know, Snapchat is one of the most popular social media platforms among millennials (people born in 1981–1996) and Gen Z (those born in or after 1997).

And the company raised eyebrows back in 2017 when it took a big investment from Chinese tech giant Tencent. We don’t often see U.S. tech companies looking to China for investment.

Well, now we know what Snap has been up to.

The company just announced that it is rolling out a platform that will allow third-party developers to build mobile apps within Snapchat. This is a play right out of WeChat’s playbook.

WeChat is the most popular social media platform in China. And WeChat is far more prolific in terms of capabilities than any social media company here in the U.S.

Basically, WeChat made a portal for users to do the things that they do in their daily lives. And it has been remarkably successful. In fact, WeChat did $113 billion in commerce on its platform last year.

So Snap is just mimicking what WeChat did to become so incredibly “sticky” in China. It is inviting developers to make apps that run on Snapchat.

And guess what? Tencent owns WeChat. Now it all makes sense…

This is a major strategic shift for Snap, and it could transform the company if it is successful.

But Snap is going to have fierce competition. We talked about Facebook’s new “Shops” e-commerce platform last week. American social media companies know there’s a ton of money to be made if they can drive more economic activity on their platforms.

I am excited to watch this development play out. It’s a bold move by Snap, with the obvious backing from its investor (Tencent), and it could pay massive dividends if it can pull it off.