More than 30 airlines have completely suspended service to and from China. Not just to Wuhan, the center of the COVID-19 outbreak, but to the entire country.

There have been more than 25,000 airline seat cancellations and more than $650 million in lost revenue to airlines.

Regional airlines in Asia that rely heavily on travel to and from China are in trouble. Especially those that are highly leveraged and rely on leases for aircraft. Several will certainly go bankrupt.

And for Chinese travelers wanting to travel outside of the country, it is really tough right now. Since January, 78 countries have issued controls on Chinese visitors. Quarantines and even outright bans have been issued. These are the extreme levels that countries are going to in order to contain the outbreak of COVID-19.

I can’t imagine that feeling of isolation or not being able to go about business normally.

I’ve lost count of how many colleagues I have spoken with who have canceled travel plans – not only trips to China but any trips to Asia.

One colleague told me that many companies in Singapore are checking the temperatures of all employees each morning when they enter the building.

The economic toll would simply be too great if another country experienced the same kind of exponential growth in the virus.

Confirmed cases, if accurate, definitely appear to be leveling off in the last few days, with the death toll climbing slowly higher to more than 2,000 now. If this continues to drastically slow down and factories get back to work in full swing within the next week, we might just be able to avoid a major market downturn.

Apple released pretty bad news on Monday with reduced sales expectations due to the impact of COVID-19, and the stock dropped by almost 3% on the news. But at the time of this writing, it has already almost climbed back to where it was trading before the announcement. The markets have been remarkably resilient, and the Nasdaq is even putting in all-time highs today.

I’ll keep monitoring the situation. But for now, let’s turn to our insights…

As a reminder, Starlink is SpaceX’s satellite constellation. The stated goal is to create a satellite network around the Earth that can provide communications access to anywhere on the planet. And Starlink’s goal is to blanket the Earth with at least 12,000 satellites… maybe as many as 42,000.

Of course, as I have said before, I believe the real goal is to create a backhaul network for space. It will allow satellites to communicate with base stations on Earth 24 hours a day. In other words, all space-to-Earth communications would flow through the Starlink constellation of satellites.

But what’s most impressive here is that SpaceX completed this launch with the same rocket it used in a launch on December 16. That means it recovered the rocket, cleaned it up, and got it ready for this launch in just 63 days. That’s the company’s fastest turnaround ever.

And SpaceX thinks it can do even better. Its goal is to get this turnaround time down to about 30 days. That way it can do two launches each month.

That’s SpaceX’s great competitive advantage. Its strategy to reuse rockets from previous launches is working well. And that reduces the cost of getting satellites into space by up to 80%.

And reusable rockets aren’t SpaceX’s only efficiency. Look at this image: 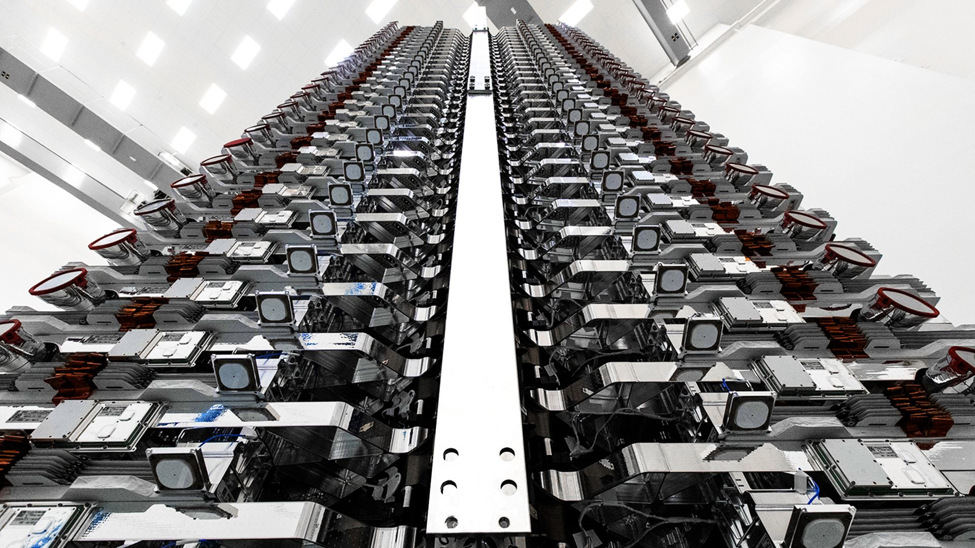 This is what the satellites look like ready for launch. There are 60 of them stacked neatly on top of each other on each side of a “spine.” They almost look like robots prepared to go into battle.

When the rocket gets to the designated altitude, the cone opens, and each satellite is deployed to its appropriate position. The efficiency of this system is just incredible to see.

We can expect to see SpaceX increase the pace of launches from here. And there’s a strategic reason for that…

As we talked about last week, SpaceX plans to spin off Starlink into an independent company and take it public.

In preparation, SpaceX wants to generate as much excitement with these launches as possible. And it wants to demonstrate to the market that it can reliably launch these satellites on a regular basis. The goal this year is to have two launches per month. That’s 120 new satellites being deployed monthly to the Starlink constellation.

The more excitement, the more interest there will be when the IPO rolls around. And the more reliable these launches, the more comfortable large investors will be with investing billions of dollars into Starlink when the IPO comes around.

Starlink may very well become a real “Skynet,” controlling the flow of all extraterrestrial data and information… though hopefully not as ominous as in the Terminator movie.

Next, we have big news in the world of nation-state hacking…

Last Friday, the Pentagon, the FBI, and the Department of Homeland Security (DHS) exposed a hacking organization called Hidden Cobra. How’s that for a name?

The North Korean government backs it. These U.S. authorities posted a repository of file names and cryptographic hashes that identify Hidden Cobra’s malware and hacking activities. The group is known for phishing for access to sensitive information and hacking financial accounts.

Usually, governments tend to keep these issues low profile. But for some reason, the U.S. government agencies decided to make this very public. They are drawing a line in the sand.

This is a public statement that U.S. agencies are serious about addressing nation-state-funded cybersecurity threats. The most egregious are North Korea, China, and Russia.

I suspect the timing of this is not a coincidence…

So we can expect cybersecurity to be a hot topic this year. Of course, I’ll keep my eye out for the investment opportunities that arise as a result.

We just talked about SpaceX. SpaceX’s launch capabilities are so cost effective because it designs its reusable rockets with fewer parts. Well, Amazon has an entirely different idea for how to reduce the cost of satellite launches…

Amazon’s latest patent reveals a whip-based system for launching satellites into space. The system consists of a wire, potentially hundreds of miles long, with one end attached to a ship at sea.

At the other end of the wire, a drone holds a satellite (or payload) in the air. And in between, drones hold the wire at increasing elevations. Here’s the graphic: 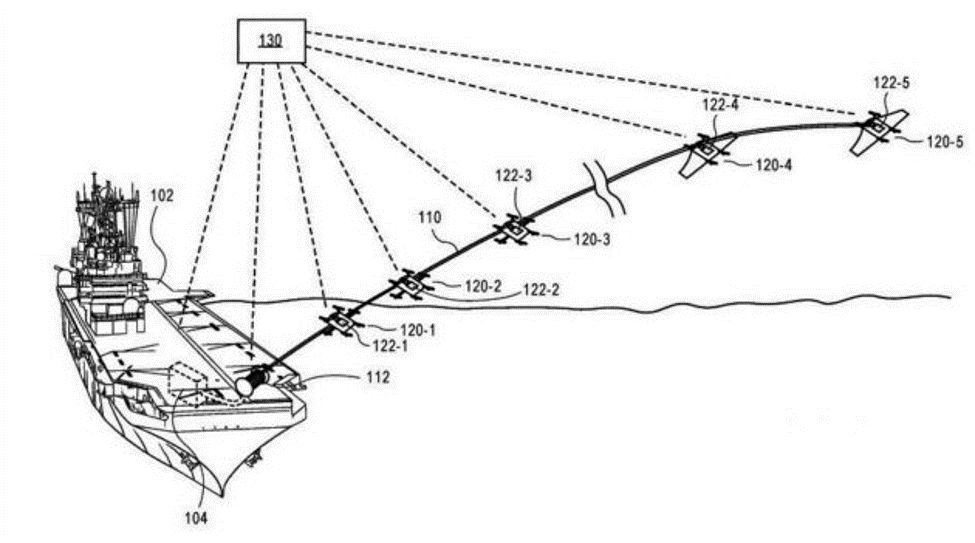 The drones in the middle oscillate in sync with one another. This causes the tail end of the wire to move back and forth. Once the whip is moving fast enough, there is a final, forceful snap that sends the end of the whip moving at supersonic speeds. At the perfect moment, the last drone releases the satellite, hurling it into space.

This is absolutely one of the wildest ideas I’ve ever seen. But you know what? This system is conceivable.

The biggest obstacle to launching satellites is cost. And the reason costs are so high is because launches require a tremendous amount of energy to overcome gravity.

With this system, the primary energy needed is to power the drones. And drones don’t consume that much energy. So this is potentially a highly energy-efficient system.

I should point out that Amazon’s patent is quite impressive, and the level of detail is notable. This isn’t a pie-in-the-sky idea… It’s well thought out. And Amazon has billions of dollars it can use to make a whip launcher a reality.

Who knows if Amazon does anything with it? But given the company’s track record, I wouldn’t ever discount the potential for a unique approach to logistics.

And who knows? Maybe this whip could also be used to launch packages across the ocean…

Why not just fling a drone from the East Coast of the U.S. headed for the U.K.? It wouldn’t be the first time Amazon revolutionized logistics.

Readers of my large-cap investing service, The Near Future Report, are already up 20% in just four months with Amazon. I continue to be bullish on the company’s future.

P.S. On Friday, I mentioned a special trading event that I thought readers might be interested in. It’s hosted by Andy Krieger, the trader best known for “breaking the kiwi” and making $300 million in the process.

Andy has been keeping a low profile for the last few years. But on Thursday, February 20, at 8 p.m. ET, he’s unveiling a “black swan” event coming later this year. And he’ll outline the trade he’s prepared to make when it happens. If that sounds interesting, readers can get the details here.