Van’s Note: Here at The Bleeding Edge, we follow the biggest trends of tech. But this week, we’re also sharing insights from legendary trader Andy Krieger and his apprentice, Imre Gams.

Andy has been successfully trading for decades, mostly out of the spotlight after leaving George Soros’ Quantum Fund. He’s been notoriously private, anonymously making market-shifting multimillion-dollar trades over the past 35 years.

And now his apprentice, Imre, brings readers a look at how to use technical analysis with Andy’s expertise. Anyone interested in learning how to trade like a legend should be sure not to miss this…

I’ll be the first to admit, I am not a cryptocurrency expert.

I know the basic fundamentals, sure… But I’m not one of the early adopters of the technology. I don’t know the ins and outs of blockchain protocols. And I’m not out there looking to speculate on penny-cryptos or initial coin offerings (ICOs).

I have a brother-in-law who happens to work for a venture capitalist firm that exclusively deals with blockchain and cryptocurrency-based projects.

Naturally, he has an investment portfolio full of different cryptocurrencies. And yet, despite my relative inexperience in the crypto world… every day, without fail, I’m the one person he turns to for insights on the crypto markets.

Why? Because I’m a trader first and foremost. And traders know how to analyze markets.

When Andy taught me his trading principles and methodologies, he showed me how they would work in any market.

And they certainly do… They work on currencies, stocks, futures, and yes… even crypto.

The reason why is, in every market in the world, human beings ultimately determine the price action – no matter what asset you’re looking at.

Sure, there are plenty of automatic trading systems out there, but don’t forget they were programmed by people… And since the behavior of human beings happens to be regularly predictable over time, bitcoin and other cryptocurrencies can be traded just as effectively as everything else.

Like most markets, cryptos are driven by two emotions: fear and greed. These emotions tend to dominate the behavior of investors and traders around the world, and this behavior ultimately gets reflected in asset prices and chart patterns.

No, the charts are not perfect predictors of future price movement. And they certainly don’t cause prices to change. But there are certain patterns that are often quite useful in figuring out which emotions are dominating the action… and how these feelings will play out in the market.

Technical analysis is what we use to spot and trade on these patterns. And it is the underlying predictability of human beings that makes technical analysis a powerful weapon in the right hands.

Just take a look at the chart below… 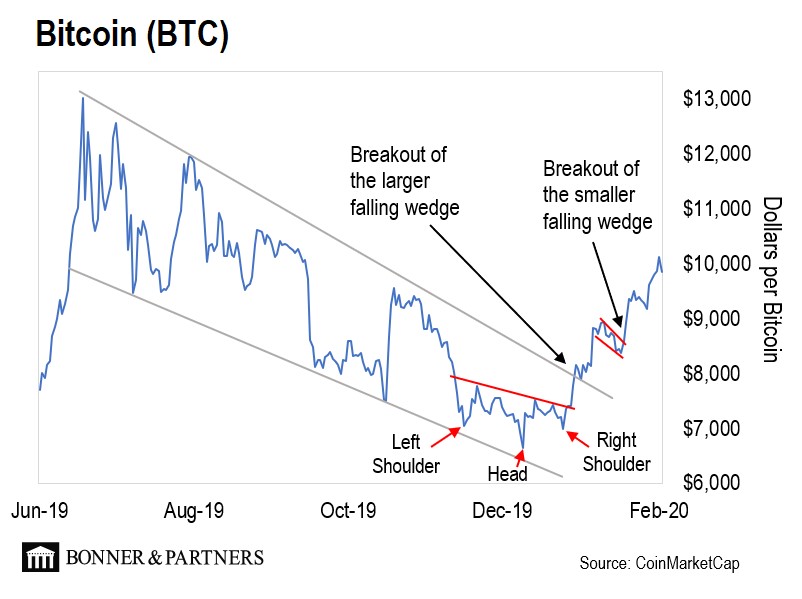 I began tracking bitcoin on January 12, with a strong bias for bullish momentum.

The Bitcoin chart exhibited certain telltale signs that a strong surge of buying was about to enter the market. It had just broken out of a long-term downtrend channel and was looking to build on that momentum.

This downtrend channel, as seen in the image above, lasted for the better part of 2019.

If you’d gotten into position with bitcoin when it first broke out of the downtrend channel, you’d be sitting on an 18% profit today. That handily beats the broad stock market’s performance in the same time frame.

That’s what technical analysis is all about. And we look forward to sharing many more examples – and profit opportunities – with you in the future.

To a profitable trading week,

The pattern is something we call “compression.” It’s when the highs and lows of an asset start to trade closer together.

As these patterns continue to compress, at a certain point – projected by Andy to be mid-2020 – the result will be a major “black swan” event… the kind that could make millionaires… or take unprepared traders for everything they have.

Andy’s putting together an urgent briefing on the event, where he’ll show you exactly how to prepare. It airs on February 20, 2020.

If you want to take advantage to the event Andy sees coming, sign up for this crucial event right now.