Twenty years ago, the world was in the process of launching 3G wireless networks. It was a big deal back then because the previous generation, 2G, wasn’t good for anything but voice calls.

In addition to voice, 3G technology enabled data to be transferred over wireless networks. That meant the world could suddenly send and receive emails and photos, stream video, and even perform some level of web browsing – all from the palm of our hand.

It was our first taste of what mobile computing looked like… And now it’s coming to an end.

With every new generation of wireless technology that gets “turned on,” at least one older generation gets “turned off.” Why? The answer is simple, but not for the reason that we might think.

The natural thought that comes to mind is that “no one is using 3G anymore.” Surprisingly, that’s not the case…

On AT&T’s 3G network in the U.S., about 2.7 million people are still using 3G phones. They just never felt the need to upgrade. 3G was enough for their needs.

Wireless operators are anxious to shut off the older networks so that they can be repurposed for technology like 5G, which requires a radically different level of data throughput and performance.

For perspective, 3G enabled wireless speeds up to 2 Megabits per second (Mbps). At those speeds, even downloading an email with a large attachment would be problematic.

1,000X more data flying around a wireless network means more network congestion, and the only way to support the insatiable thirst for more data is more radio frequency (RF) spectrum for the network.

This brings us back to 3G.

This is easier to do in geographic areas where there is little to no utilization… But where there is a concentration of existing usage, it can be problematic. No matter how much notice is given, there are secondary effects for all sorts of systems.

For example, many cars still use 3G modems from the time that they were manufactured. Most of us don’t realize this, but most of our cars have a cell phone embedded inside the car. We never see it, but it’s there for navigation, connectivity, and emergency calls.

Most new cars are built with 4G modems now, but some manufacturers still used 3G as recently as last year.

Many old school buses use 3G for the same reasons. Old alarm systems often use 3G as well. Manufacturers are known for using the technology because it is cheap to employ, and they really don’t need high performance.

Something like an alarm system, medical device, or sensor on a piece of industrial equipment really doesn’t need the performance of something like 4G or 5G.

But there comes a time when the wireless operators simply don’t have a choice… And that time is now. The increase in data traffic over 5G networks right now is growing exponentially.

The wireless operators know that they will need more bandwidth, and that means they’ll need more spectrum.

In the U.S., here’s what 3G’s shutdown looks like:

And that will be a wrap for 3G in the U.S. The same is happening around the world.

My advice to anyone still using a 3G device is to upgrade now. The shutdown is unavoidable, so it’s best to get ahead of it rather than risk suddenly losing connectivity one day.

While those dates above are the final sunset dates, the reality is that the 3G network is being shut down tower by tower. In most cases, it’s happening earlier than those dates above, depending on where you are.

4G will be around for the rest of the decade, so that’s a safe bet in terms of upgrading. But you probably won’t be surprised that I recommend taking the leap to 5G. It’s just getting started.

2022 is the year when we’ll begin to see the kinds of applications and performance enabled by 5G.

And when it comes to wireless technology, 5G is just as revolutionary as the shift to 3G from 2G two decades ago. It’s the future, it’s inevitable… So we might as well enjoy it.

Exciting news just leaked out from some suppliers in Taiwan.

Apple just completed the phase 2 engineering testing of its upcoming augmented reality/virtual reality (AR/VR) headset. And that means Apple is on track to launch the product at its annual fall conference in September.

For context, Apple typically goes through three testing phases before moving to mass production in preparation for a product launch.

We can think of phase 1 as a prototype testing phase. Phase 2 is used for pre-product validation, and phase 3 marks the final test for the product that will be mass-produced.

With phase 2 complete, we can expect phase 3 to happen over the next few months. This is a clear indication that Apple will be ready for mass production in the August timeframe… and it’s the first concrete evidence we have seen that Apple is on track for a 2022 launch.

Here’s a look at an early mockup of Apple’s headset: 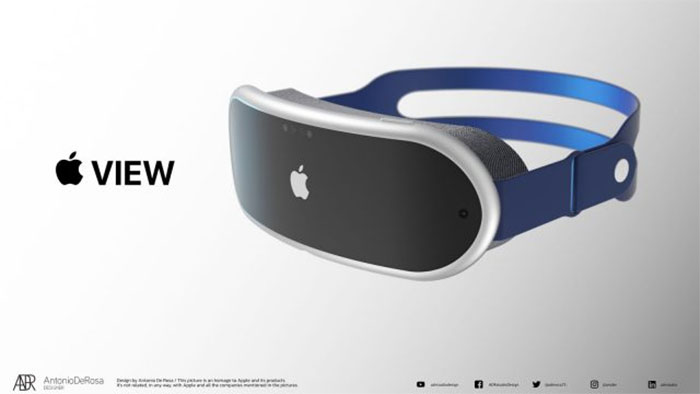 I fully expect that the final product design will be different from this one. But I expect that Apple will keep with its typical minimalistic design principles with a sleek form factor.

And it’s important to note that this is more than just a hardware release.

We know that Apple has been working on its own AR software (operating system) for years now. In fact, Apple released development kits for third-party developers to begin working on their own AR applications within Apple’s AR ecosystem last year.

Apple’s strategy will be similar to the iPhone. It will be designed with an AR operating system (AROS) that will enable software developers to develop applications for Apple’s AR/VR headsets.

So we can be certain that Apple will launch its AR/VR headset with a full suite of apps. This includes Apple’s own apps, as well as those made by independent software partners.

That said, I expect the first-generation product will be a bit pricey. It will appeal to high-end consumers and enterprise applications, but the price point won’t be at a level for mass adoption.

We should expect the arrival of a less expensive headset next year following this year’s AR launch. The first version will be used to seed the market for application development, experimentation, usage data collection, and improvement of the overall design for next year.

That’s when we will see adoption take off. And here’s why I’m so excited about this…

Whenever Apple releases a new product category, it sets the standard for the entire industry.

Take the Apple Watch, for example. It became the best-selling watch in history. And it prompted competitors to step up their game in an effort to compete.

In this way, Apple’s product launches seed the industry. I expect we’ll see an explosion of AR/VR developments in response to Apple’s launch this fall.

That’s why I’m helping my readers position themselves for the arrival of this kind of augmented reality technology now. To learn more about my top recommendations, go right here for more details.

Robotics is coming to the biotech industry…

Another early stage funding round caught my eye last month.

Automata, a robotics company I have been tracking closely, just raised $50 million in its Series B venture capital (VC) round.

This investment will fuel the rollout of robotics in the biotechnology industry.

We have talked about the convergence of artificial intelligence (AI) and biotech quite a bit in The Bleeding Edge.

Companies have been applying AI to drug discovery for a few years now, but that’s all on the software side. (You can see my top convergence investment pick right here.)

What’s exciting about Automata is that it’s developing robots to replace the tedious labor that laboratory technicians currently do. It’s very arduous and time-consuming to fill, test, and analyze thousands of pipets over and over again, or move samples from one testing station to the next in the lab.

Somewhat ironically, this kind of station-based, task-oriented work is similar to the work robots are doing in fast-food restaurants and logistics warehouses.

The fact is, there aren’t enough human workers to perform these jobs. The Great Resignation and ongoing labor shortages, combined with an explosion of investment and therapeutic development in the biotech industry, have created huge bottlenecks in terms of drug discovery.

Automata’s tech seeks to solve the problem. It removes the need for lab techs to manage everything within the lab setting.

Here’s a look at Automata’s robotic arm in action. We can see that the robot can handle small and potentially fragile items: 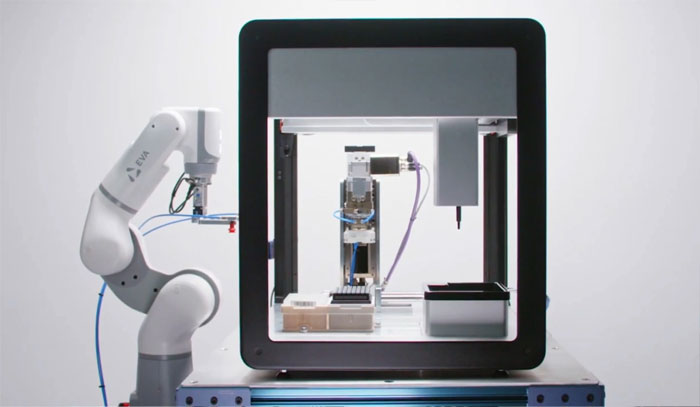 And here’s the key point – Automata’s robots can run 24/7 with no need for a break. The adoption of robotics, like AI, will dramatically accelerate drug development, diagnostics, and preclinical testing.

This, in turn, will help biotech companies navigate the U.S. Food and Drug Administration’s (FDA) regulatory process faster. And that will speed up how quickly new therapies get to market. Everybody wins.

I should also point out that Automata has already demonstrated that its tech works, as its robots processed over a million samples for the National Health Service (NHS) in the U.K. Imagine how many humans it would take to manually work with a million samples.

Oh, and In-Q-Tel, the VC arm of the U.S. Central Intelligence Agency (CIA), happens to back Automata. There is obviously a vested interest in accelerating drug discovery, diagnostic testing, and even molecular sampling for an organization like the CIA.

AI, combined with this kind of robotics technology and empowered by massive databases of genetic and biological information, is the convergence that is setting the biotech industry up for its greatest bull market ever. And that’s something I am predicting will kick off this year.

The terms state that ONK Therapeutics has the right to use Intellia’s technology for up to five natural killer (NK) cell therapies. In addition, Intellia retains the rights to develop and commercialize two cell therapies in the U.S.

This is a surprising deal on two fronts.

First, ONK Therapeutics is an early stage company. It’s smaller than Intellia. Yet it’s the one promising nearly $1 billion in milestone payments.

Usually, the dynamic is reversed. These kinds of deals typically happen when a company like Intellia partners with a much larger biotech or pharmaceutical company.

This ruling invalidated the patent rights claimed by the University of California (U.C.) Berkeley, under which Intellia Therapeutics was operating.

This begs the question – does the USPTO’s ruling put this deal in jeopardy? No, probably not.

But it does mean that Intellia will need to license the foundational CRISPR genetic editing technology from Editas Medicine. In fact, any company that wants to develop CRISPR therapies will need to go through Editas to do so.

So this will be interesting to watch in the coming months. We should see a flurry of licensing deals inked as companies scramble to secure access to related intellectual property (IP).

And bringing CRISPR into the fold could lead to some major breakthroughs.

This combination could very well lead to the cure for a wide variety of cancers. We’ll certainly want to keep this collaboration on our radar.