Be wary of the next blockbuster IPO…

Workplace productivity company Slack Technologies is set to go public next month. We expect shares to price around June 20.

But Slack isn’t doing a traditional initial public offering (IPO) like Uber and Lyft. Slack is doing a direct listing… like Spotify did last year.

Traditional IPOs flow through investment banks. The banks shop the IPO to large institutional investors to determine market demand for shares… This process helps to determine the share price at the IPO. Then they collect roughly 7% of the total sale for their work.

Depending on the size of the IPO, that can be an obscene amount of money. It is very lucrative for the investment banks… but very costly for the company going public.

Remember, private companies have stock shares also. They are owned by the company’s founders, employees, and investors.

A direct listing lists those shares on a public exchange. Just like a normal stock market, those stakeholders who have shares can hold or sell them.

And, of course, there will be buyers of the stock on the exchange. The point is, the market will determine the share price, not the investment banks.

This cuts out the banks… the fees… and the lockup periods for early investors.

By doing a direct listing, Slack is signaling to the market that it doesn’t need to raise additional money. That’s not the purpose of the IPO. It just wants to provide liquidity to its investors and employees.

Direct listings are rare because companies usually conduct an IPO to raise capital. But a flood of private capital has flowed into private tech companies over the last 10 years. From $27 billion in 2009, total venture capital investment hit nearly $131 billion last year. 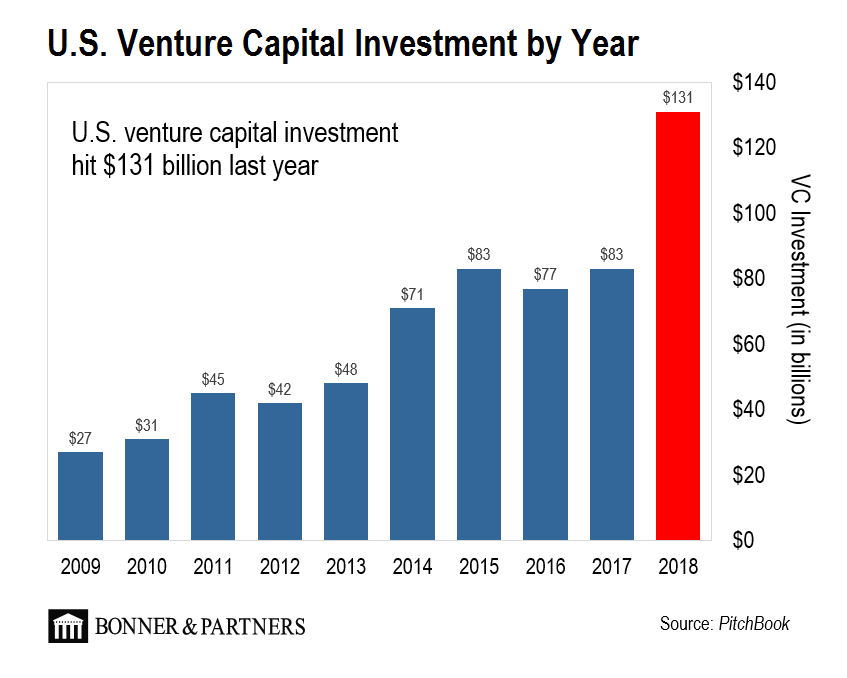 This flood of capital has distorted the public markets. Technology companies have been choosing to stay private much longer than ever before.

In fact, Slack had 10 discreet rounds of venture capital funding. It’s now valued at $16.7 billion… up from roughly $5 million when the company was founded in 2009.

That’s incredible growth for a private company. It used to be that you had two or three venture rounds and then went public at a much earlier stage.

But I need to share a secret with you about Slack…

It is a fantastic company. In fact, it is one of the best software-as-a-service (SaaS) companies ever. But its valuation is astronomical.

Right now, Slack has an enterprise value-to-sales (EV/sales) ratio of 40. That’s off the map.

For comparison, one of my favorite software companies familiar to both Near Future Report and Exponential Tech Investor readers, Twilio (TWLO), is trading at an EV/sales ratio of 22. That’s high, even for a strong economic market that we see now.

I wouldn’t ever recommend a company trading at those lofty valuations, let alone something trading at twice that.

Context and valuation are extremely important in investing. Assuming that Slack lists its shares around a 40 EV/sales ratio, its stock is going to collapse by at least 50%.

In a case like this, it is smart to let the hype die out, wait for the shock of disappointment and the stock to fall, and look for a window to buy in when the market negativity is bottoming out.

The end of all disease…

The FDA just approved health care giant Novartis’ gene therapy for spinal muscular atrophy (SMA). SMA is a rare disease that consists of loss of muscle control and, eventually, muscular degeneration and often death. But the therapy will cure infants who are born with this genetic disease.

That makes this the most expensive drug in the world.

This speaks to how gene therapies will be priced. I have covered the genetic editing space since 2015… And one of the most common questions I get is whether these companies will be able to survive and grow.

After all, if genetic editing therapies can cure genetic-borne diseases, won’t these companies have fewer and fewer patients to sell therapy to over time? How can a company survive without repeat customers?

The incredible thing about a genetic editing-based therapy is that it is often a one-time treatment. One and done.

Well, part of the answer is the price. Treatments will cost far more than traditional therapeutics.

These treatments are highly personalized medicine. They’re not a “one size fits all” solution.

An individual’s DNA is analyzed, a genetic mutation is found, and then a customized genetic therapy is produced. In most cases, cells need to be withdrawn from the patient and edited in a lab setting. Then the cells are injected back into the patient.

This is a highly personalized, expensive process.

But it’s also important to remember that one of the biggest costs in health care is chronic treatments – in other words, paying for medical care year after year, decade after decade.

Compare that to gene therapies. They are often one-time treatments. One time, and you are cured forever.

We can think of this as a compressed payment cycle. Rather than paying for treatments over a number of years, or a lifetime, there is just one up-front payment for the therapy.

The other part of the answer is this… There are more than 6,000 genetic diseases in the world that have no known treatment today. This is a massive, trillion-dollar-plus greenfield opportunity.

The best genetic editing companies will gradually develop therapies for every single one of those diseases.

And that means the companies that own the key patents in this space are sitting on patent portfolios worth hundreds of billions of dollars. Biotech and pharma companies that want to use this technology will have to license the technology from these companies.

Meanwhile, these companies trade for half a billion up to $2 billion today. That gives investors an idea of how much upside we have to look forward to.

All stablecoins are not created equal…

Stablecoins are cryptocurrencies that are designed to have a stable value. In most cases, they are backed one-to-one by a fiat currency like the U.S. dollar.

As I write, Tether’s market capitalization is about $3.1 billion. That means it is supposed to have $3.1 billion in reserve… But Tether has long been questioned as to whether it has been maintaining those reserves. It does not provide regular third-party audits of its USD reserves.

And intel is now coming out that Tether has been taking its reserves and buying Bitcoin and other digital assets.

In fact, court documents revealed that this happened on the Bitfinex exchange. The two are now under investigation by the New York attorney general.

MF Global comes to mind. In 2011, it was revealed that the foreign exchange company had dipped into customer accounts and used the money to cover its own shortfalls. The company eventually went bankrupt. It took some $1.5 billion in customer money with it.

So Tether is a stablecoin to stay away from. The good news is, there are better options.

Take TrueUSD, for example. TrueUSD is 100% backed by U.S. dollars… And it is audited every month by consulting firm Cohen & Company to make sure the reserves are in the bank. That’s a much better model.

The point is this: Stablecoins are here to stay… and it is very important to understand the quality of the company behind the stablecoins and whether those real-world assets are really there.