Today we’ll continue our look at how the pandemic impacted consumer behavior through the lens of another company that we all know well – Amazon.

Amazon’s CEO Jeff Bezos recently released his final annual letter. He’s stepping down next quarter to focus on other things, one of which will be commercial spaceflight via his private aerospace company Blue Origin.

It is a pretty remarkable letter, and it’s well worth the read. Bezos tells the story of how the company has created $1.6 trillion of wealth for shareholders since the company went public in 1997.

He included a personal letter from a family that bought just two shares in Amazon in 1997. That was back when shares were still issued as paper certificates. The letter tells the story of how those two shares have had an incredible impact on the family.

It’s a great reminder of how investing is a process that is best done over long periods of time. Wealth is rarely created overnight. And it is typically created after years of hard work, saving, and smart investment decisions.

Amazon has built an incredible business. It has long been an excellent investment. And it has made a lot of money for subscribers of The Near Future Report, even when many thought that there was very little upside left. They were wrong.

The reason is that Amazon has continued to create incredible value for its customers. It consistently provides products and services that consumers, corporations, and governments want. And it does so at very attractive price points.

Which brings me back to the annual letter.

Consumers recognized that value as their buying patterns shifted online during the pandemic – and on a much more frequent basis.

And here’s the thing – the trend isn’t reversing.

Once we’ve signed up for Prime, it is hard to imagine living without it. Amazon was just patiently waiting in the background for a moment like this.

The pandemic was the perfect catalyst for Amazon to pounce. It has successfully expanded beyond more than half of all households, and it has delivered a record year for its shareholders.

Here’s to the next $1 trillion of value!

We’ll start off today with an interesting development in the autonomous driving space. It comes from NVIDIA’s annual GPU Technology Conference (GTC).

This is one of my favorite conferences of the year. It touches almost the entire technology industry. That’s because NVIDIA’s GPUs are so widely used for many different applications.

At GTC ‘21 earlier this month, NVIDIA revealed its third-generation system on a chip (SoC) for autonomous driving. This is the hardware that powers NVIDIA’s self-driving software. And its performance metrics are impressive.

For context, let’s look at a little history…

NVIDIA began to execute its self-driving technology strategy back in 2016. That’s when I first recommended the company. What was smart about NVIDIA’s approach was that it developed an AI-enabled SoC for self-driving cars as well as a lot of the key software elements.

The idea was to produce the hardware and the software – the full stack – so that it could be sold to carmakers to give them a head start on producing self-driving cars.

After all, not every carmaker can be a Tesla. Most of them don’t have the ability to produce all of the self-driving technology in-house. And when carmakers build on top of NVIDIA’s autonomous solution, they will ultimately buy a lot more of their semiconductors.

NVIDIA’s first-generation SoC for autonomous driving was called Xavier. It could do 30 trillions of operations per second (TOPS). That was revolutionary at the time.

NVIDIA followed this up with Orin in December 2019, its second-generation SoC. And Orin can do up to 254 TOPS. That’s nearly a 10X increase in performance.

And Orin is about to hit the streets. The 2022 model of Volvo’s XC90 will be equipped with Orin. Details on that will likely come later this year.

NVIDIA is also working with eight new electric vehicle (EV) companies to design Orin into their cars. They include NIO, Faraday Future, Xpeng, Li Auto, R-Auto, Vinfast, and others. These EV startups are racing to develop products on the back of Tesla’s success.

And that brings us to NVIDIA’s big announcement. Its third-generation SoC is called Atlan. Its performance jumps above 1,000 TOPS. That’s another 4X increase. And compared to the original Xavier, that’s a 33X increase in performance just since 2016.

What’s more, Atlan provides a significant reduction in power consumption. That’s critical for EVs because it directly impacts how far the car can go before needing to be charged.

So the Atlan is absolutely a bleeding-edge product. Carmakers will begin designing it into future models in 2023, and we can expect the first car powered by Atlan to come out in 2025.

The key takeaway here is that self-driving cars are not 10 years into the future, as some analysts suggest. We are no more than a few years away from rapid deployment and adoption.

That’s why I’ve made a presentation on the best ways for investors to get in position now. You can watch it right here.

We can expect to see more and more self-driving cars on the road in the very near future. And NVIDIA is well-positioned to capitalize on this growing trend.

Blue Origin just successfully completed an exciting launch. This was its 15th and final test flight before the real thing, which will launch with a crew of astronauts.

For the sake of newer readers, Blue Origin is an aerospace company backed by Amazon founder Jeff Bezos. The company’s goal is to enable regularly scheduled commercial flights to space.

And now that Bezos has stepped down from his full-time role as Amazon’s CEO, he has more time to focus on Blue Origin. He was on site for this launch.

The mission involved launching both a booster and capsule up into space above the Kármán line – the altitude where space begins – and then returning both back down to Earth safely. The booster will be reused in future launches.

Here’s a look at Blue Origin sticking the landing:

Beautiful. A nice soft landing in the Texas desert.

This launch was a “verification step” for both the rocket and the capsule to ensure they are ready for a manned crew. Interestingly, an astronaut team did go through standard protocols as a practice run both before and after the launch. They did everything but participate in the actual flight. 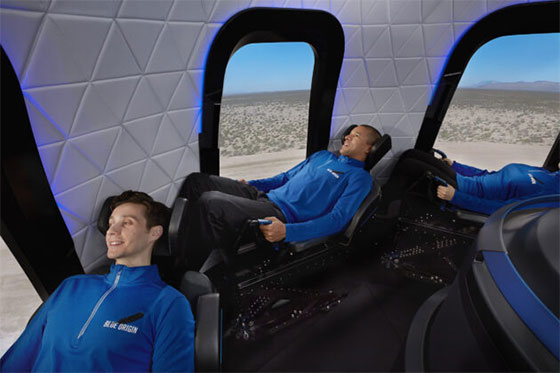 The next flight, NS-16, will be a manned mission. We don’t have a timeline on it yet, but Blue Origin indicated that it will happen before the year is out.

So it’s getting real. The new age of commercial spaceflight is upon us.

And as a reminder, I put my name on the waiting list for one of Blue Origin’s future commercial flights. I’ll certainly let readers know if my number is called.

One day, I may be writing The Bleeding Edge to you from space!

Get ready for bonds on the blockchain…

France’s third-largest bank, Société Générale, issued a euro medium-term note (EMTN) on the Tezos blockchain. It may not sound like much, but this has dramatic implications.

This EMTN is a security token that represents sovereign debt in France. We can think of this like a 10-year U.S. Treasury bond. It helps finance government operations, and investors receive a fixed interest rate of return for investing in the debt.

As for Tezos (XTZ), it is currently the 36th largest cryptocurrency in the world by market cap. It is similar to Ethereum (ETH) in that the blockchain is designed to power smart contracts. These contracts self-execute when the agreed-upon parameters are met.

So what we have here is the issuance of bonds on the blockchain. And investors will be able to trade these bonds just like they trade bitcoin, ether, or any other digital assets today.

And the big picture here is that this indicates France is gearing up to launch its own central bank digital currency (CBDC). That’s the real story.

We’ve talked about CBDCs before, particularly as China has begun tests of its own digital currency.

But we shouldn’t forget that CBDCs are more than just blockchain-based versions of national currencies.

To make CBDCs work, countries will need to recreate the entire infrastructure of the modern financial system on the blockchain. That includes the rails necessary for the issuance and trading of sovereign debt.

So this isn’t a one-off thing. France is laying the groundwork for its CBDC.

And this will also enable other assets to be “tokenized” and placed on the blockchain. Eventually we will have stocks, commodities, and other assets trading as security tokens. And that’s going to provide us with all kinds of new and interesting investment opportunities.

We are at the start of a multiyear trend. Readers can expect to hear a lot more about CBDCs and security tokens later this year.

And if you want to make sure you’re prepared for the coming changes in our financial system, you can go right here to learn about my top recommendations in this space.