This is a photo of Huntington Beach in Los Angeles (LA)… this weekend. This was taken on Saturday. Sunday was the same as well.

This made me chuckle because LA is still on lockdown… supposedly. Orders remain to stay at home and only go outside for necessary errands. But it doesn’t appear that it is working very well.

And I’m not surprised. After all, last Wednesday, I wrote about the serological tests performed in LA County. It estimated that COVID-19 had spread to as many as 442,000 people in Los Angeles County, resulting in a case fatality rate near seasonal influenza’s.

And with LA hospitals running at less than 50% capacity, it’s not hard to understand how residents may have had enough of this lockdown. What they see in the paper, on TV, or online seems to be the opposite of reality.

Good for them… and I hope that some of my readers in the LA area were enjoying the beach.

And for the rest of us who weren’t lucky enough to be there, I have even better news… There is more warm sunny weather ahead.

Let’s turn to our insights for today…

Most of us have probably never heard of a company called Reliance Jio. But it’s one heck of an interesting story…

Reliance is an Indian telecommunications company that took a Silicon Valley approach to build out its 4G network.

It built a wireless network from the ground up as a data-only network. None of the traditional circuit-switched hardware was used to make wireless phone calls. Reliance spent $32 billion on the project.

Jio’s marketing strategy was to offer three months of free data and voice. After that intro period, consumers pay the equivalent of just a few dollars per gigabyte of data used. And they get to keep the free voice calls.

This approach is designed to drive mass adoption in a short period of time. And it worked. Reliance Jio is now India’s largest mobile carrier. It has more than 370 million subscribers.

And here’s where things get interesting. Facebook just announced that it is investing $5.7 billion in the company.

So we have to ask – what in the world is Facebook doing investing in Reliance Jio?

Mark Zuckerberg said it is all about working with Reliance Jio “to find new ways for people and businesses to operate more effectively in the growing digital economy.”

What does that even mean? I would be embarrassed to say something like that.

Here’s what Mark Zuckerberg is really up to.

Facebook is doing this to buy influence with the Indian government for its digital currency initiative. And it appears to be working:

The Manhandle” – Prime Minister Narendra Modi and Zuckerberg Get Personal 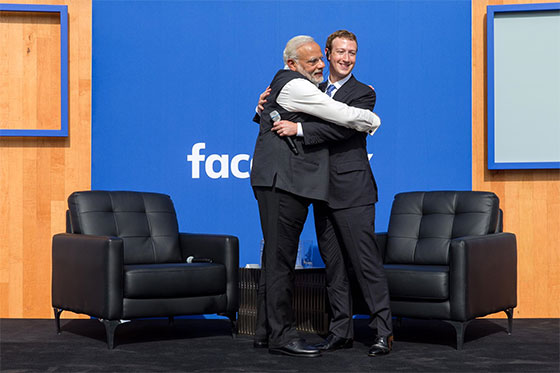 I’ll explain with a little context…

As we know, Facebook has been dealing with major regulatory pushback to its digital currency Libra. That is why it had to tweak its strategy, as we talked about last week.

Well, this $5.7 billion investment is probably the price Facebook must pay to get permission to launch its digital currency in India. It’s buying influence, in other words.

And, of course, Facebook’s goal with Libra and its corresponding digital wallet Calibra is to make sure that those transactions flow over Facebook’s network of software applications.

And the Indian government has already shown a willingness to make radical changes to its monetary system. Back in 2016, the government demonetized the 500 rupee and 1,000 rupee banknotes.

So the writing is on the wall here. I fully expect to see Libra launch in India before the year is out.

For investors, there are interesting implications here.

Facebook won’t be the only company to launch its own digital currency. I fully expect other companies to follow suit. And state-backed cryptocurrencies will be here within the year.

When this happens, it will raise the profile of one technology: blockchain. I fully expect technology companies that support blockchain applications to climb higher. Investors who see what’s coming stand to profit. Learn how right here.

Google is racing to catch Zoom…

Google just announced major new features for its videoconferencing app, Duo. Giants like Google and Microsoft are scrambling to catch up with Zoom, which is winning the battle for videoconferencing market share right now.

Google is pitching Duo’s end-to-end encryption, which makes it extremely secure. Google is playing this up because Zoom’s security has recently been called into question.

Duo is also using artificial intelligence (AI) to improve video quality, even over bad connections. This is a smart move.

As we have talked about recently, the COVID-19 pandemic is slowing down the internet. We are seeing an explosion in network traffic, which in turn slows down connections for many users. This can lead to poor video quality at times.

That’s what Google is trying to address with these new features.

Duo also now allows users to snap a picture that will display the call participants side by side as if they were in the same room together. This is a way to make it “feel” more like participants were physically together for special events.

And Duo now can support up to 12 people on a video call. Eight was the limit previously. And Google says this limit will increase again soon. This is important, as remote business meetings and remote house parties represent a trend that’s booming right now.

So the battle between Duo and Zoom is on.

And to me, the big takeaway here is that Google clearly thinks videoconferencing will remain vital, even after COVID-19 is a memory. It wouldn’t be pushing Duo so hard if it expected demand to fall after this is all over. But the company, yet again, got caught with its pants down to a competitor.

Zoom has already crushed Google, just as Amazon Web Services took a dramatic leadership position in cloud-based services. These are two businesses that Google was perfectly suited to dominate.

Our society has been forever altered. Things will not go completely back to the way they were. Whether we like it or not, digital-first will be the new norm.

A team out of Carnegie Mellon University stepped up to help solve a major problem right now… how to collect early data on the spread of COVID-19. I really like its approach.

Google has been tracking our locations and movement without our consent, worldwide. The extent became apparent with Google’s release of its Community Mobility Reports, which tracks people’s travel patterns. We talked about that earlier this month.

But these approaches can’t give us anything more than a general overview of what’s going on. Regardless of how this information is being collected, the limited amount of information can only provide a high-level view of what is happening in particular hot spots or indicate whether a community or individual is adhering to the lockdown.

Fortunately, the team at Carnegie Mellon University has developed a better way…

The Carnegie Mellon team developed a short personal survey designed to collect more granular data. The survey asks people if they have experienced fevers or shortness of breath recently, and it ties these responses to location data to get a feel for where COVID-19 may be the most prevalent.

To get this survey in front of people, Carnegie Mellon teamed up with Google and Facebook. People using those platforms will be asked to take the survey, and it will be done on an opt-in basis. Nobody is forced to participate, and no information is unknowingly taken from the survey respondent.

This is a much better way of collecting granular data because it’s personalized, provides useful insights, and is done only with the survey taker’s consent.

We’ll get a much better feel for where COVID-19 has been, how many people have had it, and to what extent. This is much better than collecting data on users without their explicit consent.

I would take this one step further and provide an incentive for people to take the survey. For example, a simple $10 gift card could do the trick.

Yes, that would add $10 million in costs for every million survey participants… but that’s small potatoes compared to the trillions of dollars in stimulus the government has pumped in. For $50 million, we could generate a representative survey of the U.S. from five million Americans.

And by using Google and Facebook as the “distributors,” geographic areas can be targeted to make sure to optimize data collection across the country. This would rapidly grow the amount of useful data we can use to discover the extent of COVID-19’s spread in any country.

It’s not perfect or comprehensive, but it is an inexpensive and very rapid way to collect useful data. Ramping up testing capabilities to cover the entire population would cost more than $100 billion… perhaps as much as $300 billion. This would be an unnecessary use of taxpayer dollars.