Yesterday, the Pentagon cancelled the $10 billion Joint Enterprise Defense Infrastructure (JEDI) cloud computing contract that Microsoft won outright in the fall of 2019. Microsoft won that contract to the great dismay of Amazon.

It was a major coup for Microsoft to have won. The software giant has severely lagged behind Amazon – and Google, for that matter – in its technical capabilities related to its cloud computing services.

Microsoft’s cloud computing revenues are not at all representative of its success, or lack thereof, in providing cloud computing services to actual customers. The software giant counts all of its own in-house revenues associated with Microsoft Office 365, Exchange, Github, LinkedIn, Xbox Live, etc. as cloud revenues.

Nonetheless, it must have been an aggressively priced proposal to have won the entire $10 billion deal. And Amazon CEO Jeff Bezos wouldn’t have any of it.

After all, Bezos had been investing heavily in the D.C. area. In 2016, he spent $16 million purchasing the building that housed the Textile Museum in D.C. in order to turn it into his latest personal residence. This was personally disappointing as it was one of my very favorite museums in the capitol.

And in the summer of 2019, leading up to the decision on the JEDI contract, Bezos chose Arlington, VA, as the location of Amazon’s second headquarters, dubbed HQ2. The 2.8 million square foot building designed by world famous architecture firm NBBJ will be a sight to behold. 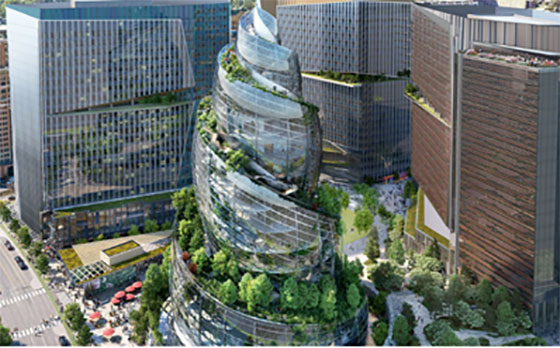 Designed with our DNA’s double helix in mind, one can only wonder if there is some hidden meaning behind what Amazon is really up to…

And with all this “investment” and “commitment” to the D.C. area, Bezos clearly expected – no, demanded – to win.

Amazon cried “foul play” and tied up the Pentagon for more than a year and a half. This delayed the project and pushed the decision into a new administration, one that Bezos and The Washington Post strongly supported during the elections.

The Pentagon’s inspector general found no interference, wrongdoing, or procedural problems with the bidding process. Microsoft won. Amazon lost. Yet the entire contract was canceled.

What was the Pentagon’s “excuse” for doing so? John Sherman, the Pentagon’s chief information officer, stated that, “JEDI was the right approach at the time,” but now, “We’re in a different place.”

Given how much time I spend analyzing cloud-based services and technologies, I find this reply quite odd.

Cloud-based architectures simply haven’t changed that much in the last 18 months. Furthermore, cloud-based service agreements, like the one Microsoft won with JEDI, are designed precisely to manage the varying and evolving requirements of customers.

After all, what it is ultimately selling is a flexible, dynamic compute and storage service.

Yet Bezos was able to shut it down. Even better, the Pentagon has established a brand new cloud services project named the Joint Warfighter Cloud Capability. Microsoft, Alphabet (Google Cloud Services), Oracle, IBM, and, of course, Amazon are all expected to be bidders.

The Department of Defense and the Pentagon basically gave up.

Amazon could have put progress on hold and tied up the government in litigation for years. The truth is that this was a faster way to end the pain. Scrap and launch a new bidding process. The winner(s) will be announced next spring.

And I know at least one company that will come out on top.

That’s what I meant by clout.

Naturally, Amazon’s stock shot to all-time highs, Bezos is now worth more than $210 billion, and Near Future Report subscribers have made a fortune – for the second time in a row – on this stock.

A power plant in space? Is that even possible? Yes, but does it make any sense?

China just announced plans to build a geostationary solar power plant in space. The facilities will be more than 35,000 kilometers (km) above the Earth.

This mission will be powered by China’s Long March 9 heavy rocket, which can lift about 150 tons into low earth orbit per flight.

China estimates that the completed power plant will consist of about 10,000 tons of infrastructure, which will be deployed over 100 launch missions.

And get this – China is planning the first launch for later this year. It’s incredible how quickly this project is moving.

The goal is to have a small-scale geostationary solar power plant in orbit that is generating power within the next 12 months. This will enable China to begin testing the ability to transmit power down to Earth next year.

From there, China will build out the facility through additional launches. The plan is to get the power plant up to megawatt generation by 2030 and then gigawatt power production by 2050. That would require all 10,000 tons of infrastructure to be in place.

At that point, the power plant would occupy an area on the order of square kilometers of space. That would make it easily visible to the naked eye from Earth.

It sounds pretty incredible, doesn’t it?

This is an idea that’s been banged around for years now. The key attraction is that solar panels would be far more efficient up in space because there would be no atmospheric distortion. In the vacuum of space, the efficiency of solar panels is at an absolute maximum.

But there are a number of issues.

For one, can this be done economically? We’re talking about 100 space launches and 10,000 tons of infrastructure here. And it would require extensive manpower to make it all work.

Is it possible to break even on the project and generate electricity at or below the cost to produce it on Earth? So far, the answer has been no.

If the goal is clean energy, does it make sense to launch 100 rockets all manufactured using carbon-based energy?

And the source of the rocket fuel? Even more carbon emissions. Can the power plant’s clean energy production offset this and create a net positive impact? That’s highly questionable, and again, research to date has said no.

And assuming we somehow figure those two questions out, there’s a big technical challenge left. How can the energy produced be safely and efficiently transmitted back down to Earth?

After all, we’re talking about huge amounts of power being “beamed” down. This could be extremely dangerous if this energy was not sent precisely to the ground-based energy “receivers.”

A number of countries, including the U.S. and Japan, have already analyzed a project like this before. The conclusion they came to? Space-based solar power just isn’t practical. It doesn’t make sense from an economical or ecological perspective.

To be clear, I love the idea. But if we have to burn more carbon and spend more money to make it happen, I’d rather we invest heavily in something that can solve our long-term clean energy requirements, like nuclear fusion.

So I have to ask… Does China have some ulterior motives here? Could it be that China intends to use this facility for something else – perhaps military purposes? After all, couldn’t the immense amounts of energy the facility would produce be weaponized?

That’s not the kind of progress the world needs right now. With these global superpowers’ interests diverging right now, a development like this would be in the wrong direction.

I’d much prefer us spending our energy on positive and peaceful projects that will address the world’s grand challenges.

Amazon is laying the foundation for a new self-driving division…

Amazon just struck an interesting deal with a company called Plus. This is an early stage company focused on self-driving trucks.

To start with, Amazon ordered 1,000 self-driving truck systems from Plus. This technology will power the beginning of Amazon’s autonomous trucking fleet.

The Plus Self-Driving Truck 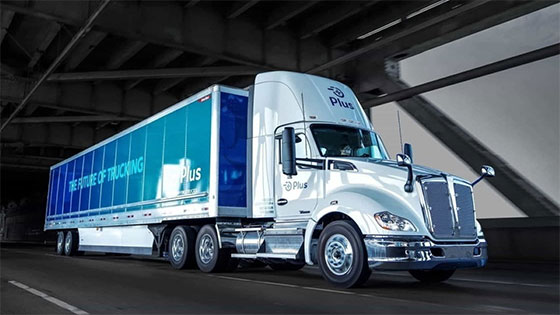 But Amazon didn’t stop there…

What makes the deal interesting is that Amazon purchased a bunch of warrants in Plus. Warrants are similar to options in that they give the holder the right, but not the obligation, to buy a security at a specific price any time before the warrant expiration date.

And Amazon snapped up enough warrants to enable it to buy more than 420 million of these preferred shares. If Amazon exercises all of its warrants, Amazon would own 20% of the entire company after Plus goes public.

Talk about a big move. Clearly, Amazon is very interested in what Plus is working on.

The startup claims that its technology has now reached Level 4 autonomy. That means its trucks are fully self-driving on the highway and in strictly geofenced areas.

And Plus says it is on track to hit Level 5 autonomy by 2024. That’s the full self-driving mode where a steering wheel isn’t even needed.

What’s more, Plus has modeled its autonomous driving system off of Tesla’s implementation. It collects data from every mile driven using its system. Plus has collected about 3.3 billion miles of data to date. This data is fed back to an artificial intelligence (AI) to improve the technology over time.

I guess that Amazon will test out the tech in the 1,000 trucks it ordered, and then it’ll determine if it wants to exercise the warrants to take the large ownership stake in Plus. Doing so would give Amazon an inside view of the company and help it secure future orders.

This would also put Amazon in a great position to acquire Plus outright, should it choose to do so.

And I think that may be what Amazon is up to here. It took the same approach when it acquired Kiva Systems back in 2012. That acquisition became the foundation of Amazon’s use of robotics in its fulfillment and logistics facilities and systems. Amazon now has more than 350,000 industrial robots in use.

It’s clear that Amazon is gearing up to implement self-driving technology in a big way. These latest moves are akin to the company’s moves in robotics back in 2012. FedEx, UPS, USPS, and many others are in trouble.

Tesla’s AI just got even better…

I have said for years now that Tesla is one of the most advanced AI companies on the planet. That’s precisely because Tesla feeds its AI data from every mile Tesla vehicles have ever driven on Autopilot.

And Tesla’s world-class AI is about to get even better.

The company just announced that its custom-designed AI semiconductor is now being deployed in its latest Model S and Model X cars. As a reminder, we can think of semiconductors as the “brains” of a computer. 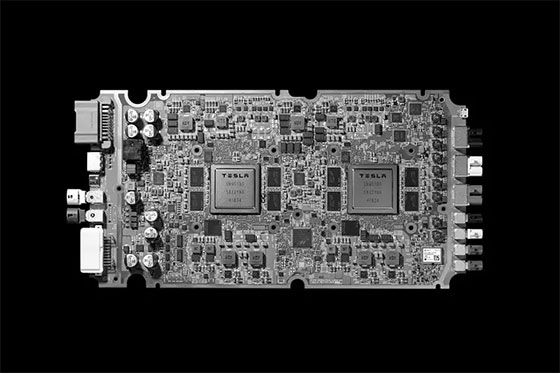 This in-house product development has been years in the making. Tesla signaled back in 2018 that it would design its own semiconductors. It flaunted how much better the performance would be compared to what NVIDIA was capable of providing.

Well, Tesla’s new chip comes in at 72 trillion operations per second. That tops Apple. And it’s a full 21 times more powerful than the NVIDIA chip that Tesla used up to this point.

And keep in mind this is all from a single chip. Pretty remarkable.

There is one thing Tesla’s new chip can’t touch on processing power, however. The human brain.

But at this pace, our lead won’t last much longer.

Tesla’s self-driving technology is going to improve tremendously thanks to this new chip.

And anyone buying a Model S or Model X right now will be on the bleeding edge of artificial intelligence.

And if you’d like to learn more about Tesla’s master plan for its self-driving cars, go right here…