Van’s Note: Van here, Jeff Brown’s longtime managing editor. At The Bleeding Edge, we bring our readers the very latest developments in the world of technology. But we also like to share interesting ideas from our friends and colleagues on occasion…

Today, we’re excited to feature a new essay from our friend and colleague Teeka Tiwari. He’s considered by many to be America’s No. 1 investor.

And today, we’re bringing you his insights into the best way to catch the biggest investment trends… Right as they’re about to explode.

Teeka’s no stranger to making controversial calls… and getting in to revolutionary assets like cryptos before Wall Street knows what to do with them.

You can go here to sign up. And make sure to read on for Teeka’s valuable insights on how to beat Wall Street’s rigged game…

Being no stranger to the wrath of internet keyboard warriors, I usually ignore them. I’m used to having my investment ideas attacked. So that doesn’t bother me.

I remember when I started recommending cryptos as part of a well-diversified portfolio. I thought I’d need a bodyguard for all the hate mail I received.

Or when I started recommending ways to play the private equity and collectibles markets… Again and again, I saw the hate mail pour in.

None of it bothered me. In fact, the more an investment idea of mine is hated, the more likely it is I’ve uncovered a winner.

But this particular comment got under my skin. You see, when someone calls me a liar, it’s a little different.

I can deal with you telling me you disagree with me, or that you don’t like my ideas. That’s just a difference of opinion or personality. But when you attack my reputation, that’s personal.

It all started with a “bragging” marketing email highlighting my track record as editor of The Palm Beach Letter. Apparently, my performance angered several people. Some folks flat-out refused to believe my claims…

Since I took over as editor of The Palm Beach Letter in June 2016, my recommendations have averaged annual returns of 343.3%. In contrast, the S&P 500’s average annual return is just 19.9% over the same period.

So, over the last five years, my model portfolio has done more than 17x better than the market. The comments calling me a “liar” made me realize it’s hard to believe those types of performance numbers.

So in May, I had a trusted third-party firm audit my track record: 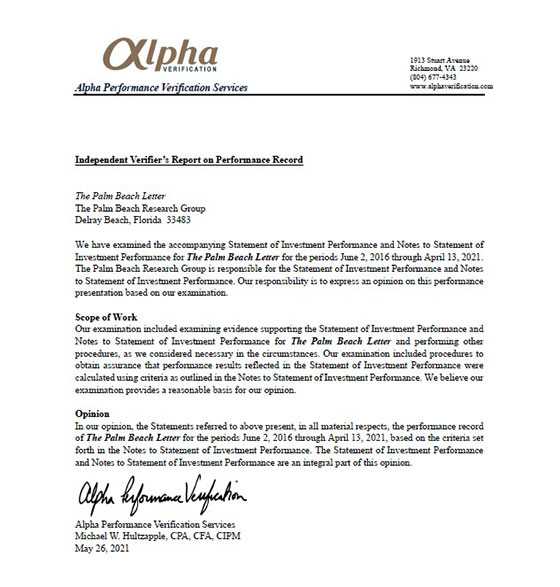 The auditors confirmed everything. And as you can see, the numbers don’t lie… And neither do the life-changing returns my subscribers have made from my research.

Those readers and their letters thanking me are what keep me going.

If you’re one of them, I want to congratulate you for believing in me… my investment ideas… and my publisher, Palm Beach Research Group.

Together, we’ve created what I think is the best performance of any investment newsletter I’ve ever read.

And I can trace our success back to one simple lesson: To make a fortune without already having a fortune to invest, you need to identify massive trends early…

Why It Pays to Go Against the Crowd

This lack of understanding can cause quite a bit of volatility. But what I discovered is if you can get the trend’s growth trajectory right, you don’t need perfect timing.

For instance, back in the early 2000s, I knew the iPod personal music player would be an unstoppable trend. So even when my position in Apple dropped more than 30%, I didn’t panic because I knew the strength of the long-term trend would bail out my lousy timing…

And it did. Apple went on to rise nearly 50x higher off the massive wave of iPod adoption by consumers. Today, it’s a $2.2 trillion company.

In 2016, I started recommending bitcoin and Ethereum. At the time, they were trading at $428 and $9, respectively.

Like the iPod, I knew crypto would be revolutionary, and mass adoption was inevitable. And like Apple’s stock, I saw bitcoin and Ethereum plunge in value early on. I watched both investments drop as much as 85% multiple times.

I never sweated these pullbacks because I knew we were in the very early stages of a massive, long-lived trend. I’m not saying it was easy sitting through multiple 80%-plus drops. Now that would be a lie. It was very difficult.

What kept me going was my belief in my research. And my research suggested that bitcoin and Ethereum would emerge as the most valuable crypto assets in the world. Time has proven my research 100% correct.

And although the crypto market has pulled back in recent weeks, bitcoin and Ethereum are up 8,049% and 22,211%, respectively, since I first recommended them.

The truth is, very few people have the stomach to take the volatility that comes from owning a life-changing stock like Apple or cryptos like bitcoin and Ethereum.

People aren’t quite sure if the trend will take off. So they sell on negative headlines or the slightest hint of a problem.

But as I’ve shown you above… if you’re early and right on a trend, it doesn’t matter about your timing. The trajectory of the trend will always bail you out.

My Next Trillion-Dollar Trade

I’ve unearthed what I believe will be my “Third Trillion-Dollar Trade.”

And it’s a breakthrough that could solve a crisis directly impacting around 800 million people and costing our economy $2.9 trillion per year.

And while Apple and bitcoin gave early investors the chance at life-changing returns, my Third Trillion-Dollar trade has even greater potential…

I believe it could give early investors a chance at 100 years of average S&P 500 gains in just 18 months.

That’s why I want you to join me tomorrow night at 8 p.m. ET for my Third Trillion-Dollar Trade event.

This opportunity is so significant, I’ve invited some special guests from the worlds of entertainment… sports… and global politics to attend.

I’ve even invited a guest from the world of venture capital who promises to help us unlock this whole opportunity – on the spot.

But due to the sensitive nature of this opportunity, I can’t reveal his identity until tomorrow night at 8 p.m. ET.

Friends, you don’t get many chances to be early and right on an idea. They’re very rare. So, if you missed the chance to do that with Apple or bitcoin, this could be your last chance.

Of course, these ideas are uncomfortable. I understand that. But it’s the price you pay for the chance to pull forward 100 years’ worth of stock market gains in 18 months.

So, join me on tomorrow night for my special presentation. And let me show you how you can get in early on the next trillion-dollar idea.

P.S. As a bonus for attending my event, you’ll also receive a free pick. My free picks have had an incredible average peak gain of 1,691%… So you’ll want to watch just for that. Plus, VIP guests get a special bonus report. Click here to learn how to become a VIP today.