Privately funded in the 1960s by the former Chairman of NASA’s Special Advisory Committee on Life Science, the Mercury 13 – as they became known – were not part of a NASA-sponsored project.

Launched around the time of NASA’s Mercury space program, the program was designed to research how women would fare under the same training program that NASA put its male astronauts through. Considering it was the early 1960s, it was very progressive at the time.

25 women in total, all experienced pilots, were invited to take the tests. 13 of them passed the Phase 1 physical examinations that were the same as the Mercury program for the male astronauts, hence the “Mercury 13.”

One of those impressive women was Wally Funk. She was the youngest of the Mercury 13 at just 23 years old. She had received her pilot’s license in 1958 and began flying professionally at the age of 20. And she was the first female flight instructor at a U.S. military base.

And she desperately wanted to go to space. Sadly, the Mercury 13 project didn’t lead anywhere as it was not formally affiliated with NASA.

But Funk didn’t give up. Once NASA started accepting women into the astronaut training program in the 1970s, Funk applied three times, but wasn’t accepted. She didn’t have an engineering degree or experience as a test pilot, which resulted in her being rejected from the program.

Funk never gave up hope of getting to space. And I’m very happy to say that her wish has been granted. 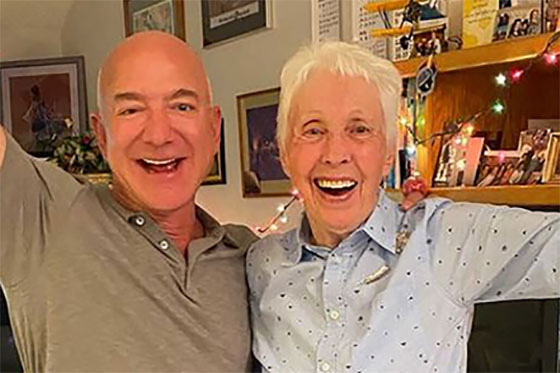 Thanks to the good graces of Jeff Bezos himself, Funk will be a guest on Blue Origin’s first crewed spaceflight scheduled on July 20.

Somewhat ironically, Funk had already put down $200,000 for a ride on Virgin Galactic to experience zero gravity. It appears Bezos wanted to get one up on Richard Branson, who has been aggressively trying to pull in his own crewed spaceflight on July 11 to beat Bezos to space.

I suspect we’ll see some tit-for-tat between the two billionaires as Branson may be able to claim a “first.” But Bezos will probably declare that Virgin Galactic’s flights aren’t above the Kármán line, the border between Earth’s atmosphere and space.

Either way, it’s going to be a blast to watch. And what an inspiration it is to see Funk go to space. At 82 years old, she’ll become a “first” herself, as the oldest ever astronaut.

It’s awesome to see that kind of perseverance rewarded after so many decades of effort. She never gave up.

And hopefully, I can follow in Funk’s footsteps in the near future…

The oldest venture capital (VC) firm focused solely on cryptocurrencies and digital assets, Blockchain Capital, just raised its fifth VC round for $300 million. That amount doubles its previous largest round.

It’s a bit nostalgic for me as I remember the first time I met with one of the partners in San Francisco in the fall of 2015. It feels like decades ago considering how quickly the blockchain industry has been growing.

Blockchain Capital’s first fund was a mere $1.2 million back in 2014. That’s how early the team was. A few months after my first meeting, the firm raised its second fund – a $13 million raise. By Silicon Valley standards, that was still a tiny amount.

Even in 2018, its fourth fund only raised $150 million, which is still on the low side compared to Silicon Valley tech funds.

However, the team at Blockchain Capital made the most of the funding by finding quality investments early on.

It invested in Coinbase, Kraken, Anchorage, and OpenSea; companies that have all had major success in the industry. In fact, some of my best private blockchain investments have been made alongside Blockchain Capital, one of which I just exited for a 20X gain.

These deals have placed Blockchain Capital on an incredible run. The secret to its success has been focusing on blockchain infrastructure-related investments. These are the pillars for what the rest of the ecosystem will be built on.

And in its latest round, it plans to stay true to this mission.

The team is still adamant the blockchain space is incredibly early. I certainly agree, and great opportunities are ahead.

What was most interesting about the round was to see two large financial services companies, Visa and PayPal, invest heavily in the round as limited partners. Typically, large corporate strategics invest in individual companies that might be of future interest.

Interest comes in the form of monitoring technological advancements, partnerships, or potential future acquisitions. In this case, they are investing heavily in a fund, and they’re trusting the general partners at Blockchain Capital to deploy the funds.

PayPal and Visa clearly want to gain access to these early stage companies and don’t feel that they can do this effectively on their own.

Jose Fernandez da Ponte, PayPal’s VP for crypto, said the company wants “to engage with the entrepreneurs driving the future of the decentralized economy and the new wave of financial services.”

And Blockchain Capital can bridge the gap for these fintech (financial technology) companies. This way, it can facilitate introductions and partnerships with companies that plan to deploy blockchain tech.

I am curious to see what projects and partnerships come out of the fund that PayPal and Visa backed, as it can give us a glimpse into the direction these two fintech giants are headed.

The biggest crypto fund ever…

Not to be outdone by Blockchain Capital, Andreessen Horowitz (also known as a16z) just locked in the largest raise in the history of the blockchain industry at $2.2 billion.

The firm was founded by Marc Andreessen, cofounder of the early dot-com company Netscape, and Ben Horowitz, who spent time at Netscape and AOL in the early days.

Their prior success is part of why they can raise such massive sums of capital. They not only were builders of the early internet, but they also made investments in Facebook, Instagram, Lyft, and Pinterest.

These have turned out to be massive winners.

And a few years back, Andreessen and Horowitz started to focus on the next generation of the internet – enabled by blockchain technology. Given the firm’s background and previous success, it makes perfect sense.

What is unique with the a16z fund is its ability to invest in cryptocurrencies. This is a rarity with traditional VCs due to the financial charters of their funds, which require investments only in securities.

However, a16z took the time and spent the money to make this foundational change to its charter in order to invest in digital assets themselves – even when there is no equity involved.

The team openly views the blockchain tech being developed as the new financial and communication system. And these new systems will be structured entirely on the back of blockchain tech.

It’s a sweeping change from an architectural standpoint – a generational shift that will result in the next generation of the internet.

And a16z wants to fund its development.

I’m 100% sure that all of the capital will be put to work. There are simply too many exciting blockchain-related projects right now. And we should remember, Andreessen likes to fund at the early stage rounds like seed and series A. $2.2 billion will fund a lot of fantastic projects. The capital will go a long way.

I view this increasing level of investment in industries as the top of the funnel. As early stage investment levels increase, it expands the funnel as well as the number of successful companies that come out at the other end.

Microsoft is blocking out the competition…

I just can’t let this one go. We’re going to have a look at Microsoft’s latest strong-arm move – a real anti-competitive swipe that is bound to create some unwanted attention with regulators. The move is related to Microsoft’s latest operating system (OS) update… It made me chuckle.

After six years, Microsoft revealed a sweeping update of its horrendous OS. The new version will be called Windows 11.

Here’s a visual of the new Microsoft OS… Does its appearance remind you of another system? 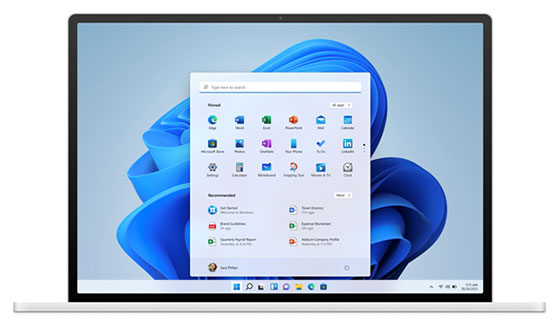 The colors, rounded corners of the apps and windows, soft feel, and simplicity make it seem like it came right out of Apple’s Cupertino, California, headquarters.

Windows even gave the system the ability to run Android apps and widgets, which is similar to what Apple does via its Apple TV and iOS systems.

And while this imitation wasn’t all that surprising, here’s what really raised the hairs on my neck…

By integrating the functionality directly into the code of its new OS, Microsoft is trying to box out the competition.

This part is surprising. If we remember what happened in the 1990s, Windows got in trouble for bundling the Internet Explorer browser into its OS.

This was Microsoft’s attempt to keep Netscape off its platform. And it’s what got Microsoft in trouble in the U.S. and Europe due to antitrust issues. Ultimately, the issue was never fully settled.

Microsoft avoided dealing with some of these issues due to the rise of smartphones. The attention quickly shifted away from Microsoft and toward data surveillance giants like Google, Facebook, and Twitter.

But now Microsoft is going at it again, and in a more egregious manner in many ways. Similar to last time, this is an obvious attempt to block out the competition. Microsoft must feel emboldened, hoping that the attention will stay focused on the other “bad actors” and away from Microsoft.

I don’t buy it. Microsoft is going to get itself into hot water, and it’s already under close scrutiny from the recent hack of its Exchange Servers that exposed tens of thousands of public and private entities.

I expect we’ll see similar antitrust issues arise quickly in the EU and the U.S. In fact, it seems the drums are already beginning to bang. Slack has already complained to European regulators.

And Microsoft appears to be preparing for battle. It announced it plans to ramp up its legal and corporate affairs unit by 20% next fiscal year.

This will be a fight to watch unfold in the coming months, as this is a case where prior rulings are not on Microsoft’s side.