It appears there’s a limit to what money can buy…

On Tuesday, the Securities and Exchange Commission (SEC) filed an action against Sam Bankman-Fried (SBF), the former CEO of centralized cryptocurrency exchange FTX.

The details of this multibillion-dollar fraud get worse by the day, so it wasn’t at all surprising to see the charges. Here’s a statement from the SEC filing:

Bankman-Fried raised more than $1.8 billion from investors, including U.S. investors, who bought an equity stake in FTX believing that FTX had appropriate controls and risk-management measures.

Unbeknownst to those investors (and to FTX’s trading customers), Bankman-Fried was orchestrating a massive, years-long fraud, diverting billions of dollars of the trading platform’s customer funds for his own personal benefit and to help grow his crypto empire.

Hours after the filing, SBF was arrested Tuesday night at a fancy resort in the Bahamas by Bahamian authorities. I hope he enjoyed his last meal living large on other people’s money.

The U.S. Attorney for the Southern District of New York also indicated that SBF faces additional charges for campaign finance violations. SBF was the second-largest Democratic Party donor after George Soros, and even donated much smaller amounts of money to some Republicans through dark pools so as to avoid discovery from the Democratic Party.

Somewhat surprisingly, Caroline Ellison – the current CEO of Alameda Research, which was SBF’s hedge fund that was tightly intertwined with this fraud – and Sam Trabucco, the former co-CEO of Alameda who stepped down earlier this yet, were also named in the SEC filing.

But they haven’t yet been arrested.

There’s already been some speculation that Ellison, and perhaps even Trabucco, turned state’s evidence and went to the Feds in advance to snitch on SBF in the hopes of getting their own future sentences reduced. They were both intimately involved in this massive financial fraud, so it wouldn’t be surprising if they turned on one another.

The fact that the SEC filed its suit less than a month after FTX collapsed – and have already arrested SBF – suggests that prosecutors had help from at least one inside party, perhaps two, that accelerated the process.

Ellison lawyered up with former SEC official Stephanie Avakian, who was an enforcement division chief at the SEC.

Quite an interesting choice by SBF. It’s even more ironic considering that SBF’s parents are both law professors at Stanford. They both enjoyed the benefits of other people’s money, as they’re the owners of multimillion-dollar real estate in the Bahamas that was purchased by their son with embezzled funds.

Neither one will be teaching at Stanford any longer, for very obvious reasons. Whether they were aware of the fraud their son was committing is beside the point. Just the affiliation and the direct link to the fraud is toxic for any organization.

Now the battle begins in what will almost certainly be a long and drawn-out drama.

The U.S. will obviously seek SBF’s extradition from the Bahamas. But matters have become quite complex, as FTX’s lawyers have accused the Bahamian government of working with SBF after the bankruptcy filing to siphon off hundreds of millions of dollars before assets became frozen. Those assets are now believed to be under the control of Bahamian regulators.

Who needs fiction when we have a story like this playing out in real life?

Google’s artificial intelligence (AI) division DeepMind just announced its latest development. What this group is doing is nothing short of remarkable.

If we remember, DeepMind released what I consider to be the greatest breakthrough in life sciences back in August. That’s when it published the protein structures of more than 200 million proteins, as predicted by its AlphaFold 2 AI.

And these predictions proved to be over 94% accurate. Incredible.

Well, DeepMind has recently shifted its focus to computer programming. And the division just released the first version of its AlphaCode AI.

As the name implies, AlphaCode learned how to write computer programs. Users simply give the AI instructions around what they want the software to do. The AI handles the rest.

Now, AIs writing software code isn’t new. As regular readers know, OpenAI’s GPT-3 has been able to write code based on user input for a couple of years.

In fact, OpenAI spun out that functionality into a separate AI called Codex. It trained Codex using a bunch of software code openly available on the GitHub repository.

That’s where AlphaCode comes in.

From the start, DeepMind wanted its programming AI to tackle challenging issues. It trained AlphaCode on a dataset from GitHub. And then it entered the AI into coding competitions to further its training.

And get this: AlphaCode successfully solved about 34% of the most challenging programming tasks in these competitions. By comparison, Codex’s success rate was in the single digits.

I know a 34% success rate may not sound very good. But AlphaCode outperformed 46% of the human competition in these tasks. So it was more successful than nearly half of the field.

And here’s the thing: This is just version one of the AI. It’s only going to get better.

We saw the same dynamic play out with AlphaFold. The first version was impressive, but not incredibly accurate with its predictions. Then AlphaFold 2 demonstrated over 94% accuracy. It was a huge leap.

We’re going to see the same thing happen with AlphaCode 2. It’s going to be materially better. I expect we’ll be blown away at its success rate. And I expect the second version will probably be released within the next six to nine months – that’s how quickly things are moving with AI right now.

So what we’re talking about here is something that will be absolutely transformational in terms of software development.

Once it’s optimized, AlphaCode 2 will enable people without any programming experience to develop software for specific tasks. This is huge considering that there’s a worldwide shortage of software engineers right now.

So AlphaCode 2 is going to solve a massive labor shortage by turning anybody into a skilled computer programmer. I can’t wait to see what comes from this.

A take on humanoid robots to make them more fun…

A relatively new company called Enchanted Tools just released its prototype for a new humanoid robot. And it’s certainly a different take than what we’ve seen before. 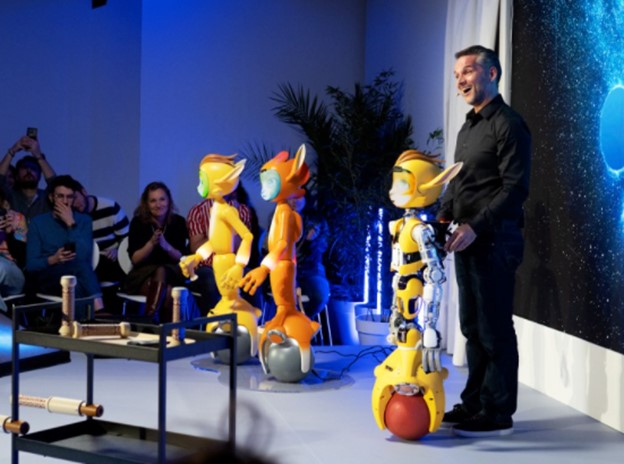 Here, we can see the Miroki robots are quite whimsical looking. In fact, they look a lot like Japanese anime characters. There’s a reason for that.

It’s well-known in the industry that the Japanese are very receptive to humanoid robots. Some of us might remember Honda’s Asimo prototype. And then there was Pepper, which was realized by SoftBank Robotics.

For context, SoftBank Robotics was built around an acquisition of a French robotics company called Aldebaran. This is where Enchanted Tools’ CEO Jérôme Monceaux came from, as his company was acquired by SoftBank.

Aldebaran developed robots designed to provide support for the elderly. And it received strong early adoption in Japan.

Aldebaran was eventually spun out from SoftBank, as it struggled to make the business with Pepper successful. That prompted Monceaux to branch out and start his own company, Enchanted Tools.

And it looks like Monceaux clearly designed the Miroki in whimsical ways that have a similar aesthetic to the Japanese market. But we shouldn’t let the cartoonish appearance fool us – these are highly functional robots.

As we can see, the Miroki robots use a traction ball at the base for movement. This is the first time I’ve seen an enterprise-grade robot use this particular mechanism.

In addition, the Miroki can bend and move freely at the head, ears, shoulders, elbows, fingers, and waist. They’re relatively agile and dexterous.

Finally, the Miroki comes equipped with all the components necessary for autonomous movement. Depth sensing cameras… time-of-flight lidar… ultrasound sensors… all of it.

Put it all together, and we potentially have a fantastic product.

And here’s the most impressive part: Enchanted Tools has only been around for about a year now. The team developed these prototypes in just 12 months.

As for their application, Enchanted Tools envisions that the Miroki robots will provide support function for hospital staff. The robots could be used to carry trays of food, water, and medicine to patients in hospital rooms.

To me, this is a great application for robotics.

We’ve got a shortage of healthcare workers right now. And tasks such as delivering trays to patients is simple but time-consuming. It’s a perfect application for autonomous robots.

Enchanted Tools announced that the Miroki’s initial price point will be roughly €30,000 ($32,000). That’s a great level to facilitate rapid adoption.

That’s a fraction of the cost of a fully loaded full-time employee. So hospitals can deploy these robots much more cheaply than they can hire new staff – and that assumes they can even find the staff to fill all the roles.

Next year is going to be an exciting one for the development of humanoid robots.

Tesla’s Optimus will see great strides. Agility Robotics will almost certainly release a new version of its bipedal delivery robots. Boston Dynamics might put out new technology for more rapid enterprise adoption. And Enchanted Tools and a handful of other promising upstarts will make for an interesting year.

Starbucks is launching a loyalty program built with NFT technology…

Non-fungible tokens (NFTs) definitely aren’t dead. Just like all digital assets, they may have had a tough year, but the industry has been hard at work building infrastructure and applications to take advantage of this kind of blockchain technology.

As a reminder, NFTs are a form of digital collectibles. They allow us to cryptographically secure and authenticate unique assets, or data, on a blockchain.

And NFTs can also enable some incredibly creative applications. They allow issuers to provide benefits to NFT holders in the form of discounts or special access. And that makes them perfect for loyalty programs.

That’s where Starbucks comes in. The coffee giant is testing out NFTs for the purpose of driving engagement with its best customers.

And Starbucks is going about this in a smart way. The company is enabling members of its loyalty program to buy and earn specific NFTs just by being frequent Starbucks customers and engaging in activities related to Starbucks.

These NFTs will then convey specific benefits to holders. Some of the benefits include access to virtual classes around making drinks with Starbucks’ expresso… special invitations to Starbucks’ Reserve Roasteries… and even trips to coffee farms where Starbucks sources its products.

This program demonstrates just how functional NFTs are as part of a brand-loyalty program. Starbucks clearly sees that. And I’m sure many more corporations will follow suit.

The big takeaway here is that NFTs weren’t a passing fad. This technology has tremendous utility if used correctly.

That’s why one of our first private deals in Day One Investor involved investing in a blockchain company focused on brands, loyalty apps, and NFTs. It was a popular private investing round that sold out very quickly.

The company’s called Cultos. And it’s gearing up for its initial coin offering (ICO) in the Spring.

For those looking for a way to maintain long-term exposure to this trend without buying specific NFTs, Cultos’ upcoming token launch is definitely one to watch.