I’m a dog person. I’m also a space person. So it’s no surprise that I’m drawn to the constellation Canis Major – the “Great Dog.” 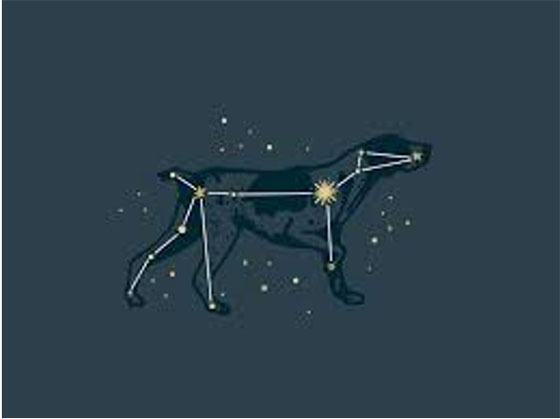 The star at the shoulder – Sirius, the dog star – is brighter than the others that make up the constellation. In fact, it’s brighter than all other stars in the night sky.

And during the summer months, Sirius rises and sets with the Sun. Because the star is so bright, the ancient Romans believed the star’s warmth was added to the Sun’s heat, causing the hotter, longer days.

That’s where we get the phrase “the dog days” of summer.

And in the northern hemisphere, we associate this time of year with sudden thunderstorms… sweltering temperatures… lethargy… drought… and bad luck.

Well, the dog days are now here… and along with it, summer stock volatility. The S&P has had a wild few days recently, dropping nearly 3% from July 16 to July 19. Then, the following days this week, we bounced right back up…

So today, I’ll show why the recent dip in the markets isn’t all bad news… and what investors should be keeping an eye out for the second half of this year…

Welcome to your Saturday issue of The Bleeding Edge. As many readers know, I’m Jason Bodner, the editor of Outlier Investor. Alongside technology master Jeff Brown, I provide readers a vision of what I see coming in the markets… and where we can find the best “outlier” stocks around.

Outlier stocks make up a small portion of the markets… but they’re responsible for the vast majority of the gains. And it’s our mission in my research service to locate these companies and get in position… all before we see rallies really start to take off.

My proprietary algorithms track the fundamental strength of over 6,000 companies… assess their technical patterns… and most critically, follow the institutional “Big Money” players as they start to buy promising companies.

It’s like having “X-ray” goggles for the stock market. And I put this system to work on my readers’ behalf.

My good friend Louis Navellier is no fan of the summer. He calls the volatility “summer shenanigans.” Every year, he says, “They should just close the market for August and reopen it in September.”

And he’s got a point. The summer is a notoriously choppy period for stocks. The following chart shows how July and August are historically mediocre return months for stocks. 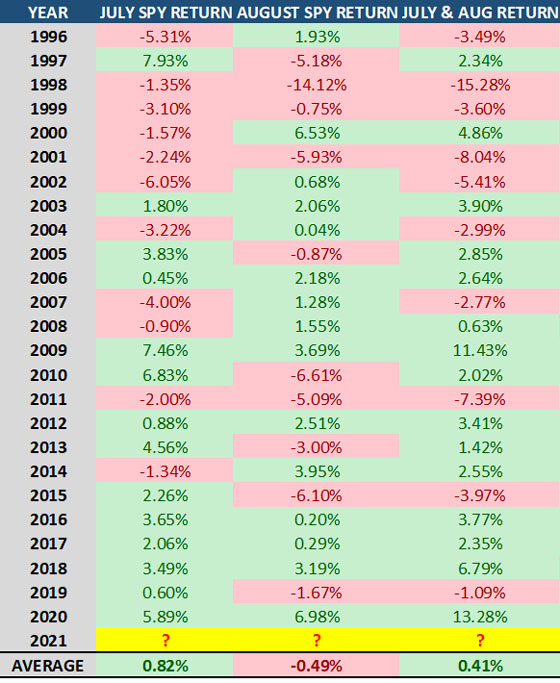 Over the last 25 years, the two months combined returned a paltry 0.41% on average.

And as this July began, I noticed the typical pattern: Buyers dry up, sellers appear, and liquidity wanes. It correlates to Wall Street traders’ lightening risk as they take their summer vacations.

We might not see this selling so clearly in the S&P 500 charts. But using our X-ray goggles, we can clearly see the Big Money Index (which tracks institutional buying and selling) is dropping like a rock: 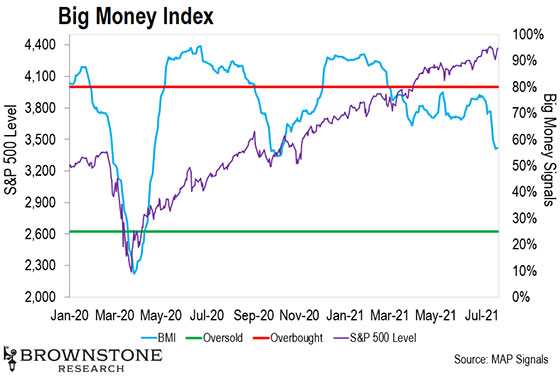 As we can see, the BMI is below its March low – which was another bumpy time for stocks. In fact, the BMI is approaching its October levels, when election risk translated to stock market jitters and lightening of risk.

But we should also notice the clear deviation… The BMI might be falling, but the S&P is headed up.

This divergence is key. Why? Because Big Money loves to pull a fast one…

Like magicians, institutional buyers will misdirect you. The markets rise while they all exit stage left. You’re busy looking at rising stock prices while they are quietly selling out of their risk to go on vacation.

So the BMI is falling, but we can see the indexes haven’t cracked yet. And the key question is… When will they?

Our data has an answer…

Let’s consider the 30-year history of the Big Money Index against its shorter-term 10-day average.

Over its 30-year history, the BMI spent the vast majority of its time above 65%. But the 10-day average (about two trading weeks) dropped below 65% on 51 occasions.

And when the 10-day average dropped below 65%, it stayed there for around 20 days. Note too, that when those periods came along, the S&P’s average performance was a meager 0.68%.

And guess what? Our 10-day average is currently below 65% and has been for roughly 10 days now.

The chart below shows red when we’ve been in this state in the past. Notice what typically happens during the red patches… 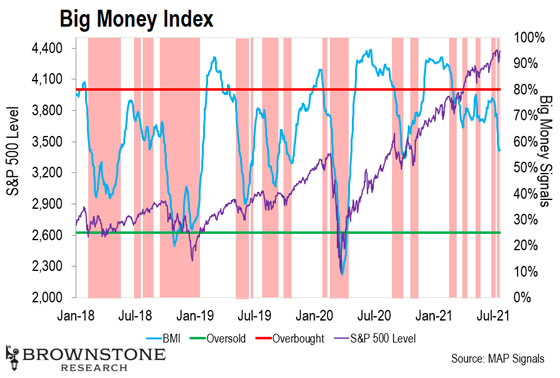 As we can see, these periods often appear alongside some rough or choppy market action.

And we just hit a red patch. So the BMI is forecasting volatility.

While that’s nothing unexpected for July and August, this gives us some context for understanding the bigger picture… and what we can look forward to in the months ahead.

Because herein lies the opportunity…

Get Ready to Pounce

If and when any groan-worthy pullbacks arrive on our doorsteps in the near future, history also provides some advice for how to take advantage of these dog days…

Take another look at the historical returns through the end of the year. 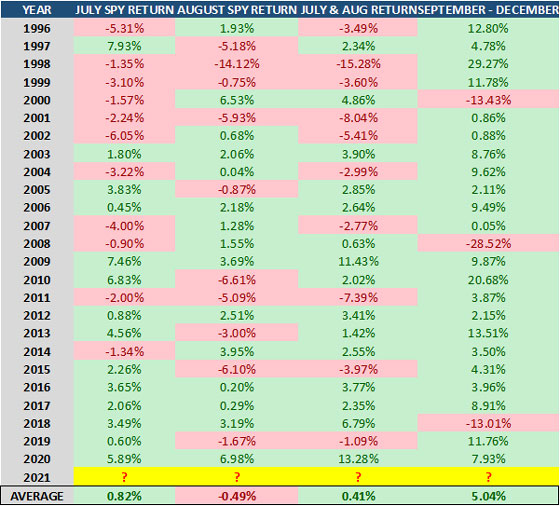 We have a lot to look forward to in the back half of the year. Historically, September to December offers an 11x expected positive return over July and August.

We expect in the last four months of the year to make 5% on average, based on the past 25 years. In fact, there were only three years in which returns were negative for this period.

And that means we should buy any dips in the next month or so with abandon. I would be ready to pounce on my “lusted after” stocks in case of any discounts.

Because after the current period of volatility, September through December holds exciting promise for stocks.

So let’s not sweat the dog days of summer, no matter what we might hear from the doomsayers and stock market bears out there.

As my recent trip to Asheville, NC has shown me… people are out there spending. 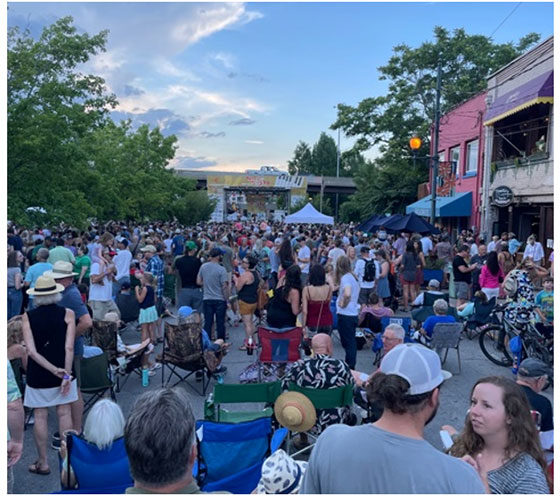 Crowds are out and about in Asheville

That’s a bullish sign for the economy. And we’re going to see more strength as the economy continues opening up once more.

So instead of worrying, let’s embrace whatever volatility is in store with a buy list.

P.S. In case you haven’t heard, Jeff Brown is hosting an investment summit next Wednesday… and this is an event you won’t want to miss.

You see, he’s stepped outside the technology realm for the first time… to look at the broader investment space.

And he’s spotted a “glitch” in the stock markets… one that can enable you to predict which stocks are about to jump, even weeks in advance.

Better yet, it could help you build your nest egg for retirement. His research showed more than 17,000 opportunities where you could have used this glitch to double your money… or more.

Now, this “glitch” has long been the secret of the financial elites on Wall Street. But Jeff’s determined to turn the tables for regular investors.

So if you want the whole story… including a free “glitch” stock name and ticker you can invest in right away… then simply go right here to save your spot for next Wednesday, July 28, at 8 p.m. ET.

It’s going to be a night to remember…