Well, this is certainly an interesting beginning to the year.

With the U.S. taking out Iran’s Soleimani in response to the Iran-backed attack on the U.S. embassy in Iraq, we have unsurprisingly seen a spike in market volatility.

Ironically, as I write this, both the S&P 500 and the Nasdaq are trading slightly up today.

The current U.S. administration is clearly taking a strong stance on state-sponsored terrorism on U.S. assets. It’s a pretty safe assumption that any response by Iran will be met with an even larger response by U.S. forces.

As investors, we should be expecting continued volatility in the markets as this situation unfolds.

My strong personal preference is that none of these events happen at all. But as investors, it is always prudent to have a plan in place when unexpected things happen.

This is where risk management is so important. That’s why investing with stop losses is smart. We can protect profits in the event of unexpected events.

If this market volatility causes a broader 10–20% pullback, that would be an opportunity to capitalize on. I’m going to be tracking the markets closely through these developments and looking for investment opportunities that may be created by unrelated market volatility.

Verizon gave us some great news about its 5G push over the holidays. It went live with 5G wireless network coverage in 31 U.S. cities in 2019. Its original target was 30… so it is ahead of schedule.

Verizon also announced that it has launched 5G in 15 NFL stadiums. That’s big.

Anyone who has been to a large event with a lot of people recently, such as an NFL game, knows that 4G coverage tends to get overloaded very quickly. That results in dropped calls and the inability to make or receive calls and text messages or access the internet.

That won’t happen with 5G. There’s a lot more bandwidth to support large crowds of people. And, of course, it’s almost unbelievably faster, as our 5G speed test proved.

Large venues, like a stadium, are an ideal place to highlight the capability of 5G technology. This was a smart marketing move by Verizon.

Looking forward, Verizon announced that it’s expanding 5G coverage into three more cities to kick off the new year. They are Hampton Roads, Virginia; Columbus, Ohio; and Cleveland, Ohio. For those readers who live there, I’m jealous.

Plus, the John Glenn Columbus International Airport now has 5G coverage. That makes it the first U.S. airport to get 5G. We’ll see 5G come to more airports this year. That will be a focus in 2020.

Now, it’s worth noting that 5G coverage isn’t perfect in any of these locations yet. The small cell architecture of towers and base stations hasn’t been completed.

So 5G is only available in certain parts of these cities right now. We can think of it like Wi-Fi hotspot coverage. But this is only short-term. Over the coming months and years, cities will be built out for 100% coverage of 5G.

From a big-picture perspective, Verizon expects to have about half of the U.S. population covered with its 5G wireless networks by the end of this year. We can expect the other wireless carriers to have similar targets.

This is a rare chance for the carriers to attract customers away from their competitors. Whichever company is the fastest to offer high-quality 5G coverage to consumers could capture serious market share this year. That’s an opportunity that only comes around once per decade.

And as I outlined recently, one of my major predictions for 2020 is a tidal wave of 5G devices. Hundreds of millions of 5G-enabled devices will be sold this year.

And every single one of them will need an essential component. And I’ve identified the one company that produces that component. That’s why it’s my No. 1 large-cap 5G stock for 2020.

If you make only one 5G investment this year, it should be this one. Full story here.

In my research over the holidays, I came upon a fascinating patent that we need to talk about. Amazon filed it on December 26, which is an odd time to publish a patent.

Obviously, nobody is paying much attention the day after Christmas. That leads me to wonder if Amazon didn’t want anyone to see what it is working on.

The patent details a system for using palm recognition to enter a retail store. With this technology, consumers can simply wave their hands in front of a sensor to enter. It’s a way to biometrically identify Amazon customers. 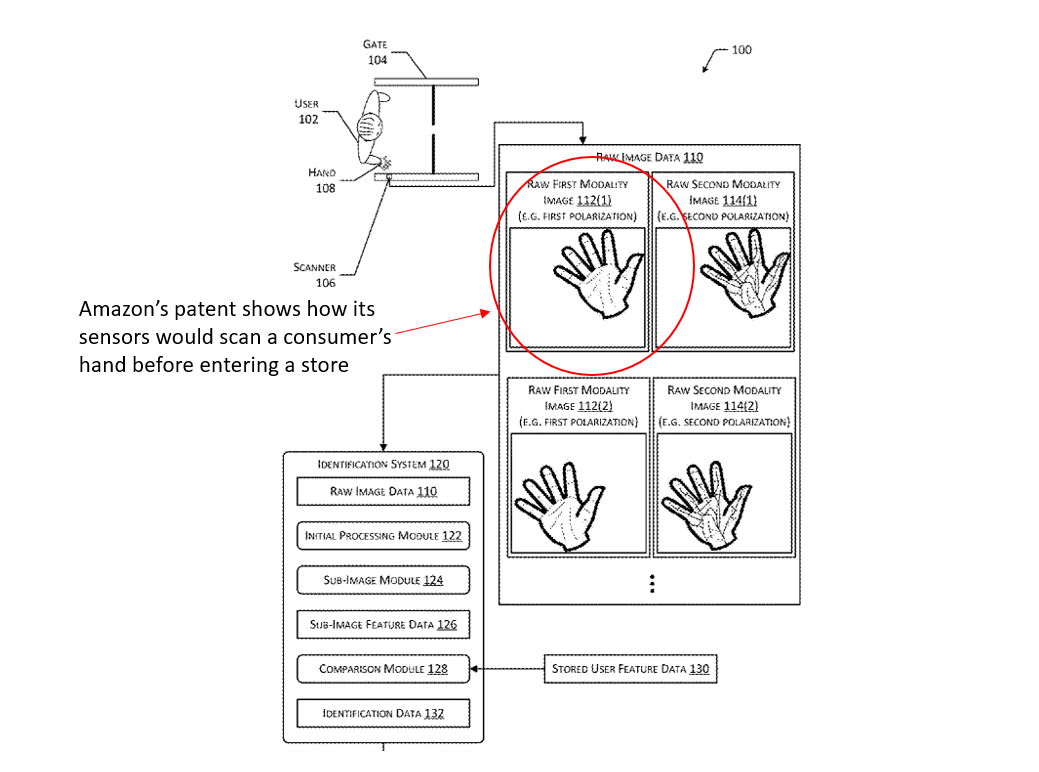 We have talked several times before about Amazon’s Go stores. These are stores where you scan a barcode from your phone to get in. That links you to your Amazon account. Then you take whatever you want from the store and walk out.

There are no lines… no checkout counters… and there’s no need to speak with anyone. It’s just pure convenience. Amazon bills your credit card on file when you leave.

Well, Amazon’s new palm recognition system would ramp up the convenience even more.

Instead of taking your phone out and fiddling with the app, you would just take a second to place your hand over the sensor and walk in. It’s completely frictionless. No need to even take our smartphones out of our pockets.

I love technology ideas like this. Tech companies that can remove friction, increase usability, and provide maximum convenience for customers are wildly successful. This is one of my core investment theses in any of my own investments as well as those I recommend in my research.

It’s ironic but not surprising that Amazon is building the most interesting technology in the retail shopping space. The incumbent retailers are just sitting on their hands, seemingly waiting to be disrupted.

One of the most exciting things to watch in tech this year is Amazon’s expansion of its cashierless stores from its smaller Amazon Go stores to larger, midsized supermarkets.

I’m predicting that Amazon’s midsized Go stores will be a huge success this year wherever they are built. This patent filing makes me even more excited about what will be deployed this year.

And no matter where the first store opens, I or one of my team members will be on-site checking it out.

eGenesis is making progress with its biofactory for organ transplants…

Shifting gears to the world of bleeding-edge biotech…

We talked about early stage company eGenesis back in November. This is a company founded by famed Harvard geneticist and entrepreneur George Church. Its goal is to grow human organs in animals for transplantation.

I know this is a little on the strange side, but it is important work. There are more than 100,000 people in the U.S. waiting on an organ transplant right now. And 20 of those people die every single day because they didn’t receive an organ in time. There just aren’t enough human organs available for the people who need them.

eGenesis wants to solve that problem.

As a reminder, eGenesis uses CRISPR genetic editing technology to modify the DNA of animal organs so the human body will accept them. And it is starting with pigs.

Well, over the holidays, the team provided an update. Working on pig cells, the team used CRISPR to remove three pig genes and insert nine human genes in order to make it compatible with humans. Then it created pig offspring to see if the edits “stuck”… And they did.

This basically means that eGenesis has created a special breed of pig whose organs can be transplanted into humans at any time. We can think of it like a biofactory of pigs that will save many human lives. And not to make light of a serious subject, but we’ll still be able to enjoy the bacon!

Again, I know this is a little strange – and, for some, uncomfortable. But it’s a great example of how bleeding-edge technology can be used to literally save lives. Today, we already use a graft of a cow heart to help mend a human heart. So xenotransplantation is simply the next logical step toward solving the organ transplant problem.