Is it possible? Is the brick-and-mortar retail giant all in, too?

If its patent filings are any indication, the answer is a big YES.

As if hoping to go unnoticed… Walmart filed seven patents at the end of December. The patents relate to producing and selling virtual goods in metaverses. One of them specifically called out the use of cryptocurrencies and non-fungible tokens (NFTs).

These filings are in addition to 13 others related to virtual environments for shopping, cryptocurrencies, digital marketplaces, and NFTs.

Walmart even went so far as to trademark new brands such as “Verse to Home,” “Verse to Store,” and “Verse to Curb.”

Thankfully, it’s not following Facebook’s (Meta) lead and renaming itself “Walverse” or anything ridiculous like that.

It’s very useful to track patents because they give us a glimpse into a company’s future strategy.

Not surprisingly, Walmart envisions a 3D virtual environment for shopping. The company anticipates interacting with its virtual stores in both augmented and virtual reality.

More interesting, however, is that Walmart is planning to enable a platform… one where other brands can launch NFTs and other digital assets.

This is more akin to Amazon’s marketplace strategy applied to the digital asset space… And this is an incredible battle to watch play out.

After all, Amazon started out purely as an e-commerce play. It focused on building the world’s largest online marketplace for physical goods.

Yet its financial health improved when it launched Amazon Web Services (AWS), which became the engine for generating free cash flow.

That cash flow ultimately funded the build-out of its physical infrastructure. It now has planes, delivery vehicles, and distribution facilities. It acquired Whole Foods. And now it’s expanding into brick-and-mortar locations for groceries, convenience stores, and apparel.

Walmart did the opposite. It started with brick-and-mortar and built remarkable scale. Then it leveraged that infrastructure to support e-commerce.

For perspective, Walmart generated about $75 billion in e-commerce revenue last year, which represents about 14% of its total revenues.

Amazon, on the other hand, generates about 72% of annual revenues from e-commerce, which amounted to about $338 billion last year. That puts Amazon’s e-commerce business at about 4.5 times the size of Walmart.

This is why Amazon’s seeming absence from virtual shopping and digital goods feels odd.

Amazon was early to establish a marketplace for the “sale” of objects that can be printed by 3D printers. And the company was also ahead with augmented reality that enables us to “place” a piece of furniture in our home virtually to see how it looks.

And while Amazon has its own Amazon Coin and has registered cryptocurrency domains, it has largely been absent from metaverse plays, digital assets, and NFTs. That makes me suspicious. Something must be afoot…

It’s impressive that Walmart understands the importance and excitement of digital goods, NFTs, and digital worlds like metaverses.

Metaverses are places where we can shop, interact, and transact. And businesses like Walmart can bridge these virtual and physical worlds in useful ways in our daily lives.

And I have to believe that Amazon understands that even better. We’re in for an incredible 2022.

If you’d like to learn more about the opportunity in the digital asset space, please go here to watch the replay of my recent event.

Walmart and Amazon see it… and so will more and more companies in the near future. We’re on the verge of this technology going mainstream.

Millions of dollars are going to early investors. Please don’t miss out on this opportunity…

Twitter just rolled out NFT features across its platform…

We talked about Meta/Facebook’s plans to add non-fungible token (NFT) features to its platform last week. Well, now Twitter is getting in on the act. This is yet another sign that NFTs are going mainstream.

For the benefit of new readers, NFTs are a brand-new class of digital assets. In their simplest format, they are a form of digital art and collectibles… But it doesn’t stop there.

All kinds of creative attributes and perks can be tied to individual NFTs. We talked about that dynamic last week as well when we discussed the Tom Brady-backed Autograph NFT platform.

As for Twitter, it just rolled out an NFT authentication feature. This will allow NFT owners to prove ownership of a given NFT and then display it as their profile picture in a way that is verified.

This is important because users can easily screenshot a piece of NFT art they like and set it as their profile picture even though they don’t own the digital asset. This is Twitter’s solution.

Once NFT ownership is authenticated, the profile picture will appear as a hexagon, rather than the traditional circle. That’s how other Twitter users will know the person actually owns the NFT. 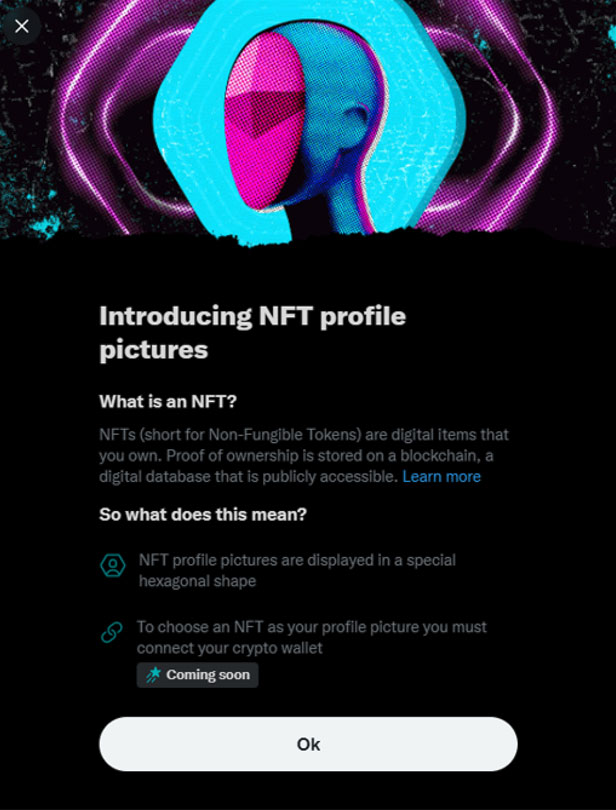 The purpose of this feature can be summed up in one word: status.

Authenticating ownership in this way signals to the world the one true owner of that NFT. It separates that owner from an “imposter.” It can be a way to signal virtual coolness, and in some cases, it can be a sign of status.

This was an inevitable development. Just as Twitter has its verified blue checks, it was natural to verify ownership in a widely used asset class on Twitter – NFTs.

This is Twitter’s first step into the NFT space. I expect we’ll see a lot more NFT features coming from Twitter in the future, especially given Jack Dorsey’s continued involvement. Dorsey is a major proponent of digital assets.

So I see this as an exciting development. Twitter is still very influential in the social media world. As such, this will put NFTs in front of a large audience. That raises awareness, which ultimately raises adoption.

That’s been one theme I’ve emphasized lately… NFTs truly are on a course to go mainstream this year. I explained all of the forces behind this wave of adoption last Wednesday at my NFT Moment event.

And I also shared about how we can invest in the NFT universe… without owning a single NFT. I gave away the name of one of my top recommendations for free as well.

So if you haven’t yet caught up on the replay of this event, please don’t delay. Go here now to watch.

There are millions potentially at stake for investors who plant their stake early.

Facebook, now known as Meta, is furiously working to build out its own metaverse. And the company filed several patents recently that give us some insight into what it has planned.

Facebook’s metaverse patents outline how the company intends to capture even more invasive personal data on users. Specifically, Facebook envisions the ability to monitor facial expressions as users interact in its virtual world.

Why would Facebook want to do this? Well, that’s spelled out in the patents too. The company wants to track how people respond to certain situations.

Does something make us angry or upset? Facebook wants to know about it.

Does something make us laugh or brighten our mood? Facebook thinks it should know about that too.

And that’s not all. Facebook also wants to monitor and track users’ posture and body positioning as they interact in the metaverse.

This is an extreme level of surveillance here that Facebook could never accomplish with its traditional social media platforms. Why?

Well, it’s all about the advertising revenue. This chart explains it all: 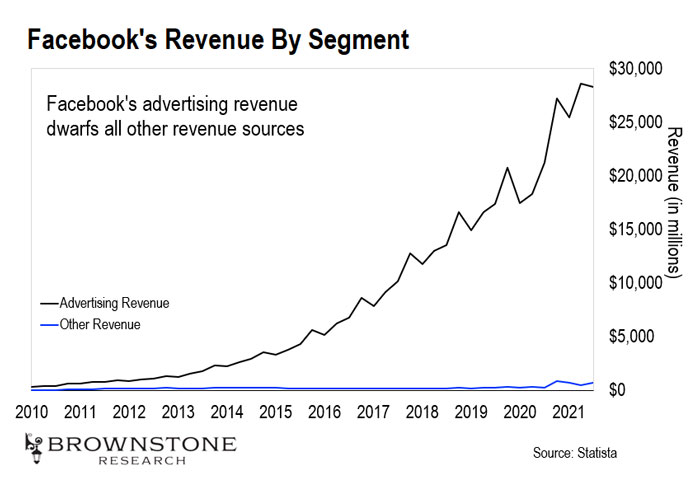 This chart makes it clear as day. Advertising revenue is the only thing that matters to Facebook. Any other revenue is immaterial.

And it gets worse than that.

Facebook has already demonstrated the desire to influence user mood and behavior. It’s well documented that the company ran experiments to alter users’ news feeds to see if it would also impact their mood and outlook.

Well, with the ability to physically monitor facial expressions, reactions, and posture, I would argue that Facebook could go as far as trying to control our minds.

For example, if the company recognizes that certain events in the metaverse make us more likely to purchase a product, what’s to stop them from creating those events and then presenting us a product advertisement in just the right way?

To me, that’s akin to an attempt to influence our subconscious mind.

A form of mind control, in other words. Consumers unaware of Facebook’s underlying technology would likely never understand the company’s manipulation.

Facebook’s plans for the metaverse here should absolutely frighten us.

But sadly, I think these plans will work. Most people will focus only on the immersive experience with friends. They won’t realize that they are being intentionally manipulated.

The good news is that we can choose not to engage in Facebook’s metaverse. And there will be many other metaverses that are much more respectful of our privacy. One of the easiest ways to determine where to hang out is to understand the business model of a given metaverse…

If it is driven entirely by advertising, that’s one to avoid.

Let’s wrap up today with a company called Animoca Brands. This is an interesting story that highlights how powerful the NFT trend has become.

Animoca Brands is a Hong Kong-based company founded in 2011 to revive and remaster old video games. And as we might expect, it has been a small, relatively obscure company for most of its history.

But that changed in a big way about 18 months ago. That’s when Animoca pivoted and became a major investor in NFT and metaverse-related projects. In fact, the company has a stake in more than 150 of these projects.

The Sandbox, Decentraland, Axie Infinity, Open Sea, MoonPay, Uplands, and Yield Guild are among the big-name projects in which Animoca has invested. As a result, Animoca’s valuation has absolutely exploded.

If we go back 18 months ago, Animoca was a company worth tens of millions of dollars. It hit unicorn status in May of last year when it raised $89 million in an early stage round, valuing the company at $1 billion.

And earlier this month, Animoca completed another funding round that raised nearly $359 million. This gave the company a $5 billion valuation. That means Animoca 5X’d its worth in about eight months.

What’s more, there are some big-time players in the venture capital (VC) and private equity (PE) space investing in Animoca now. Sequoia Capital, Winklevoss Capital Management, and even Soros Fund Management participated in the company’s latest funding round.

And here’s the best part – all of the money Animoca just raised is going to pour into NFT and metaverse projects over the course of this year.

Add that to the $5.4 billion coming from Andreessen Horowitz and a key partner that we talked about last week, and the stage is set for NFTs to continue to boom in 2022. It’s still very early days.

And like I mentioned above, there is just too much opportunity in this space for investors to ignore. Money is simply flooding into NFTs… and we can’t afford to miss out.

So please, if you haven’t already, check out my NFT presentation from last Wednesday here. I want to guide readers to the best projects set to boom this year as adoption takes off.

We really have a lot to look forward to this year.