I’m excited to say that the James Webb Space Telescope (JWST) made it to its final destination a few days ago without any problems.

Its journey took it about one million miles from Earth, or about four times the distance from the Earth to the Moon. Along the way, it successfully unfurled its tennis court-sized sun shield and unfolded its mirror array.

The JWST is the most complex telescope ever constructed. The fact that it made it to its final destination, LaGrange Point 2 (L2), is a great relief. The hardest part is over.

L2 sits on the opposite side of the Earth from the Sun. It’s a gravitationally stable point and extremely cold at -233 degrees Celsius, which is great for the telescope’s performance. I found a cool visualization of the JWST at L2 that allows us to understand the location and orbit.

In order for the JWST to stay in the proper orbit, it needs to make slight adjustments every three weeks or so. This is why saving as much fuel as possible on the trip to L2 was so important.

The more fuel, the longer the JWST will be in operation. When it runs out of fuel, it will eventually drift into interplanetary space.

The current prediction is that, with its current fuel load, it will be in operation for the remainder of the decade before running out. I see something different.

Think about it… Within 10 years, we’re going to establish a base on the moon, conduct the first manned mission to Mars, and start mining asteroids for minerals and metals.

I’m confident that we’ll be able to send out a refueling spacecraft to the JWST with robotic arms capable of transferring fuel to the telescope. It’s crazy to think otherwise. As long as the telescope array remains undamaged, there will always be an incentive to do so.

We’re going to be able to see our solar system, our galaxy, and our universe in ways that we haven’t been able to before. It will take a few months to complete the calibration of the telescope.

But hopefully by May or June this year we’ll start to see some images. After that, the discoveries are going to be out of this world.

Before we get to the rest of today’s insights…

I want to put a special event I’m hosting on your radar.

As I’ve shared over the last couple of weeks, we’re right in the middle of a broad market sell-off. We’ve seen many tech stocks plunge since the beginning of the year. And the tech-heavy Nasdaq Composite dropped 10% in just one month.

Obviously, this is deeply concerning… But I see a major catalyst on the horizon. One of the biggest tech trends of this decade is creating a greenfield opportunity for early investors.

And it could send certain tiny tech stocks soaring over the next few months.

That’s why on February 16, at 8 p.m. ET, I’m going to tell you all about how to profit from the next tech megatrend set to take off this year. You can go right here to RSVP.

Another milestone for nuclear fusion technology…

The U.S. National Ignition Facility in California just demonstrated the ability to produce a nuclear fusion plasma in a laboratory setting. This is yet another major milestone on the path to limitless, clean energy capable of weaning the world off the use of fossil fuels.

As a reminder, nuclear fusion is different than nuclear fission. Nuclear fission produces energy by splitting the nucleus of an atom into two or more smaller nuclei. When most people refer to nuclear power, this is what they mean.

Nuclear fusion, on the other hand, refers to the energy of the Sun. It occurs by combining two hydrogen nuclei. This is a process that releases massive amounts of energy. Unlike nuclear fission, fusion can create energy with very little or, in some cases, no radioactive waste.

And the approach researchers took at the National Ignition Facility was quite interesting. I don’t expect many readers will recognize the name, but this facility is home to the world’s largest laser. And they put it to good use.

In the study, which appeared in the scientific journal Nature, researchers took a small container (2 millimeters) with two forms of hydrogen in it – deuterium and tritium. Then they focused 192 laser beams on the container.

Put crudely, they zapped it.

This created incredibly high temperatures. In fact, the temperatures paralleled what we would find on the Sun’s surface. That ignited the nuclei and created a fusion plasma.

The Target Chamber of the National Ignition Facility 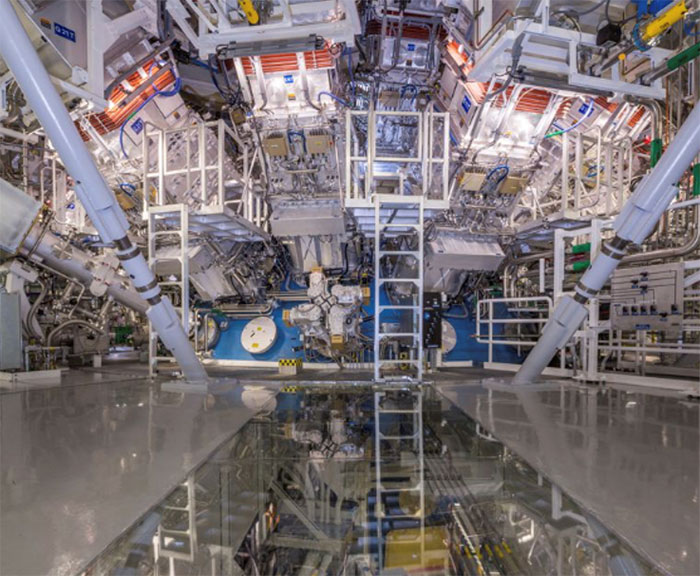 What’s more, the plasma produced more energy than what was required to create it. Ultimately, that’s the key advantage of nuclear fusion.

Once the fusion plasma has been created, and it can be maintained, it will produce more energy than is required to maintain it. Once that happens, it is the equivalent of nearly free, limitless clean energy.

This particular test lasted less than a second, but it proved what is clearly possible. A decade ago, this kind of thing was just theoretical.

With each major milestone in the industry, we get one step closer to accomplishing the ultimate goal.

The next two to three years of development in nuclear fusion are going to be the most exciting in history. By 2030, we’ll all be looking back on this moment in time when it all happened. We have so much to look forward to.

Facebook, now known as Meta, is pulling the plug on its stablecoin project Diem. This must be a major letdown for the company. Facebook’s stablecoin plans were once the talk of the tech world… mostly in a bad way.

As a reminder, a stablecoin is a cryptocurrency backed by a reserve asset. This is usually a national fiat currency like the U.S. dollar.

Diem started out as an even bolder project called Libra. We talked about that back in 2019.

Facebook intended Libra to be a stablecoin backed by a basket of national fiat currencies. It looked very much like a global reserve asset for the billions of users on Facebook’s platform around the world.

And Facebook went so far as to set up a Switzerland-based nonprofit organization for governance. They called it the Libra Association.

Major companies like Visa, Mastercard, PayPal, and even Coinbase originally signed on. The idea is that all members of the Libra Association would share in decision-making for the project.

This was a clever move by Facebook. The idea was to make it look like Libra was a group project.

But the regulators weren’t fooled. Libra was quickly met with fierce regulatory pushback around the world. The threat was perceived as simply being too large for a single company to effectively control a global reserve currency.

And this caused corporate partners to jump ship. Most notably, Visa and Mastercard quickly bailed. They didn’t want to bring unwanted regulatory scrutiny upon themselves.

In response, Facebook rebranded Libra to Diem. Except Diem would be a simple stablecoin backed only by one fiat currency – the U.S. dollar.

In addition, Facebook partnered with a crypto-friendly bank called Silvergate Capital in May of last year. This was an attempt to give the appearance that Facebook was no longer trying to step into the currency business in such a heavy-handed way.

The relationship with Silvergate was designed in a way that Silvergate would be the one issuing and managing Diem, not Facebook. This was done specifically to appease the regulators.

But even that didn’t work.

I suspect that Facebook was told in no uncertain terms that it could not move forward with the Diem project. That’s why Facebook just sold all of the technology and assets related to Diem to Silvergate Capital.

Silvergate paid $182 million for Diem. This consisted of $50 million in cash and $132 million in shares of stock.

So Facebook is now officially out of the stablecoin business. Now the question is… What does Silvergate plan to do with Diem?

Clearly, the bank must value the technology and believe that it has a shot at launching its own stablecoin. Silvergate holds a unique spot in the industry as a publicly traded, crypto-first bank. 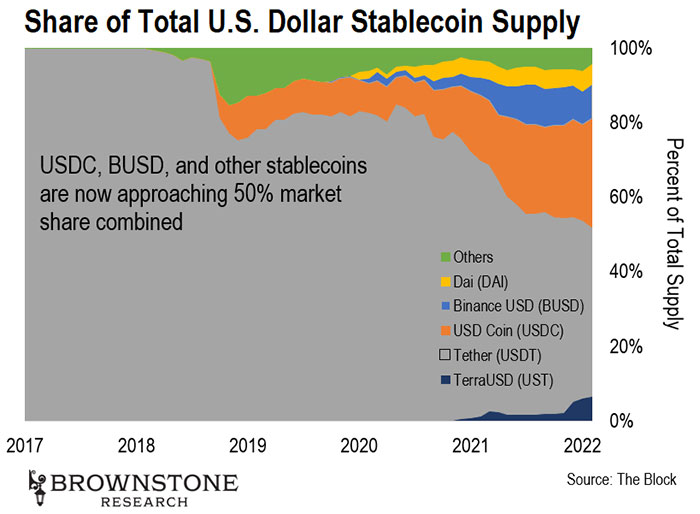 The increasing number of well-managed stablecoins in the industry is certainly a good thing. It reduces the overall risk in the industry that for a period of time was so heavily concentrated in the stablecoin Tether. Tether continues to lack the kind of transparency necessary to provide confidence that it can maintain its peg to the U.S. dollar.

And we can see the impact of these changes in the chart above. In 2018, Tether pretty much had the entire market.

However, since last year, USDC, BUSD, and a couple of others are now approaching 50% market share combined. I expect this trend to continue as large institutional capital shifts to stablecoins like USDC that hold 1:1 assets for each stablecoin issued.

Fireblocks is a platform that enables financial technology (fintech) companies and digital asset exchanges to host cryptocurrency trading on their own platforms without needing to build their own infrastructure.

In this way, Fireblocks is a backdoor to the crypto markets that many of us have used without knowing.

In fact, some major players in the industry use Fireblocks’ technology. Crypto.com, BlockFi, and Galaxy Digital are some of Fireblocks’ most notable clients.

These firms each enable Fireblocks’ trading features under their own branding.

So Fireblocks has become a piece of critical infrastructure in the industry. And the company’s growth has been staggering.

Fireblocks’ initial funding round was in November 2018. The company raised $3.9 million, which valued it at $12.7 million.

Fireblocks went on to raise $16 million and $29.2 million, respectively, in its Series A and Series B funding rounds. This put the company’s valuation at $104.8 million in November 2018.

Then what happened next tells the story…

The next generation of the internet is being built on blockchain technology and digital assets, and it’s all happening in a fraction of the time it took to build the current generation.

And Fireblocks is one of the critical pieces of infrastructure that many are actually using but don’t know anything about it.

This is a company that would benefit from a public listing. So, we’ll keep a close eye on it. We’re in for another fantastic year in the blockchain industry.

And if you’d like to hear about the opportunities I see for investors in this space, please go right here to learn more.