When I was younger, most of the kids were into sports like football or soccer. But I got into computers and math. I learned how to write simple programs in BASIC.

Apparently, the apple doesn’t fall far from the tree.

The other day, my 10-year-old son came home after his coding class. He was finishing his unit on Python. This is the same coding language used by Google and Facebook and large game developers.

Liam proudly showed me what he had done. He’d created an artificial intelligence (AI) bot that asks the user questions and learns from its answers. It stores the answers into a database that can be thought of as a “brain.” The more you interact with it, the more it learns.

My mouth was on the floor – what I thought was a complex concept was a simple exercise for my youngest boy.

This is the future.

And while anecdotal, it’s a sign that we are only now scratching the surface of what’s possible.

We’re going to see immense progress in AI over the coming years. That’s why we should be keeping a close eye on progress in this space.

And in today’s essay, I’d like to share one simple way to gain exposure to this technology as it changes the world around us…

AI Has Come a Long Way

Let’s start off with a little background… Believe it or not, AI was envisioned almost 80 years ago.

English mathematician and cryptanalyst Alan Turing is largely considered to be the father of computer science and artificial intelligence.

Back in 1950, he was already discussing how to build intelligent machines. Turing wrote a paper on “computing machinery and intelligence,” and five years later, the first AI program was presented.

AI programming and machine learning algorithms got better and better but eventually butted up against the restrictions of computers. Computers couldn’t process information and store it as quickly as was required.

Yet AI eventually flourished throughout the 1980s and 90s. Maybe you remember the famous IBM Deep Blue?

It was a chess program that beat the world reigning chess champion, Garry Kasparov. It was a remarkable achievement and still seems amazing 25 years later.

And these days, AI is now everywhere you look…

AI Is Saturating the World

AI is a buzzword in today’s media. It’s on your phone and in your house.

But AI technology is much more than just Siri or Google Assistant.

There are deep algorithms that learn from your actions, habits, movements, spending, searches, and even your speech patterns.

So while AI is only beginning to come into its own, it is already impacting commerce.

And when we think of the future applications, things get really interesting.

The health care sector will benefit tremendously from artificial intelligence. It’s estimated that nearly 86% of the mistakes that can be prevented in health care will largely be addressed by AI.

Not only that, but predictive analytics with AI can understand multiple factors influencing our health. Imagine a future where an AI-powered health system predicts when we will likely get a chronic disease.

Preventative care will be predictive!

And as far as retail, we already see artificial intelligence interacting with us.

Amazon is developing AI to power drones to deliver packages. AI influences its website to suggest products and services you may like based on your buying patterns.

And one day soon, virtual shopping stores could be customized with racks filled specifically to your desires and needs.

In addition, IHS Markit estimates the global business value of AI banking will be $300 billion by 2030.

There are already robo-advisors that manage real wealth without an actual person involved. And the AI collects data, enabling us to tailor offers of financial products specific to the individual based on their profile.

And AI is saturating every sector – not just retail, health care, and finance.

The technology sector is an obvious beneficiary of AI. But so will sectors like utilities, real estate, and consumer staples. The applications are limitless.

Will AI Steal Our Jobs?

Along with the excitement surrounding potential AI benefits, there’s also a potential problem.

One common fear is that AI will gobble up jobs. Already we see impacts on manual laborers with robots on assembly lines taking over.

And I don’t know if you’ve been into a McDonald’s recently, but we now order from a touch tablet, not a person, in many locations.

People’s manual labor is becoming less and less essential as time goes on.

And the trend of AI replacing humans is only going to intensify. Some believe by the end of this decade, AI will be able to outperform most human mental tasks.

But the glass is half full – efficiency, life spans, and prosperity will ultimately benefit from the assistance of artificial intelligence.

By taking over repetitive tasks, and the more hazardous ones, automation will free up humans to do more ambitious work, such as one-on-one with customers, developing better products, and yes, managing the AI themselves.

According to a report by the World Economic Forum, for example, artificial intelligence could create 58 million new AI-related jobs for humans by the end of 2022 alone!

And whether you believe AI will negatively impact your life, or enable a bright and uplifting future, AI might be the best investment opportunity of a lifetime.

In fact, pessimists should pay special attention: The best way to hedge against AI negatively impacting your job (and financial stability) is to be invested in it.

One of the most interesting AI investment plays is available at a deep discount right now.

The ARK Next Generation Internet ETF (ARKW) looks for next-generation internet innovations. It has companies in its portfolio that focus on AI, cloud computing, cryptocurrency, and even blockchain technology.

It is highly focused on the future.

And the ETF is down 54% from its prior peak about a year ago.

It’s had big institutional support for a long time, but it has been swept up in the selling recently over fears of interest rate hikes and inflation. 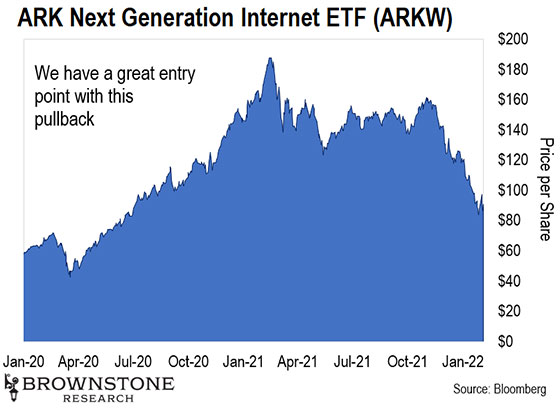 It holds some phenomenal stocks like Coinbase, Tesla, Zoom Video, Teledoc, Shopify, and Block (formerly known as Square). These are just some of the cutting-edge companies held in that portfolio.

But just as artificial intelligence itself has experienced volatile fits and starts since its infancy, expect ARKW to be a wild ride.

If you choose to invest in this ETF, I encourage you to think long-term to allow these cutting-edge technology companies to grow into their own.

AI is here to stay and flourish whether you love it or loathe it.

And either way, I believe the best thing to do is to get on board.

P.S. If you’d like to learn more about the top investments on my radar, I use my own AI-powered system to recommend stocks to my readers…

My technology follows technicals – like our recent bout of selling – as well as fundamentals to spot opportunities. And it even factors in where big institutional players are sending their money.

I’d love to tell you more about how it all works. So if you’re interested in the details, please go right here for the full story.