How bad was Monday? It is always useful to put things in context. 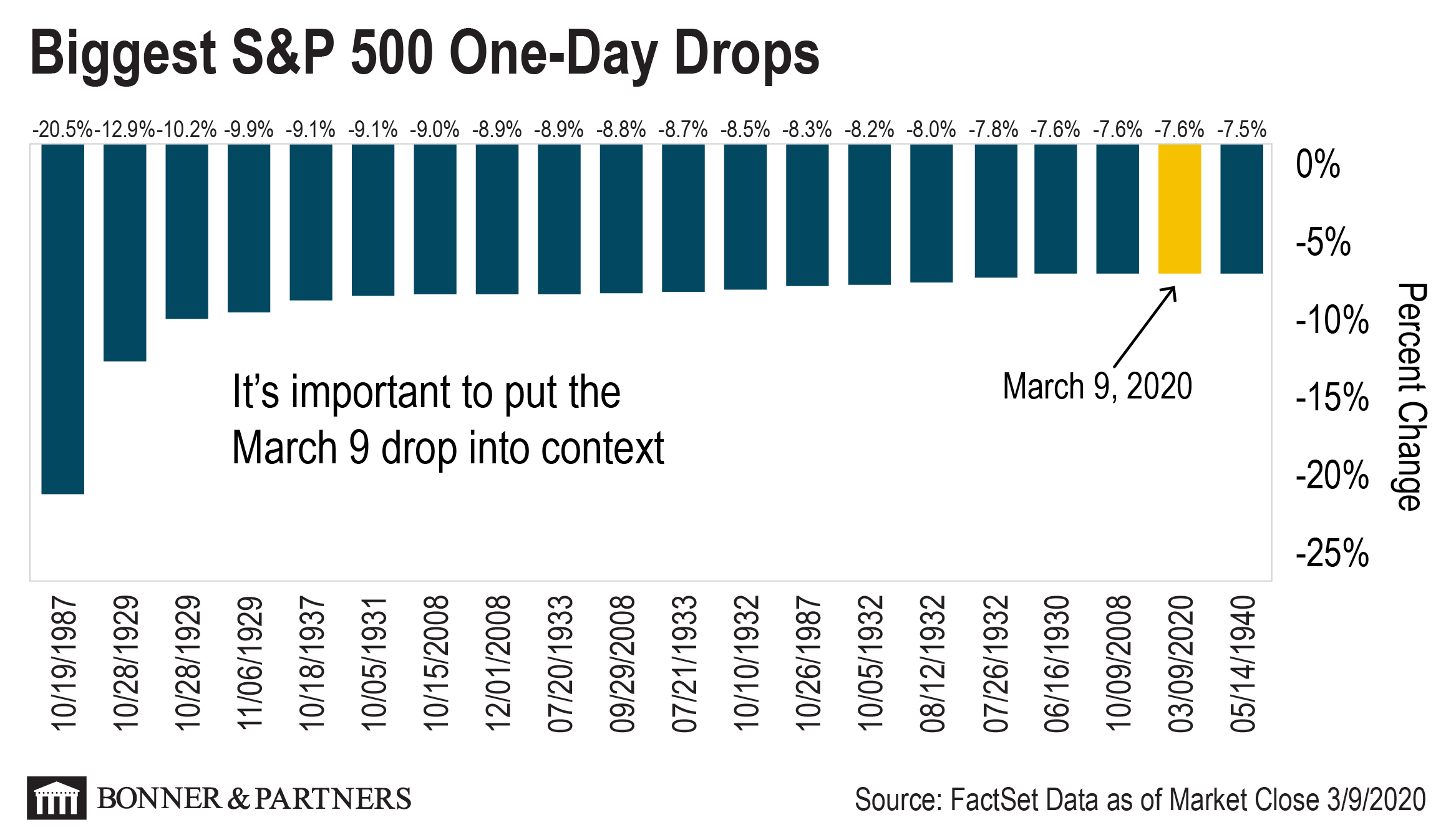 Well, it was certainly one for the record books, but it didn’t make the top 10 (it was number 19).

On Sunday evening and early Monday morning, I heard from a few friends who let fear get to them… They thought it would be a 20%-plus drop. I wasn’t nearly that pessimistic… I’m certainly glad they were wrong.

We bounced back yesterday as quickly as we fell on Monday, and we’re back down again today. This feels like déjà vu… just like last week. And it is safe to say that we can expect even more volatility in the coming weeks.

The World Health Organization (WHO) just declared this afternoon that COVID-19 is a global pandemic. In the past, this designation has been given to other diseases such as the Spanish flu of 1918, HIV/AIDS, and the H1N1 swine flu in 2009.

Calling it a pandemic does seem appropriate given how quickly and effectively COVID-19 spreads. Germany’s chancellor, Angela Merkel, has gone so far to say that she expects as many as 70% of the country’s citizens to become infected.

But COVID’s mortality rate won’t be anywhere near the other diseases. It just isn’t in that “deadly” class. And early indications out of South Korea are that it may be more in line with a strong seasonal flu.

As always, I’ll keep tracking this trend. But for now, on to The Bleeding Edge…

My longtime readers know that we’re now living in the age of quantum supremacy. That means today’s quantum computers are exponentially more powerful than even the most advanced classical supercomputer.

Google announced the release of TensorFlow Quantum (TFQ) this week. This is an open-source library for using artificial intelligence (AI) and machine learning (ML) on a quantum computer. This move reveals Google’s quantum computing strategy…

It simplifies the use of AI. And it provides blocks of code that can be reused so developers don’t have to write code from scratch. Basically, it enables software engineers who aren’t experts in artificial intelligence to use the incredible technology.

Google made TensorFlow available for free as open-source software… And that accelerated the use of machine learning across all industries.

Remember, quantum computing is the key to conquering some of humanity’s greatest challenges. Quantum computing is powerful enough to tackle tasks like long-term weather prediction, producing stable nuclear fusion reactions, and even finding life outside our solar system.

With such potential, we might be wondering why Google would release high-quality, incredibly high value, complex AI software for quantum computers for free.

It’s a smart strategy. And we can expect to see more and more companies migrating to quantum computing as a result.

While we are the topic of Google’s “hidden” motivations, let’s talk about its autonomous driving division Waymo.

Last week, I said Waymo is nearly ready to go live. It is busy buying influence and building partnerships with big players in the automotive industry.

Well, Waymo executive John Krafcik just revealed the company’s secret agenda. At a conference in London, Krafcik told attendees that Waymo’s role could be “just focusing on the Driver and leaving the rest of the customer [experience] to others in the industry.”

That means Waymo doesn’t want to operate its own self-driving fleets. Instead, it wants to license its self-driving technology to other companies and have them run the fleets. That’s why Waymo has been buying influence and building partnerships.

And that means its self-driving service in Phoenix, which we talked about last October, is just a demonstration. It’s to show that the technology works so others in the industry will adopt it.

This is the same strategy Google used with its Android operating system.

At first, Google bought Motorola’s mobile phone division to launch its Android phone. But Google had no intention of becoming a mobile phone manufacturing company. It just wanted to show the industry what Android could do. Then it made the Android software open source so other companies would adopt it.

And why did Google do this? Well, to gather data on consumers, of course. And then it monetizes that data to its advantage.

Today, the Android operating system runs on nearly 75% of all smartphones worldwide. That means Google is collecting data on three-fourths of all smartphone users. Then it packages that data and sells it to the highest bidder.

And now Google wants to get in the car.

If other automakers adopt Waymo for its self-driving fleets, Google will collect even more behavioral data on consumers. Driving patterns… temperature preferences… music preferences… how often we talk on the phone… if we are generally pleasant or angry… how much we weigh… Google will know it all.

Plus, there will be a big screen in the car where Google can serve us ads on our daily commute. That hasn’t been possible before. We should remember that we won’t have to watch the road anymore once cars are fully autonomous.

And since the average person spends nearly one hour per day in the car, Waymo’s technology will give Google an extra hour every day to serve ads and collect data. That’s Waymo’s (Google’s) real agenda.

The system that will make self-driving cars 99.9% safe…

We just got big news from MIT. Its computer science and artificial intelligence lab developed a new sensing system that allows cars to “see” through the ground below them. The system is called localizing ground-penetrating radar (LGPR). This is one of the last steps to making self-driving cars essentially 99.9% safe.

Existing self-driving technology addresses roughly 98% of all driving conditions. Cameras, ultrasonic sensors, radar, and LIDAR allow self-driving cars to position themselves in the right place on the road in nearly all weather and traffic conditions.

But existing tech doesn’t compensate for that last 2% of driving conditions, including heavy snow and fog. These are the conditions that make it hard for the car to “see” lane markers and road edges. That’s where LGPR comes in.

The LGPR system will sit underneath the bumper to create a real-time map of what’s beneath it. In this way, the car can “see” through snow and fog to ensure that it always stays on the road.

So this is a great development. And what’s especially interesting here is that we are now addressing some of the more outlying cases. In other words, the core development is done for autonomous driving… Now it is just a matter of solving the last 1–2% of difficult driving conditions.