Following up on our discussion of Twitter and politics yesterday, news broke from Twitter’s CEO, Jack Dorsey.

Dorsey announced via a series of tweets (of course) that Twitter will stop all political advertising on Twitter globally. The policy goes into effect on November 22.

For a subject as charged as politics – and considering the morass experienced during the last election – putting Twitter in the position of trying to be an arbiter of what is and isn’t true is an impossible position to win.

The Left quotes data from one agency… The Right does the same from another… And both seem like they are referring to the same issue. Both sound factual, but each side calls the other’s data misinformation.

The answer is in the details and assumptions made in collecting and deriving the data. But the media doesn’t spend much time understanding that.

Dorsey solved that problem by removing Twitter entirely from the process.

No more political ads on Twitter. Current estimates are that Twitter will lose between 2–5% of revenue over the next year. It is worth it.

In one simple move, Twitter set itself apart from social media platform Facebook… took concrete action on the one thing it received the most criticism for on Capitol Hill… and removed itself from a no-win situation. Well done.

Google search is about to get much better…

Google just made a major update to its search engine. This is the biggest upgrade in many years.

Google’s rolling out an update for its “Bert” system. Bert is an artificial intelligence system that Google uses as a key part of its search engine.

The new Bert will use natural language processing (a form of artificial intelligence) to deliver better results for natural language questions. And it does this by considering how the words in a search relate to each other.

I know that sounds like common sense. But historically Google has just focused on keywords in a sentence.

For example, if you searched “Where can I buy tickets to get from Nantucket to Boston?” Google would just focus on the keywords. Tickets. Nantucket. Boston. Then it would deliver general search results about airplane or ferry tickets… or maybe even tickets to a major event in Boston.

This leaves the consumer to sort through the results to determine what’s relevant and what’s not.

Bert is designed to fix that. It will provide more specific results because it will consider the context of the sentence and the relationship between each word. So that search for tickets from Nantucket to Boston will return results like one-way trips from one place to the other.

Here’s why we should care…

About 15% of daily searches on Google are brand new. Google hasn’t seen them before… so it doesn’t have data about which results are most relevant to the person conducting the search. That’s surprising, isn’t it?

Bert will help Google understand those searches better the first time they are asked. And that means better search results for Google’s users.

We should also know that this will directly impact search engine optimization (SEO). SEO is how companies get their websites and/or marketing promotions to appear higher in search results. That’s important because most people never go beyond the first page or two of search results.

So anyone doing online marketing should be paying close attention to this. As we know, when Google’s algorithm changes, it often requires changes to SEO strategy as well.

And as for the rest of us, we’re going to be enjoying even more relevant search results to our Google queries starting immediately.

Google is going after Fitbit…

Speaking of Google… word is out that it has made an offer to acquire health tracking company Fitbit. This tells us that Google sees a big opportunity in the health tracking business – specifically with regards to the smart watch.

So Apple has done with its watch the same thing it did with the iPhone – it upended an entire industry.

And that’s largely because the Apple Watch is not only a watch. It is a communication, information, and even health tracking device. It has received FDA approval for health monitoring.

It’s a fantastic product and continues to prove its incredible utility. Apple literally made the Dick Tracy-like watch phone calls a reality! 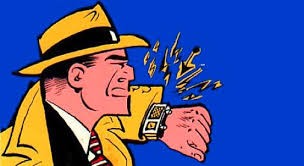 Today, Apple commands about 36% of the smart watch market. Fitbit is a distant fourth place with 5.5% market share. But Google is nowhere to be found…

Google wants to position itself to compete with Apple. We don’t know what its final offer for Fitbit is, but Google will be acquiring Fitbit at a fraction of the price Fitbit went public at. That’s because Fitbit has had a horrendous run…

Fitbit (FIT) went public at $20 per share in June 2015. The stock has plummeted to about $6 per share today. That’s roughly a 70% plunge. And that’s after a big surge. FIT was trading around $3 per share just a month ago.

At these levels, Fitbit is trading around a $1.5 billion valuation. It is likely Google’s offer will come in around there.

By the way, this is not the first time Google has used an acquisition to become competitive in an industry. That was how Google got into the mobile phone business also.

Google acquired Motorola’s mobile phone division, along with a lot of patents, back in 2012. Google used Motorola’s brand name and hardware as a way to demonstrate how its Android operating system (OS) software could be used to produce high-performance smartphones.

Google gives the Android software away for free to the industry, and in return, it collects behavioral data from each and every Android OS device in the world. It then packages and sells that data for advertising revenues.

And, of course, Google’s ultimate goal is to get its software on the Fitbit. That will make for a better consumer product… but it will also allow Google to collect a wealth of behavioral data that it’s not currently getting.

Then Google can turn around and sell our health data to insurance companies and other interested third parties. That’s largely an untapped market for Google today.

China is close to launching a state-backed digital currency…

We are starting to see robust support in China for blockchain technology and a state-backed digital currency. In fact, I believe we could see a digital currency version of the renminbi before the year-end…

Speaking at a recent Political Bureau of the Central Committee meeting, President Xi Jinping said China needs to “seize the opportunity” afforded by blockchain technology. He also said blockchain was an “important breakthrough for independent innovation.”

Not long after, a report published by the Cyberspace Administration of China detailed more than 500 enterprise applications of blockchain technology. And that was followed by an official at the People’s Bank of China encouraging commercial banks to increase investment in blockchain.

Clearly, the writing is on the wall. We are getting very close to the launch of China’s state-backed digital currency.

And the core digital infrastructure is already in place. It won’t be a huge jump. China will leverage the vast networks built by Alibaba, Tencent, and WeChat to make it happen.

This is something we need to be paying attention to. I’ve only seen the Chinese government talk about one other technology like it is talking about blockchain right now. And that’s artificial intelligence (AI).

China sees both AI and blockchain as areas of national competitiveness. The country, at a state level, is laser-focused on developing these technologies and fostering a regulatory environment that facilitates those goals.

And ironically, the U.S. is falling way behind on blockchain…

But we’re not getting it.

In fact, in a closed-door meeting I recently had in Washington, D.C., I was astounded by some comments I heard.

One person implied that there was the “possibility” of competitive disadvantage and capital flight within the next three to seven years as a result of current policies on blockchain.

Three to seven years? That’s absurd. It’s happening right now. We cannot be complacent about the power of this disruptive technology.

So I felt compelled to speak out. Here’s what I said to a room full of government officials, regulators, and industry insiders:

The Chinese government is working on launching a digital renminbi before the end of the year, and it is working in partnership with the private sector. The China equivalents of Amazon, Google, and Facebook are providing the digital infrastructure to issue this currency, providing the ability to launch in a matter of days or weeks, not years. We have a lack of urgency in the United States. Capital flight is not three years down the road – it started last year. Billions of dollars have been moving offshore that would have been invested here. We must have a sense of urgency.

I wish I could share more about the meeting, but it was held under Chatham House rules.

The spectrum of awareness is wide. Some believe that there is only a “possibility” of a threat. Others deeply share my sense of urgency to address the U.S. national stance on this revolutionary technology.