Van’s Note: Van Bryan here, Jeff Brown’s longtime managing editor. Over the past few weeks, we’ve been sharing insights from one of our colleagues, Jason Bodner.

Jason – as we learned yesterday – spent nearly two decades working on Wall Street. Jason was a partner and head of equity derivatives at Cantor Fitzgerald North America. During his career, Jason executed trades sometimes valued for hundreds of millions or even billions of dollars.

He used that experience to craft a “stock picking machine” that identifies big money flowing in and out of stocks.

Jason uses this proprietary algorithm to identify what he calls “outlier stocks” on the verge of sharp moves higher. And open recommendations in Jason’s model portfolio now show returns as high as 252%, 410%, and even 783%.

Today, I’ll ask Jason about these “outlier investments.” And I’ll ask him to share his strategy for finding them.

And be sure you watch Jeff and Jason’s newest investment presentation. They’re calling it The Outlier Investment Summit. Jeff and Jason will share an important announcement that will impact every reader of Brownstone Research. You can learn more here.

How I Discovered “Outlier” Stocks

Van Bryan: Jason, thanks for speaking with me again. Yesterday, we discussed your background working on Wall Street. But today, I’d like to ask you about the incredible success you’ve had finding “outlier stocks.”

Van: The first question is the obvious one. What is an “outlier stock?”

Jason: Well, let’s start with what an outlier is. In statistics, an outlier is an observation that differs wildly from others.

Most people’s eyes glaze over when I start talking about statistical analysis. But understanding this simple idea is key to making great investments. 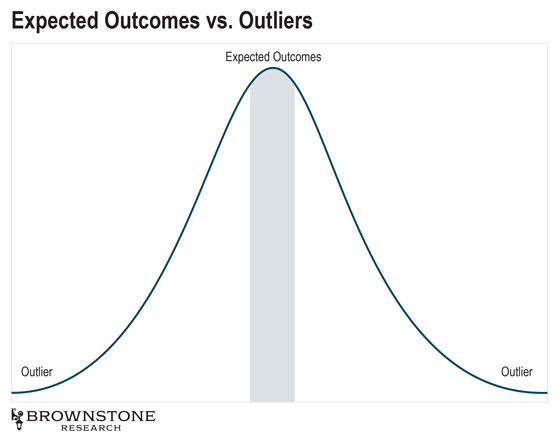 But imagine that there’s a man in your neighborhood who is eight feet tall. He would be way outside the curve, on the far right side.

If you plotted it on a scatter plot, he’d be far outside where the others appear. 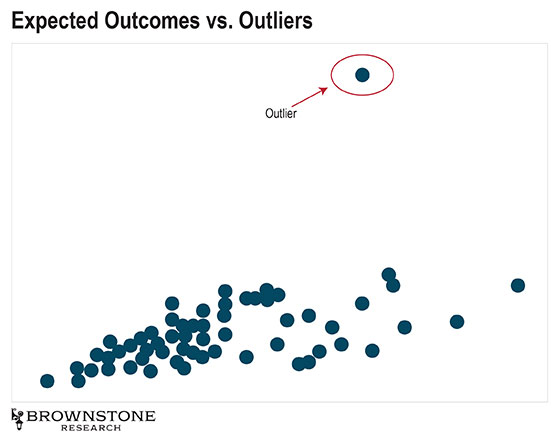 An eight foot tall man in a population of men with heights 5′5″ to 6′3″ would be an outlier.

So, an outlier is basically an occurrence that breaks all the rules. It’s just not the expectation.

Here’s an even better example…

Tom Brady is the quarterback for the Tampa Bay Buccaneers. He’s been to 10 of all 55 Super Bowls. He just won his seventh ring. Most people think, “That’s great for Tom.” And that’s as far as it goes.

But consider how significant that is…

Tom Brady has been to 18% of all Super Bowls ever held. And he’s won 13% of them. That is a statistical outlier. It breaks every rule of what we think should “normally” happen.

Tom Brady… Wayne Gretzky… Michael Jordan – all these men are outliers in their sports. They break all the rules for what we think should be “normal.” They are the best – head and shoulders above the rest… just like our eight foot tall neighbor! (laughs)

Van: And outliers exist in the stock market as well?

Jason: Absolutely. And realizing that changed my life.

Outlier stocks have returns that break all the rules. They perform exponentially better than all the “normal” stocks.

These stocks are Tom Brady. They are Wayne Gretzky or Michael Jordan.

One great example of an outlier stock is a company called The Trade Desk (TTD). It’s an advertising technology company. It applies a quantitative approach to digital advertising and tells advertisers the worth of each ad.

Compare that to the S&P 500 – what most people consider “the stock market.” The index is up close to 40% over the same time. 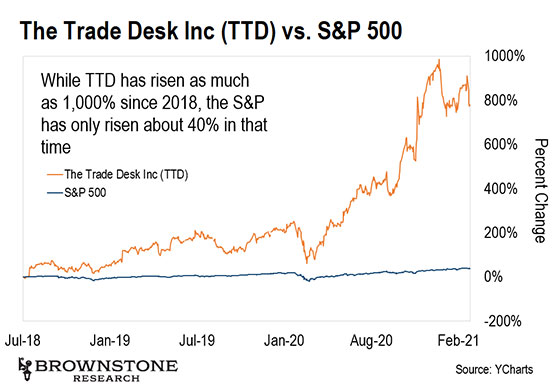 But the peak return from The Trade Desk wasn’t just “a little better” than the S&P. It’s 25 times the return of the S&P. It broke every rule about how we think a stock should perform.

And again, this isn’t some back-tested trade. It’s a live recommendation I made to my readers.

Van: Next obvious question: How do you find these outlier stocks?

Jason: Now we get to the fun stuff! For that, we have to go back to my days on Wall Street.

Remember, my job at Cantor Fitzgerald was to execute large trades for clients. And we’re talking “big boy” money here – tens or hundreds of millions of dollars. Occasionally, I’d even work on billion-dollar trades. Big money.

[Van’s Note: For readers who missed our first conversation with Jason on his time on Wall Street, catch up here.]

One day I had a client that came to me and said, “Jason, find me all trades worth €5 million or more.” And that was it.

I won’t get into details. But he was a tough client to work for. He really toughened me up in my early years.

But how was I supposed to find that information? Remember, this was around 2001. Technology wasn’t what it is today. Am I supposed to just wade through ticker tape for each of the 3,000+ stocks in Europe? That’s impossible.

So, I started to build an algorithm that could scan the market for me and deliver the data I wanted.

At the time, this system was just there to help me do my job. I had no idea that I’d discover what I did.

Van: What did you discover?

Jason: It’s a silly analogy, but imagine the stock market as a calm bay. In it, there are a bunch of minnows. Those are retail investors like you and me. Maybe there are some family offices or funds that are bigger fish.

But the big money investors I traded for? They were whales. And their movement changes the entire ecosystem. When they buy, we need to pay attention.

Like I mentioned before, it’s simply supply and demand. The supply of stock stays constant. But when big money injects hundreds of millions or billions of dollars into a stock, it can only go one way: up.

What I discovered was that through all the flashing ticker tape and constant chaos of a trading day, there was this hidden but predictable phenomenon. It practically required the stock to jump higher.

And that was the beginning of my “enlightenment.”

Van: And you saw this firsthand? You saw stocks move higher on this big money buying?

Jason: I didn’t just see it. I caused it! My trades were literally moving the market.

I’ll give you an example…

He had this client that wanted to take a position in a troubled retail stock. Out of respect for my past clients, I won’t name who the investor was. But it’s a famous investor that I’m certain readers know.

My friend tells me he wants to buy 100,000 shares of this stock (about $2 million worth) on behalf of this investor. No problem. I find the stock and he buys it instantly.

And right away he asks me, “Do you have any more?”

Again, not a problem. By the end of the day, I sold him about $20 million worth of the stock.

It felt good to broker such a big deal. But then I get a call the next day. It’s my friend again. “Jason, do you have any more of that stock to sell?”

So I find it, and I sell him another million shares.

All told, I sold him about 20 million shares, or about $600 million worth.

And by now, the stock was clearly moving. It was up as much as 70% in about a month.

I later learned who the buyer was. A $20 billion hedge fund acquired more than 15% of this stock through me and my competitors.

And the stock didn’t climb because anything had changed at the company. It was moving higher for one reason: I was buying more than was available. My buying was lifting it.

Like I said, this was an “apple on the head” moment. I realized that this big money buying was causing the stock to move higher. And my trade was just one of many…

Van: So that’s what makes an outlier stock? It has large order flow?

Jason: That’s a big part of it, but that’s not enough. I needed more certainty.

Here’s the thing: that company in the story turned out to be a terrible investment. It had awful fundamentals, earnings had fallen off a cliff, and the company was up to its ears in debt. Sales were going straight down, too.

That big money buying shot the stock up about 70% in a few weeks. But right after that huge run-up, I watched the stock fall 90% over the next year or so.

Call me old-fashioned, but I like owning great companies. I think our readers do too.

So this big money buying is a crucial part of it, but that alone doesn’t make an outlier stock.

An outlier is when big money is buying the best quality stocks.

That’s what The Trade Desk was. It had great sales and earnings, big profits, and big money was itching to own it.

So it was a no-brainer to add it to the model portfolio for my readers. And it’s not alone.

On and on it goes. Now, these stocks are currently above the recommended buy-up-to prices, but they illustrate the potential of these outliers.

Again, these are not back tests. These are real outlier recommendations that I’ve made. And they’re not accidents.

These outlier investments are great stocks that the big money is pushing higher.

And the best part?

Investing in great stocks alongside big money is predictable, repeatable, and incredibly profitable.

And I can prove it, because I’ve spent nearly two decades building a “machine” that finds these stocks. And I find them practically every day.

Van’s Note: Check your inbox tomorrow for our final installment with Jason Bodner. I’ll ask him to tell us about this “stock picking machine” that spots these outlier investments. And I’ll also ask him which stocks his system is flashing as “buys” right now.

And if readers would like to get started with these outlier stocks now, then I encourage you to go right here. That’s where you’ll find Jason and Jeff’s newest investment presentation.

During The Outlier Investment Summit, Jeff and Jason will make an announcement that will impact all Brownstone Research readers. Again, go right here.