It’s frustrating for those who don’t hit those crazy paydays. We all want unbelievable returns in as little time as possible. I’m no different than you…

But there’s a reason we call claims like this “crazy.”

Those returns are great, but 30 years? C’mon! When it comes to stocks, few are that patient.

The hard truth is we don’t always want what’s good for us. It’s like going to the gym – I feel great after exercise, but I never want to go to the gym. I want all the returns and none of the work.

And I certainly don’t want to do it every day for 30 years. But I know it’s good for me and will help me when I’m old(er).

Investing is the same.

But what if we could book monster gains… and not wait several decades for it?

Of course, we’ve heard of speculative options winners or the rare cryptocurrency overnight jackpot. Those would be awesome to hit, but it’s really hard to do predictably.

But there is a real way to book big gains in as little as a couple of days… No need to wait a third of your life to get there. It’s also far more predictable.

I’m Jason Bodner, the editor of Outlier Investor. What I do is simple: I cast a huge net into the ocean of stocks. I analyze thousands of them. My computers rank them daily from strongest to weakest.

I look for technical strength and fundamental power. I also look for Big Money investors buying stocks. When they buy the best ones, I have a potential outlier on my hands.

And outliers exist in the stock market too. It has been my mission to find them since 2001.

Finding outliers is how I built and continue to build my wealth. That’s my secret to making monster one-day gains: outlier stocks.

Here’s the trade-off… Once I find a potential outlier stock, I grab it and generally never let go. Of course, aside from Warren Buffett, most people don’t share my holding time of “forever.” But that’s how you can reliably make thousands of percent.

The trade-off is time. Just like investing in the S&P 500 would have given you a 10X on your money in 30 years, the longer you invest in an outlier, generally, the better you do.

Of course, you can sell an outlier after a big gain.

But I’ve found that patience pays off. And it certainly paid off big time for my followers this week…

Holding on to a Winner

On July 27, 2018, I told readers of my research service to buy a little-known stock called The Trade Desk (TTD). It was a small company disrupting the digital advertising space. It was only worth $3.8 billion at the time. I wrote:

What we have here is a company that executes and over-delivers. It’s a small, growing player disrupting an industry. It has low debt and massive growth. It’s small compared to its peers, which means that it can be snapped up at any time. These are the setups I love…

We added it to the portfolio at $89.50. By September, the stock had risen to $150. I could have told everyone to sell for a fat 68% gain in mere months. It was tempting… But I believed it was a true outlier and worth holding on to.

Readers were mad, but I was resolute: I was sure it was going up.

Readers were mad again: “Why didn’t you take profits?!”

But once more, I told them to hold… We just needed to give this outlier more time.

And as we’ve seen over the past year, I was right. TTD hit its lows in March and took off running. As of Monday, November 8, we were up 666%.

Most readers would probably be more than satisfied with that kind of gain. Surely, most of the stock’s upside was gone, right?

But I encouraged my followers to be patient… and this week, we’ve seen exactly why…

Big Moves in a Short Time

This week, TTD reported blowout earnings. It beat earnings expectations by 20% and blew away sales estimates too.

Compare the size of that move to our $8.95 entry price… 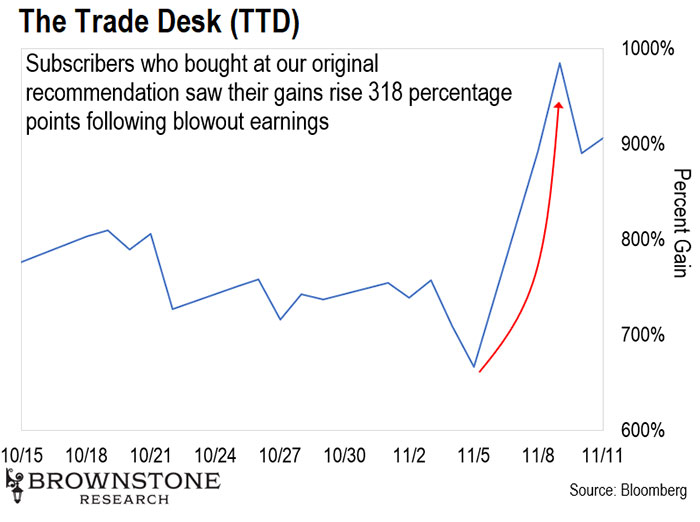 The downside is we had to wait a little: three years and four months. But that’s honestly a short time in the stock world.

TTD did it in about one-tenth of the time.

But if we hold another few years, imagine how much higher TTD could go. That’s the power of outlier companies.

Outliers hold the key to beating the market. TTD is a real, prime example.

And despite their grumbles in the past, my readers are thanking me for it too.

TTD isn’t the only outlier I’ve found either. I’m regularly hunting for the latest ones to pop up on my radar. And if you want to learn more about my latest recommendations… and how I uncover these stocks… you can find out more right here.