2020 didn’t go how any of us expected… with a global pandemic upsetting normal life and causing a stock market crash last March… which was followed by political and social turmoil over the following months.

As a result, there’s been a lot of uncertainty about how this year will go.

So many people might be surprised to hear that I’m very optimistic about the future.

2021 is the beginning of a decade that will bring more technological advancements than we have seen in the last 50 years.

We’re going to see manned missions to the Moon and Mars… and even the beginning of permanent settlements in space.

And we’ll cure cancer and so many other horrible diseases that have no known cures today.

I could go on and on, but the key point is that we have a lot to look forward to.

And we will certainly see some of the best investment opportunities of our lifetimes. Why am I so confident?

Something extraordinary has changed during the last decade. And very few investors know about it.

The pace of technological innovation and new company creation is one we have never seen before. Yet opportunities for investors to get in early on the technology companies that will be the next Amazon or Google have all but disappeared.

Put simply, the way that private companies raise capital, as well as how and when they go public, has completely changed.

Retail investors rarely have the chance these days to invest in early stage companies. I’m talking about firms at the beginning of becoming multibillion-dollar companies.

In the ’90s and 2000s, it was common to go public if a company was generating $50 million a year in revenue and preferably at cash flow break-even. Take Amazon, for example.

Amazon went public on May 15, 1997. At the time, its enterprise valuation was $438 million. It generated $147.8 million in revenue that year and a mere $2.7 million in free cash flow the following year. 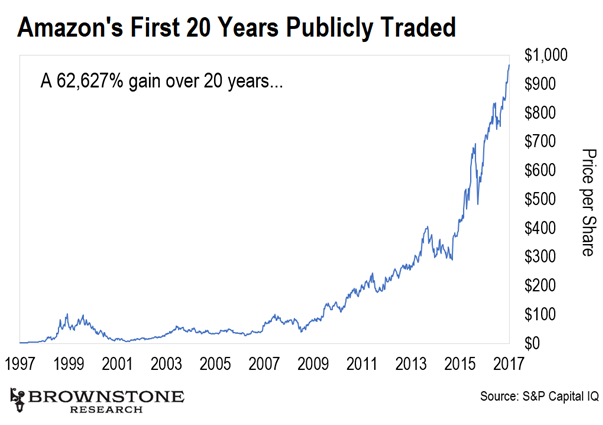 And today, the stock trades even higher at over $3,000 per share.

The best part? Any investor could have taken part in these gains. All you needed to do was buy shares in Amazon.

But today, the best technology companies are staying private for longer. That means average investors don’t have a chance to stake a claim in some of the world’s best tech stocks.

But I believe that is all changing…

The IPO market is hot right now. Last year, we saw 552 initial public offerings. And those IPOs raised more than $172 billion. That was true even with the pandemic going on… 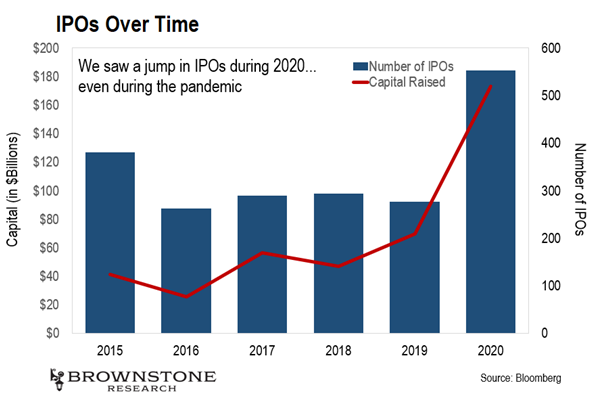 And I predict we’ll see this trend continue in 2021…

Why? For the last decade, record amounts of venture capital and private equity have been invested in the technology sector.

There has been so much money invested that there really wasn’t a need for these technology companies to go public. They were able to stay private for years longer than what used to be normal.

But the time is up.

All that private capital has had its money tied up for more than a decade in many cases. And they are asking for an exit so that they can get a return on their invested capital.

That’s why the floodgates are opening. And more and more companies are finally looking to go public.

That means investors will have an opportunity to invest in these bleeding-edge companies for the first time ever.

But if you’re looking to make serious money in 2021, there’s one small group of these stocks you need to pay special attention to.

That’s because, thanks to a powerful government agency, a group of little-known technology stocks have a preset “timer” attached to their share price. And once their “timers” hit zero, the share prices can explode higher in a matter of weeks… or even days.

I call these “Timed Stocks,” and they are the best way I know for investors to potentially make a small fortune in 2021. And even more exciting, thanks to two forces, the profits from these stocks are getting bigger… and they’re happening faster than ever before.

That’s why, tonight at 8 p.m. ET, I’m hosting a special event to tell you all about it. We’re calling it Timed Stocks: Final Countdown.

I’ll reveal what “Timed Stocks” are, how you can identify them, and the best way to start profiting from them today.

Please go right here to reserve your spot to attend.

I look forward to seeing you there!