Our Timed Stocks: Final Countdown event will kick off at 8 p.m. ET this evening. If you haven’t yet, I encourage you to go right here to reserve your spot.

That’s because, at tonight’s event, I’m going to pull back the curtain on my system for trading “Timed Stocks.”

These stocks go public with a “timer” attached to their share prices thanks to a government mandate. When the timer hits zero, these stocks can climb hundreds of percent in a matter of days and sometimes hours.

We are talking about a tiny universe of publicly traded stocks that can generate incredible returns for everyday investors.

On average, my system has delivered 185.6% in realized returns with an average holding period of 254 days per position. That’s nearly tripling our money in less than a year… even with the disruption caused by COVID-19 for the past 12 months.

And here’s the best part – these are small companies that very few people know about.

Wall Street isn’t on their trail yet. They are often too small for hedge funds to get into. And most retail investors don’t know they exist. Yet we can buy and sell these stocks with just a few clicks in our brokerage account. It’s simple.

I’ve spent more than five years crafting and refining this proprietary system. And I am excited to give viewers the inside scoop on it tonight.

At our event, I will reveal what “Timed Stocks” are, why they explode when their timers go off, and how you can add them to your portfolio today.

Our next timer could go off as soon as March 24. That’s why I encourage everyone to make sure they have their spot reserved. Please go right here to do so.

I’ll share all these details and more at 8 p.m. ET tonight. I hope to see you there.

PayPal is expanding its plans for cryptocurrencies…

Financial technology (fintech) giant PayPal just made an interesting acquisition that gives us insight into the strategic direction of the company.

It just acquired an early stage company called Curv in a nine-figure deal. We don’t know exactly what the purchase price was, but it was in the $100-200 million range.

PayPal did not have much to say about this move. But if we look at Curv’s technology, it is easy to see the direction PayPal is going with this strategic deal.

Curv specializes in cryptocurrency custody solutions. Its technology enables users to securely hold their cryptocurrency in an account that has some safety nets in place.

For perspective, many cryptocurrency wallets do not provide custody services. These “self-custody” wallets are perfectly functional, and they do not store any of the user’s personal information. That’s an attractive feature for some cryptocurrency users.

But the downside is that the cryptocurrencies in these wallets can be “lost” if a user loses the password. Because the wallet does not provide custody services, there is no one to access the funds. And there is no “reset password” feature. The funds are lost if the password is lost.

That’s not the case with Curv. It can reset passwords just like the online accounts we are accustomed to. And it also has other safeguards in place to keep funds secure. These types of safety nets are important for onboarding new cryptocurrency users who are not comfortable with the technology.

So this move suggests that PayPal plans to expand its cryptocurrency operations in a big way.

As a reminder, PayPal was late to the game. It only provided its customers the ability to buy and sell cryptocurrencies like bitcoin back in November. PayPal is years behind Square, which first enabled its Cash App users to buy bitcoin in 2017.

What’s more, PayPal’s cryptocurrency platform is a walled garden. As it stands, users can only buy and sell digital assets. They cannot send them to another wallet.

Put another way, cryptocurrencies bought through PayPal are “stuck.” That’s not the case with the Cash App, which allows users to send their digital assets to any other wallet without restrictions.

The acquisition of Curv will change this dynamic.

Curv’s technology will allow PayPal customers to send their cryptocurrencies to other wallets as they please. And this will enable peer-to-peer transactions similar to those happening on PayPal’s Venmo platform.

So we can see that PayPal is setting itself up to compete with Square in the digital asset space here. This will be an interesting story to follow in the coming months.

The case is closed on NVIDIA’s cryptocurrency mining lawsuit…

A legal case in the tech industry that I have been watching closely has finally come to a conclusion. It was a lawsuit against NVIDIA initiated back in 2018, and it was an interesting case that I’ve been tracking from day one.

If we think back to late 2017, there was a mania happening in the cryptocurrency space. It was the first time that many people had heard about the asset class, and retail investors were pouring into the space.

This led some investors to speculate that NVIDIA was making a ton of money by selling GPUs for cryptocurrency mining. And shares of NVIDIA soared during this time.

However, NVIDIA downplayed this claim, saying that cryptocurrency mining was not having an outsized impact on the business. The company suggested that most of its GPUs were being used for gaming applications and artificial intelligence.

And then came the fourth quarter of 2018. That’s when the Federal Reserve began aggressively raising interest rates, which caused the equity markets to crash.

The Nasdaq ultimately pulled back 24%, bottoming on Christmas Eve. And NVIDIA plummeted 56% in this same time frame. That’s what prompted the lawsuit.

Some law firms out there specialize in going after companies when their share prices fall. They typically blame management for the stock going down, often claiming that management misled investors about one thing or another. Then they try to drum up support from investors who lost money in the stock.

And that’s exactly what happened to NVIDIA. The lawsuit claimed that the company misled investors by downplaying the impact cryptocurrency mining had on its business. The lawyers implied that this caused investors to lose money.

To me, this is nothing more than ambulance chasing.

The lawsuit has managed to muddle along for more than two years. But I’m happy to say that the judge finally dismissed the suit completely.

There was no evidence of misleading statements. The plaintiffs couldn’t even prove that cryptocurrency mining was responsible for a material portion of NVIDIA’s revenues. This made it clear that the lawyers and investors did not understand NVIDIA’s business model.

And here’s the ironic part – NVIDIA has skyrocketed over the last two years. The share price is now up 81% from NVIDIA’s October 2018 high, right before the big pullback that prompted this lawsuit.

Had these investors simply held their shares and kept a cool head, they would have seen the correction for what it was – a massive buying opportunity.

I recommended NVIDIA (NVDA) in The Near Future Report on January 8, 2019 – right as the dust was settling from the market crash. We are now up over 280% on that recommendation. Subscribers have nearly quadrupled their money.

So the takeaway here is that we shouldn’t fret when we see these law firms trying to drum up a class action lawsuit against one of our portfolio companies.

We certainly need to analyze the situation when that happens, but most of the time these suits are just a distraction. There’s rarely any substance to them.

An otherworldly meteorite has been discovered here on Earth…

We’ll wrap up today with a fascinating development. An unusual and rare meteorite was just found way out in the desert sands of Algeria. Here it is: 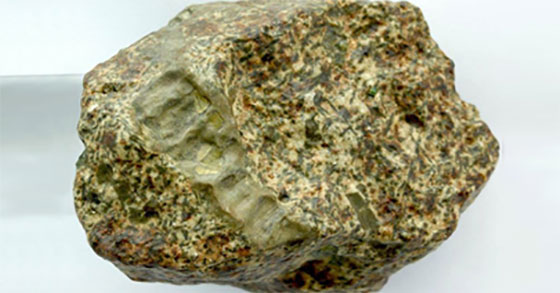 Scientists have classified the meteorite as an achondrite, which is a stony meteorite composed of rare volcanic material. And the team’s analysis shows that this is the oldest magmatic rock ever to be discovered on Earth.

That means this rock is in fact older than the Earth itself. How’s that for mind-blowing?

And it gets even more interesting.

As it turns out, this meteorite was ejected from an early protoplanet in our solar system. This is a planet that was beginning to form. It had gotten to the volcanic stage, which is the third of the four stages of planetary formation.

But for some reason, the protoplanet never made it to the surface evolution stage. That’s where atmospheric movements, tectonic shifts, and rain gradually transform the planet’s surface.

Here’s a rendering of what a protoplanet in the volcanic stage looks like: 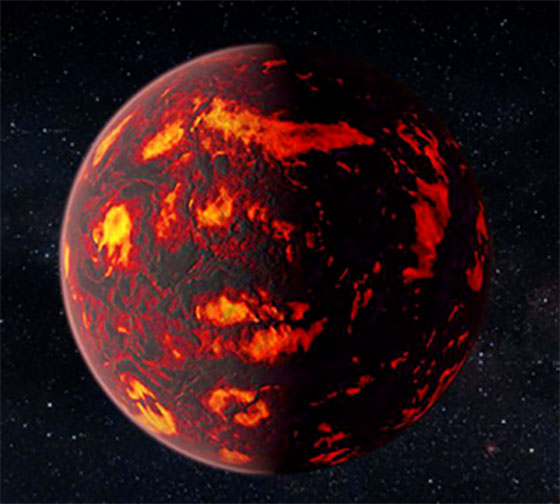 At some point, this meteorite was ejected from such a protoplanet. It must have drifted through space for 100 million years or more before ultimately finding its way to Earth.

Scientists are now studying the meteorite to see if it provides any clues as to what these early protoplanets were made of. It’s possible that they will discover new minerals that we weren’t aware of before. That’s an exciting prospect.

We haven’t talked much about asteroid mining in these pages, but it’s coming. Eventually we will start to mine asteroids for materials that can be used at human outposts on the Moon, Mars, and beyond.

Could it be that there are interesting minerals out there that could serve useful purposes we don’t know about yet?

As far-out as this may sound, we should keep in mind that the next manned mission to the Moon is scheduled for 2024. That’s just three years out. And SpaceX plans to send its first supply mission to Mars in the 2024–2025 time frame as well.

The age of space exploration is upon us. And this meteorite may give us insights into what the far reaches of our solar system are made of. That will aid us as we gradually become an interplanetary species.