Today, we’re bringing a brand-new essay from the newest addition to the Brownstone team, Jason Bodner.

In today’s piece, Jason dissects the fallout from the Archegos fund blowup from earlier this week. Many everyday investors were affected by this event, and it’s important to understand what this means if you were.

Before you read on, I want to quickly bring another important event to your attention – one that could have a much more positive but equally dramatic impact on your wealth.

Some readers have heard Jeff use this term recently. It describes the moment when an entire industry goes from analog to digital.

And after being held back by red tape for years, one industry is finally going digital… and creating a massive opportunity for early investors to profit.

It could be the last digital leap we see. And that’s why Jeff wants all readers to be prepared. So please go right here to make sure your spot is reserved.

Now, read on to hear how Jason responded to the Archegos blowup… and how you should respond whenever something similar happens in the future.

If you’re wondering what caused a big downturn in a small group of great stocks last week… I have a story to tell.

In short: A massive fund blew up and left a smoldering crater in some high-flying stocks. Some of which I personally own… or recommended to my readers.

The demise of Archegos Capital Management was spectacular. This huge fund that few have ever heard of is suddenly front and center – and for all the wrong reasons.

Facing margin calls, its positions were liquidated for billions in losses. Its holdings were sold en masse in huge block trades, causing some of the stocks to drop 25% or even more in a single day.

Some say the worst is over. Others fear it could take down the market.

What you should know about this blowup is that it’s happened many times before, and it will likely happen many times in the future. The truth is it’s been happening for decades. And as long as irresponsible funds keep abusing the leverage offered by their banks, it’ll keep happening.

In the fallout of these blowups, it’s hard to see how these punished stocks could ever recover.

But in this essay, I’ll prove to you that these stomach-churning events are buying opportunities – not reasons to fear. Let me tell you why you shouldn’t listen to the talking heads – and where you should really put your focus as an investor.

But before I do that, it’s important to understand what exactly happened with Archegos… and why it unfairly punished great stocks

Like many before him, Archegos fund manager Bill Hwang used excessive leverage. This means that he borrowed funds to try to juice his holdings’ returns. Of course, this equally amplified the downside exposure too.

So when the stocks started to fall – even a relatively small amount – big banks such as Goldman Sachs, Nomura, and Credit Suisse all gave him a margin call he couldn’t meet.

Why not? Because, along with leverage, he used derivatives to simultaneously increase and hide his exposure to stocks.

Many on Wall Street speculate he used something called a Contract for Difference (CFD). It’s a contract known as a swap, and it works like this…

Let’s say a fund wants to buy more stock than it has money for. It calls up an investment bank and does a swap trade. It pledges initial collateral on some percentage – let’s say 10% for this example. So the fund pledges $1 million to buy $10 million of stock.

It sounds pretty great! That is, until we look at it the other way…

If the stock falls 1%, the bank calls the fund and says, “Please deposit $100,000 into your account to meet maintenance margin.” To you and me, that’s a lot of money. But it’s peanuts to a large fund. The fund wires the cash, and all is fine.

Now, if the stock falls 10%… the initial collateral is wiped out, requiring new initial margin to be pledged – another million bucks. And if it falls even further, the fund must hastily deposit even more money… perhaps more than it has.

If it can’t meet that margin call, the bank forces a sell on any or all open positions and liquidates whatever is necessary to reclaim the bank’s capital at risk.

That’s what happened last week. Banks got nervous when Archegos couldn’t meet its margin calls. A mad dash for the exits by the banks ensued, and a supposed $20 billion of stock hit the market for sale.

And the worst part of this collapse is some great stocks got caught up in the crossfire. Even some I recently recommended or bought myself.

That might hurt in the short term. But I’m not worried…

Archegos’ Loss Is Your Gain

When volatility hits markets, especially as the result of forced liquidations, I like having cash ready to take advantage of the opportunity.

Archegos owned some great stocks, but when forced to sell, there’s no choice: stocks get blown out at unbelievably low prices. In fact, I took advantage of Archegos’ liquidation and scooped up some great stocks at distressed prices last Friday.

Archegos used huge, potentially one-directional leverage. The fund bought more stock than it should have to gain more exposure than it could handle if things went sour. Things did go sour.

The Outlier Investor strategy is simple at its core: find and own outlier stocks for the long term. These are the highest-quality stocks that Big Money is buying. (Big Money is what I call the biggest institutions and funds on the planet.)

Now that doesn’t mean I’m immune to volatility. But smart investors use volatility as an opportunity to own these outlier stocks at a discount.

These may take some time to prove out: perhaps days, weeks, months – or even not at all.

But history is on our side… 30-plus years of data and decades of experience say that buying great stocks on pullbacks can be a very fruitful strategy.

And some monster blowups of the past prove my point…

From 1994 to 1998, it crushed the market, raising $1 billion-plus of investor capital. Its strategy was arbitrage – or taking advantage of temporary fluctuations in markets. The fund said there was theoretically zero risk.

But the unthinkable happened in 1998. Russia defaulted on its bonds and rocked the market. The fund – with its massive exposure to markets all over the world – nearly collapsed the entire global financial system.

That’s because, once again, LTCM was highly leveraged. To the point that LTCM was so ingrained in global finance, it had to be bailed out by Wall Street banks in order to prevent contagion. If LTCM went bust, a global financial crisis would have ensued.

That sounds horrible for stocks. But if you had focused on outliers, you would have been fine.

Again, outliers are stocks with growing sales and earnings being bought by Big Money. To an outlier, the threat of a global financial meltdown is like an annoying fly.

Look at Home Depot (HD), for example (a stock I personally own). This stock had everything going for it, and it was constantly appearing on my Top 20 Buy report (back-tested data in gray). It had great sales and earnings, and Big Money loved it.

Because of this, Home Depot essentially laughed off 1998’s nuclear equity markets. The stock nearly doubled in 1998. And it has risen 4,347% from the first time it showed up on my radar… 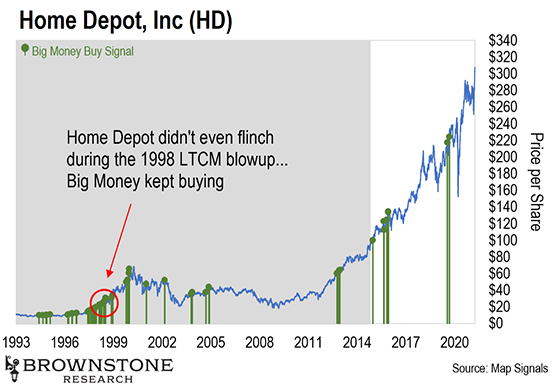 His hedge fund wasn’t even really a fund – it was a Ponzi scheme. After decades of literally unbelievable returns, it went nuclear. One day in 2008, he admitted to his sons – who also worked for him – that his asset management business was a fraud. It was a massive $65 billion lie.

The Madoff blowup was simultaneously a result of, and an accelerant to, the Great Financial Crisis in 2008. His fund’s failure rocked the market even harder, putting heavier pressure on even the best stocks, including outliers.

But outliers lived on, and they even vaulted higher and faster after the tumult.

Back then, Starbucks (SBUX), another stock I own, wasn’t yet the monster it is now. But it had phenomenal sales, amazing earnings growth, and giant profits. It seemed like it was opening new stores every other day.

And Big Money noticed, too. In 2006, there was a ton of Big Money buying and appearances on my Top 20 Buy report (back-tested data in gray).

Similar to Archegos pressuring great stocks today, SBUX also fell under pressure from the Madoff scandal and the financial crisis.

But it fought through and went on to phenomenal heights – because it had all the right outlier traits. SBUX rose a mouthwatering 1,181% since it first showed up on my back-tested Top 20 Buy report. 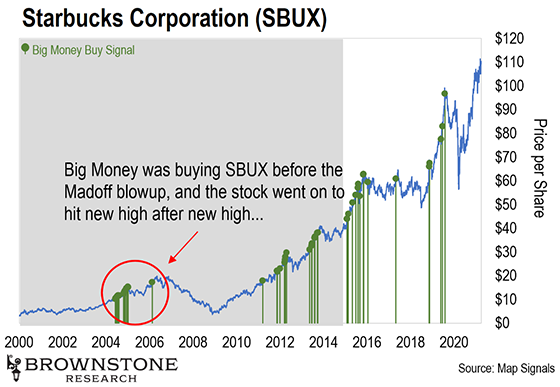 Here’s the bottom line: Archegos wasn’t the first massive hedge fund failure, and it certainly won’t be the last.

It pounded a bunch of high-quality Chinese and tech stocks. The uninformed got shaken out of those shares – some potential outliers.

Those hasty investors will likely regret that in the years to come. That’s because history shows outliers are impervious to noise that has nothing to do with them.

Remember, Professor Hendrik Bessembinder proved that, over 100 years, only 4% of stocks accounted for 100% of the gains above Treasurys. If you had invested in 96% of stocks during this time, you would have been better off in bonds.

And it doesn’t stop there: just 1% of all stocks accounted for 50% of the gains above Treasurys.

This tiny sliver of the stock market universe represents the outliers – the stocks I put all my energy into finding. The best ones you can buy.

So the next time you’re watching a high-quality stock tank on the back of some irresponsible money management, take a moment before you act.

Take a deep breath. Ask yourself if the downside reflects some massive change in the underlying business, or if it’s just a repeat of historical Wall Street antics.

Hopefully, now you have your answer.

P.S. There’s a beautiful simplicity in my strategy. When you identify the qualities that make stocks long-term winners, you learn never to panic about hedge fund blowups… Fed-induced market disruptions… or any of the noise that the mainstream financial media likes to blare in our ears.

It’s about having conviction in companies that are easy to love – and following the Big Money that propels these companies toward future success.

Every two weeks, I recommend companies just like this to subscribers of my investment advisory, Outlier Investor. It’s how we’re able to find stocks that rise as much as 1,000% in just a couple years… and often double in less than one year.

This strategy has never steered me wrong. And I honestly don’t suspect it ever will. Because there’s nothing more reliable than following the Big Money.