If someone were to mention neon gas, an image of a bright lettered neon sign would probably come to mind.

Yet there’s a far more important application for the noble gas… semiconductor production.

The media has recently made a big fuss about neon gas and how there will be a shortage caused by the crisis in Ukraine.

The underlying problem is that between 45–54% of the world’s neon gas used for semiconductor manufacturing has been made by two Ukrainian companies – Ingas and Cryoin. And of course, those plants have been shut down due to the war… hence the panic.

In a world where the media tends to feed or even cause panic, simple explanations are preferred… like, “Putin bad, Ukraine good.” As usual, there is a lot more history and context to the story that is critically important to understand in order to have a balanced view.

The same is true in this case.

Neon gas is a byproduct of steelmaking, and it is further refined to 99.99% purity in order to be used to produce semiconductors. It is used in the lithography process which transfers a semiconductor circuit design to a substrate, like a silicon wafer, which we discussed recently in The Bleeding Edge.

The nuance that has been missed is that neon is only used in deep ultraviolet (DUV) machines, not in the bleeding-edge, extreme ultraviolet (EUV) machines that are necessary to manufacture the most advanced semiconductors for smartphones, computing systems, and artificial intelligence applications.

The more obvious and important detail is that neon gas is a byproduct of steelmaking, which means there are several countries around the world capable of increasing the production of neon. China, India, South Korea, the United States, and even Japan come to mind.

And there are industrial gas companies like Air Products (APD) and Linde (LIN) that have stockpiled and are capable of producing more of the gas.

So while it may take some time (a few months) and effort to scale up production of neon gas at the purity required for some forms of semiconductor production, there are enough stockpiles of neon to keep the industry running.

And for the most advanced semiconductor production using EUV technology, neon gas is not required at all. [For more on EUV technology, and my recommendation on how to profit off the next wave of this technology, click here.]

The far bigger issues related to the chip shortages will continue to be the sheer manufacturing capacity for mature semiconductor manufacturing processes and the availability of silicon wafers for production.

The industry is scrambling to build more manufacturing capacity online to catch up with overall demand.

On a related but very different topic… what should be getting a lot more coverage in the media right now is the potential for a global food shortage as a result of the crisis in eastern Europe. Neon gas shouldn’t be our concern… food production and fertilizer should be.

We’ll have a look at that tomorrow in The Bleeding Edge.

FreedomFi is starting to get traction…

One of our favorite projects, FreedomFi, just raised $9.5 million in its Series A round. This is a positive step forward in making a crowdsourced 5G wireless network a reality.

As a reminder, FreedomFi is partnering with blockchain company Helium to enable a crowdsourced 5G network. This sounds almost impossible, but with the right economic incentives in place, there is a chance to have a citizen-built and managed network capable of functional network coverage.

In theory, this network will compete directly with the wireless networks established by AT&T, Verizon, and T-Mobile. We can think of it as the “Web 3.0” model – a decentralized network with monetary incentives.

For its part, FreedomFi has access to the spectrum needed to run a wireless network. And it is specifying the hardware, like small cells and gateways, and develops the software necessary to implement a decentralized 5G network.

Anyone will be able to buy these small cells and run the software to create their own 5G network locally. The more people who do this, the larger the overall network becomes.

And that’s where Helium comes in.

Helium developed a blockchain-based system that pays people to purchase and run these gateways and small cells. Anyone who runs their own cell will receive compensation in the form of Helium’s HNT token.

As I write, one HNT is worth $23.65. And it’s completely fungible. Holders can convert HNT into Ethereum (ETH) at will. And of course, they can sell the ETH for U.S. dollars.

This alone is a great incentive for people to set up their own devices and help power FreedomFi’s 5G network.

There are some interesting incentives in place that might just make this successful. Large wireless carriers spend about $28,000 to install a small cell for their 5G wireless networks. Obviously, that’s out of reach for almost everyone.

But today, FreedomFi has designed 5G network hardware that costs around $2,500 for a combined gateway and small cell. That’s already about 90% less than what the large carriers are spending.

And FreedomFi is working towards getting the price down to $500 per installation. At that point, it becomes affordable for most to purchase and “turn on” a gateway and a small cell device to contribute to the network… especially considering everyone will receive HNT each month for participating.

As an example, my bill with Verizon costs around $270 every month. That’s for four phones and a wireless iPad. Wireless bills are expensive every month, but here’s the thing, most of the time when we use our smartphones, they are connected to a Wi-Fi network, which means that we aren’t using data traffic on the wireless network. The prices just don’t make any sense.

So if the costs to set up a FreedomFi/Helium network dropped to around $500, that’s less than two months of wireless bills, plus the user would be paid to run the network through Helium’s native cryptocurrency, HNT.

This is where the economic incentives really start to make sense.

For the sake of newer readers, NFTs are a brand-new class of digital assets. In their simplest format, they are a form of digital art and collectibles… But NFTs don’t stop there.

NFTs can have creative attributes and perks. We just saw this when popular band Kings of Leon launched the first-ever NFT album.

Bringing NFTs to Instagram is a smart move by Facebook. The company is building out its own payment ecosystem. This is Facebook’s workaround for its failed Diem project.

If we remember, Diem was Facebook’s ambitious stablecoin project. At first, it looked like Facebook wanted its stablecoin to be a global reserve currency. That’s because a basket of national fiat currencies was going to back the coin.

But that plan received major regulatory pushback around the world. And its second attempt with just a U.S. dollar backing had a similar reception… it felt like Facebook was planning to compete with the Federal Reserve for “owning” the digital U.S. dollar.

As a result, Facebook had to abandon the project. Facebook sold Diem to Silvergate Capital last month.

Now, by bringing NFTs to Instagram, Facebook is creating its own payment ecosystem – just like it tried to do with Diem but in a much less threatening way.

Because of that, Facebook likely won’t get such strong regulatory pushback. After all, to an unassuming and uninformed policymaker or politician, NFTs appear to be little more than pixels on a screen.

And that’s how Facebook wants NFTs to be perceived. But behind the scenes, Facebook will be implementing support for NFTs in a series of calculated steps…

From there Facebook will create a marketplace where users can buy, sell, and trade NFTs with one another. It appears this will start with Instagram as well.

Instagram, Facebook, and WhatsApp are built on the same tech stack. This means if Instagram has NFT functionality… so do Facebook and WhatsApp. It would be a relatively each tech adjustment to expand NFTs to Facebook’s suite of social media applications.

And think about this – Facebook has nearly 3.6 billion MAUs in its ecosystem. That’s 45% of the Earth’s population.

So Facebook’s push into NFTs is much bigger than the company is letting on. And it has the potential to kick the NFT trend into hyperdrive. This is very bullish for the space.

And it’s why I continue to help my readers invest in the most promising projects involving NFTs and blockchain technology more broadly… To learn more about my top recommendations, please go right here for the latest.

Regular readers may remember the James Webb Space Telescope (JWST). We talked last month about its successful deployment at Lagrangian point 2 (L2) which is located about 1.5 million kilometers from Earth

L2 as a location is an incredible location for a telescope because it “hides” behind the Earth opposite the Sun. It is a gravitationally stable location that effectively shields the telescope from the sun. This improves the performance of the telescope and makes for ideal imaging conditions.

And the first fully aligned image just came back. It is absolutely stunning. 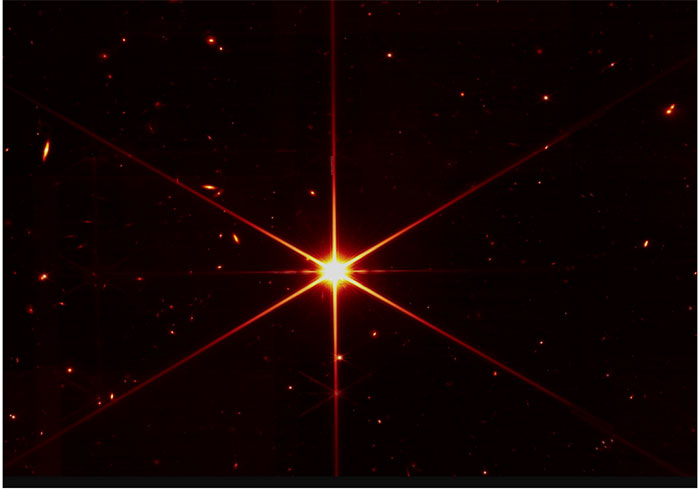 Here we can see the telescope focusing on a star deep in space. The resolution is incredible. NASA said the quality exceeded all expectations.

And look at all the small disk-like images around it… Those are galaxies. We can even see several spiral galaxies out there. Could they be similar to our own Milky Way?

This is just the beginning of what we can expect from the JWST. The images are actually going to improve as the telescope continues its calibration across a wider range of infrared frequencies.

We’re going to “see” our universe in ways that we’ve never experienced before. I’m certain that we’ll be for some incredible surprises as early as this summer. I can’t wait.

And of course, we’ll highlight it all right here in The Bleeding Edge. More incredible images to come…

P.S. There’s still time to catch the replay of my Perceptron reveals from last week.

As a reminder, this is my AI system that I spent half a million dollars building. It processes 4 gigabytes of data every day… and produces strong buy and sells signals in the cryptocurrency space.

More importantly, it’s enabling us to tackle short-term trades on cryptos for the first time… with a “profit window” of roughly 60 days. And in testing, it’s found trades with profits up to six figures…

We’re starting to get some very strong signals for what may become several new trades. So if you haven’t already, please go right here for more information.