If you’re a T-Mobile subscriber, or even someone who has applied for credit with T-Mobile in the past, you may be at very high risk.

Just announced yesterday was a major data breach, another hack, that revealed the personal information of almost 50 million people is available for sale on the dark web. The database, which contains information like names, birthdates, social security numbers, PINs, and driver’s license numbers can be purchased anywhere between $80,000 and six bitcoin (~$270,000).

T-Mobile has claimed that it was a “highly sophisticated cyber-attack,” yet details are already emerging that the cyberattack was possible due to an unprotected network gateway that allowed the hackers direct access to the company’s backup servers. Worse yet, the servers contained unencrypted sensitive data that was ripe for the taking.

The Solar Winds hack was sophisticated, the Microsoft Exchange server hack was as well. But this was a walk in the park.

Obviously, this kind of personal information can be used to enable identity theft, but it can also be used to perpetrate SIM swapping. This is where an attacker can take control of our phone number and port it onto another phone. This is particularly dangerous to those who use cloud-based services like Gmail.

Once a phone is ported, the hacker will try to take control of your email by using the “forgot password” button used to reset a password. From there, hackers will try to access other sensitive data and passwords for bank accounts, brokerage accounts, and of course, digital wallets that hold cryptocurrencies.

What can we do about it?

Well, if you are a T-Mobile subscriber, I’d recommend that you quickly change the PIN on your account as a first step. The second thing to do is to make sure that all your sensitive accounts are set up for two-factor authentication (2FA). This is the technology that requires us to enter in some kind of code after we have already entered our username and password.

There is a nuance, however. While receiving a code via text message or email is effective as a second factor for authentication, if the hacker has possession of your phone number and email account, you’ll still be at risk.

So ideally, use a third-party authenticator like Google Authenticator or Authy as the method for the second factor. These are software applications that can be downloaded to our phones that can be linked to your personal accounts. They have authentication codes that change every 30 seconds or so.

The biggest breakthrough in robotics yet…

We are going to start today with an incredible robotics breakthrough at Boston Dynamics. This is something readers will have to see to believe.

Let’s have a look:

How amazing is this?

This is the Atlas bipedal robot. And as we can see, it now possesses an incredible level of agility and dexterity. I don’t think many humans can do backflips as effortlessly as this.

And pay attention to what happened after that first backflip. Notice how Atlas repositioned itself on the box before doing the second backflip. That’s a critical nuance.

Boston Dynamics has had Atlas do demonstrations like this before. But every one of those demonstrations was pre-programmed. The robot was given a specific routine to execute. This required the room to be perfectly mapped out and all objects to be in exactly the right place.

What’s different about this demonstration is that Atlas now can perceive and understand its environment. And that allows the robot to adjust on the fly.

We see this clearly with that second backflip. Atlas recognized that it needed to be in a better position, made the adjustment, and then carried on with the routine.

So what we are looking at here is a functional, agile, and semi-intelligent robot that can operate in almost any physical environment. When we see tech like this, it’s not a leap to start thinking about all the possible applications.

Of course, the most obvious application is package delivery.

After watching this video, it’s easy to imagine Atlas jumping out of a delivery truck (literally), box in hand. The robot runs up to the proper home and gently sets the box down just like a human delivery person would do. Then Atlas runs back to the delivery truck to get ready for the next one. I’m sure that would be the talk of the neighborhood for a while.

The point is this robot is ready for commercialization. It’s easy to see why this was an attractive acquisition for South Korean conglomerate Hyundai. This kind of technology, which has required about two decades of research and development, is the future.

Disconcerting or not, in time, we’re going to see tech like this everywhere. I can’t wait to see what Atlas will be doing in the real world.

So we’ll be watching closely to see what deals Boston Dynamics makes on the back of this breakthrough. I’m sure there are plenty of companies that would love to employ Atlas’ services.

And the use of technology like this will drive additional efficiencies in the businesses that use them, and I’m sure we’ll have an opportunity to invest in this trend.

Something big is happening in the non-fungible token market. NFT sales are now up over 10X from their first peak in March (red line). 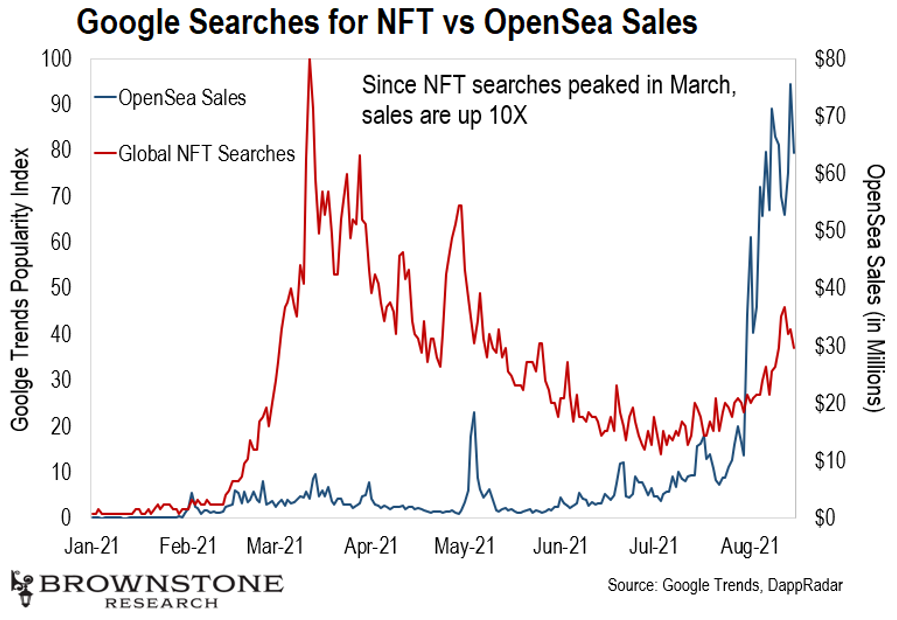 As a reminder, NFTs are digital collectibles. They allow us to cryptographically secure and authenticate unique assets or data on a blockchain. NFT’s are capable of not only conferring digital rights to something, they can even extend to attributing the rights to physical objects as well.

And as we can see, Google searches for NFTs are way down since the asset class burst on the scene in March. At the same time, NFT sales on NFT marketplace OpenSea have exploded 10X higher. The marketplace has now surpassed 60,000 NFT sales per day.

And get this – sales volume on OpenSea has already exceeded $1 billion in August. And the month isn’t over yet. For comparison, total NFT sales in 2020 were only about $250 million. That means we have done 300% more sales in just half a month than in the entirety of last year.

So there’s an incredible level of activity in the NFT market right now. And it’s not at all random.

On July 30, an anonymous group spent $7 million to take the cheapest 104 CryptoPunk NFTs off the market. CryptoPunks is one of the first Ethereum-based NFT sets ever created. And this was clearly a targeted buy.

The same thing is happening with generative art NFT projects. This refers to artwork created by computers and sometimes artificial intelligence.

The point is the digital collectibles trend is taking off. This isn’t a fad. And I expect this growth to continue as more and more assets are developed in NFT form. This is one of the hottest trends in the blockchain industry right now.

That’s why I recently put together a presentation to show readers how to dip their toes into this market for the first time. If anyone has an interest in learning more about how NFTs work… And some key projects in the space for investors… Then I encourage you to go right here to watch.

Lithium-ion batteries may finally have competition…

We’ll wrap up today with some very bold claims about bleeding-edge battery technology.

This tends to always be a hot topic for many of my subscribers, and for good reason. The company, or companies, that develop the next generation of battery technology are going to make investors an absolute fortune.

Silicon Valley-based startup Sakuu just announced that it has developed a solid-state battery that rivals lithium-ion technology in terms of performance. This could be huge…

There have been many companies pursuing solid-state batteries recently. But it’s proven a difficult problem to solve.

However, the challenge has been achieving energy density on par with lithium-ion batteries. Up to this point, solid-state batteries have fallen well short in that regard. But that may have just changed…

Sakuu said that it has developed a small three amp-hour battery with energy capacity comparable to an equivalent lithium-ion battery. If true, this would be a major breakthrough. And it would be just a matter of time before Sakuu had larger solid-state batteries ready to compete with lithium-ion ones.

And here’s what’s most exciting about Sakuu – the company is using additive manufacturing technology to make its batteries. It uses what’s called “binder jet printing” to 3D print both the metal battery parts and the ceramic electrolyte material.

While Sakuu envisions its technology to be used for the electric vehicle market, its technology can be used to produce batteries of any size and would be suitable for consumer electronics as well. That would be a major competitive advantage.

So this is absolutely a company I’m going to be watching.

It’s important to note that Sakuu has not demonstrated that its solid-state battery is on par with lithium-ion technology yet. We need to see proof of that before we can get too excited.

And that’s why I’m watching closely for a major early stage funding round in the coming months. If Sakuu’s claims are true, I’m sure there are a lot of venture capital (VC) firms that will want in on the action. And we can be sure that the venture capitalists will require proof of concept before making a major investment.

So if we see a large VC round backed by strong investors in the space, we’ll know Sakuu is on to something big. I’ll be tracking this story very closely.

P.S. Don’t forget to mark your calendar for next Wednesday, August 25, at 8:00 p.m. ET. That’s when I’m going on air to reveal our first major push into blockchain technology and the crypto markets here at Brownstone Research.

As I’ve mentioned several times in recent weeks, we have been working furiously behind the scenes to uncover novel ways for investors to play the hottest trends in blockchain today.

And what sets the current crypto surge apart is the underlying infrastructure that’s been built over the last few years. That’s what gets me excited. And it’s why I have not made investment recommendations in the crypto space before. The market was too immature previously. It lacked the core infrastructure.

Now I’m finally ready to dive head-first into blockchain technology and crypto assets. And we have identified several unique investment opportunities that are available to all investors right now.

For my readers who are interested in crypto and the blockchain industry, please set aside some time to join me next Wednesday evening. I will talk about the most exciting developments in blockchain. We’ll discuss where the industry is going from here. And, of course, I’ll reveal the investment ideas we have been working hard on here at Brownstone Research.

It’s all happening next Wednesday, August 25, at 8:00 p.m. ET at my Click for Crypto event. Just go right here for all the details.