Van’s Note: Van Bryan here, Jeff Brown’s managing editor. As longtime readers know, blockchain is one of the most promising emerging technologies. And as a member of the Chamber of Digital Commerce, Jeff is a vocal proponent of blockchain adoption.
So today, we’re sharing a timely insight from our colleague Teeka Tiwari. Like Jeff, Teeka’s a long-term bull for quality digital assets. Bitcoin is up more than 150% on the year. But most so-called altcoins have failed to keep pace. In today’s special morning edition of The Bleeding Edge, Teeka reveals what he believes is behind this dynamic and what could spark a market-wide crypto rally.

I’ve gotten a lot of mail recently from people wondering, “When will altcoins catch up to bitcoin?”

Before I answer that question, I need to talk about bitcoin…

We’ve seen bitcoin go as high as $14,000 this year before dropping to $9,180. Despite the pullback, it’s still up 172% year-to-date – making it among the best-performing assets in the world.

Now, I’ve been saying since April 2019 that the “Crypto Winter” bear market is over. Institutions are coming into the crypto space – and the demand for bitcoin is skyrocketing. This is still the year of Wall Street greed.

So I don’t see bitcoin flopping over and falling apart. In fact, I see it gaining even more strength from its current strength.

And this shouldn’t come as a surprise to you. Everything I’ve said about bitcoin is starting to fall into place. For example, brokerage firms like Fidelity and E-Trade will soon allow people to buy bitcoin with the click of a mouse.

Friends, what we’re seeing now is just the beginning. And today, I’ll show you why you should continue to be patient as this massive trend plays out…

Bitcoin Is Still in an Uptrend

As you can see in the chart below, bitcoin is in a major uptrend… 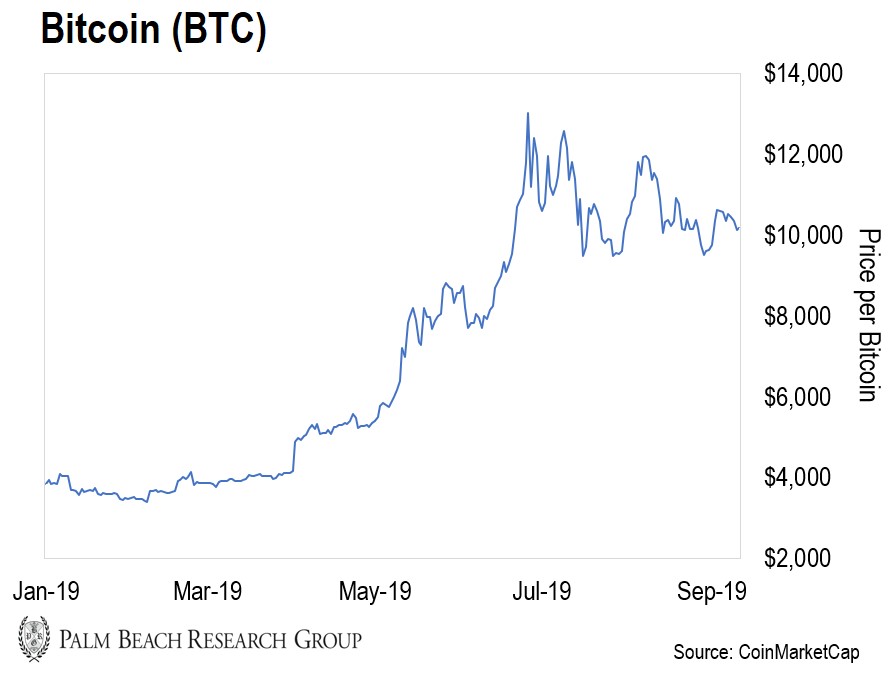 Now, bitcoin doesn’t go up in a straight line; it’s volatile. So trying to predict the next pullback after an 18-month bear market is a dangerous game.

So bitcoin could take a pause near $20,000. But once it clears that level, there’s no overhead resistance. When it decides to run, it doesn’t look back.

And that brings me to the altcoin market…

When Will Altcoins Catch Up?

Bitcoin has outperformed the altcoin market since the start of the year.

So investors fear their other coins will get left in the dust. Some folks have even asked me whether they should sell all their altcoins and go all-in on bitcoin.

It’s a good question. But before you rush out and cash in your alts for bitcoin, I want you to do one thing for me: Take a deep breath.

I want you to know what we’re seeing now is perfectly normal.

Every time crypto emerges from a brutal bear market, bitcoin always rallies first. On average, it outperforms for about six months. After that, the altcoin market catches up.

And in many instances, altcoins even surpass bitcoin – like they did during the 2016 bull run… 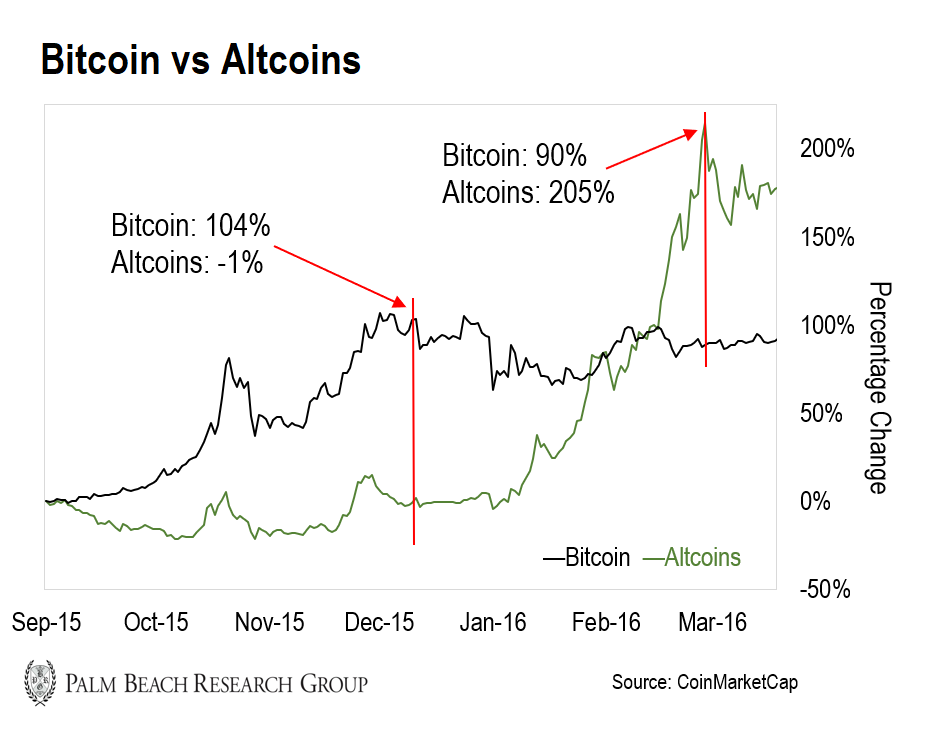 That’s why I counsel patience. This bull market is unfolding exactly as it should – with bitcoin leading the way and altcoins playing catch-up.

Look, institutions want to get into this market. They just don’t have the infrastructure to do so – yet.

But people are building the “on-ramps” and “off-ramps” that’ll allow the big money to easily get in and out of crypto assets. By year-end, institutions will have fully compliant platforms they can use to buy, sell, trade, and store cryptos.

I want you to understand just how huge this is.

Remember, Bakkt is a subsidiary of the same company that owns the New York Stock Exchange. And instead of settling bitcoin futures by cash, it’ll actually buy bitcoin on the open market and custody it. That’s never happened before.

Now, I’m not suggesting bitcoin’s price will go to $30,000 or $40,000 overnight because of it. But for the first time ever, institutions will have a trusted intermediary to finally access this asset.

Compare that to where we were back in 2016 – when people were sending me hate mail saying, “Why are you talking about this magic internet money that’s only used by pornographers, money launderers, and gunrunners?”

So you can see how far we’ve come since then.

There’s an old saying that goes, “Don’t quit on the one-yard line.” It’s something a lot of people do.

They do all the work and go through all the effort. But just as they’re about to have their breakthrough, they throw up their hands, and say, “Oh, I’m done.”

Friends, we’re so close. Everything we’ve been waiting and looking for is starting to come to fruition.

So let’s just give the market some room to breathe and time to develop. You’ll be amazed at what happens when institutional money has a legitimate and trusted way to get into this space.

We just have to let time do the heavy lifting.

P.S. On September 18, I’m hosting my first LIVE crypto training session of 2019. And I want to invite you to attend for free.

You see, I’m pulling back the curtain on five tiny cryptos that could make you millions – in as little as 10 months. It’s all thanks to a lucrative phenomenon that we won’t see again until 2024. And I’ll even give away my No. 1 crypto pick, too.

So click here to accept my invitation and join me on the path to becoming a crypto millionaire.