When the Fed speaks, the world listens.

The chair of the Federal Reserve Bank holds the most powerful seat in the world. Sure, POTUS commands all the attention. But no one has a more immediate or long-term impact on asset prices than the Fed chair. Sometimes all it takes is two words.

On December 5, 1996, during the dot-com bubble, then-Fed chair Alan Greenspan made a speech on TV. When he uttered the words “irrational exuberance,” Tokyo markets slid sharply, closing down 3% from the high. The world markets followed suit and took his meaning that markets could be overvalued.

And last week, just the minutes (notes) from the December Fed meeting were released. The language in it was “hawkish,” meaning that money might become tighter soon. The phrase “sooner than anticipated” littered headlines on January 10. That was all it took to cause a big skid for stocks – particularly tech stocks.

Those words have big implications for our financial future. The questions arise: How bad is it? Or is it really bad at all?

Hi, I’m Jason Bodner, the editor of Outlier Investor. I spent nearly two decades on Wall Street. My job involved the biggest stock trades on earth for hedge funds and other big investors. In doing so, I had a bird’s-eye view of how the market really works.

And that view enables me to see things others can’t. For instance, rewind to a couple of years ago, and stocks were raging. Everything was rising: good stocks, bad stocks, and most things in between. The party felt like it wouldn’t end. And for many, investing seemed like child’s play.

Unpopular as it was, I went out and called the market overbought in late January 2020. Of course, I had no idea an unexpected pandemic would grip the world and crush global stocks. My data just told me the buying wouldn’t last.

But the crash didn’t last either. My data said we were oversold, and we should expect a market low on Friday, March 20. It happened one market day later – Monday, March 23.

And what’s happened since has been unexpected as well. Stocks went straight up, eventually hitting new highs, despite the unprecedented conditions of lockdowns.

The fuel of the rally was big financial stimulus and aid. It was aimed at flooding the country (world) with liquidity to calm nerves and lubricate commerce. Rates dropped to near zero (or negative in some parts of the world), and the spigot of funding from the government was on full blast.

While we all knew it would eventually have to come to an end, no one ever wants the party to stop.

Yet now the Fed says it has to stop, and stocks have been taking the hit.

Looking Even Further Back

My bird’s-eye view of market mechanics also helps at times like these – when there are big reactions to potential Fed policy changes.

Today, let’s look backward to a similar time to see what might be in store for us moving forward.

In 2013, another Fed chair was causing financial turmoil. This time, it was Ben Bernanke. All he said was that – at some point in the future – the Fed would slow its pace of bond purchases.

This was a slap in the face to investors.

You see, in the Great Financial Crisis of 2008, the Fed came to the rescue by buying bonds. This injected desperately needed liquidity into an ailing system. Five years later, Bernanke was signaling that was going to slow down.

Investors freaked out and sold bonds, shocking the market. Stocks followed that next spring. At the beginning of April 2014, “momentum stocks” sold off hard. Many of my recommendations and personal holdings were suddenly under immense pressure.

It was ugly and very uncomfortable. 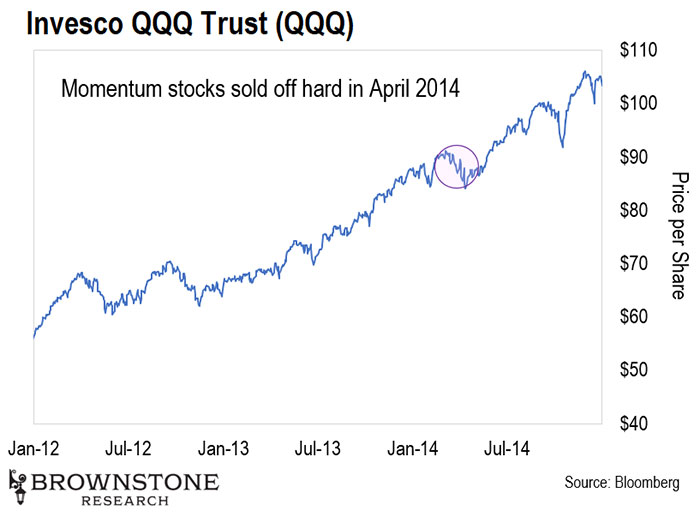 Keep in mind, the “momentum” stocks then are today’s tech stocks known as FAANG: Facebook, Apple, Amazon, Netflix, and Google. Naturally, they are now the mainstays of the Nasdaq.

Does any of this sound familiar?

Now Fed chair Jerome Powell is faced with a dilemma similar to Bernanke’s. He has to fight inflation and hint at a tighter money policy… but not so much so as to tank the economy. Talk about a stressful job!

The tech-heavy Nasdaq started selling off in September, only to rally again. But since November, it hasn’t really gone anywhere. During that time, under the surface, tech selling has been huge for the modern-day “momentum” stocks. 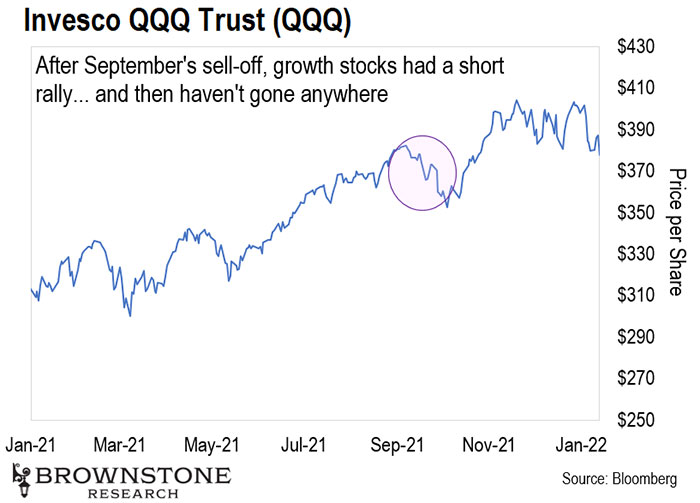 If the Fed winds down quantitative easing (QE), there’s less money in the economic system to buy stuff. Then if the Fed raises rates too, money becomes more expensive and harder to borrow.

And the rate of those hikes matters too.

Goldman Sachs just said it expects four rate hikes in 2022. JPMorgan said we could expect more volatility into the summer (if not the rest of the year), and “if we’re lucky,” we could have a “soft landing.”

Yet investors are reacting like that’s a one-two death punch for growth stocks.

The reasoning is that if rates go up, growth companies depending on debt to finance their growth will have more expensive debt that will eat into profit margins.

Also, if there’s less money to buy their products, sales might suffer.

What Investors Have Wrong

I think investors have it wrong – like so many times before. The Fed needs to send signals like these. It needs to engineer a soft landing. It can’t raise rates too fast for one key reason: all the stimulus, aid, and QE was designed to keep our economy afloat and progressing.

Why on earth would they do years of work only to undo it now?

And given how huge the balance sheet is, the Fed can’t hike rates too fast, as the interest alone on our debt will become crippling.

Even if it did raise rates double Goldman’s expectations for 2022, we’d still only be back at 2019 levels: 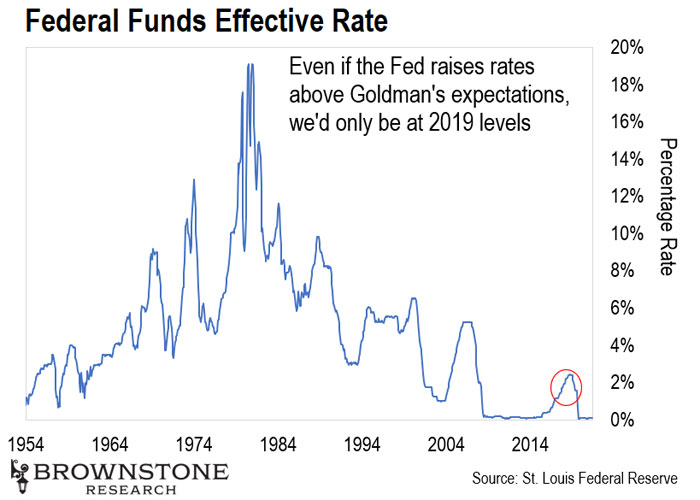 The Fed must fight vicious inflation, but I don’t think it will cut off our nose to spite our face.

That’s why I think growth stocks are actually a good buy right now.

It’s been volatile, ugly, and painful to be a growth investor for the past few months.

But it has been glorious to be a growth investor for the past 30 years.

The only thing that can keep our economy forging ahead is the growth of commerce. And over the long term, there’s no better place to invest in that than in growth stocks.

And with growth stocks under pressure from an overreaction – just like we’ve seen before – I think it’s good to buy growth on dips.

The iShares Russell 1000 Growth ETF (IWF) has pulled back and holds many large-cap and mid-cap growth companies. It’s full of outliers and has great potential for years to come. 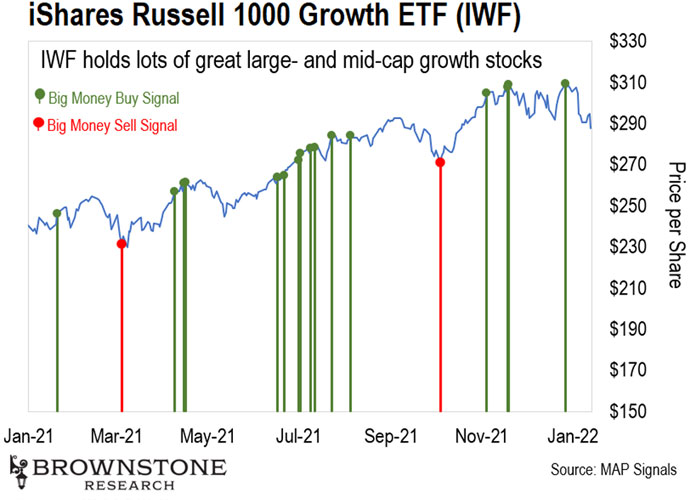 And for those who are more adventurous, I like Cathie Wood’s ARK Next Generation Internet ETF (ARKW). It’s loaded with great growth companies that have game-changing implications for our tech-reliant future.

It’s under heavy pressure and is down substantially… -42% from its high. It could be a rocky ride, but if you’re interested in a growth at a discount from highs, this is a great scoop. 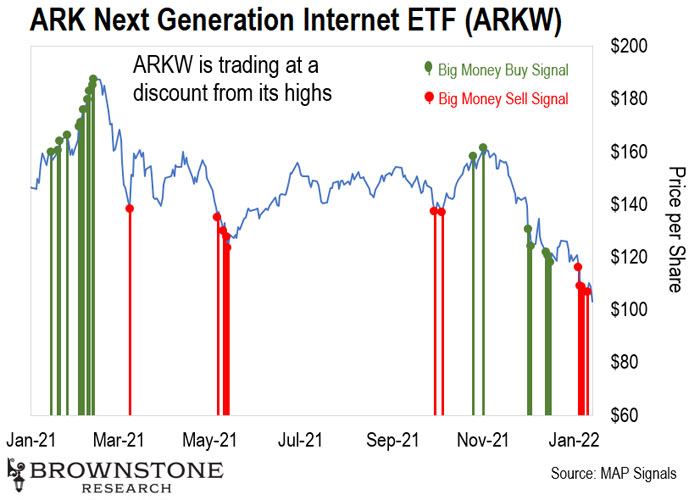 Plus, investing in ETFs increases diversification and lowers the risk of overexposure in any one given stock.

When the Fed speaks, everyone listens. Or, should I say, everyone overreacts?

It knows this well and is starting to trickle out signs that the landscape will shift. But believe me, they don’t want to sink our ship after the years of rescue work that has been done.

And with small moves by the Fed to heighten rates and tighten money, the U.S. economy can begin to do what it does best: grow on its own steam.

It may sound crazy, but I think the bears have it wrong. I think we’re about to embark on a new “Roaring Twenties.”

And I think the engine will be growth.

P.S. Many longtime readers will know that I work closely alongside Jeff Brown. He’s one of the great minds of technology investing, and when he says to pay attention, I sit up straight in my chair.

That’s why I’d like to put a special event on your radar. On January 26, at 8 p.m. ET, Jeff is hosting an event all about NFTs… “non-fungible tokens.”

Money has been flooding into these digital collectibles… and that means opportunity for investors willing to wade into this developing space.

So even if you’ve never heard of an NFT – or think it’s just a fad – I’d like to encourage you to tune in to hear what Jeff has to say. He’ll even be giving away the name of an investment that he believes will benefit from this NFT boom for free to all who attend.