Last week, Jeff was invited to be a guest on “The Glenn Beck Podcast.” You likely know Glenn Beck as a popular author and political commentator. But what you might not know is that he is also a technology enthusiast. And he’s well-versed in the trends we cover here in The Bleeding Edge…

Yesterday, we shared an excerpt of Glenn and Jeff’s conversation on quantum computing and nuclear fusion (catch up here).

Today, Glenn and Jeff tackle one of the most important questions of the next 10 years: Is humanity ready for the technology that is about to be unleashed?

I’m talking about tech like quantum computing that can crack military-grade encryption in seconds… artificial intelligence that is smarter than any human on the planet… and even genetic editing that can make “superhumans.” As Glenn put it, “Are we ready to face this?”

Read on to find out…

Is Humanity Ready for the Technology That’s Coming?

Glenn Beck: Before my father died, he said, “Glenn, look at technology.” When he was born in 1926, space travel was H.G. Wells stuff. It was fiction. We didn’t think we would go to the Moon. And he said, “Now look at us. Look where we are in technology.”

But look at the times of the Greeks, the Romans, Jesus. Where were we in philosophy and human decency? From then, we haven’t really gained that much. Are humans ready for that leap? Are we ready to face this?

Jeff Brown: We’re not. We’re not ready for this. And it’s not our fault. As humans, we are predators. It’s almost literally in our DNA. We only think in a very linear, step-by-step fashion. But the technology coming is not that. It is exponential. We’re just starting to climb that “hockey stick,” where change accelerates unbelievably fast. I wouldn’t have said that four years ago. But it’s here now. And nobody can get their heads around it.

Glenn: You’re already seeing it. Every week, if you pay attention, there’s something that happens. Maybe it’s quantum computing. And you say, “Wait, what?” We hit that one day, and the next day it’s something else. By 2030, we will not be able to keep up with the profound technological changes.

Jeff: It’s kind of like that moment when hearing somebody say “$1 trillion” became as normal as saying “$1 billion.”

Glenn: Right. You don’t even know the difference. Because it’s so massive.

Jeff: When you think about the weight and the frequency of some of these announcements that are happening in the world of technology, it’s hard to internalize the impact they will have on society. That’s why handling technology in an ethical way will be one of the most important challenges humanity faces in the next 10 years.

Jeff: I would argue the U.S. has done a pretty good job avoiding that. In China, when you get a driver’s license, you have to undergo a facial recognition scan. And now you are in the database. And any camera in the entire country can track where you are at any given time because they can recognize who you are.

But the U.S. hasn’t done that. And that gives me encouragement that we can maintain a much healthier balance. But we have to stay resolute on ensuring that we don’t move in the same direction. I’m not saying it’s easy. But we have no choice. And things might still end very badly…

Glenn: Look how much we’ve given up already…

Jeff: Especially if that data isn’t completely private and secure. But in many ways, technology is out of the bag. Did you know that they sell CRISPR genetic editing kits online for a few hundred dollars? Anybody can order them online.

Glenn: Wait, so if I want to be a hairstylist or a manicurist, I have to have a license? But if I want to alter the genetic code, I’m good?

Jeff: Oh yeah… But I’m hopeful. In the West, they have been very progressive with how they handle genetic editing technology. They establish organizations and ethical frameworks. And they’ve made great progress. One thing the industry won’t permit is germ line editing. That’s editing an embryo before the child is born. But China has done precisely that.

Glenn: Doesn’t South Korea lead the way in some of those spooky things?

Jeff: Well, they do a lot of research with stem cells. But this was germ line editing. And it completely crossed the line. And the Western community was completely up in arms about it. They took a firm position that it was completely unethical to do that without knowing what the impact would be to the child.

Jeff: Right. But back to your point about being vigilant with the ramifications of today’s technology. We slowly give away more of our privacy and our freedoms and our information unknowingly. And we do it because the value we receive in exchange is so convenient. That’s the case with using Facebook or Google.

And at first, everything is great. And then, suddenly, we wake up one day and say, “Oh my gosh, what have we done?” How far have we gone, and how can we recover from this stage?

Will technology “stuff man in chains”?

Glenn: A rabbi taught me the oral tradition of the Tower of Babel story. I think about it almost every day. The story is that a politician says, “Let’s make bricks, and we’ll build a tower to the sky.”

But God shows up and confuses the language. So they have to scatter, and it all comes apart.

Today, our language is binary. You know what I mean? It’s technology. And sometimes I fear somebody will set off an EMP [electromagnetic pulse] and shut down everything. It scares me, but it also gives me hope. Because if things really did get crazy, it would be benevolent to confuse the language like that. I don’t think man’s story ends here. I hope not.

Glenn: A friend of mine is Penn Jillette. And he has great hope because he said, “You can’t stuff man into chains. There is too much information. There is too much access. There are too many people to be able to clamp down for very long.” Do you believe that?

Van’s Note: Van here again. As I mentioned yesterday, every reader of The Bleeding Edge should put aside time to watch the full interview between Jeff and Glenn. Catch it right here or by clicking the image below. 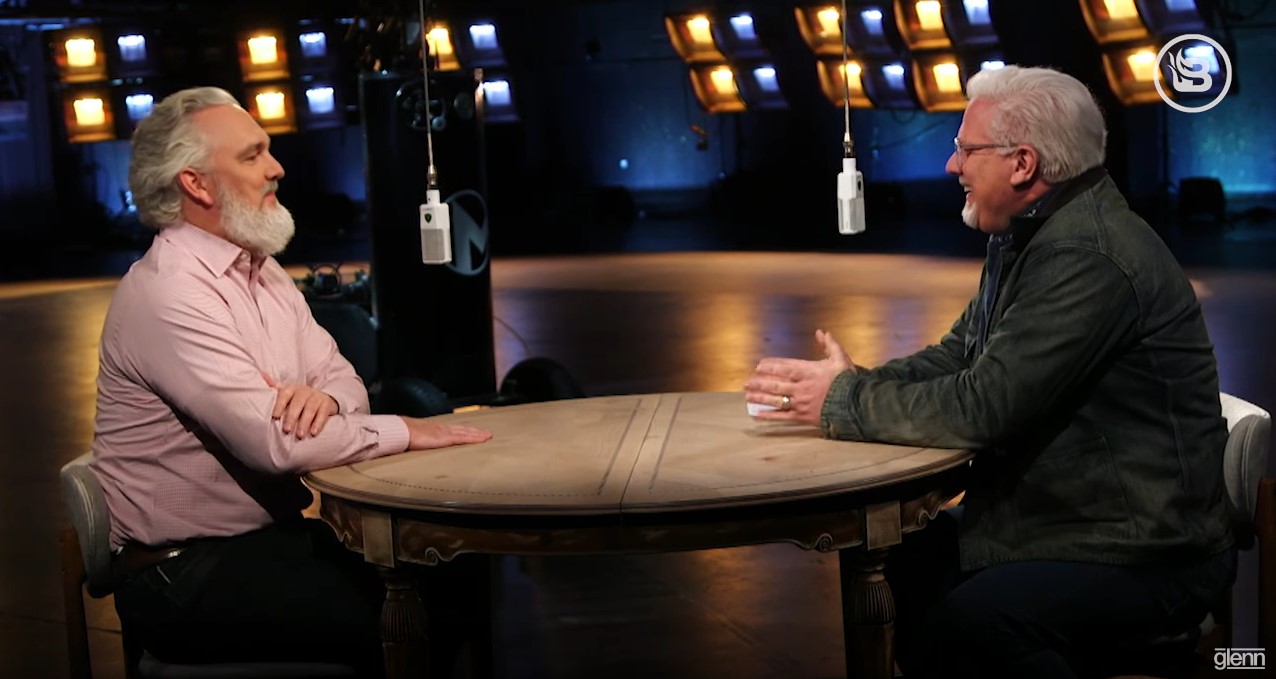