Van’s note: Van Bryan here, Jeff Brown’s longtime managing editor. At the end of every year, I sit down with Jeff to discuss his biggest predictions for the coming year. Remember, you can always catch up on earlier editions in this series by going here.

Today is our final edition of Jeff’s predictions. And to cap off the series, I sat down to ask Jeff about IPOs, the future of SPACs, and what he sees coming for private tech markets.

On behalf of Jeff and the entire team, we wish all subscribers a Happy New Year. We look forward to another great year in 2022, and we thank you for being a reader.

Van Bryan (VB): Jeff, today is our last prediction. And I thought we’d talk about IPOs and private markets. And to start, let’s check in on your prediction from last year. You predicted that 2021 would be a record year for IPOs. 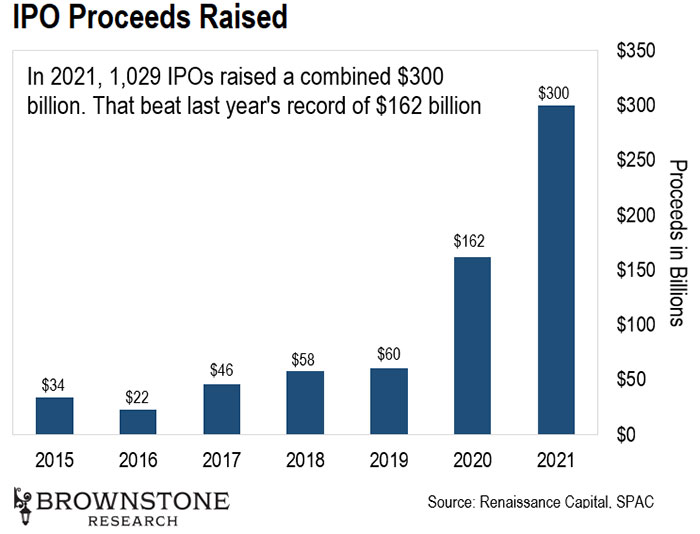 What we are seeing now is part of a larger prediction I made all the way back in 2015 and 2016. At the time, I saw a glut of exciting private companies lining up to go public. These companies had been putting off going public for years longer than was normal.

The pressure was building like champagne in a bottle. And what we’ve seen these past few years is that the cork has “popped” and all these exciting private companies are finally reaching the public markets.

VB: And what about 2022? Do you think we’ll see another record year for IPOs?

JB: I was absolutely certain of it for 2021. I won’t say it’s a guarantee for next year, but it’s probably a safe bet we’ll see another record for IPO raises. And one of the reasons is that there are now some massive private companies that could make the entire year.

A company like Stripe comes to mind. It could go public at a $150 billion valuation. And an IPO of that size could drive the entire year.

JB: “SPAC” stands for “special purpose acquisition corporation.” A SPAC is a public company that exists for one reason: Complete a “reverse merger” with a private company and bring it to public markets.

It’s a little similar to how private equity works. A SPAC raises money from investors for the purpose of merging with a private company. For this reason, SPACs are sometimes called “blank check companies.”

And you’re right. I launched Blank Check Speculator in January as a dedicated service for these investment vehicles. And the reason is simple.

SPACs give retail investors a seat at the table before the official IPO day. And that’s good for regular investors. Because in a traditional IPO, what tends to happen is that the majority of IPO returns are seen by large, wealthy investors who can get an allotment of pre-IPO shares. Retail investors miss out.

I’ll give you an easy example…

In December of 2020, Airbnb held its IPO. The stock was priced at $68 per share. But demand was so high that – when the stock opened for trading – it began trading around $146. That’s more than double the original listing price.

This was not an isolated phenomenon. We’ve seen it happen again and again. Pre-IPO investors reap the largest returns, and retail investors are cut out.

The benefit of SPACs is that it allows normal investors to take a position before the reverse merger, which is essentially IPO day. It’s one of the few ways for regular investors to essentially acquire pre-IPO shares in exciting companies.

And we got our first successful investment in a SPAC with that service.

Back in May, I recommended investing in a SPAC called Reinvent Technology Partners Y. One of the sponsors of the SPAC was Reid Hoffman, the founder of LinkedIn and a member of the original “PayPal Mafia.” Hoffman is exactly the type of sponsor we want working on our behalf in a SPAC.

And sure enough, Reinvent announced a reverse merger with Aurora, one of the most exciting self-driving companies in the world. The stock popped.

And in November, I recommended conservative investors could sell their shares for close to a 67% return. And because we invested at the unit stage, investors also received warrants. With our original cost basis, we’re up 231% on the warrants.

[Van’s note: Shortly after a SPACs original IPO, investors can buy “units” in the SPAC. These units typically contain one share and partial warrant coverage.] 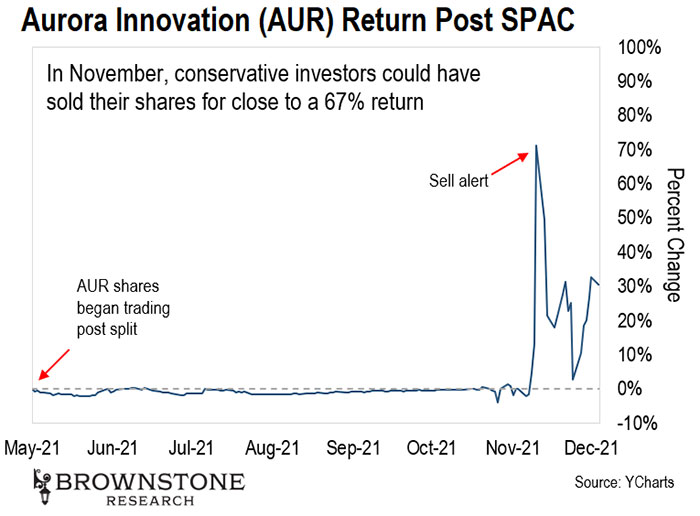 VB: That’s a great return in such a short time, but we should also mention that SPACs also had a rough patch earlier this year, didn’t they?

JB: The SEC issued a clarification on accounting rules for SPACs in spring. We don’t need to get into all of the details, but what happened is that we had about three or four months where SPACs had to work through these modifications. Some had to modify and refile. And the effect was that we had a low period in the market where activity slowed down.

But what was encouraging is that we saw SPACs start to get back to normal in the second half of the year. And 2021 turned out to be a record year for SPAC IPOs… more than double last year. 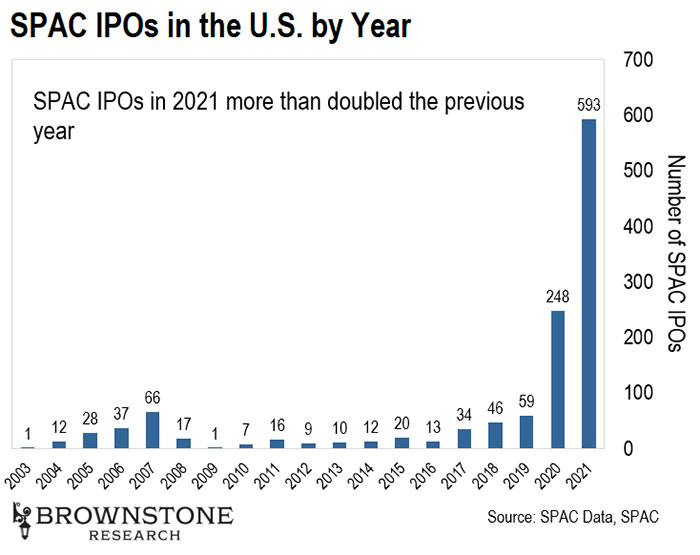 And 2021 was the second year in a row where SPAC proceeds outpaced traditional IPOs.

What this tells me is that SPACs are starting to become a preferred method for some smaller private companies to reach public markets.

And I think we’re going to have an exciting year in 2022. Subscribers to Blank Check Speculator now have a diversified portfolio of high-quality SPACs.

VB: That’s great, Jeff. Before we close the books on 2021, I’d like to ask you about one of your specialties – private markets. What do you see happening in private markets in 2022?

And we should keep in mind that institutional investors are sitting on as much as $1.5 trillion in “dry powder.” That’s more than Australia’s annual GDP.

There has never been this much institutional capital available in history. And the bulk of this money is going to be allocated to high-growth private tech and biotech companies. That’s where the returns are highest.

But what was really striking to me was the evolution we’ve seen in crowdfunding investments.

According to Crowdfund Capital Advisors, an institutional firm specializing in crowdfunding raises, Q3 of this year was the best quarter ever for crowdfunding raises. Close to $150 million was raised in that quarter, which was basically double from the year before.

This is important because, historically, private investments were off-limits to regular investors. They were almost exclusively for VCs and wealthy, accredited investors.

And that has been one of the most unfair dynamics I’ve ever seen. Why shouldn’t regular investors be allowed to make educated investments in great private companies? To me, that was wrong.

And that’s why the progress in crowdfunding raises is so encouraging. We’re witnessing a sea change in how private companies raise capital for their early development. And the best part is that retail investors will be able to participate early… on “day one,” as I call it.

VB: Jeff, you’ve been a private investor for decades. You’ve invested in as many as 300 private deals. And in 2021, you finally launched a dedicated research service for these crowdfunding opportunities, Day One Investor. Why did you think 2021 was the right time for this publication?

JB: It’s certainly been a long time coming. Day One Investor is the product I’ve wanted to launch for the past six years. But I held off. And the reason is simple: I couldn’t guarantee a good experience for my readers.

Crowdfunding deals have been around since 2012 – that’s when they were made available through the JOBS act.

Under the original JOBS Act, companies could raise up to $1 million via a Regulation CF raise and up to $50 million for a regulation A+. That might sound like a lot of money.

But for an early stage company, $1 million is simply not enough to fund early development. And the onerous requirements that go along with Regulation A deals made this option unattractive for founders who could easily raise that level of capital from venture investors.

As a result, very few quality companies pursued crowdfunding opportunities. This is the reason why I never launched a dedicated private research service. I simply couldn’t guarantee a good experience for my subscribers.

JB: Everything changed in 2021. The SEC raised the cap for Reg CF to $5 million. Regulation A+ also increased to $75 million.

With a $5 million cap, a fully funded Reg CF offering is now on par, if not better, than most seed rounds traditionally raised by venture capital. And the terms offered to private companies pursuing a Reg CF will be much more favorable for both investors and founders.

This is having an incredible impact on private markets. The ground is moving beneath our feet.

And I’ll make my next prediction: I predict 2022 will be another record year for crowdfunding raises both in terms of capital raised and the number of completed deals.

It will be common for exciting private companies to raise capital through crowdfunding regulations first. This would be a seed or even pre-seed round. This would give the company a few years of runway to build their product or service, find their sweet spot in their industry, develop a go-to-market strategy, etc.

Then, they could turn to venture capital for later raises when the valuation will almost certainly be higher.

The implications of this are important.

Investing on “day one” is when the potential returns are highest. Quality private companies have returned 10X, 100X, even 1,000X returns to private investors over the long term.

That won’t happen with every private company. Many will fail altogether. But it only takes one great success story to build generational wealth. And for the first time, regular investors will be able to participate in this market in a meaningful way. I’m very excited about what 2022 holds.

VB: Thanks for your time, Jeff.

JB: Of course. And I hope the readers have enjoyed the predictions.

Jeff will be back with his regular issues of The Bleeding Edge on Monday, January 3. Again, we wish all readers a Happy New Year.