This morning, my seven-year-old son walked into my home office…

It was two minutes before the stock markets opened. He was holding a beer in his hand. Somehow, he knew it was going to be a rough day in the markets. Smart kid…

I opted for an iced tea instead. But I appreciated the kind gesture.

It was a candid press briefing by President Trump, Dr. Deborah Birx, and Dr. Anthony Fauci. The briefing outlined a scenario of 100,000–240,000 possible deaths in the U.S. from COVID-19.

There was clear guidance that the next couple of weeks are going to be very tough as we watch the number of cases skyrocket upward.

To date, the U.S. has tested more than one million patients for COVID-19. That’s more than any other country. And with more than two million COVID-19 tests becoming available every week, we’re going to also see an incredible spike in data from these tests. This is great news.

These rough forecasts stand in great contrast to the appallingly bad research from Dr. Neil Ferguson from the Imperial College in the U.K.

The New York Times latched on to such a sensational headline and ran with it, as did so many other media outlets.

And get this… The underlying assumptions of Ferguson’s research were that governments, private companies, and individuals would not change their behavior at all… nor would they take any “control measures.”

The University of Massachusetts Amherst recently released research that surveyed 20 infectious disease experts in the U.S.

The aggregate results indicate that peak hospitalization will likely take place in May. And the average prediction for deaths came in around 245,000.

These estimates are far more pragmatic than the nonsense that Imperial College published. But they are still too aggressive. Why?

Based on what I’m seeing, the mortality rate assumptions are too high.

U.S. research to date has not focused on determining what percentage of the population is asymptomatic or has conditions too mild to even see a physician.

The numbers from Iceland show us clearly that 99% of those tested and confirmed to have COVID-19 fell into those two categories.

That’s why this is such good news.

But the number of COVID-19 cases is significantly higher than reported. Keep in mind that hundreds if not more than a thousand people infected with the virus arrived in places like New York, San Francisco, and Seattle in early January.

With no controls in place – and because of the exponential growth rate of infection – the virus spread unhindered for one month.

This may come as shock, but as many as 100 million Americans may have already contracted the virus but were either asymptomatic or only showed mild symptoms.

The next two weeks will be harrowing. The press will make sure of it.

A perfect example is the renewed focus on our infrastructure. President Trump called for a new $2 trillion bill to put people back to work on U.S. infrastructure. With interest rates at pretty much zero, this is a smart thing to do.

And it’s not just roads, highways, and bridges. There is an intense focus on the new 5G wireless infrastructure that needs to be built out around the world to deal with the exponential growth in data traffic.

The most critical companies for this infrastructure build-out are dropping to “bargain” valuations. That’s not something we normally see in bleeding-edge tech companies.

As we watch this panic-driven fear, we’re going to be ready to pounce on the best names in the tech sector.

I want all my readers to take advantage of this incredible setup with 5G investments. That’s why I’m hosting a special 5G investment summit next week. It takes place on April 8 at 8 p.m. ET. Reserve your spot right here.

Johnson & Johnson launches into the fight against COVID-19…

Health care giant Johnson & Johnson (J&J) just announced that it will pour $1 billion into developing a vaccine for COVID-19. This comes as J&J expanded its alliance with the U.S. Biomedical Advanced Research and Development Authority (BARDA).

J&J said that it will have a vaccine ready for testing by September… though it doesn’t know what it will be yet. And J&J also said it will be able to produce more than one billion doses of the vaccine when it’s ready.

The company will open a new manufacturing plant in the U.S. Oh, and it will make the vaccine available on a not-for-profit basis.

This sounds quite noble. But let’s look at what’s really going on here…

If everything goes perfect in testing, J&J will have its vaccine ready in the first half of next year. But these types of viruses often mutate and fade away in about 12 months’ time.

There’s no doubt in my mind that J&J understands this. All the large pharmaceutical and biotechnology companies are piling on with COVID-19 plans. It is all about public relations and buying favor with the U.S. government.

Drug pricing has been a hot topic recently. These companies are trying to appear to be acting nobly. They want leverage when it comes time to negotiate drug pricing practices once again.

We can imagine them sitting on the opposite side of the negotiating table from policymakers. Policymakers want lower drug prices. But the drug companies say, “We committed $1 billion to the fight against COVID-19… We did our part to help the world, and it came at great expense.”

And if we look at its financials, $1 billion is not a lot of money to J&J. The company is sitting on $19 billion in cash right now. And it will generate about $20 billion in free cash flow this year.

A billion dollars makes for a good headline, but in reality, it really doesn’t impact J&J’s financials much.

Of course, I’m not suggesting that this is the only motivation for the large biotech firms to find treatments for COVID-19. They do recognize the need for effective treatment against this virus. And I believe those working on the possible vaccine are sincere about contributing to the global effort.

But make no mistake, PR considerations are going into some of these decisions by “Big Pharma.”

So I’m not very optimistic about J&J’s ability to help with COVID-19. Not when there are more dynamic companies much further along in development and far nimbler than J&J.

In fact, I recently identified one company that I believe could be a frontrunner for an effective therapy against COVID-19. It’s likely one that investors have never heard of. All the details right here.

We’ve talked about Lyft’s self-driving taxi service before. Using Aptiv’s self-driving technology, Lyft launched the pilot program in Las Vegas back in January 2018. It was centered on the Consumer Electronics Show (CES). This is one of the largest tech conferences in the world.

At first, the self-driving service was supposed to be a one-week experiment. Lyft wanted to see if consumers would be willing to order a self-driving car to get around Vegas if it cost less than a regular Lyft ride.

And the answer was an emphatic yes… so Lyft kept the service running. 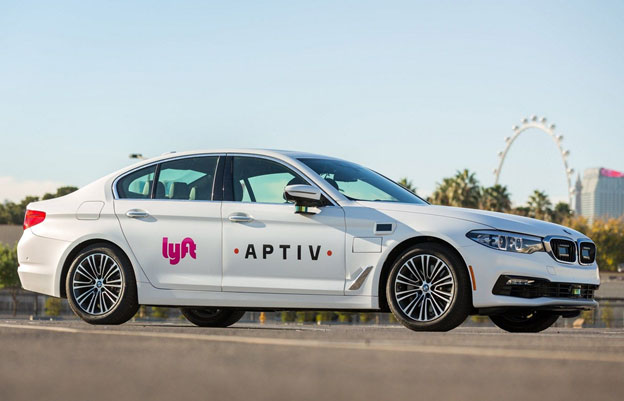 That’s right – more than 100,000 people have successfully used a self-driving Lyft, powered by Aptiv’s technology. And 98% of these customers left a 5-star rating.

What was supposed to be a one-week pilot program has become a smashing success.

And the two companies are amassing tons of data from all these self-driving rides. That data is fed back into the AI to make it smarter.

Today, Aptiv operates a 130,000-square-foot building. This serves as a command center for the self-driving fleet. That’s where the cars are housed, cleaned, maintained, and upgraded when not in use.

This tells us that the self-driving taxi service isn’t going anywhere.

And we can expect to see Lyft launch self-driving services in more cities soon. The company has been mum on its expansion plans so far, likely because it must work with municipalities and regulators to launch in a new area.

But given the success of its Las Vegas service, we shouldn’t be surprised to see self-driving Lyft vehicles buzzing around more cities in the near future.

The resurgence of 3D printing has begun…

I never thought we would talk about the Republic of Moldova in The Bleeding Edge. It’s a tiny country sandwiched between Ukraine and Romania – part of the former Soviet bloc.

A team from Biomedical Engineering at the Technical University of Moldova just developed a way to 3D print sensors that can determine the blood sugar levels of diabetics.

These sensors contain nanowires that measure the acetone levels in a person’s breath. The acetone level is directly correlated with blood sugar levels. It can be used to give diabetics the information they need.

And that means these sensors would eliminate the need for doing finger pricks to check blood sugar levels. What an amazing thing that would be for people suffering from diabetes.

What’s more, these sensors can be 3D printed in just a few minutes.

That enables a decentralized manufacturing model where the sensors could be printed at small shops close to the markets they serve. This model cuts costs and speeds up the delivery time.

Or diabetics could simply buy their own 3D printer and make their own sensors at home. Talk about convenience.

And here’s an important takeaway…

After years of stasis, we are beginning to see a resurgence of the 3D printing industry. And I believe this technology could soon go mainstream.

The COVID-19 pandemic has taught us that supply chains from centralized manufacturing models are vulnerable to “black swan” events.

The current structure is highly fragile. But a decentralized 3D printing model would be much more resilient.

Few have thought about what the world will look like after the dust settles on COVID-19. But the lessons learned during this time won’t be forgotten.

We’re on the precipice of major societal changes that are going to change how we live, work, receive health care, and manufacture and deliver products.

And while there will be many industries and incumbents who will be disrupted, there are going to be some incredible winners… the leaders in driving these changes.