Before we get to today’s issue, I want to say thank you to all the readers who signed up for my newest trading service, Early Stage Trader.

We have received overwhelming feedback on my new system for trading early stage companies. I am honored and humbled by the support. And I am just so excited to bring this system to you.

As I think you know by now, this system comes from my five-year quest to bring early stage deals to everyday investors.

Simply put, it’s a travesty that the insiders have kept all the best tech deals for themselves over the past decade. The VC firms, private equity firms, sovereign wealth funds, and high-net-worth investors have been able to access the best investments over the last 10 years. Meanwhile, regular investors have been excluded from these investment opportunities thanks to the regulations of the Securities and Exchange Commission (SEC).

I really miss the “old days” of the late 90s and early 2000s when companies went public early, giving us a chance to invest in fantastic technology companies at less than $1 billion valuations. That left plenty of room for growth and life-changing investment returns.

So I poured my heart into this thing. Early Stage Trader isn’t just another newsletter. It’s a bit of a crusade for me. I had to find a way that normal investors could still access great early stage investment opportunities that had the potential for venture capital-like returns.

For those who attended my Accelerated Profits Summit, you know I guaranteed that investors will make $151k with this system over the next 12 months. As per the Summit, the guarantee is based on investing $5,000 in each recommendation. I am relishing this challenge. It has never been done before, and I intend to deliver the results. I mean that. I track results daily.

And for anyone who hasn’t had a chance to check out the system yet, my publisher has agreed to keep our generous offer, and my $151k guarantee, open until tomorrow at midnight ET. Subscriptions are limited due to the nature of the companies we are dealing with, but there’s still time to join us. Please give it a look if you haven’t already.

You can get all the details right here.

Okay, let’s get to our tech insights…

How Lyft solves its R&D problem…

In the ride-hailing arena, Lyft is the David to Uber’s Goliath. Uber did $11.3 billion in revenue last year. The company is sitting on $5.7 billion in cash.

Lyft, on the other hand, did $2.2 billion in revenue last year. It has just over $1 billion in cash on the books… And it’s burning through $1.6 billion per year. That’s a stark contrast.

Because of this, Lyft can’t afford to invest in research and development (R&D) anywhere near the scale of Uber. It has to focus on getting to free cash flow positive as soon as it can… Otherwise, it’ll be out of money.

But R&D is a technology company’s lifeblood. Lyft can’t ignore it completely and expect to survive. That’s where crowdsourcing comes in…

That’s big. Lyft is one of the few companies on Earth with a self-driving car fleet on the road right now… And it made data from those tests public.

And the reason is that it wants to crowdsource innovation. It is hoping somebody will use these data to optimize its self-driving technology… And, of course, Lyft will pay handsomely for useful innovations. I’m sure it will also offer a high-paying job to anyone able to develop something worthwhile.

Now, we may ask… if someone can optimize Lyft’s technology, why wouldn’t that person use it themselves? Why sell it back to Lyft?

And the answer is because Lyft has the equipment and the infrastructure in place already. It has already poured more than $7 billion into getting the company up and running.

Plus, launching self-driving services is challenging. GM’s Cruise Automation, which I’ve written about before, just delayed its launch plans. It is struggling with its tech. It’s just not ready yet.

So it would be nearly impossible for an individual to take Lyft’s data and launch a competing company. It would be far easier just to take a reward from Lyft for the work… or potentially even join the team that is making the technology a great success.

That’s why crowdsourcing is a smart move for Lyft. It’s a great way to solve problems quickly on a tight budget. It’s a way to find great employees. And it’s a win-win for the parties involved.

We can expect to see a lot more crowdsourcing in the tech industry as a way to solve complex problems quickly. It represents a big shift in how companies innovate. And I view this as a part of a larger shift happening in society and in work. In other words, it’s a “fourth Industrial Revolution.”

I’ll elaborate much more on that in future issues…

The Game of Drones…

And back in May, Google’s Wing Aviation division was the first to get FAA clearance for drone deliveries.

Now, the news is out that UPS just filed its application with the FAA for drone deliveries. In addition to packages, I’m being told that UPS intends to deliver fresh food by drone as well. 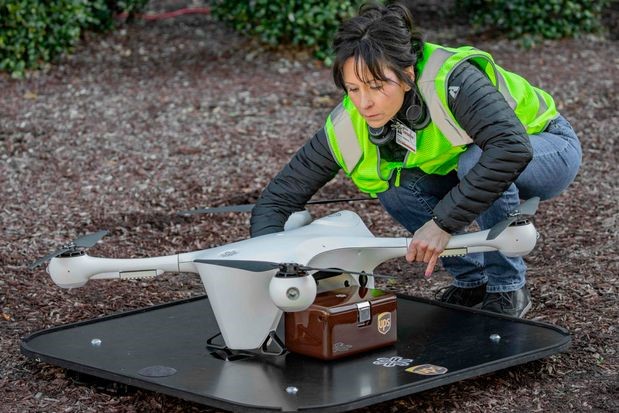 Obviously, it’s a race to commercially launch drone delivery services. The Game of Drones is on.

And it won’t take long…

These are three massive companies with a ton of cash and developed products. And they know drone delivery is the future, especially in the suburbs and more rural areas. That’s why they are moving fast on this trend. It is a more cost-effective way to deliver packages even faster than what is possible today.

It may sound crazy, but it’s just a matter of months before certain parts of the country start to see drone deliveries.

Last month, we talked about how Apple (AAPL) was angling to acquire Intel’s German wireless modem unit. That news came just months after Apple agreed to use Qualcomm’s (QCOM) wireless modems in its 2020 iPhone models.

And remember, the wireless modem is what connects devices to a wireless network. This is Qualcomm’s primary business… that and royalties (licensing fees) from wireless technology intellectual property.

Well, it appears the deal is done. Apple will buy Intel’s wireless modem unit for $1 billion. That’s a good deal…

If we remember, Intel bought this unit for $1.4 billion from Infineon back in 2010. Intel couldn’t make it work though, and it is taking a $400 million haircut. This is yet another badly managed acquisition for Intel.

Clearly, Apple wants to get away from Qualcomm. With this acquisition, it will develop its own modem chipsets in-house.

We can expect Apple’s new chips to be ready by 2021 or 2022. I’m certain that Apple wants to do it as quickly as possible. Apple will uphold its agreement to use Qualcomm’s modems in its 2020 iPhones – its own modem won’t be ready in time for next year. But within a year or two after that, it should not have to buy from Qualcomm anymore.

Apple still will have to pay royalties for its use of Qualcomm’s wireless patents. But otherwise, the relationship will cease… And that’s not good news for Qualcomm.

Apple has been one of Qualcomm’s biggest customers. When Apple ditched Qualcomm’s modems for Intel’s in 2018, it took 50 million modem orders off Qualcomm’s books… instantly dropping revenue 20% year-over-year for 2019 Q1.

Qualcomm’s efforts to expand its business beyond its core wireless technology business have been dismal failures. Past acquisitions in screen technology and data center-centric semiconductors are two perfect examples. And its bid to acquire NXP Semiconductors failed. Worse yet, Qualcomm completely missed the megatrend of developing semiconductors targeting artificial intelligence, machine learning, and autonomous driving technology.

As I said last month, investors should avoid QCOM. And that remains true today. The stock is trading at the top of its valuation range right now… And that won’t last.