Tonight is the big night.

At 8 p.m. ET, Jeff will share all about NFTs… including his favorite NFT coin to play this booming technology trend.

And tonight only, attendees will have the chance to receive their very own NFT. This is a special collection designed by the team at Brownstone Research.

There are only a few hours until we go live. If you haven’t yet, please reserve your spot for tonight right here. You don’t want to miss this event.

Back in 2017, JPMorgan CEO Jamie Dimon had some choice words for bitcoin…

“If you’re stupid enough to buy it, you’ll pay the price for it one day.”

Back then, many agreed with him. The blockchain industry was widely misunderstood. The digital asset was called a “scam,” a “Ponzi scheme.” Some even said that its true price “might be zero.”

But I saw something different. I saw a decentralized, permissionless asset supported by a radical technology.

I had first profiled bitcoin in 2015. And in 2017, we officially added it to our Near Future Report portfolio.

I’m sure we know what happened next… 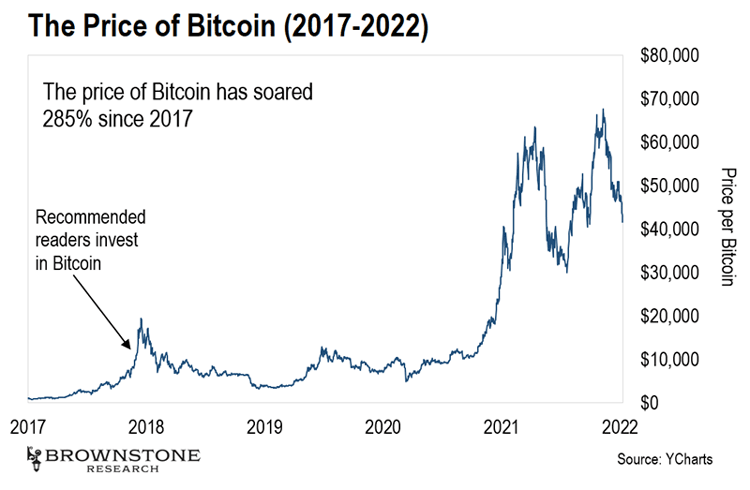 Bitcoin and other digital assets are now regarded as legitimate investments. There are now several bitcoin futures ETFs. And the asset is held on the balance sheets of major companies like Tesla, MicroStrategy, and Block (formerly known as Square).

As for Jamie Dimon? He’s singing a different tune about bitcoin now.

Ironically, JPMorgan recently became the first major U.S. bank to provide its clients with access to bitcoin and other cryptocurrency funds.

Talk about a change of heart…

I tell this story because we’re seeing something similar happen with innovation in the blockchain space. And ignoring this technology today would be like passing on bitcoin in 2012.

The Latest Megatrend in Digital Assets

2021 was the year that a unique class of digital art and collectibles… enabled by the rise of blockchain technology… finally hit the mainstream.

NFTs are digital assets that are cryptographically secured and authenticated on a blockchain. They can include everything from digital works of art to audio recordings, videos, and much more.

And just like bitcoin in 2012, NFTs are hitting a major inflection point right now.

In 2021, global marketplaces like OpenSea and Crypto.com experienced a surge in sales volume as more users began to snap up NFTs. Total sales for NFTs on the Ethereum blockchain exceeded $23 billion last year alone.

Individual investors, venture capital firms, and even legacy financial institutions are investing millions in this megatrend as I write.

And just like bitcoin in its early years, we’ve likely seen a lot of mocking coverage directed at NFTs over the past year. Those detractors will be proven wrong… again.

NFTs represent a revolution in the art and collectibles market. And what few see is that the applications for this technology go beyond just digital collectibles.

At a high level, NFTs are a way to authenticate and represent ownership of a digital asset using blockchain technology. Right now, we’re seeing ownership of digital artwork being conferred using this technology.

But NFTs are part of a larger trend known as “tokenization.”

Tokenization is a way to represent ownership of an asset. In this way, it’s similar to the process of securitization we see with stocks. The difference is that tokenization uses blockchain technology to confer ownership. And the types of assets that can be tokenized are nearly limitless.

Let’s imagine a piece of property like our house. Typically, one person would be the sole owner of that asset. Maybe your spouse is also on the title, but that’s usually where it stops.

But if we were to tokenize that home, fractional ownership could be conferred to hundreds or even thousands of token holders. The value of the tokens would fluctuate just like any other security.

That’s just one example. Now imagine tokenizing commercial property, rare cars, jewelry, or even racehorses. Anything of value can be tokenized and traded.

How To Profit From This Lasting Megatrend

New technologies are rarely appreciated right away. Bitcoin – as we saw – was not well understood during its early years. Even revolutionary technologies like the internet were widely panned at one time.

NFTs are experiencing their “bitcoin moment.” These assets are misunderstood – or even mocked – by many investors. As the market matures and the applications of this technology are better understood, that will change.

But for investors, the time to get exposure is right now. That’s why I’ve dedicated my first investment summit of the year to NFTs.

And tonight is the night.

I’ll share a group of NFT coins that represent one of the most exciting ways to play this exciting area of blockchain technology.

Tonight, I’ll give away the name of one of my favorite NFT coins. And I’ll even give away a series of NFTs we designed ourselves at Brownstone Research, for free.

To learn how to claim your free NFT – and the name of my NFT coin recommendation – reserve your spot right here. You don’t want to miss this.

I’ll look forward to seeing you there.